Good morning, Chairman Eklund, Ranking Member Thomas and members of the committee. My name is Caitlin Johnson and I am the communications director at Policy Matters Ohio, a nonprofit, nonpartisan organization with the mission of creating a more prosperous, equitable, sustainable and inclusive Ohio. Thank you for the opportunity to testify. I’m here to today to talk about the role Facebook and Google have played in undermining the news industry, and the role they can play in supporting it.

This July, Policy Matters released a report on Ohio’s newspaper industry. Newspapers are important threads in the fabric of our communities. They tell us when a neighbor dies, whether a new restaurant is worth visiting and which high school won the basketball game. They uncover and explain our community’s most serious issues. In 2017, the Cincinnati Enquirer dispatched more than 60 reporters, photographers and videographers to chronicle “an ordinary week” in the lives of people touched by the drug crisis, earning a Pulitzer Prize.[1] Tireless reporting at the Cleveland Plain Dealer exposed the lead poisoning crisis harming the city’s children – especially those who are poor and black – and the city’s lackluster response.[2]

In 2018, The Youngstown Vindicator mapped the connections between public officials embroiled in a corruption investigation, including a former mayor.[3] The mayor will stand trial next year.[4] The Vindicator officially closed in August, although The Warren Tribune Chronicle bought the circulation list, the website and the masthead and hired several Vindicator staff. In the 1970s the Vindicator reached more than 100,000 every day and 160,000 on Sunday. Before it closed, those numbers slipped to 25,000 and 32,000, respectively.[5] While it’s certainly helpful that the Tribune Chronicle stepped in, its newsroom staff for the whole Warren-Youngstown area is no greater than the Vindicator’s was on its own.

The Vindicator is just the latest casualty in Ohio’s fading newspaper industry. Today, Ohio has 32% fewer newspapers than it did in 2004, according to the University of North Carolina School of Media and Journalism.[6] This is happening for a number of reasons. The one I want to discuss today is the rise of digital media – especially Facebook and Google.

In 2018, total digital advertising revenue topped $100 billion, up by 22% compared to 2017.[7] Classified advertising, once a key contributor to newspaper revenues, fled years ago to Craigslist and elsewhere. As Americans increasingly turn to free news online, newspapers haven’t been able to make money off the digital add boom. Facebook and Google, not news outlets, are the big winners, by some reports raking in a combined 60% of U.S. digital ad revenue last year.[8] That number jumped to 77% in local markets.[9] In some cases, digital platforms could be directly contributing to putting newspapers out of business. A recent study from Journal of Financial Economics found that when the classified ad website Craigslist expands into a new city, the likelihood that a newspaper will close goes up by 10 percentage points.[10]

Independent publishers, like the family who owned the Vindicator, struggle to make a profit. Big media companies – some run by hedge funds – swoop in and gobble up papers, consolidating operations within the state and outsourcing some operations to hubs located elsewhere. Ohio has been ground zero for newspaper mergers and consolidations. That trend is likely to intensify with GateHouse Media - owner of the Columbus Dispatch, the Akron Beacon Journal and others – making a play to purchase Gannett, which owns the Cincinnati Enquirer and 10 other Ohio papers.[12] After such mergers, many newspapers become “ghosts” of their former selves, struggling to cover local news with reduced staff.[13]

Many newspapers that remain struggle to cover local news with reduced staff. Ohio’s newspaper industry as a whole—which includes upper management, advertising and circulation employees, clerks, truck drivers, and more, in addition to the standard newsroom staff—has hemorrhaged jobs. Ohio had 15,643 jobs in the newspaper industry in 2004. In 2017, there were 6,506. That’s a loss of more than half of the industry in less than 15 years. 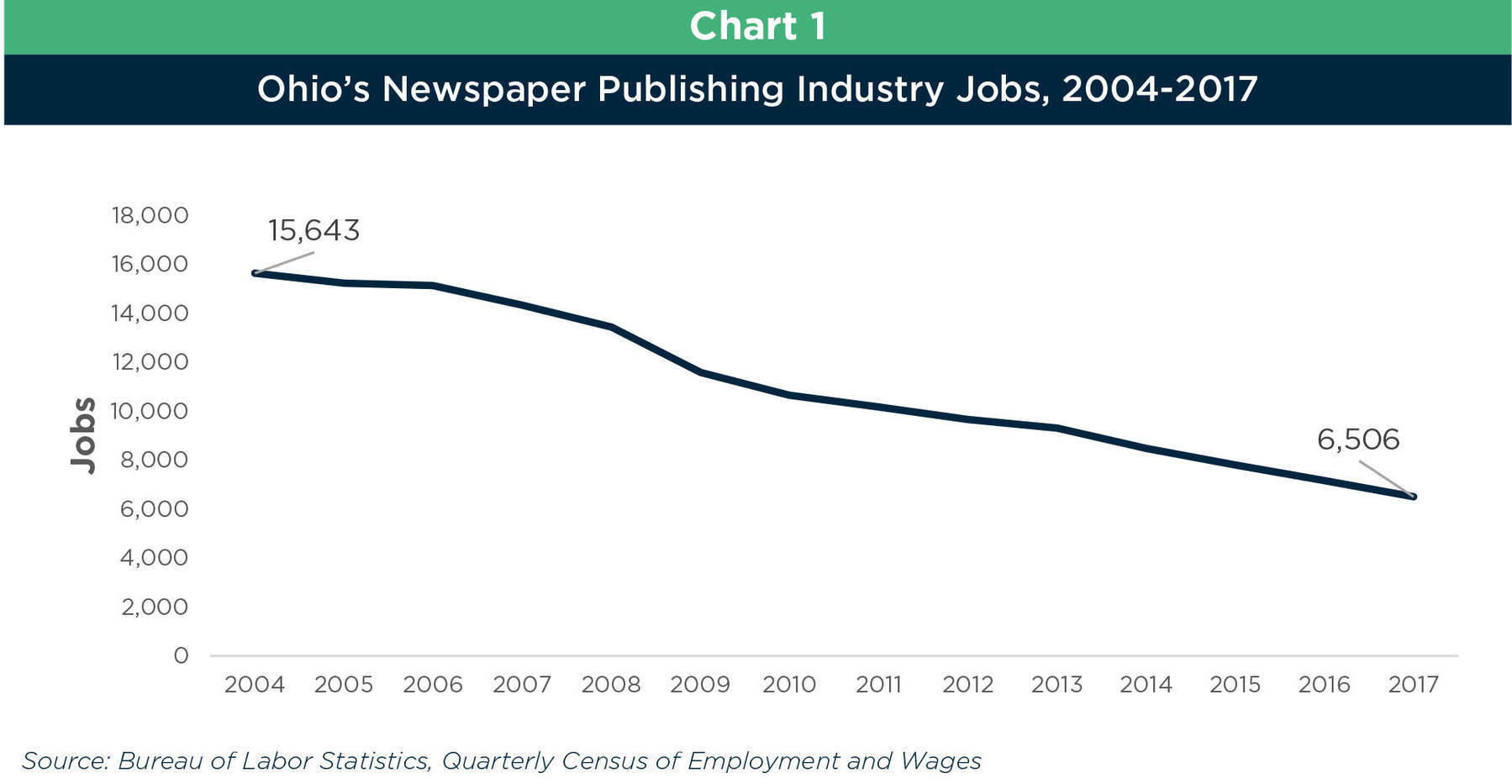 The core of the newspaper publishing industry is the newsroom staff; these are reporters, editors, photographers and designers. They gather, write and edit the news and present it to the public. In 2018, 1,640 employees worked in Ohio’s newsrooms, compared to 2,870 in 2012; that’s a drop of approximately 42.9% (or 1,230 jobs) in just six years. And that doesn’t account for earlier cutbacks which already had reduced newsroom staff. Without sufficient staff, even the newspapers that have evaded shutdown are seriously struggling to perform like they used to.

Local digital news operations are growing; there are now 500 nationally. After the Vindicator closed, Google joined forces with media company McClatchy to found Mahoning Matters, which employs five journalists including some former Vindicator staff. These kind of projects are important and helpful, but they don’t replace the newsgathering capacity of local newspapers. They also present funding challenges and tend to be more viable in wealthier communities.[16]

Facebook and Google suck valuable advertising dollars away from newspapers and their websites. In turn, they are filling the void they’ve helped create with “fake news.” A study from New York University found that about 8.5% of Facebook users studied shared at least one fake news link, with older adults being at particular risk of sharing false information.[17] A study from the University of Oxford found that "evidence of organized social media manipulation campaigns…have taken place in 70 countries, up from 48 countries in 2018 and 28 countries in 2017. In each country, there is at least one political party or government agency using social media to shape public attitudes domestically.”[18] Google ads are helping prop up click bait sites. A UK nonprofit, the Global Disinformation Index, analyzed 1,700 disinformation sites and found that Google placed automatic ads on 70% of them.[19]

We need national policies to combat these trends. That includes a federal tax on multi-billion-dollar online platforms like Facebook and Google that could be used to create an endowment to support independent journalism. But there are still steps Ohio lawmakers can take.

Despite widely reported bad behavior, the state of Ohio helps Facebook, Google and other big tech firms rake in profits with tax breaks for their data centers. Google is getting $43.5 million and Facebook $37 million, each for new data centers in New Albany. These incentives exempt them from sales tax on purchases of hundreds of millions of dollars of equipment and extend over decades. These facilities employ comparatively few workers; Google and Facebook promised 30 and 50 jobs, respectively.[20]

The state of Ohio recognizes the importance of journalism, providing funding for the Statehouse News Bureau and public broadcasting. As Facebook and Google’s influence grow, the newspaper industry at large will likely continue to struggle in coming years. Several policies can help ensure Ohio’s communities don’t go without good journalism.

[9] Hagey, Keach, Lukas Alpert, and Yaryna Serkez. "In News Industry, a Stark Divide Between Haves and Have-Nots." The Wall Street Journal, May 9, 2019. https://on.wsj.com/2Gsuir8.

[13] Abernathy, P., “The Expanding News Desert” The Center for Innovation and Sustainability in Local Media School of Media and Journalism University of North Carolina at Chapel Hill. 2018. http://bit.ly/2XVLvz9.