Ohio’s unemployment rate has hovered below 5 percent for more than 10 months. The state has recovered the jobs lost during the 2007 recession. Yet, wages are moving in the wrong direction. Nationally, real wages have fallen 0.2 percent over the year. For production and nonsupervisory workers, about 82 percent of the private sector workforce, the decline has been worse (0.4 percent). The median wage in Ohio was more than 2 percent lower than the nation’s in 2017. Wages are not rising enough to keep up with inflation.

One suggested explanation for the wage problem is that the jobs added during the recovery were low-wage. This was true during the recovery’s early years. The following charts prepared by the Economic Policy Institute show job growth by wage levels. The bar shows the change in jobs at a particular wage and the dot is what job growth would have been at that wage if jobs had grown at the same rate across the wage spectrum. If a bar is taller than the dot, jobs at that wage were growing faster than average. If the bar is lower than the dot, jobs at that wage were growing slower than average. As Figure 1 shows, from 2010 to 2013, Ohio was still struggling with losses and the job growth benchmark was at or near zero. The jobs paying the lowest wages—under $12 an hour—were the jobs primarily driving growth. 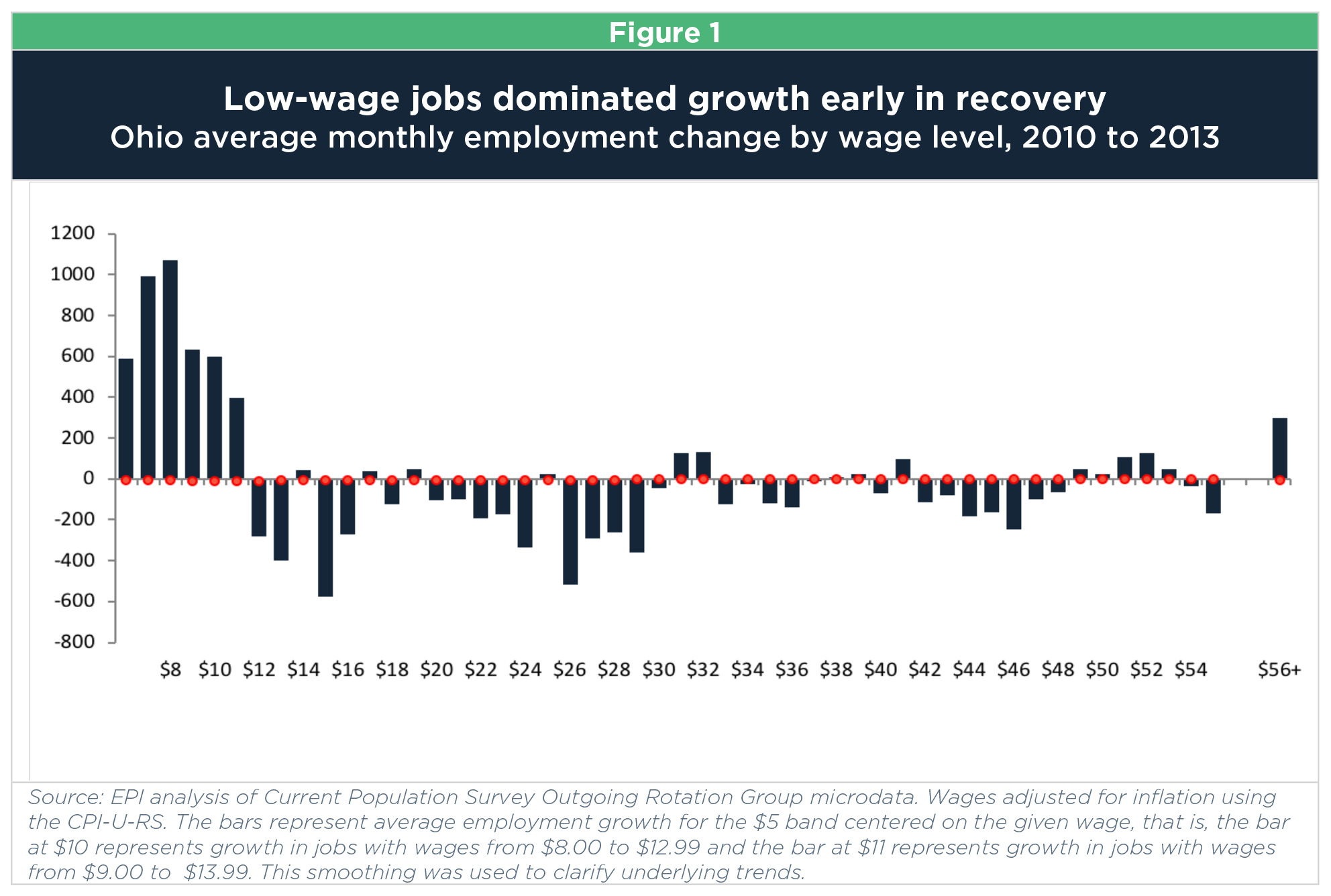 The second figure, covering the later years of the recovery, shows a different story. Jobs paying below $12 an hour declined, while jobs in the $12 to $18 range grew more quickly. Workers earning a wage in this range would be marginally better off than those working a minimum wage job, but would likely still struggle. Jobs paying about $30 or higher also generally grew slightly better than average, a clear positive. 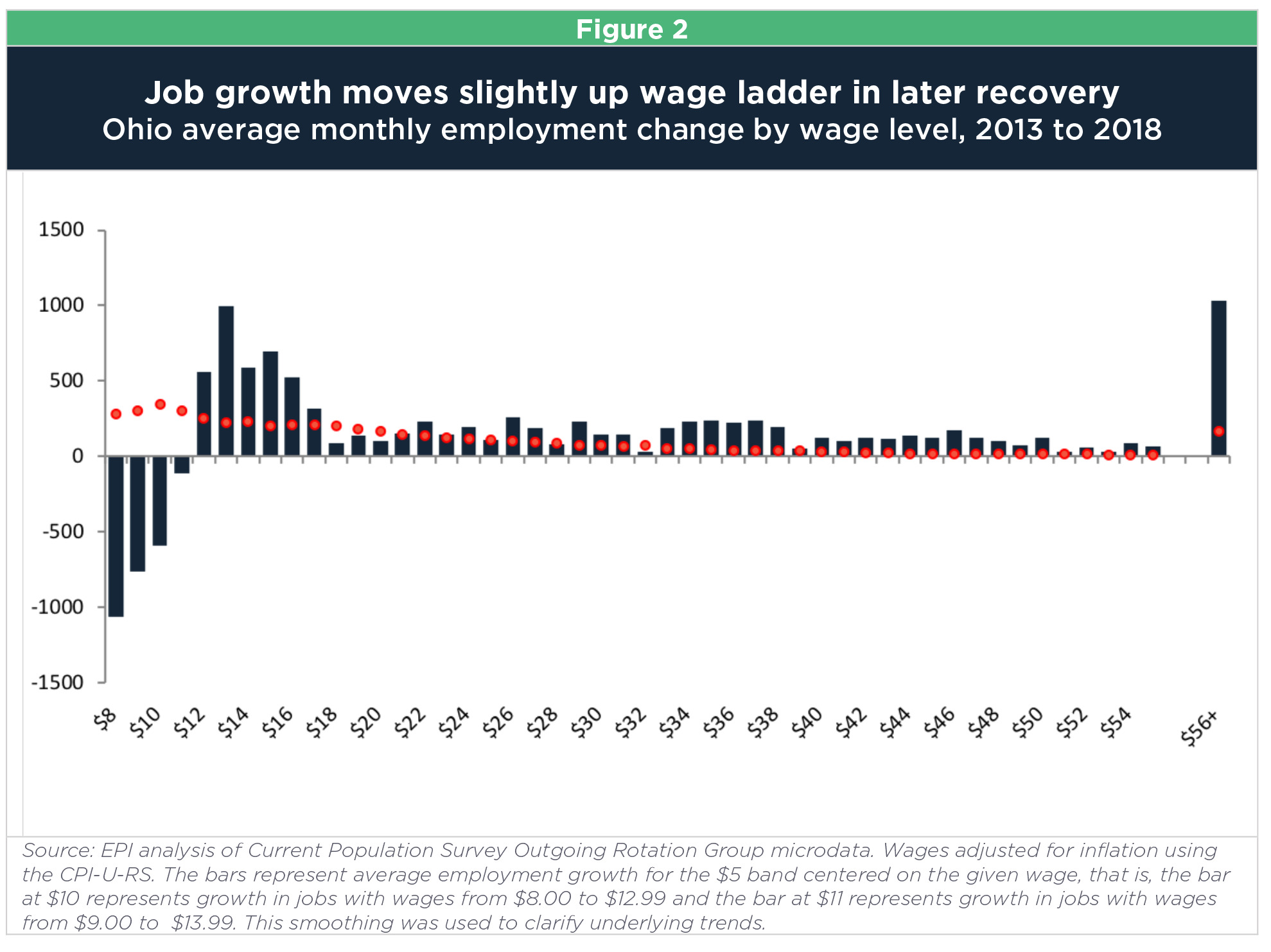 This wage data supports what we’ve seen in the jobs data. Ohio has seen slow job growth throughout the recovery period. This includes job growth in blue collar sectors of manufacturing, construction, and mining, which have historically provided middle-class wages, benefits, and stability. Ohio has added work in each of these sectors throughout the recovery. Specifically, there are 14,300 additional jobs in construction, 12,400 in manufacturing, and 1,600 in mining and logging since January 2017. All but the manufacturing sector have recovered the jobs lost to the 2007 recession, but none have recovered the number lost since 2000. Unfortunately, the wage distribution data suggests merely targeting sectors for growth will not address the state’s wage conundrum. Instead, as EPI found for the nation as a whole, wage growth is stagnant or sluggish within a broad section of job types.

Blue collar work has shifted in Ohio and the nation over the last couple of decades. This means Ohio’s wage ills are not just a consequence of the most recent recession but a broader reflection of changes in the labor market. As Figure 3 shows, six in 10 of the state’s most common occupations pay a typical worker less than the same sector paid in 2000. Additionally, six in 10 of Ohio’s most common jobs pay less than what a family of three would need to escape food stamp eligibility levels. That means these jobs pay less than $27,014 a year, or less than $13 an hour with full-time, year-round work. 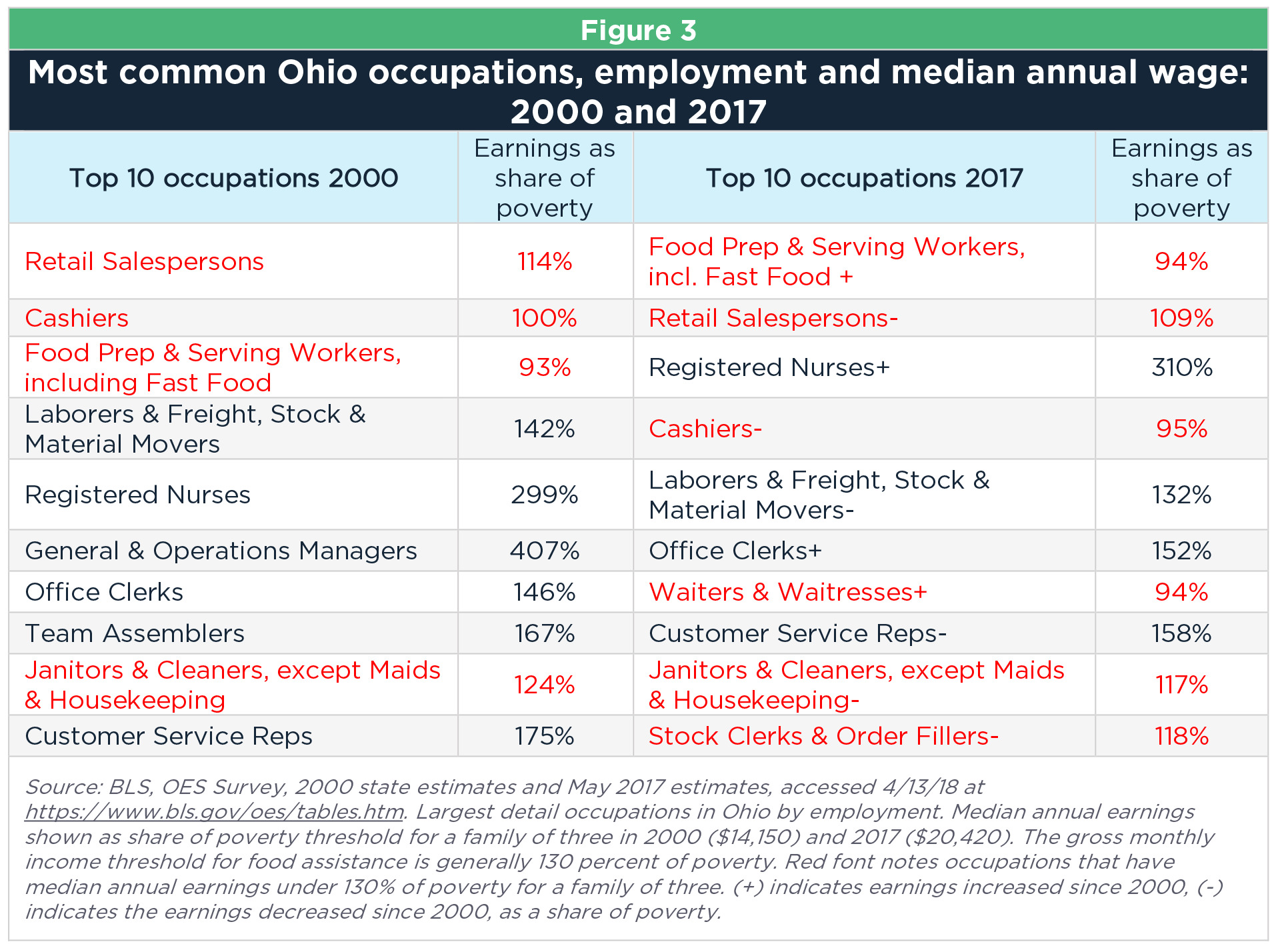 The state took little action to encourage stronger wage growth, particularly for low and middle wage workers. Instead, policymakers focused on attacking worker bargaining power, and enacting tax cuts and business incentives to stimulate the post-recession state economy. This strategy did little to create robust job growth or to address the deeper inequalities in Ohio’s economy. In fact, the strategy has exacerbated inequality. Figure 4 is similar to the first two charts in this brief, but it covers the entire period of 2010 to 2018 instead of breaking it into two as the earlier charts did. It shows that those at the top of the wage scale and those close to the very bottom have seen more job growth across the entire recovery, while there were fewer jobs added paying wages between $18 and $30, an important rung on the economic ladder. 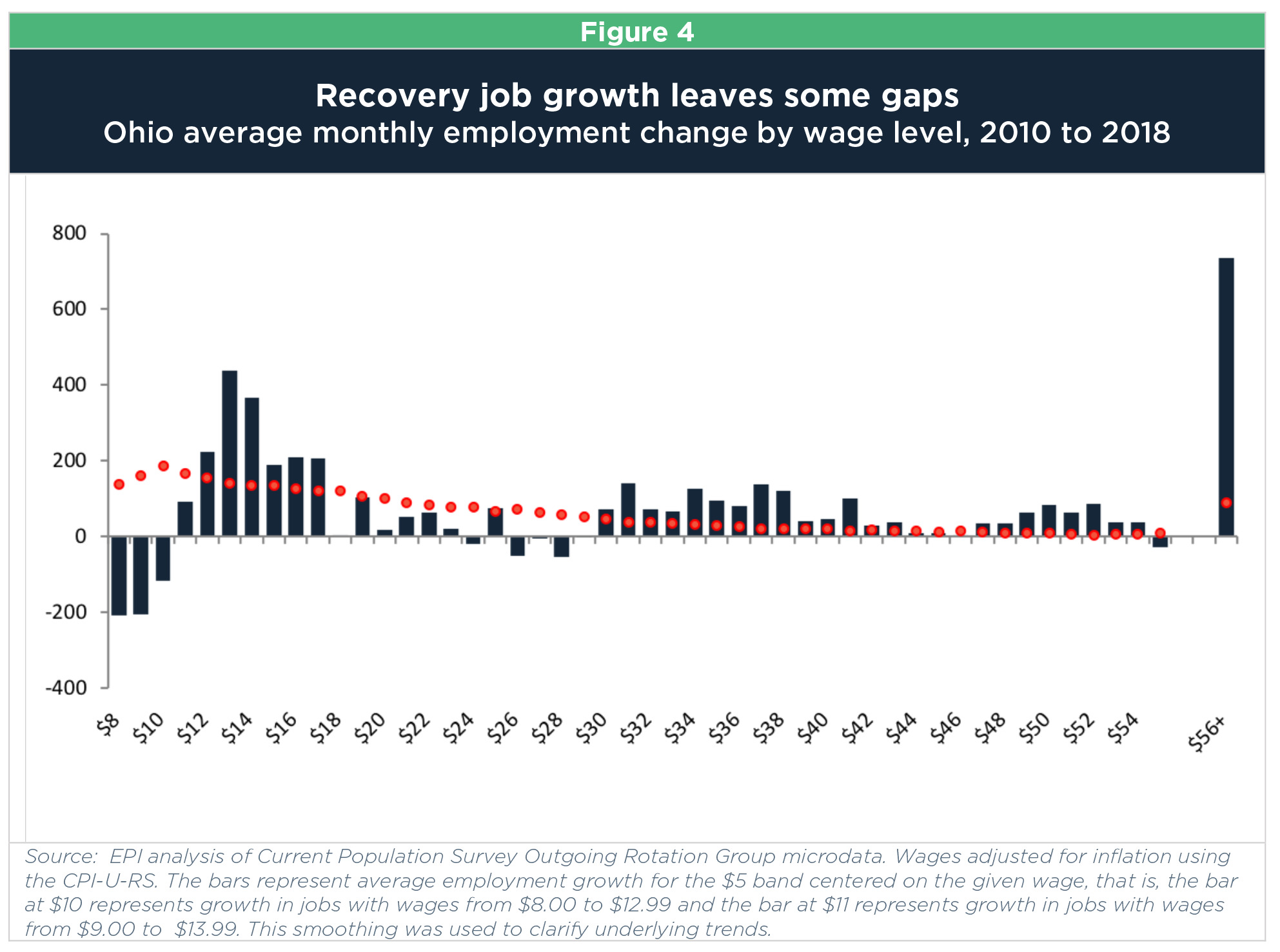 A second explanation offered for slow wage growth in Ohio is the so-called “skills gap.” Some argue that many well-paying jobs go unfilled because workers do not have the right qualifications for the openings. While it is certainly true that some employers struggle to fill jobs, this is likely due to a variety of factors such as location, the state’s underinvestment in addiction treatment, failure to pay enough to attract workers, or hiring practices that exclude workers who have the skills, but differ from “typical” workers in the industry because of criminal history, gender, or race. What seems less likely based on data is that the skill gap is suppressing wages, or the cause of our slow recovery.

Table 1 shows typical education required in the Ohio occupations that will have the most annual job openings, according to the Occupational Projections data from the Ohio Department of Job and Family Services. A third of the openings will require no formal education or credential. This includes jobs in food service, retail, home health, laborers, and janitors. These occupations currently employ big shares of Ohio workers. Many will require on-the-job training. Nearly a third will require a high school diploma or the equivalent. This includes office clerks, customer service representatives, maintenance workers, and team assemblers. Just 23.8 percent of openings will require a Bachelor’s degree or higher, with top openings for registered nurses, general and operations managers, accountants, and teachers. 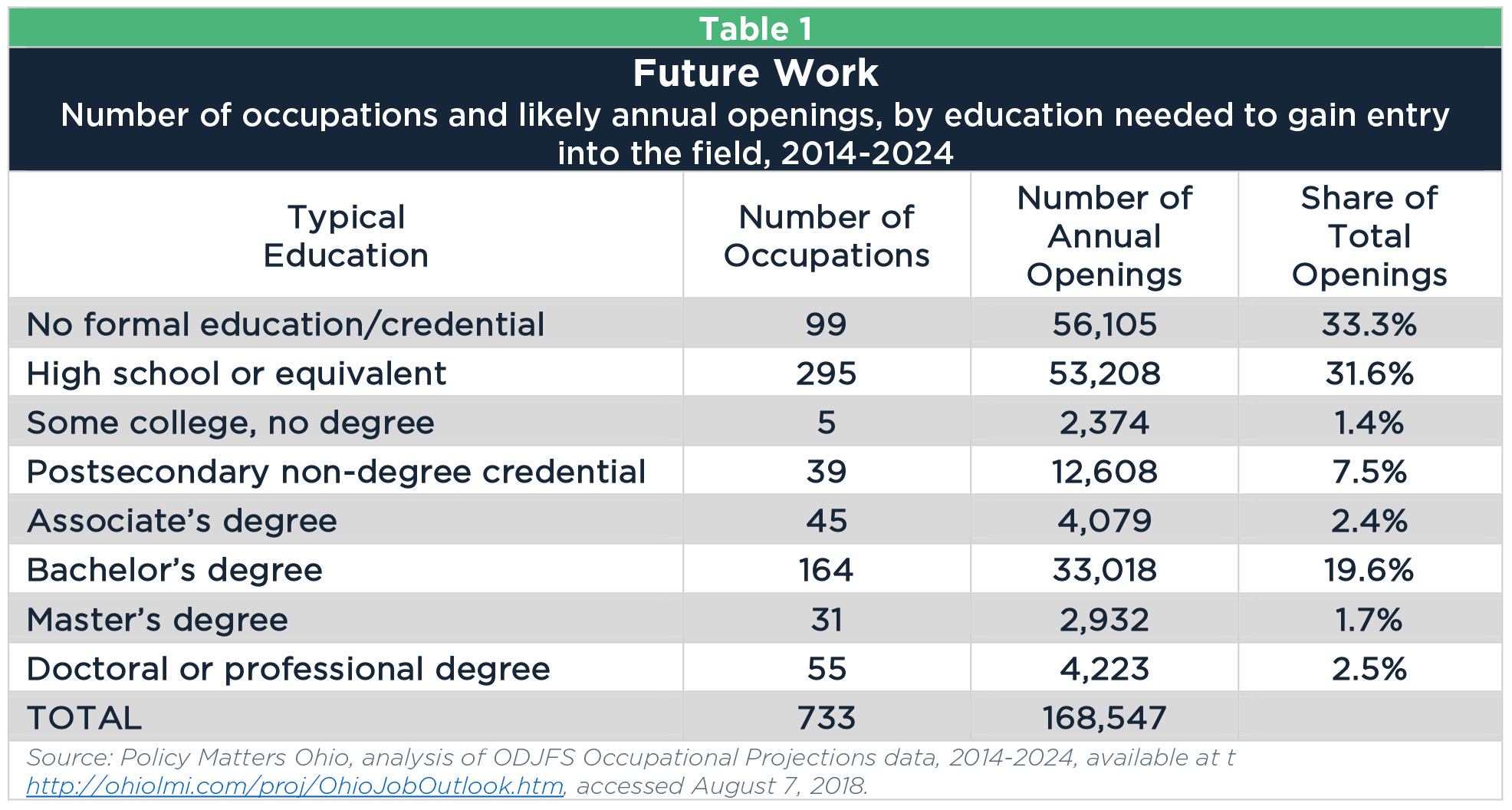 The real crisis is that too many of Ohio’s projected openings will be in occupations that don’t pay enough for a typical worker to keep a small family financially self-sufficient. The vast majority, 63 percent of projected openings, are in occupations that pay a median wage for full-time, year-round work that keeps a family of three at or below 200 percent of poverty. More than 38 percent of openings pay a median wage that keeps a family below 130 percent of poverty, a typical threshold for food assistance eligibility. While there are likely decent jobs that need specific skills that are going unfilled, the bulk of openings in Ohio are neither decent nor dependent on specific credentialing. Figure 5 shows the share and number of annual openings grouped by median annual wage as a share of poverty for a family of three. 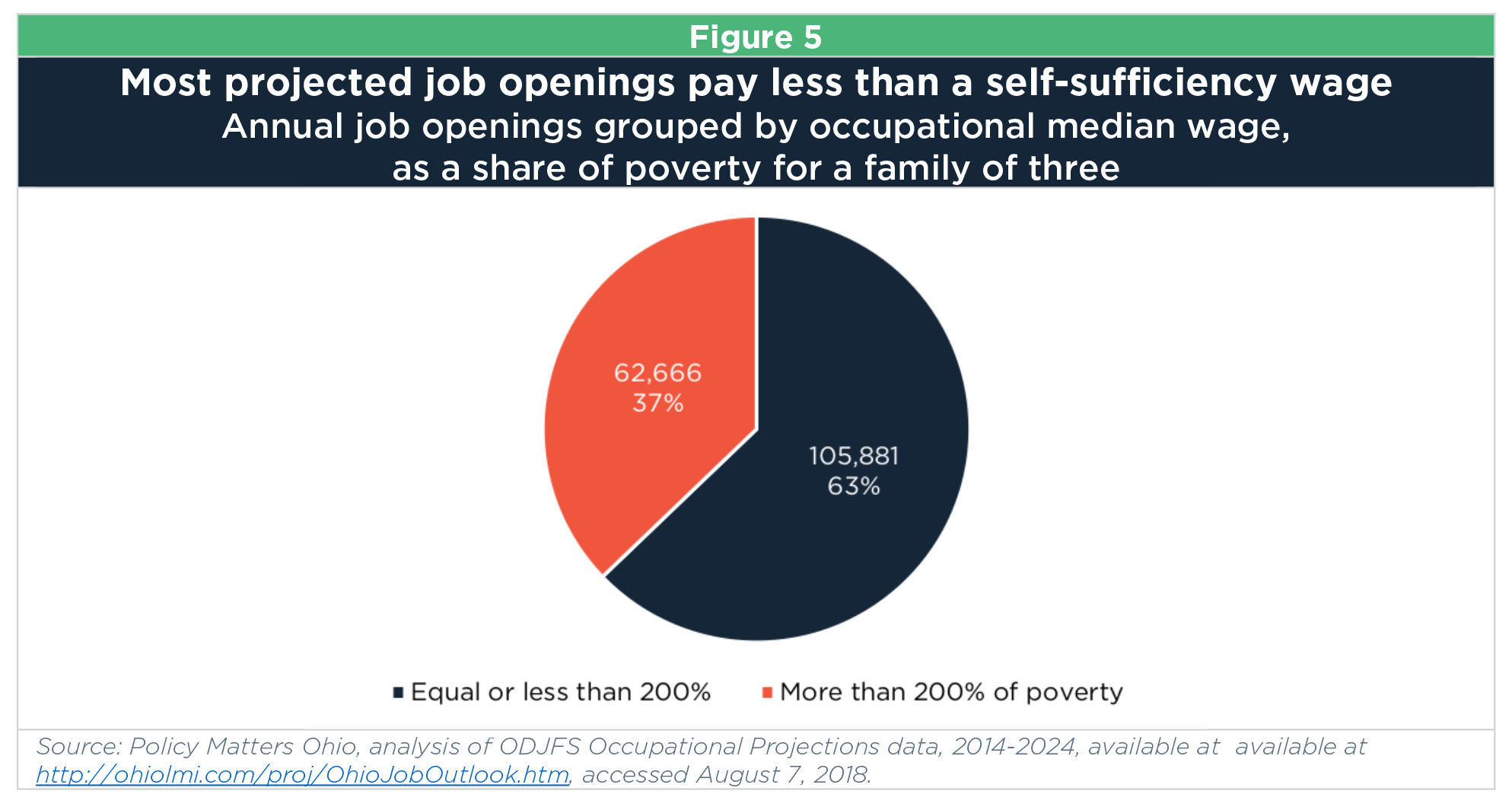 Hyper-focus on solving just the so-called “‘skills gap”’ or specific employer concerns allows policymakers to avoid addressing workforce policy that keeps many workers from stability, never mind economic advancement. Neither job growth nor job training alone can rebalance wages in the state. To build an economy that works for all we have to enact policies that support all working people, across race, gender, and educational level. Our report, A New Way Forward for Ohio’s Working People, details 10 ways to restore that balance. These policies, summarized here, will restore worker bargaining power, the minimum wage, and the 40-hour work week to help rebalance Ohio’s economy: