Last Friday marked the last day of operations at the General Motors (GM) Chevy Cruze plant in Lordstown, Ohio. The closure of the Lordstown plant is likely to have a ripple effect across the state. Already, GM suppliers, Lordstown Seating, Comprehensive Logistics, and Leadec Corporation, have filed notice of mass layoffs directly citing the Lordstown closure.[1] Those filings add more than 750 to GM’s own toll of around 4,500 workers since layoffs began in January 2017. They may be only the beginning: the Center for Automotive Research (CAR) found that automakers have a multiplier of 7.6, creating an additional 6.6 jobs for every direct employee.[2] The Drive it Home campaign says that 35 percent of Cruze parts are made in Ohio.[3] 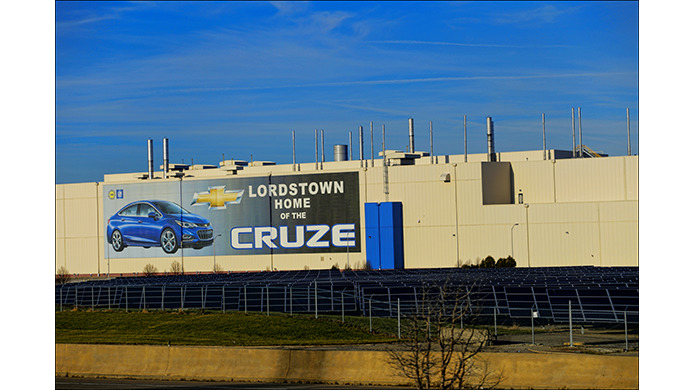 The ultimate fate of Lordstown could be unclear for months. The Collective Bargaining Agreement remains in force until September, and contract negotiations with the United Auto Workers could include provisions to reopen the plant. Already, the UAW has filed suit to enforce the rule that displaced workers get transfer opportunities in other GM plants before the company hires temp workers; and a separate suit challenging GM’s authority to shut down under the contract. Abruptly last month GM announced the delay of shut-down at the similarly fated Detroit Hamtramck plant, and Ohio lawmakers at the state and federal level are scrambling to find an intervention for Lordstown.[4]

What is clear is that Lordstown is a major economic force in the Mahoning Valley, which has already weathered a heavy toll from decades of deindustrialization, mostly in the steel industry it once dominated. Its success has hinged on the 4,500 workers who built the Cruze before layoffs began in January 2017.[5] Last year, J.D. Power ranked them GM’s most productive auto workers in North America.[6] The company has also been the beneficiary of generous state and federal subsidies, such as the federal bailout and infrastructure investments, including in Lordstown. The decision by GM management to shutter the plant, at a time when GM remains profitable, raises important questions about what can be done to protect workers and communities against an extractive management culture that seeks out public supports and does little to reciprocate community investments.

GM management blames changing consumer tastes for its decision to close down the Cruze plant, as though Lordstown fell victim to some inexorable force of nature. Manufacturing expert Susan Helper makes clear that instead, the Cruze plant was slated for closure because of deliberate management decisions and bad public policy.[7] GM has excess capacity to make the Cruze, but that comes on the heels of increased investments in Mexico, where GM is now the largest automaker. Workers there make just $3-$5 per hour and enjoy scant protections from U.S. trade policies that facilitated the production transfer. Among layoffs are GM’s powertrain engineers, who could instead be retrained to work on new electric cars that GM is developing. Instead of retooling Lordstown to make cars expected to be in demand, including electric cars, GM spent $14 billion in stock buybacks in the last five years: buybacks which would previously have been illegal and which Helper calls a grievous failure of public policy. These actions may ultimately prove destructive to GM’s own bottom line. In any case, they are disastrous to the workers and communities that will lose production facilities they have helped to make successful.

Better Federal policies might have prevented Lordstown’s closure. A substantial gas tax would reduce carbon waste and could be used to smooth fuel prices to make them more predictable. Today, automakers face a high stakes gamble in predicting future fuel prices. Last week the Chevy Cruze fell victim to dwindling consumer demand from low fuel prices: a decade ago GM shut down the Moraine truck and SUV plant, again citing low consumer demand, that time due to high fuel prices.[8] Building labor protections into our trade policies could both stem the flow of jobs to locations with the weakest safeguards, and improve living conditions for workers employed by our trading partners. The Center for Economic Policy Research concludes that Mexican economic growth “collapsed” after 1980 and wages have not improved under NAFTA. The SEC should reimplement the prohibition against corporate stock buybacks.[9] GM sunk $14 billion in the last five years into stock buybacks which were illegal for most of the 20th century as a form of price manipulation before the SEC under President Reagan changed the rule in 1982 to destructive effect.[10] Stock buybacks pump up the price of stocks, creating profits for executives and shareholders without creating any new value for the economy: companies like GM sink billions into them and then come begging for infrastructure spending from state and local governments.

Better state policies could prevent some large-scale layoffs, and provide better support for workers when layoffs occur. Ohio should:

Extend the Art Modell Law to other businesses. Ohio’s Art Modell law requires professional sports teams to give at least six months’ notice of intent to leave, and give locals the opportunity to buy the franchise.[11] It provides a model that could be used for other kinds of businesses as well, possibly including Lordstown. Passed after Cleveland Browns owner, Art Modell, moved the team to Baltimore to become the Ravens, the Modell law was used to challenge a planned relocation of the Columbus Crew soccer team when now Governor Mike DeWine led a successful lawsuit as Attorney General. Ohio’s legislature should extend the Modell law to all businesses that receive public incentives in the form of tax abatements from the state or a local government.

Strengthen state WARN Act protections and enforcement. The Federal Worker Adjustment and Retraining Notification (WARN) act requires large employers to give 60 days advance notice to the state and workforce before closing or laying off a large number of workers. States have used the advance notice to successfully prevent plant closures through Rapid Response teams that can help firms to identify strategies to remain in operation. When these efforts fail, the WARN act provides for resources to retrain workers. Ohio follows the federal WARN act, but many states have stronger protections of their own. Ohio should implement a statewide WARN policy that extends the notification window, includes smaller firms and layoffs, provides severance pay for displaced workers, and empowers the state to prosecute violations.[12] Additionally, the state must examine how and whether the economic development infrastructure mostly housed at JobsOhio is targeting these firms for layoff aversion assistance. Does JobsOhio respond with assistance in finding new owners, or new ownership structures, or new clients for suppliers? Economic development should not be about smokestack chasing and competing against neighboring states for relocating business. The state needs an aggressive and comprehensive set of strategies for mass layoffs that center on workers and the community.

Support union organizing. Lordstown workers have suffered a difficult loss and many will struggle to find footing. Yet provisions built into the Collective Bargaining Agreement will provide some protections. Under the contract, more than 700 Lordstown workers have accepted transfer jobs to other facilities. And the union may give workers some leverage to extend the life of the plant. Workers being displaced from jobs with many GM suppliers lack these same protections. Ohio can strengthen union organizing by remaining a free bargaining state. The state and communities can use procurement policy to give preference to firms that agree to neutrality when workers form unions, and require neutrality in any tax incentives.

Strengthen unemployment compensation. The Lordstown closure underscores the need for robust unemployment compensation. Lordstown layoffs have already left thousands of workers without jobs, and more than 1,600 were laid off when the plant closed its doors on Friday. These workers are highly skilled – but in jobs that are leaving the region. Many Lordstown production workers earn $75,000 or more, compared with $36,000 for the Youngstown Metro Area. Many of these workers may never earn as much again. To get any foothold the weaker labor market the plant’s closure leaves behind, many will need to retrain. The state legislature must end its attempts to cut unemployment compensation, expand access, and better promote programs like SharedWork that provide flexibility to employers during downturns.

Get smart about tax incentives. GM has already enjoyed tens of millions of dollars from Ohio taxpayer subsidies. The 2006 deal when Ohio earmarked $82 million to retool the Lordstown plant came with an agreement by GM to continue operations there for at least 30 years. GM reneged on that commitment last week. Tax incentives pit communities against each other and add no value to the U.S. economy. Ohio and its municipalities should seriously reconsider tax incentive as a policy, and should enter nonpoaching agreements with other communities. Any incentives offered to retain or replace production work at Lordstown should mandate a reasonable payback period, require that the UAW contract be retained, be made known well in advance of approval to allow for public comment and should include strong clawback provisions for companies going back on commitments.

These measures may not alter the fate of the Lordstown plant. Yet they can make the transition a little smoother for workers displaced from Lordstown and its suppliers, and may prevent other plant closures in the future. Responsible public policy must support the displaced workers, and take steps to reduce the incidence of events like this happening again.

[2] Center for Automotive Research, “Contribution of the Automotive Industry to the Economies of All Fifty States and the United States,” January 2015, https://bit.ly/2O0lUlo