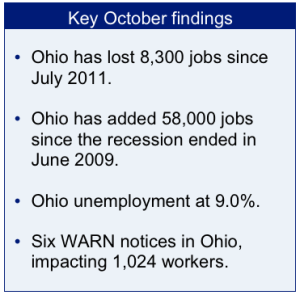 - Data released today by the Ohio Department of Job and Family Services (ODJFS) from its survey of employers for October 2011 suggest that the state, like the nation, is seeing a slowing recovery. Since July, the state has lost 8,300 jobs after gains earlier in the year. The unemployment rate in October inched down 0.1 point to 9.0 percent from a month earlier.

Table 1 and Figure 1 highlight changes in the Ohio job market from key points in time. These include the most recent monthly figures, the start of the 2001 and 2007 recessions, and 2005 approval of a major state tax overhaul, which promised speedier economic growth.

These figures include the latest seasonally adjusted data from the monthly survey of employers (Current Employer Survey) done by ODJFS in co-operation with the U.S. Bureau of Labor Statistics. The survey showed that the number of jobs in the state fell by 600 in October from the month before. As month-to-month data is subject to revision, it is ill advised to rely on month-to-month comparisons. Today’s release revised earlier preliminary data released for September, for instance, reducing the job loss originally reported for that month. 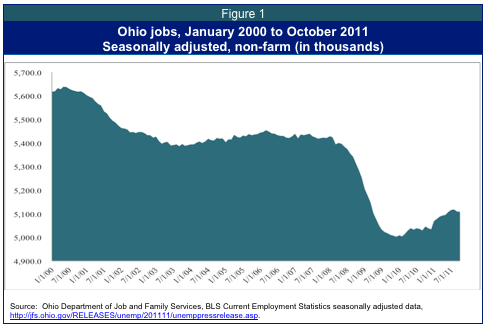 Manufacturing has regained some of its September losses, but is still down more than 126,000 jobs since June 2009. The sector did receive some much-needed good news this week. Chrysler announced plans to invest $500 million in the Toledo facility that makes the Jeep Liberty and Dodge Nitro. The investment is projected to create 1,100 jobs. Republic Steel announced an $85 million investment at its Lorain facility, with 450 new jobs projected. This investment is sorely needed, as manufacturing has been the state’s hardest-hit sector in the period since the 2001 recession.

Most sectors have fewer jobs than they did in March 2001, the official start of the 2001 recession; the major exception is private education and health services, a category that grew by more than 26 percent. An analysis of more recent trends, however, shows that the public sector is the only major sector that has not made some improvement since October 2010.

Ohio's jobs deficit, or the difference between the number of jobs Ohio has and the number it needs to regain its pre-recession employment rate, is 373,100. That number includes the 312,500 jobs Ohio lost plus the 60,600 jobs it needs to keep up with the estimated 1.1 percent growth in population that Ohio has experienced in the 46 months since the recession began. In order to return to pre-Great Recession levels of unemployment in three years, the state must add 10,000 jobs per month. Figure 2 shows the number of jobs lost since December 2007 and the number needed to keep pace with population growth. 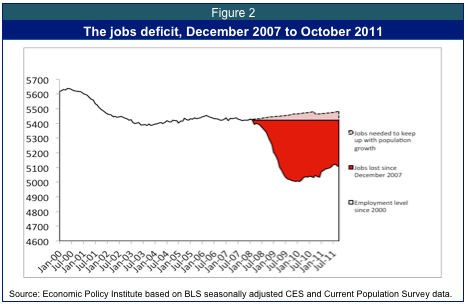 Unfortunately, some of the job gains just announced for Toledo and Lorain are offset by expected losses reported in October’s mass layoff notices. The Worker Adjustment Retraining Notification (WARN) Act protects workers and communities by requiring employers with more than 100 employees to provide 60 days advance notice of plant closures or mass layoffs. Federal, state, and local government entities are not covered. WARN triggers rapid response services, which can include layoff aversion, training and dislocated worker assistance.

Ohio has not recovered from the recession of 2001, and the recession of 2007-09 only deepened Ohio’s ills. The austerity measures being taken at the federal and state levels and the related attacks on the public sector are slowing our recovery and adding to the unemployment rolls. Now is the time for investment, not cuts.

Ohio needs to help our manufactures remain competitive. The good news announced this week by Republic Steel and Chrysler is evidence that we can rebuild the state’s manufacturing sector. One way to support our manufacturers is through smart workforce training policy. Funding for the Ohio Skills Bank could foster industry partnerships in this sector. Industry partnerships are employer, worker, state, and stakeholder consortiums that work together to identify common human resource challenges and opportunities. A statewide industry partnership program in Pennsylvania brought together 80 partnerships, representing more than 6,300 firms. More than 70,000 workers in Pennsylvania have been trained since the program started in 2005. Workers saw a 6.6 percent average increase in wages in their first year out of training. Ohio should set aside some of its anticipated casino revenue to expand the work of the Skills Bank and support industry partnerships.

A statewide worksharing policy also would benefit both employers and workers. This would allow the partial payment of unemployment benefits to workers who have had their workweeks shortened as an alternative to being laid off. Employers could retain skilled employees, avoid expensive retraining and rehiring and be ready to produce more when demand improves. Employees could maintain much of their regular income, stay employed, and avoid the disruption of sporadic unemployment.

Implementing these two policies could change the landscape for Ohio manufacturing, but both require a commitment on the part of policymakers, employers and other stakeholders to innovation and investment, rather than austerity.

JobWatch is an ongoing project of the Economic Policy Institute (http://www.epinet.org)