The numbers: Seasonally adjusted data released today by the Ohio Department of Job and Family Services (ODJFS) show Ohio employers added 19,200 jobs over the month, from an upwardly revised 5,321,700 in June to 5,340,900 in July. While preliminary numbers are subject to revision, last month’s numbers show a second month of progress after six months without job growth. Ohio still has 269,000 fewer jobs than in February 2020 before COVID-19. Over the last six months, Ohio employers have added jobs at a rate of 0.12% per month. At this rate, it will take Ohio 43 months to restore our February 2020 level of 5,609,900 jobs. The U.S. rate of recovery is four times as fast at 0.48% per month.

More hiring shows Ohioans are starting to get back on their feet, but recovery is still far from complete. Only Transportation, Utilities and Warehousing has recovered — and gained — jobs since February 2020. That sector has gained 12,600 jobs (+5.1%) as Ohioans and others have shifted consumption patterns toward more online purchases in response to the pandemic. As a share of jobs, Finance and Insurance has nearly recovered (-0.7%; 1,700 jobs), as has retail trade (-0.8%), though this remains a large shortfall given the size of the industry: (-4,600 jobs). Accommodation and Food Services continues to have the largest job losses (-57,300).

“Though employers in most sectors made more hires last month, the longer trend shows Ohio policymakers can’t let up on pandemic recovery support and aid,” said Policy Matters Ohio researcher Michael Shields. “Ohio’s job recovery from the Great Recession took seven years and the poverty rate had barely returned to 2007 levels before this crisis began. Following the 2001 recession, Ohio’s median wage did not recover until 2018. Unprecedented federal stimulus has helped this recovery move more quickly, but over the last six months, Ohioans have been getting hired at slower rates compared to the rest of the nation. If we don’t sustain the faster pace of the last two months, we are on track for another slow recovery. Now policymakers must put working people at the forefront of their spending plans for federal recovery dollars, so this time we can drive a recovery that includes everyone.”

According to the separate survey of households, also released today by ODJFS, Ohio’s unemployment rate rose from 5.2% in June to 5.4% in July. The increase was due to 25,000 Ohioans returning to the workforce to seek jobs, but only 15,000 finding them. This is the second month in which we have seen this trend. There are still 295,000 more Ohioans out-of-the-workforce since pre-COVID, and 317,000 fewer working, according to the household survey. This survey measures Ohioans working, whereas the employer survey measures the number of jobs currently filled. This trend follows a very large reported decrease in the Ohio labor force — the number of Ohioans working or actively looking — of 283,000 from April to May. At 57.2%, Ohio’s July labor force participation rate lagged the nation’s by 1.2 percentage points.

A slight rise in the unemployment rate can be a sign of recovery as sidelined workers come back into the workforce to look for jobs. July marks the second month of good news for Ohio’s job market, but Shields cautioned both state and federal policymakers against ending public supports too soon.

“Many Ohioans pushed out of their jobs by COVID-19 are still struggling to get back in,” he said. “With COVID cases on the rise and a weak six-month job growth rate, Ohio is not out of the woods. Cutting people out of federally funded supports too soon will put the state further behind in terms of both recovery and equity. President Biden should extend enhanced jobless benefits set to expire next month, and Gov. DeWine should reverse his decision to exclude Ohioans whose jobs have been destroyed by COVID-19 from the federally funded $300 unemployment supplement.” 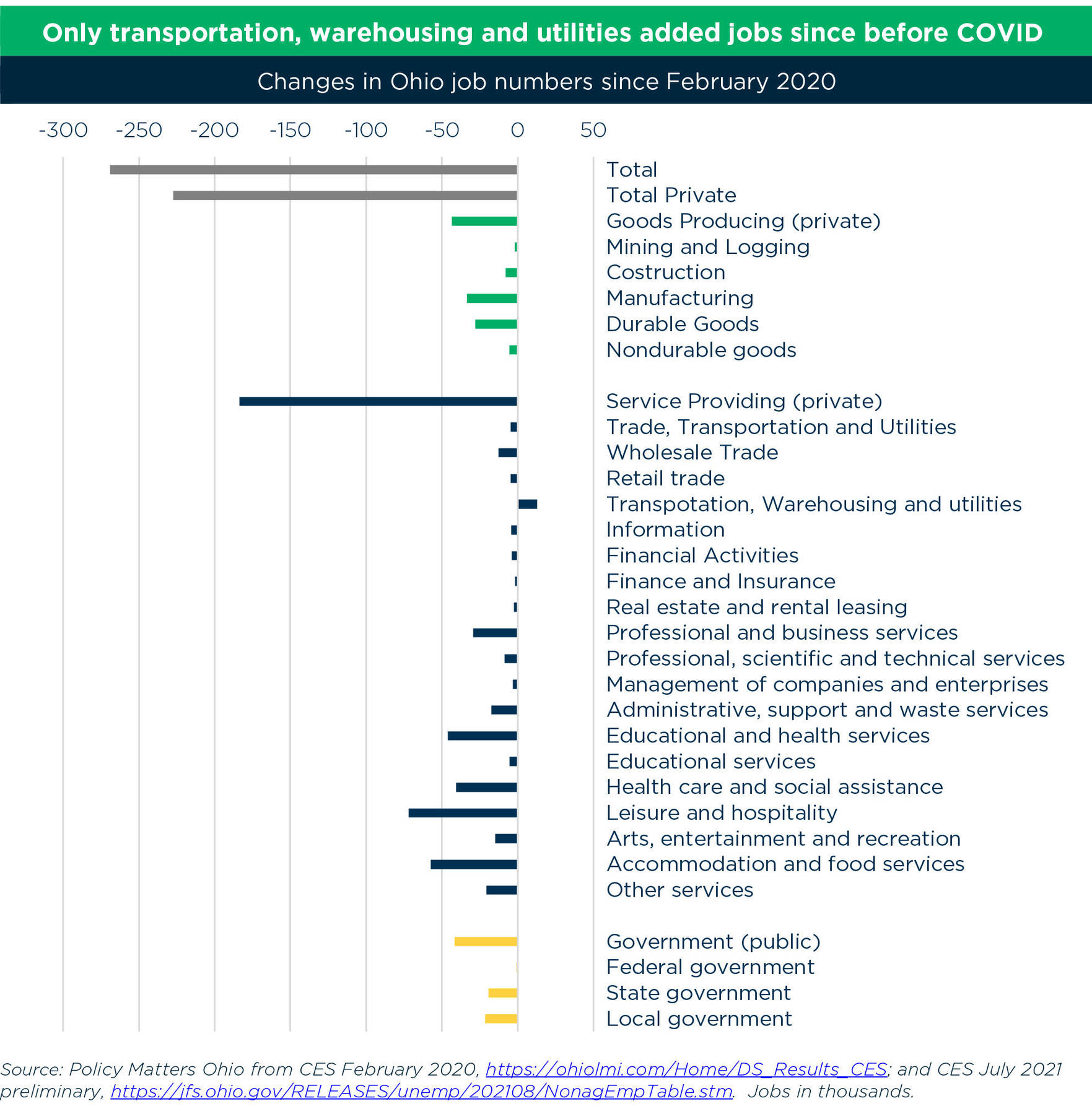