The takeaway: Ohio’s job recovery started earlier than previously estimated and has slowed more than originally reported. In December, job openings fell, and a record number of Ohioans quit their jobs. The data revision released today shows the positive impact of federal stimulus programs and makes a strong case for more such action.

The benchmark: The federal Bureau of Labor Statistics (BLS) and the Ohio Department of Job and Family Services (ODJFS) released their annual benchmark data revisions today which show that nearly two-thirds of the jobs recovered in 2021 (58,700 of 92,000) were restored in the first half of the year. The upward revision to early year estimates and the recent slowdown offset one another to leave the December jobs total just 2,400 shy of the original estimate

The new seasonally adjusted numbers show that in January 2022, Ohio had 192,200 fewer jobs than we did in February 2020 just before COVID public health protections took effect. Ohio had 5,421,600 jobs, a number that sets the state back to June 2015. It took Ohio more than eight years to recover the jobs lost in the Great Recession: Ohio exceeded its June 2007 level of 5,439,600 jobs for the first time in October 2015. Ohio has never recovered all the jobs lost in the early 2000s recession.

Statement from Policy Matters Ohio researcher, Michael Shields: “The data released today point to the impact of measures taken by federal policymakers to stabilize and support families in Ohio and across the U.S. Federal action drove the rapid early recovery from the COVID Recession. Ohio was on track to recover faster than ever from this downturn. The lackluster recovery rate the state has experienced in recent months shows that we are not out of the woods and that policymakers at all levels of government should take action to stimulate the economy by making sure people have enough money to pay the bills, put food on the table and cover the cost of housing. Ohioans deserve a full recovery: one that includes everyone.”

The household survey: According to the separate household survey, 3,000 Ohioans entered the workforce in January, bringing the number of Ohioans now working or actively searching to 5,744,000, about 155,000 fewer than in February 2020 before the COVID-19 disruption. Ohio’s workforce participation rate (61.5%) was slightly lower than the nation’s (62.2%). The December estimate underwent a large upward revision, adding 43,000 Ohioans to the workforce. Ohio’s unemployment rate for January fell 0.2 points to 4.3%. The unemployment rate for the U.S. rose 0.1 points to 4.0%.

Hires and quits: The latest data for states from the Job Openings and Labor Turnover Survey show that the number of job openings in Ohio fell from 426,000 in November to 404,000 in December as fewer employers sought to hire. That month, a record 166,000 Ohioans quit their jobs and 45,000 were laid off, bringing the total of 221,000 Ohioans who separated from work slightly above the number hired: 219,000. December data are preliminary.

Quote from Shields: “Nearly the same number of Ohioans found jobs in December as left or lost them, while employers slowed efforts to hire. Policymakers must take action to recover the jobs still lost to COVID-19 and ensure that every Ohio job pays enough to afford families stability and security.” 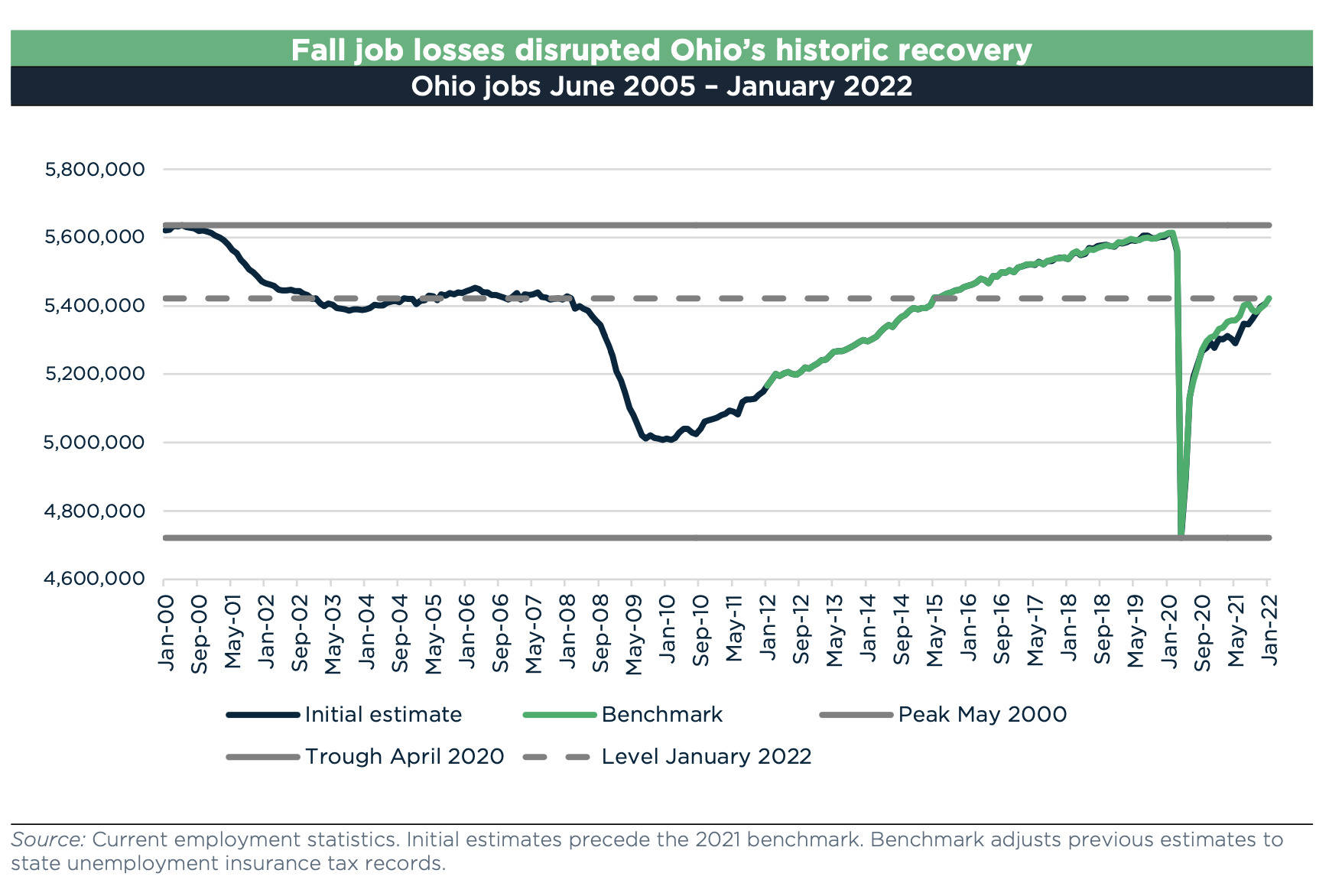 BLS and ODJFS benchmark total nonfarm payroll unemployment to state unemployment insurance tax records each March. This can result in substantial revisions to previously reported jobs data. In this benchmark, data running as far back as January 2017 were revised.

JobWatch: After adding jobs in November, Ohio on track to recover destroyed jobs by 2023
December 17, 2021

JobWatch: After adding jobs in November, Ohio on track to recover destroyed jobs by 2023
December 17, 2021