Year-over-year service sector job losses exceeded losses in goods-producing industries and public sector jobs, but nearly every major sectors closed 2020 worse off than there where they were in 2019. Leisure and hospitality was hit hardest, displacing many low-wage workers.

What it means: Policy Matters Ohio Researcher Michael Shields, issued this statement about the revised 2020 data:

“We all knew last year was a difficult one for Ohioans. Hundreds of thousands were laid off from their jobs due to a pandemic that has killed thousands of our friends, family members and neighbors. Today’s benchmark numbers confirm that Ohio continues to have a long road to recovery. January’s job numbers were about on par with March 2014, setting us back nearly seven years to the slow recovery from the Great Recession. On the bright side, more Ohioans landed jobs in January, and revised numbers from December show gains for that month as well. Historic fiscal stimulus is working, but we’ve got a long way to go.”

January update: Preliminary estimates for January showed employers added 28,900 jobs that month for a total of 5,306,700 jobs in the state. December’s revised figure exceeds a preliminary estimate of 5,241,700 jobs, which initially indicated the state had lost jobs that month; the revised numbers mark a gain of 24,600 jobs in the month of December.

The separate household shows the unemployment rate continues to mask the severity of the pandemic recession as the rate fell to 5.3%, from a revised 5.6% in December. Since last January, 165,000 Ohioans left the labor force. The unemployment rate for the nation was 6.3% for January.

January’s figures are preliminary and subject to revision. 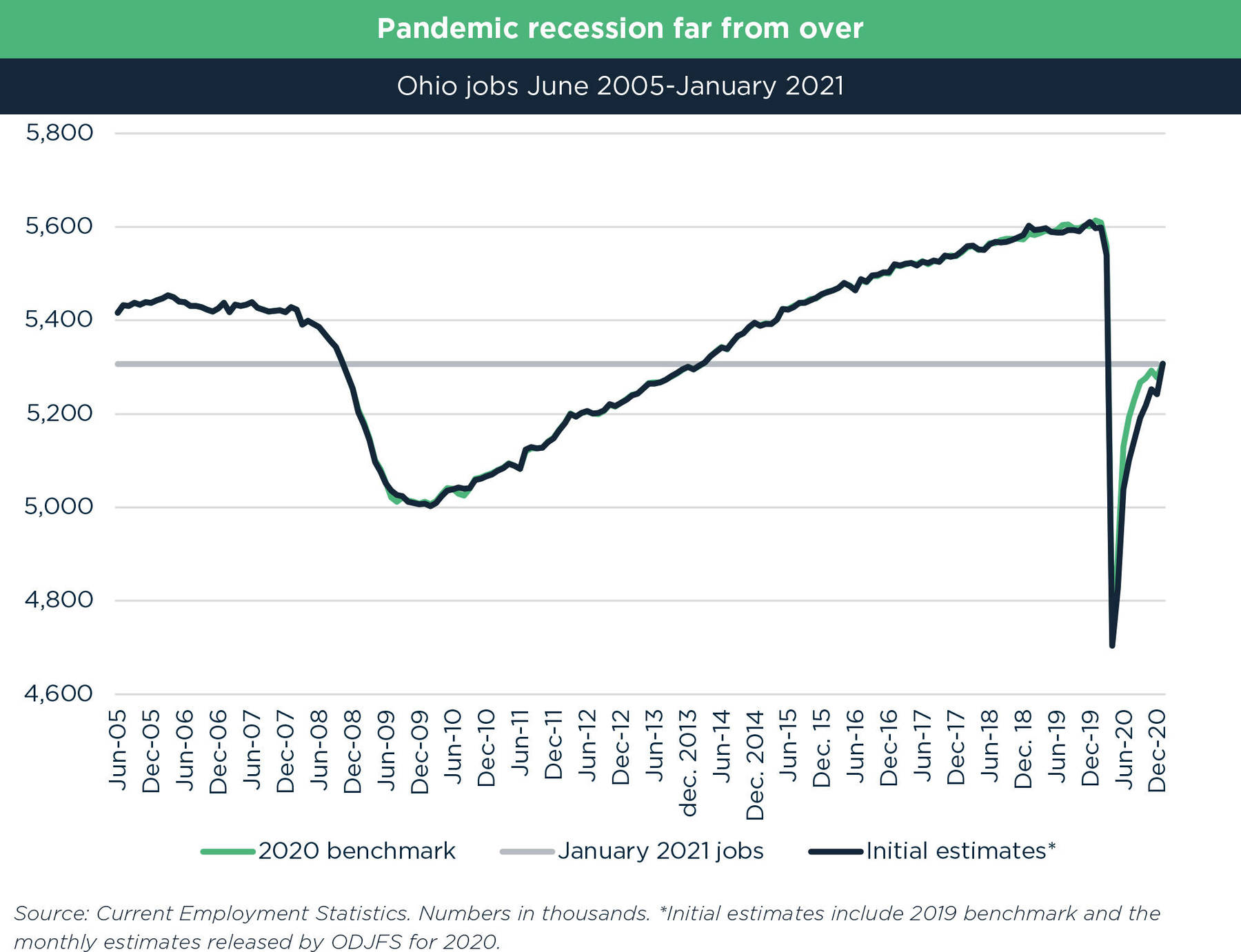 Shields offered the following solutions to support working Ohioans and rebuild the economy:

Continue federal stimulus as long as it’s needed: “Previous federal aid packages of historic scale helped to quickly get many people who had been laid off back to work and keep many people in their homes, but we still have a long way to full recovery. The $1.9 trillion stimulus package signed by President Biden this week is a critical step that meets the scale of the challenge to help get Ohioans who had been laid off back to work and to help people who had lost income get back on their feet. The bill takes effect just as benefits were set to expire. Federal leaders should extend unemployment compensation as long as support is needed, and at least through October 3, so it will not be allowed to expire while Congress is on recess. The American Rescue Plan has given us vital tools to drive the recovery. Now we all must make sure that recovery includes everyone”

“As of January, more than 300,000 Ohioans had been laid off, but many of the people who need UC have faced delays and confusion to get it. ODJFS has fallen behind in distributing reinstated federal Pandemic Unemployment Assistance payments that cover residents typically excluded from the system. State policymakers should modernize Ohio’s dated UC system, seek feedback from claimant advocates, and review access for Ohioans with low incomes and residents of color who were especially harmed by the recession. Ohio lawmakers must make sure all Ohioans who need it can get food, health care and UC support, instead of trying to erect barriers to these vital programs.”