The numbers: As Vice President Kamala Harris visits Ohio today to celebrate the passage of the infrastructure bill, new jobs numbers indicate the bill will help build on positive momentum in the labor market. Seasonally adjusted data released today by the Ohio Department of Job and Family Services (ODJFS) show that Ohio employers added 20,100 jobs over the month, from an upwardly revised 5,361,200 in September to 5,381,300 in October. October job gains improved significantly over the prior month as employers added twice as many jobs as in September. These figures are from a survey of employers and preliminary numbers are subject to revision. Ohio employers have added 103,500 jobs so far this year. Ohio is recovering jobs about half as quickly as the nation, with a monthly growth rate averaged over the last six months of 0.24%, compared with 0.46% for the U.S. Ohio remains 228,600 jobs below our pre-COVID number in February 2020.

Just two sectors have fully recovered jobs lost since the start of the COVID-19 recession. Employers in transportation, warehousing and utilities have added 19,700 jobs since February 2020, largely reflecting a change in buying habits induced by the pandemic, and retail employers have added 2,600 jobs. “The recovery of these sectors suggests that the unprecedented stimulus directed to Ohioans during the COVID recession buoyed their spending as intended and may have successfully averted what could have been a far more severe and longer downturn,” said Policy Matters Researcher Michael Shields.

Leisure and hospitality jobs remain the largest shortfall (-61,500). The industry still struggles with lingering risks from the pandemic and the failure of segments of the public to get vaccinated. “Underpaid Ohioans, like many working in the leisure and hospitality industry, have the fewest resources and public supports to withstand job layoffs,” Shields said. “They also tend to be frontline workers, more exposed to the unvaccinated public and at higher risk. Pres. Biden’s vaccine mandate could help to drive recovery if it takes effect, but court challenges have made that uncertain.” 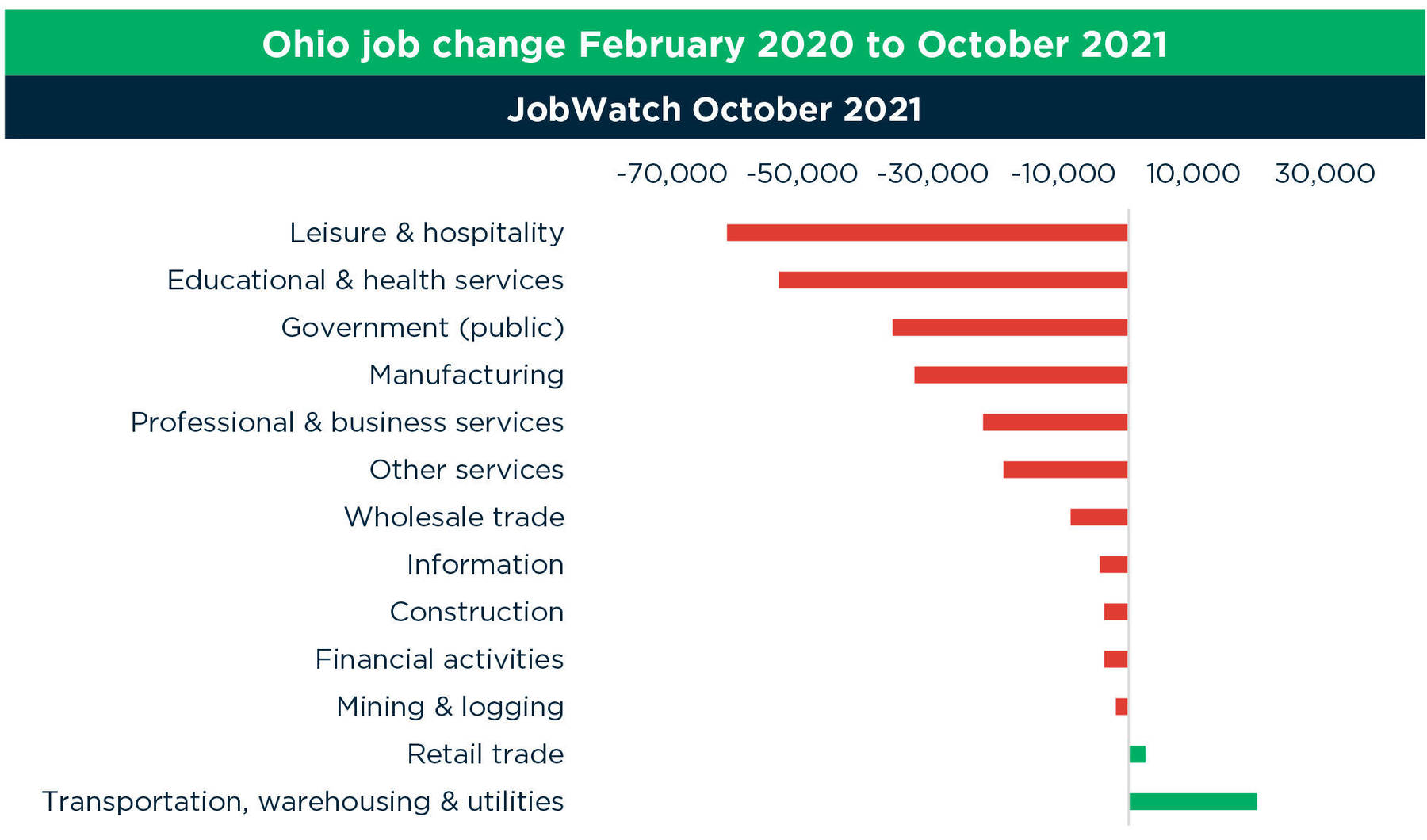 “Ohio’s recovery doesn’t just depend on restoring lost jobs, but also on improving the quality of our jobs so that every working Ohioan is paid enough to cover the basics. Federal lawmakers took a big step to create high quality jobs for Ohio and the nation when they passed the infrastructure bill Monday — which will bring thousands of jobs to Ohio building roads, railways, and modernizing our power grid. If enacted, the Build Back Better Act passed by the House today will add even more jobs, and make needed investments in child care, higher education and sustainability. The Senate should pass it and Pres. Biden should sign it into law.”

Building a brighter future for all Ohioans requires our policymakers to learn from the COVID crisis, Shields said. “We know the economic relief that made its way to families in the form of unemployment supplements, pandemic assistance, stimulus payments and child care tax credit payments worked to avoid an even more devastating and prolonged downturn,” he said. “Policymakers must include shoring up our unemployment compensation system, our primary automatic stabilizer, as a top legislative priority.”

A Policy Matters Ohio report found last month that some 591,000 Ohioans would be excluded from state unemployment benefits if they lost their jobs, under the state system. Without federal intervention and protection during the pandemic Ohio’s unemployment compensation system would have been too weak to protect workers.

“Instead of playing political games and rigging redistricting, Ohio policymakers should be taking steps to ensure that all working Ohioans are safeguarded against job loss now and in the future.”