Unemployment rate lower because Ohioans have stopped looking for jobs 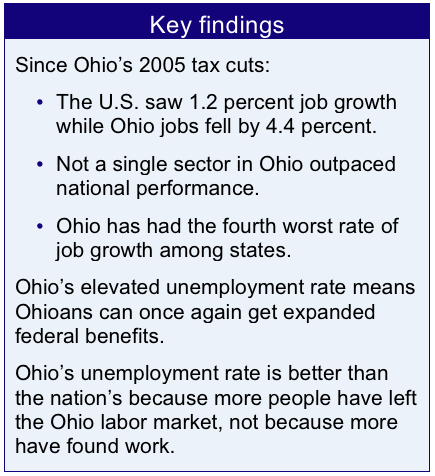 Since Ohio policymakers passed large income-tax cuts in 2005, Ohio has lost ground compared to the nation in total job growth, according to a new analysis by Policy Matters Ohio.

“Proponents promised that the cuts would boost the state’s struggling economy and create jobs, but that promise has not panned out,” said Hannah Halbert, Policy Matters workforce researcher. “Not a single sector in Ohio has outpaced national performance.”

“State economies are complicated, and there are many reasons Ohio job growth is lagging,” said Halbert. “But it’s clear that the 2005 tax cuts did not bring about the promised job growth