The Ohio Department of Job and Family Services (ODJFS) today reported that jobless claims for Ohio soared to 187,789 for the week ending March 21 from 7,042 a week earlier. This is an historic high.

Last week’s jobless claims top the monthly filings of all but Ohio’s worst month on record, December 1981, when claims reached 205,159. The next highest month, December 1982, saw 167,638 claims: roughly 20,000 fewer than reported last week. Those monthly peaks happened during a recession that hit Ohio harder than the one in 2008. Ohio manufacturing jobs never recovered.

“Policy makers should take note that this is no time to slow the economy through spending cuts,” said Policy Matters Ohio researcher Michael Shields. “Ohio must turn to the federal government for fiscal stimulus dollars, both as direct supports for residents, and to prevent the state and local governments from having to make austerity cuts that would make matters worse.”

These numbers come just before large portions of Ohio’s economy were abruptly halted by Governor DeWine’s March 22 “stay home order,” intended to slow the spread of the COVID-19 coronavirus. The order mandated the closure of non-essential business activities and urged Ohioans to stay home. The filings show that Ohio employers were already shedding jobs in the midst of school and restaurant closures, and in response to the COVID-19 pandemic.

Shields said that Gov. DeWine’s order was needed to save lives and that Ohio could not have stopped a coronavirus recession by hesitating to act.

We won’t know the specifics of which jobs were affected until next month, when the employer and household surveys we regularly feature in JobWatch come out for March. But Moody’s Analytics has classified jobs in five industries as most at-risk: Leisure and hospitality, transportation, mining, employment services, and travel arrangements. Together these jobs comprise 921,000 jobs: a fifth of all private sector Ohio jobs, and $234 billion in earnings. Moody’s released these projections ahead of school and restaurant closures, and stay-at-home orders in Ohio and other states, which will extend to other jobs.

“Ohio policymakers must act to preserve as many jobs as possible, and to support the spending of those who must be out of work, to prevent an even deeper recession,” said Shields. 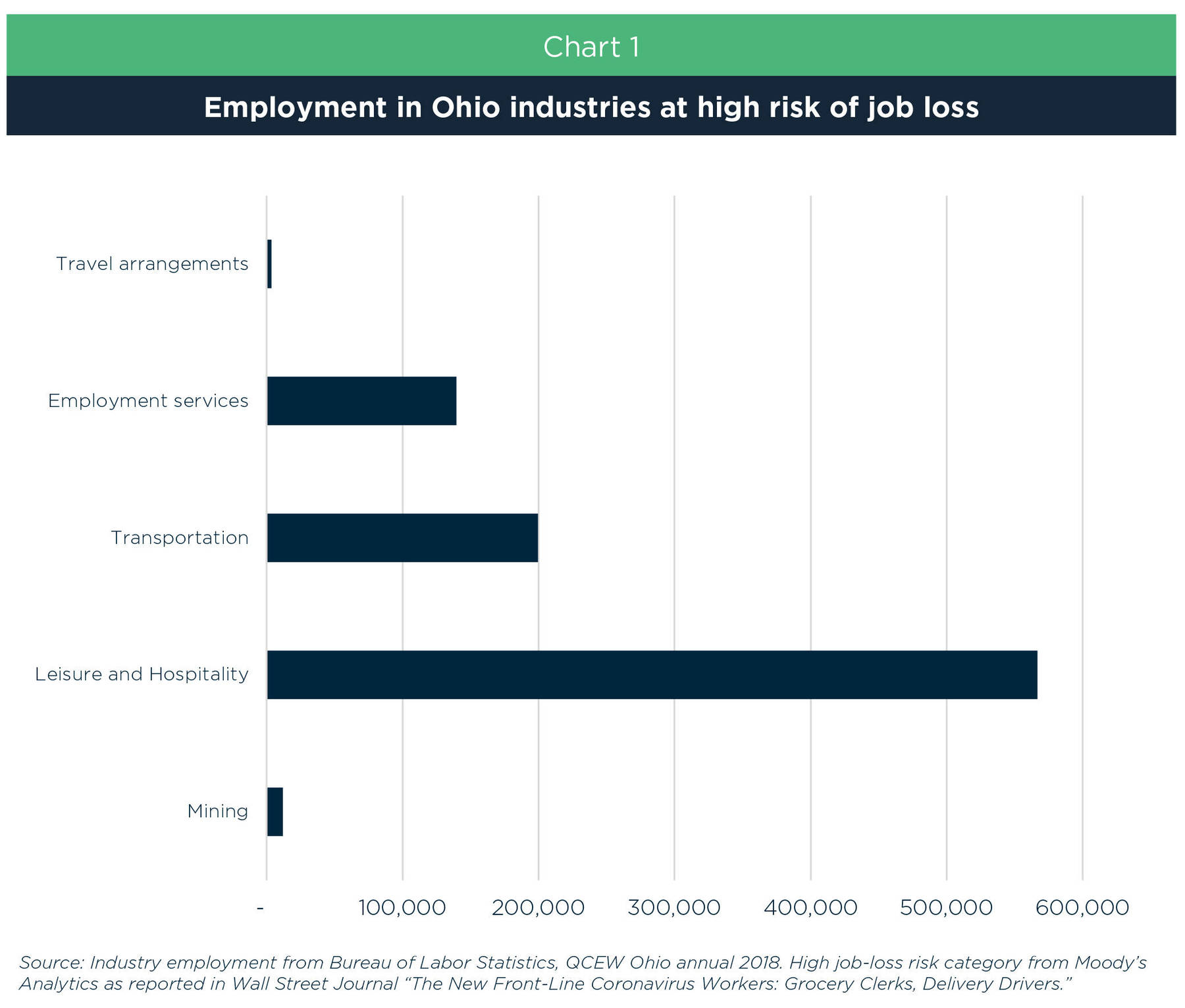 Shields said that Ohio policymakers have primed Ohio for a deeper recession by leaving too many Ohioans on the fringe, with low earnings and few public supports.

“Policies that have left many Ohioans struggling at the margin will make the unfolding recession worse. Thankfully, Congress has approved additional aid for the states, but it probably won’t be enough, given the scale of the cutbacks. Ohio must do all we can to sustain government spending and avoid cuts that would make the recession worse,” he said.

Congress has stepped up and provided major additions to the unemployment (UC) system, including extending benefits to many workers not previously covered and creating a temporary $600-a-week payment for UC recipients. The new federal law also includes grants to states to improve and promote their work sharing programs, which allow employers to avoid layoffs by cutting hours while workers receive proportionate UC for days they don’t work. Work sharing will be of vital importance for those who can work off-site and for others once it becomes safe to return to the jobsite. Ohio should take full advantage of that opportunity so a maximum of employers are able to participate. Ohio’s unemployment compensation system currently covers only one in five jobless residents. That’s partly because state rules require workers to average at least $269 per week to qualify. A worker making $10 per hour for 25 hours a week – like many of the workers Gov. DeWine sent home from restaurants, childcare centers, and other businesses – don’t qualify. It appears the new federal law will allow many of these workers to temporarily receive benefits. Ohio needs to overhaul its system so that becomes permanent. ODJFS also needs to interpret new state legislation approved by the General Assembly yesterday broadly to make sure that workers who must stay home because of the virus – including those who fear for their health and are susceptible, such as older grocery store workers – receive benefits, as federal guidance allows. The UC system must be a true backstop for those affected by the economic slowdown.

Public sector workers provide vital infrastructure and services, and their spending helps sustain the consumer economy. It’s public sector jobs that the state is most able to preserve in a downturn. Doing so and meeting other critical needs in the context of diminished tax revenues will require massive federal stimulus dollars directed to state and local government. The $150 billion earmarked in the CARES Act is a start. Yet Gov. DeWine has already asked state agencies to outline budgetary cuts of up to 20%. Such austerity cuts would exacerbate the severe recession already underway. Because the state is required to balance its budget, Ohio has budgetary constraints on its ability to inject stimulus into the economy, but stimulus will be critically important. Ohio should employ its rainy day fund to avoid cuts and should join other states in demanding adequate stimulus dollars from the federal government to sustain the economy against a collapse, for as long as it’s needed.

The federal Families First Coronavirus Response Act requires many U.S. employers to pay up to 80 hours of paid sick time for employees who are out of work, and extended paid leave for 10 weeks after that in the case of workers who must take leave to care for a child out of school. Unfortunately, it leaves major gaps in coverage, which Ohio should fill. Ohio should mandate that large employers with over 500 staff, exempt from the federal mandate, provide emergency paid sick time to workers. Healthcare workers and first responders can be excluded from coverage under federal law at the discretion of their employers. Now more than ever, these workers put their lives on the line to keep the rest of us safe and healthy. Ohio should mandate that all are covered. And the federal mandate allows small businesses with less than 50 workers to request an exemption. Employers are fully reimbursed for mandatory paid sick time they pay by the federal government with a tax rebate, so employers covered under that legislation only front the costs. Small businesses might seek an exemption because they lack the reserves to make those payments up-front. Ohio should require all employers comply, and should offer loans to firms seeking a small business hardship, to be paid back using the federal rebate.