Ohio sheds more jobs in May

Ohio sheds more jobs in May

The numbers: Seasonally adjusted data released today by the Ohio Department of Job and Family Services (ODJFS) show Ohio employers cut 14,800 jobs in May, taking Ohio to 5,289,200 jobs and making May the third month of job reductions since the economy began to recover. A downward revision showed that Ohio also fared slightly worse in April than initially thought, losing 8,000 jobs instead of the first estimated 3,700. As of May, Ohio has 321,000 fewer jobs than in February 2020, before COVID-19.

The rapid growth of the early recovery that prompted a hiring surge brought back more than half a million jobs from a low of 4,721,400 in April 2020. Now progress seems to have stalled far short of a total recovery. May’s job numbers take Ohio below where we were in November 2020, when Ohio had 5,292,300 jobs. That means no progress toward recovery in six months. 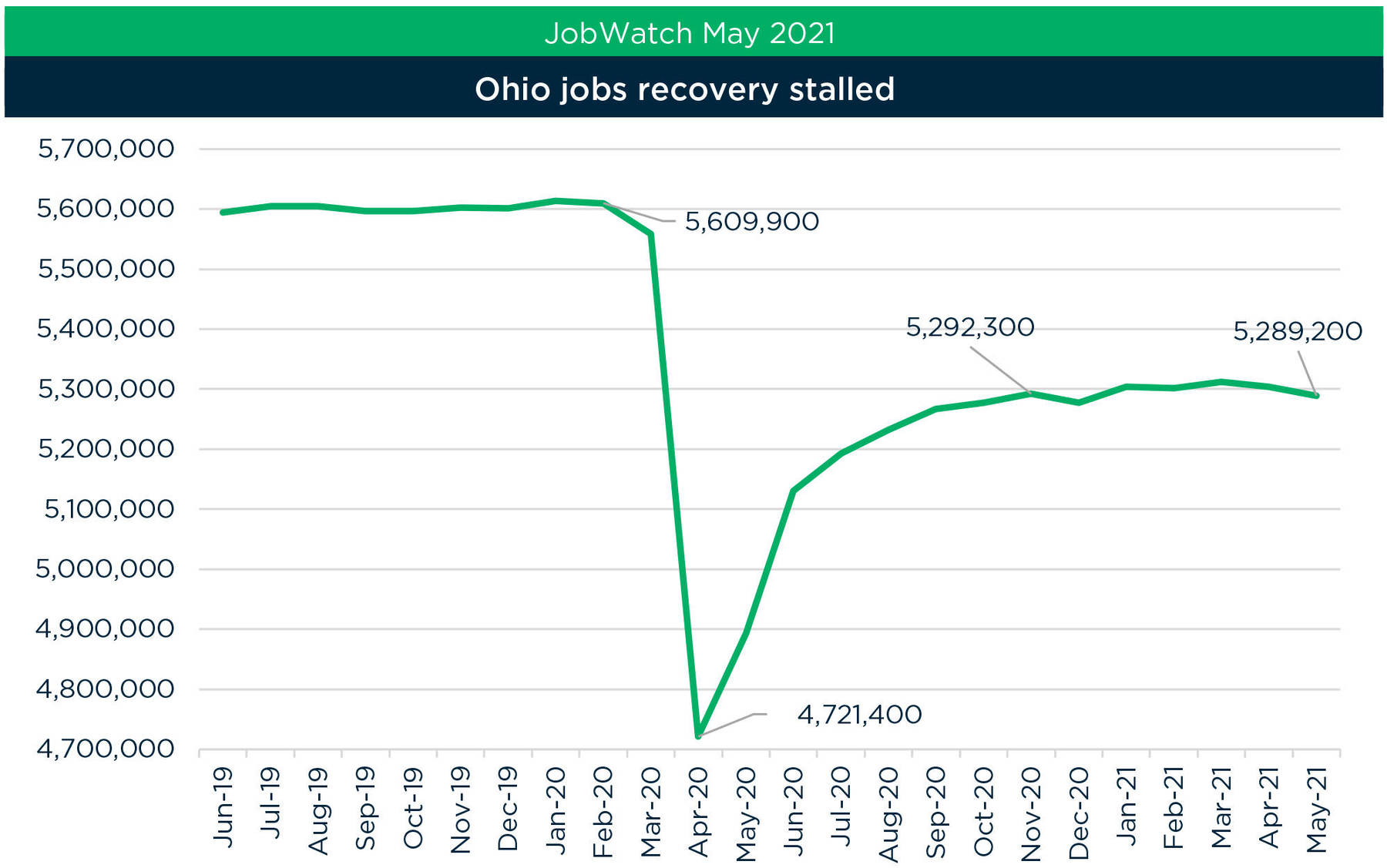 Supply chain disruptions may be partly to blame for job losses in three of five months this year. These are supplies and components used to make goods or provide services whose production got held up by COVID-19. Employers in trade, transportation and utilities reduced jobs by 7,800 last month; nondurable goods manufacturers cut a further 4,400 jobs.

“With 321,000 fewer Ohio jobs than in February 2020, Ohioans cannot afford a stalled recovery,” said Policy Matters Ohio researcher Michael Shields. “Even though more Ohioans were laid off in three out of 2021’s five months, Gov. DeWine announced plans to prematurely end $300-per-week enhanced unemployment benefits effective next week. This cruel decision will cost Ohio $1 billion in foregone payments to Ohio families whose jobs have been destroyed by the recession, and lost business revenue their spending would have generated. Gov. DeWine should reverse it immediately.”

According to the separate survey of households, Ohio’s unemployment rate rose from 4.7% in April to 5.0% in May.

The household survey marked a dramatic swing from the prior month’s estimates, with an estimate of 223,000 jobs lost in May, from 5,494,000 jobs in April down to 5,271,000 jobs in May. Monthly numbers are preliminary and subject to change. This change likely indicates a survey irregularity. While it is not clear whether May’s estimates or prior ones were more accurate, May’s numbers agree more closely with the employer survey.

Shields said, “While preliminary numbers are subject to change, the trend of the last few months is clear: Ohio’s recovery has slowed to a crawl, leaving out hundreds of thousands of Ohioans. What’s more, we know the suffering from this recession is not evenly distributed. In May, Black Ohioans filed initial jobless claims at nearly double the rate of their white counterparts. Ohio policymakers need to use every available tool to restart this recovery and sustain it long enough to include everyone. That means restoring federal unemployment benefits immediately, directing fiscal recovery funds from the American Rescue Plan Act to drive equitable growth, and using the state budget to care for all Ohioans, no exceptions.”