Increasing the municipal minimum wage would reduce inequality, keep workers out of poverty, and boost consumer spending in Columbus.

Efforts are under way to raise the minimum wage at the city level for Columbus to $12 an hour, phased in over the next four years to reach $12 by 2021. Policy Matters Ohio examined the impact this could have on Columbus workers, and found that benefits would be substantial and widely shared.

Today, Columbus workers are covered by Ohio’s minimum wage, which is $8.10 an hour. The state minimum wage is indexed to inflation so workers don’t lose purchasing power over time. While this index is a vital tool in keeping the lowest wages from losing value, the base wage itself is low and out of sync with the cost of supporting a family. And with inflation rates close to zero last year, this year’s minimum wage stays the same. While most adults in Columbus are working, not all workers are making the wages they need to get by. Columbus residents face higher rates of poverty than the state: 22.3 percent of all Columbus families and 31 percent of Columbus children were in poverty in 2014.[1] That compares to 15.8 percent and 22.7 percent for Ohio. 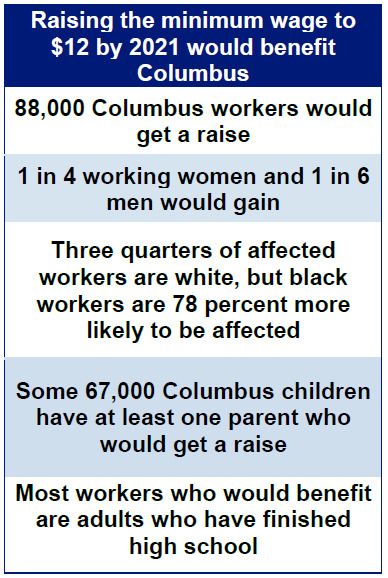 A higher minimum wage can help

Previous reports have consistently found that minimum wage increases that boost spending power for the lowest wage workers deliver growth and job creation in their communities. We can expect similar effects from a minimum wage raise in Columbus.

Families have a stake

Opponents of raising the minimum wage often argue that most minimum wage workers are teens. Bout our analysis found that among Columbus workers who would get a raise, 85.7 percent are adults 20 and older. More than eight in 10, have already completed high school.

Many are parents providing some or all of the monetary support for their families. Nearly one in three Columbus children have a parent who would get a raise as a result of the proposed minimum wage boost. That’s a total of some 67,000 children.

Women workers in Columbus are more likely to face low wages than are working men. About 23.8 percent of women workers earn wages below the proposed level ($12 in 2021, worth $10.68 in 2016 dollars), compared to 17.5 percent of men. This means that raising the wage to $12 an hour by 2021 would benefit one in four working women in Columbus, and one in five working men.

One-third of all black workers (32.1 percent) fall into the low-wage group who would see a raise if the $12 by 2021 measure were enacted. African Americans are disproportionately faced with low wages: they are 78 percent more likely to be earning wages below $10.68 today. Black workers who would get a raise currently earn $8.73 per hour on average, and would see an average raise of $1.95 in today’s dollars.

Among white workers, 18.0 percent would get a raise. The average wage among these workers is $8.57, and the typical raise would be $2.12 in today’s dollars. White workers comprise three of every four low wage workers who would benefit from a $12 minimum wage. 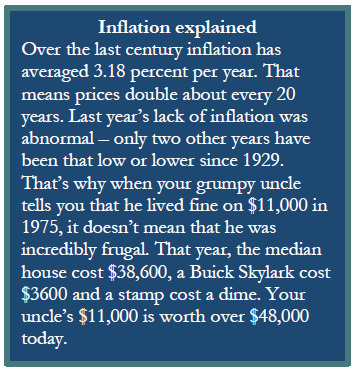 Ohio’s $8.10 minimum wage is out of sync with the cost of living for families in Columbus and the state. Columbus should implement its own higher minimum wage, with an inflation index to ensure low-wage workers don’t lose buying power over time. Raising the wage in Columbus to $12 per hour by 2021 would benefit more than 88,000 Columbus workers and their families.