Gender and the Ohio workplace

Women are an essential part of the Ohio and national workforce. However, men consistently earn more than women. We call this wage disparity the gender pay gap. Improving jobs and compensation for women will boost our economy and provide more opportunity and security to women and their families. Husbands, sons and fathers depend on the salaries of women in their lives. Equal pay concerns all of us.

Analysts cite several reasons for the gender wage gap. These include discrimination, differential compensation for jobs that have historically attracted men and women, occupational choice, level of labor force participation, and hours of work. This report provides an overview of the job market women face and considers these variables and the effect they have on the gap. 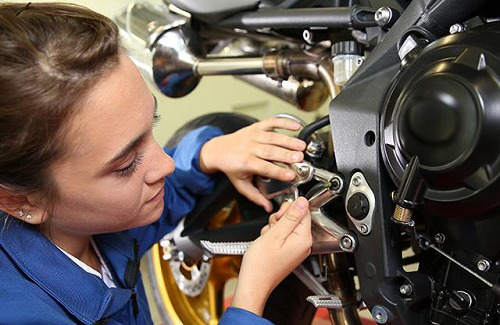 Women in the workforce: An overview

Women are a little less than half (48 percent) of Ohio’s workers.[1] Men are more likely both to be in the labor force (68 percent) than women (57 percent) and to be employed (65 vs. 57 percent). Women comprise a far higher share of part-time workers than men do. It’s hard for families with children to send all adults into the workforce full time, so the lower-paid parent often works part time to manage more of the parenting. 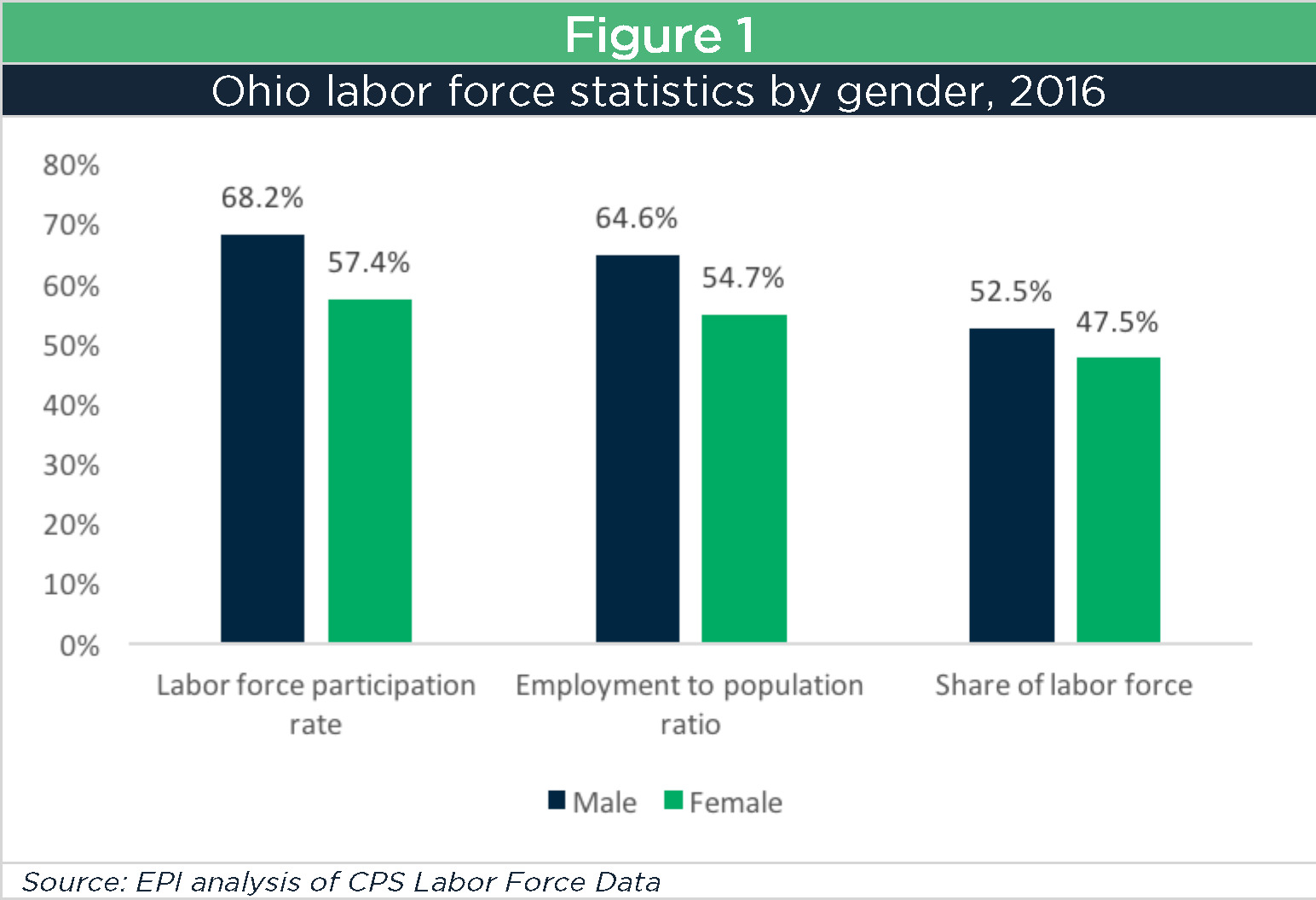 Men earn more than women in Ohio, but over time, the gap shrank. Between 1979 and 2016, Ohio women at the median went from earning 61 percent of men’s hourly wages to 82 percent. However, the recession in 2000 stalled this progress. While women’s hourly wages increased by nearly 10 cents a year from 1979 to 2000, from 2001-2016 women’s wages plateaued - increasing by just 1.6 cents at the median annually, adjusted for inflation.

Unfortunately, rising wages for women account for just 47 percent of the reduction in the pay gap. The rest is due to falling men’s wages. Since 1979, women’s inflation-adjusted wages have grown 19 percent, to $15.52 at the median, but men’s have fallen by 13 percent, to $18.88 today. A thriving labor market would feature rising wages for both men and women, and a shrinking gap. 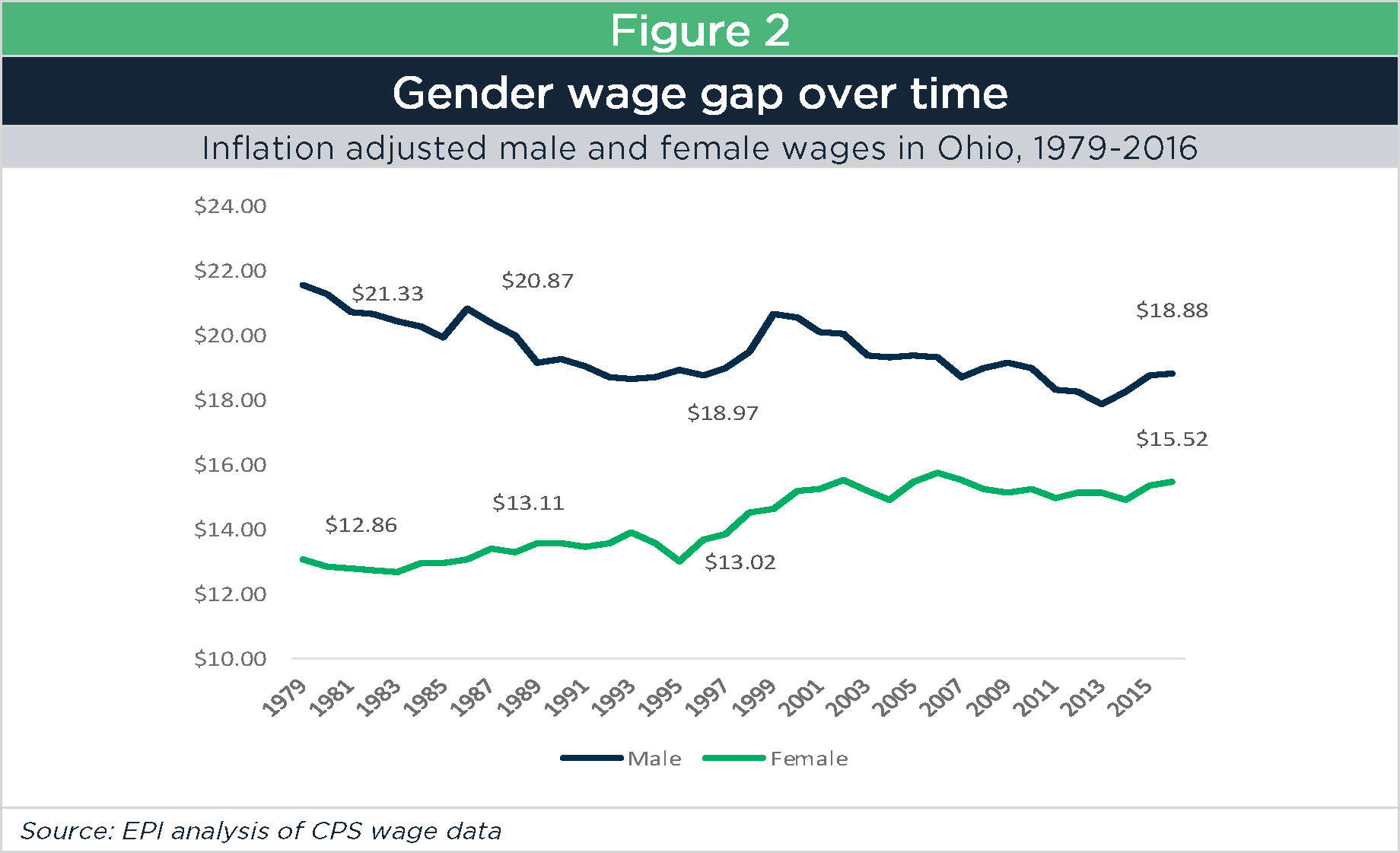 What is the wage gap?

Women make 82 cents for every dollar men make at the median, a gap of $3.36 per hour. This roughly translates to a salary difference of $7,000 for full time, year-round median wage workers. With the scales tipped in this way, men in only the third decile of the labor force make roughly what women make at the median.

Women consistently earn less than men at every decile of compensation: including entry level jobs. This early divergence in pay, when workers have similar experience, suggests that women are simply not getting equal pay for equal work. Many variables contribute to the gender wage gap, but one of these is that women systematically do not receive equal pay. 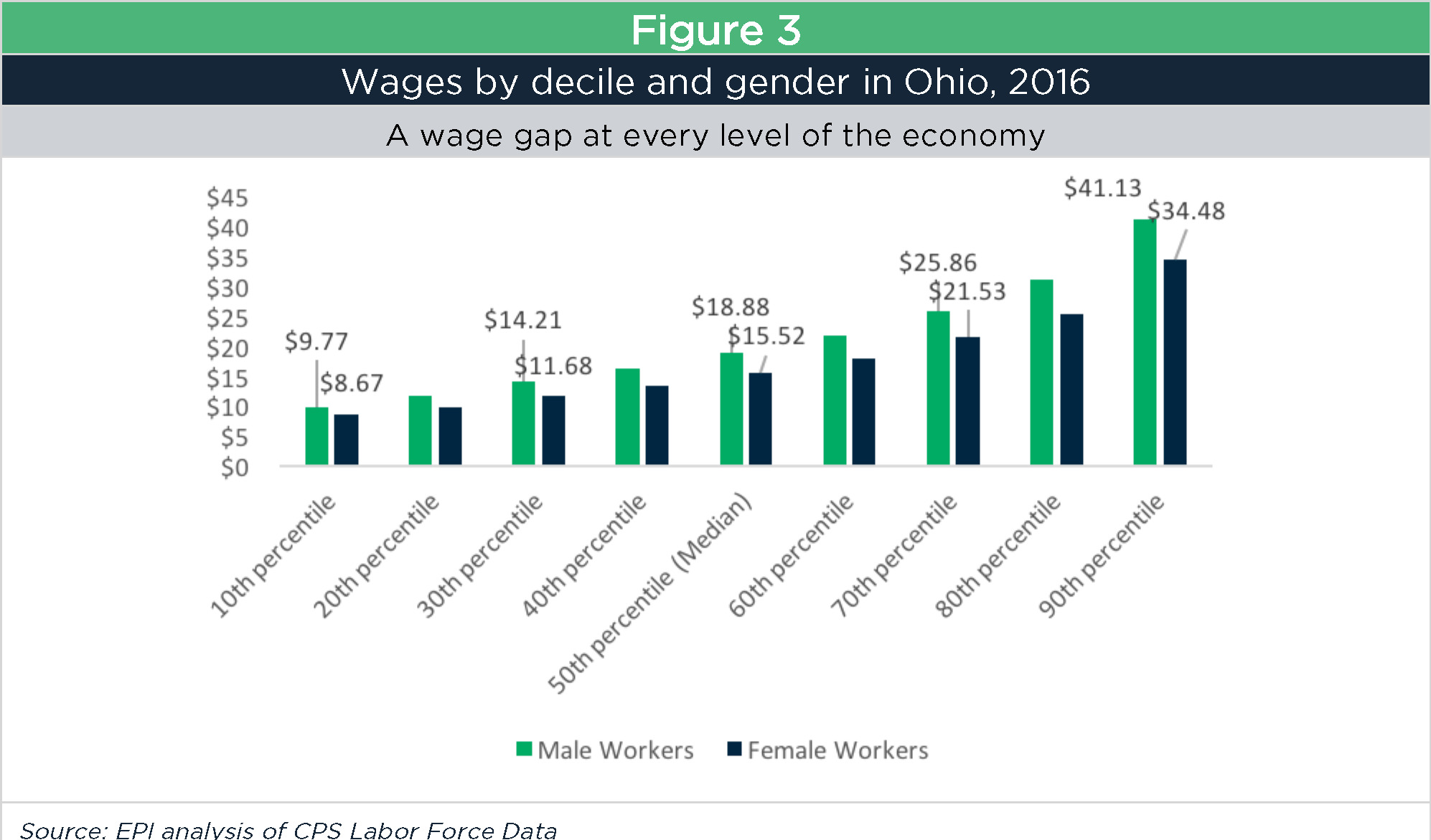 Who does the gap affect?

The wage gap exists at every level but increases among top earners. Over time, the wealthy have grabbed a larger share of the economy – and they are disproportionately men.[2] Wealth concentration hurts women and workers of color. Women face higher poverty rates than men (17 percent compared to 14 percent).[3] As overall wage inequality increases, so does the gender pay gap.

Female-dominated jobs are often low wage. Childcare workers, for instance, are 90 percent women. Despite their importance to families and the economy, childcare workers earn less than 97 percent of all workers in the state.[4] Raising wages in caring occupations would improve the care our children and families receive and many female workers get ahead. But occupational choice alone does not explain the gap. As shown below, in every one of the top 20 most female-dominated professions, men earn more than women, in Ohio and nationally. 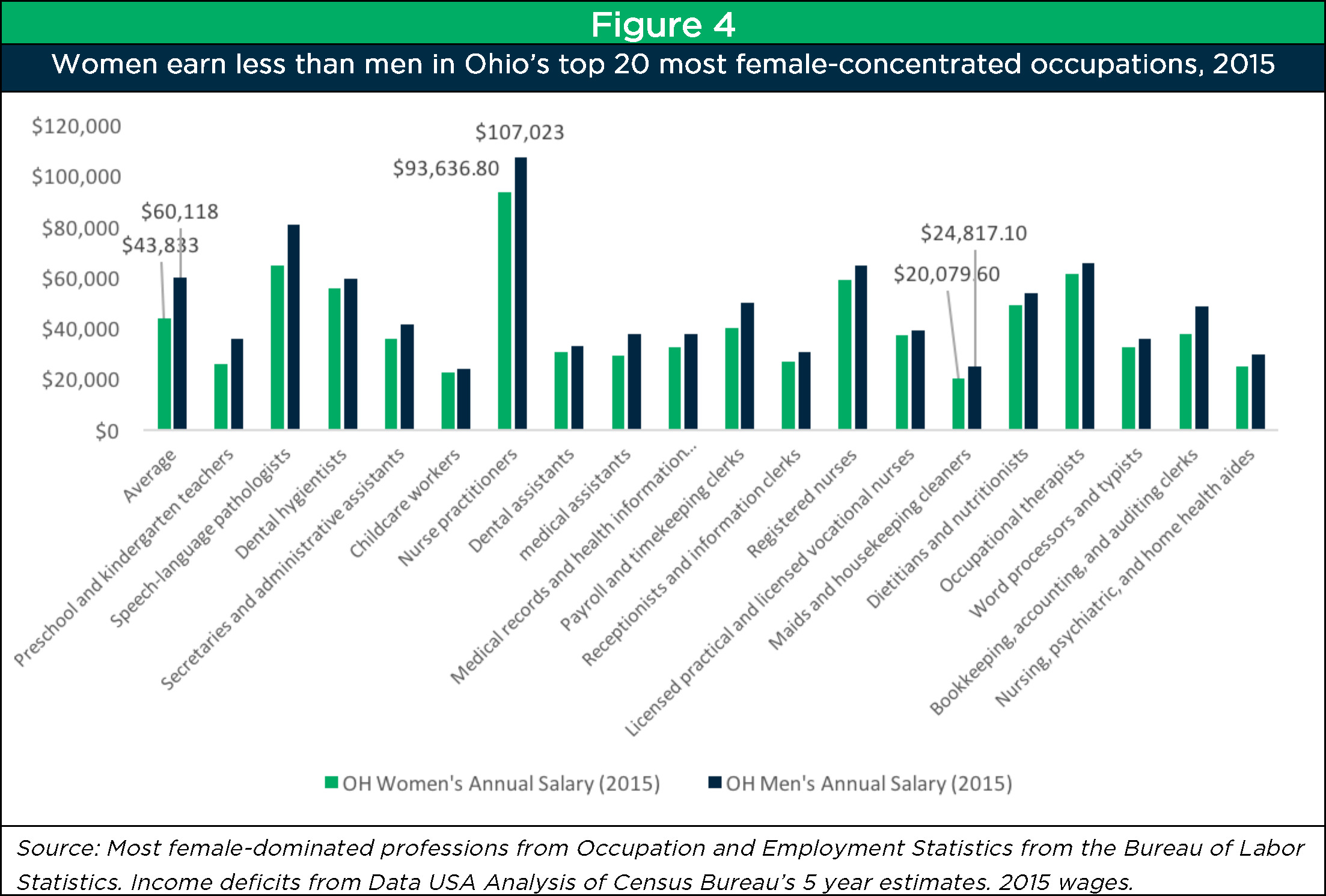 Participation in the workforce 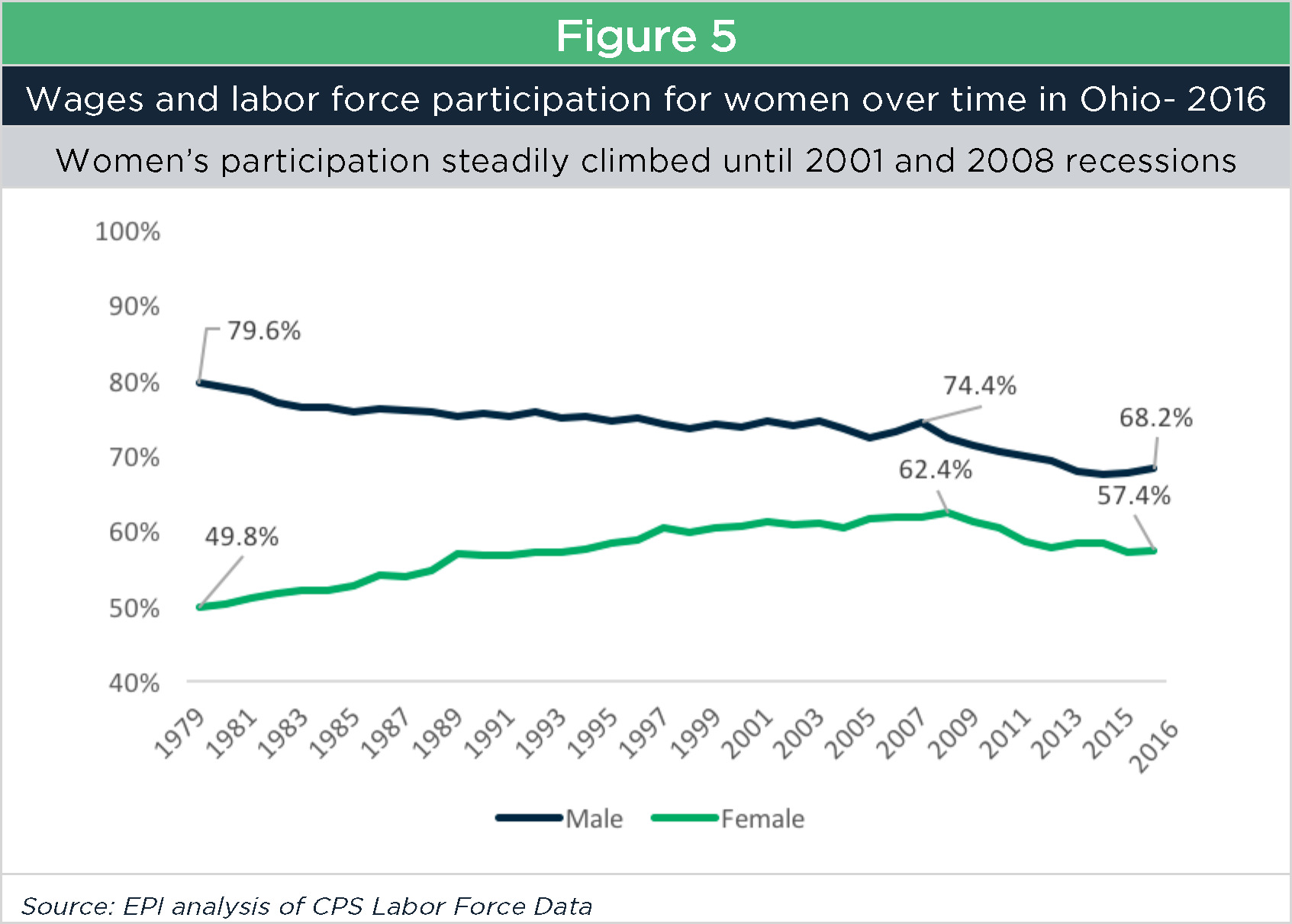 In Ohio, more women attend college than ever before. Nationwide, women are slightly more likely than men to have completed high school, some college, an associate’s degree or a bachelor’s degree and equally likely to have completed an advanced degree. Since 1940, Americans have been on a steady upward educational path, becoming more likely to complete both high school and college. Education leads to higher wages: median wages for women with at least a bachelor’s degree are nearly double those of women with just a high school diploma.[5] Unfortunately, education alone will not bridge the wage gap. Men earn much more than women even when they have the same education levels – between 21 percent and 36 percent more. In fact, women with some college or even an associate’s degree make less, at the median, than men with just a high school diploma. 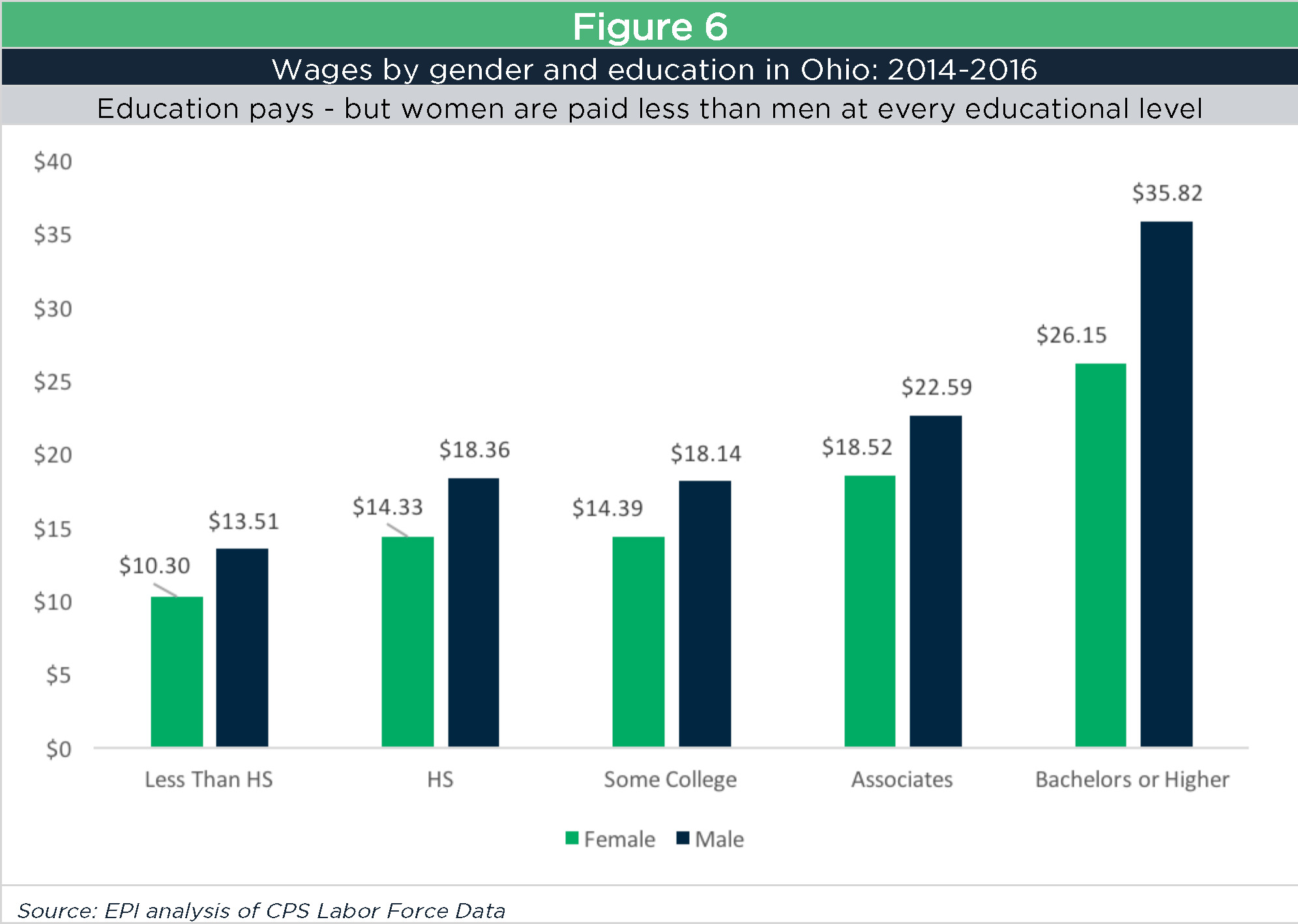 There are less quantifiable reasons for the gender wage gap. Among these are hiring, promotion, and negotiation practices that serve men better than women. Women are underrepresented in the management roles that make decisions about hiring, compensation, promotion and other aspects of other people’s careers.[6] Employer bias may lead to lower pay for women in traditionally male-dominated occupations like computer science or construction, two of the careers with the lowest rates of women as managers.

Young women may believe that negotiating for higher pay is not an option for them, according to a study[7] by Harvard professor, Hannah Riley Bowles. Women are far less likely to negotiate - perhaps for good reason. According to Bowles,[8] women face a higher social cost for negotiating than men, meaning that employers are less inclined to work with them.

Policy that tackles gender-based economic inequality can help anchor families struggling to build financial foundations. Since overall income inequality widens the wage gap, the most effective way to fix shrink it is from the bottom up. A livable wage, collective bargaining power and stronger work supports are all ways to promote gender pay equity. 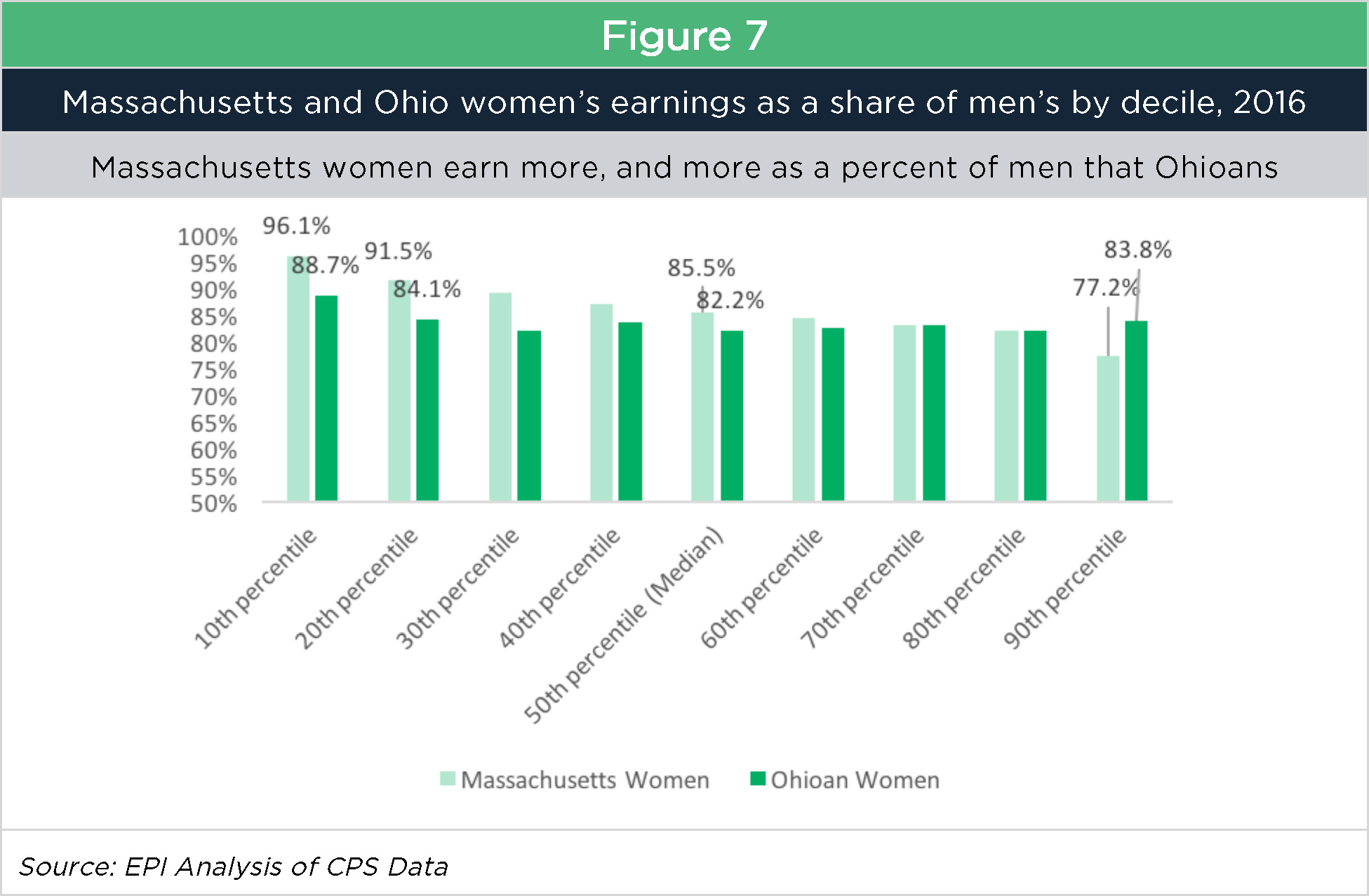 Equity across the earnings spectrum is crucial, but women are more concentrated in low-paying jobs than men. In Ohio, a $15 minimum wage effective by 2025 would pull the bottom 30 percent of earners up and narrow the pay gap.

One of the best ways to tighten the wage gap is to give women the power to come to the negotiating table. Unions help ensure that all employees, including women, receive fair wages and have safe working conditions. The numbers couldn’t be clearer on this: Women’s share of earnings as compared to men’s increase by nearly 16 percent when they are unionized. In Ohio, unionized women make 93 percent of their male counterparts. Non-unionized women make 77 percent. 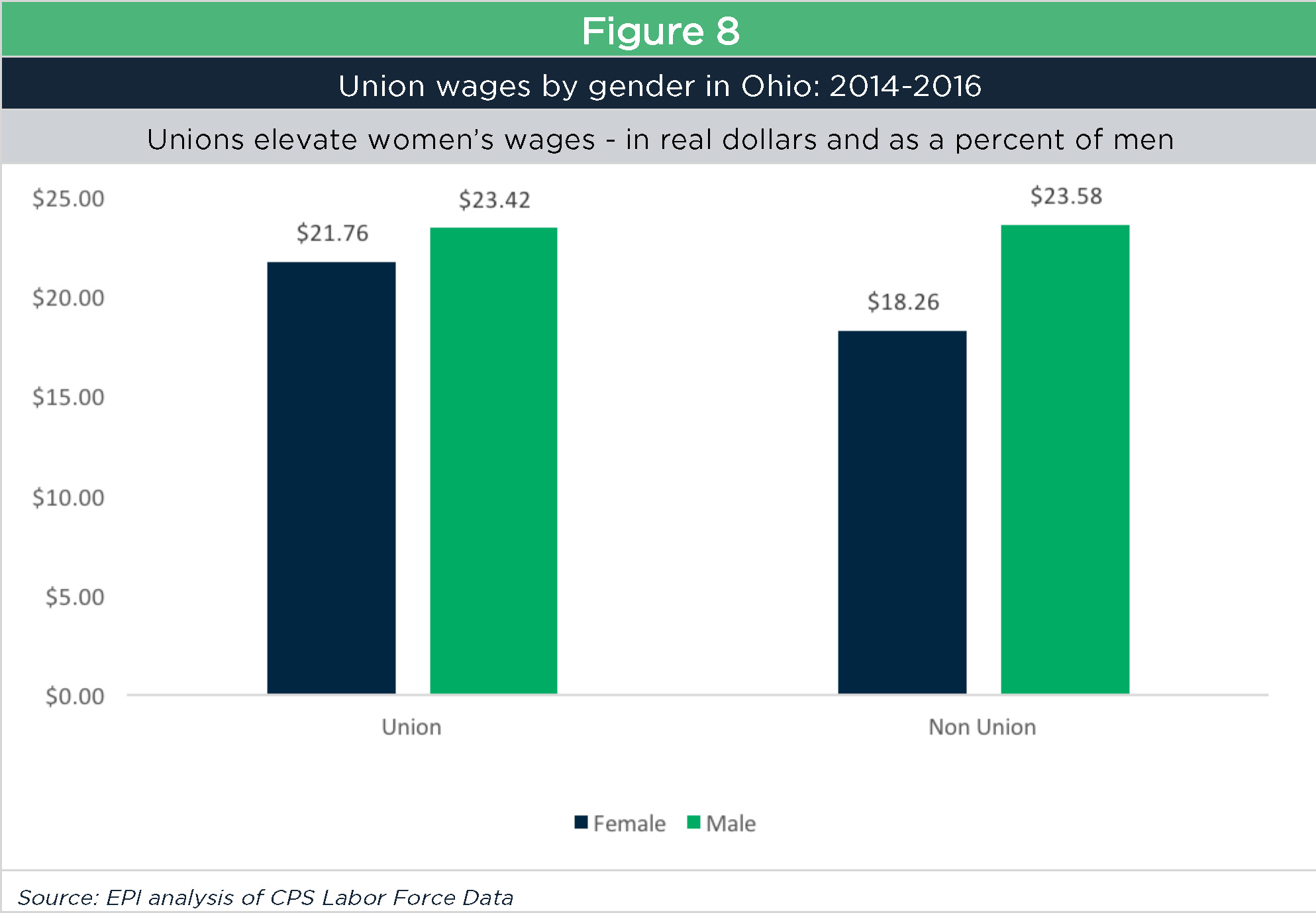 Better public services and work supports will help women and their families have more opportunity and security. By investing in early care and education and strong public schools, Ohio policymakers can help working mothers balance the challenges of raising a child and working full time. Increasing childcare eligibility to 200 percent of the poverty line[10] would help parents who want to work stay at work.

The gender wage gap persists, and hurts the quality of life for working women across Ohio and the nation. In 2017, we still have an economy that pushes women’s wages down – regardless of occupation or educational attainment. Fortunately, there are policy solutions that can narrow the gap, elevating working mothers, sisters, and daughters (and single women, too). Strong wage and work support can get us there.

[1]People are part of the workforce if they are working or are unemployed but actively seeking work.

[3] American Community Survey 5-year estimate, population for whom poverty status is determined by age and sex

[6] Bureau of Labor Statistics, U.S. Department of Labor, The Economics Daily, 39 percent of managers in 2015 were women on the Internet at https://www.bls.gov/opub/ted/2016/39-percent-of-managers-in-2015-were-women.htm

Gender and the Ohio workplace