Still working for too little in Ohio

Still working for too little in Ohio

All working people — no matter their race, gender, or the kind of job they do — deserve to be paid enough to live a good life and provide for their families. But in 2021, too many Ohioans weren’t paid enough to make ends meet: Four of Ohio’s 10 most common occupations, employing about 452,900 Ohioans, paid so little that a worker with a family of three would need food aid to feed their family. Labor market pressures caused by COVID-19 and the federal policy response led to higher pay in eight of Ohio’s 10 most common jobs. This is good news for a very stressed labor force, but despite recent growth, none of the 10 most common jobs are paid much more at the median than they were at the turn of the century — and some are paid less. High inflation rates could erase the pay increases. 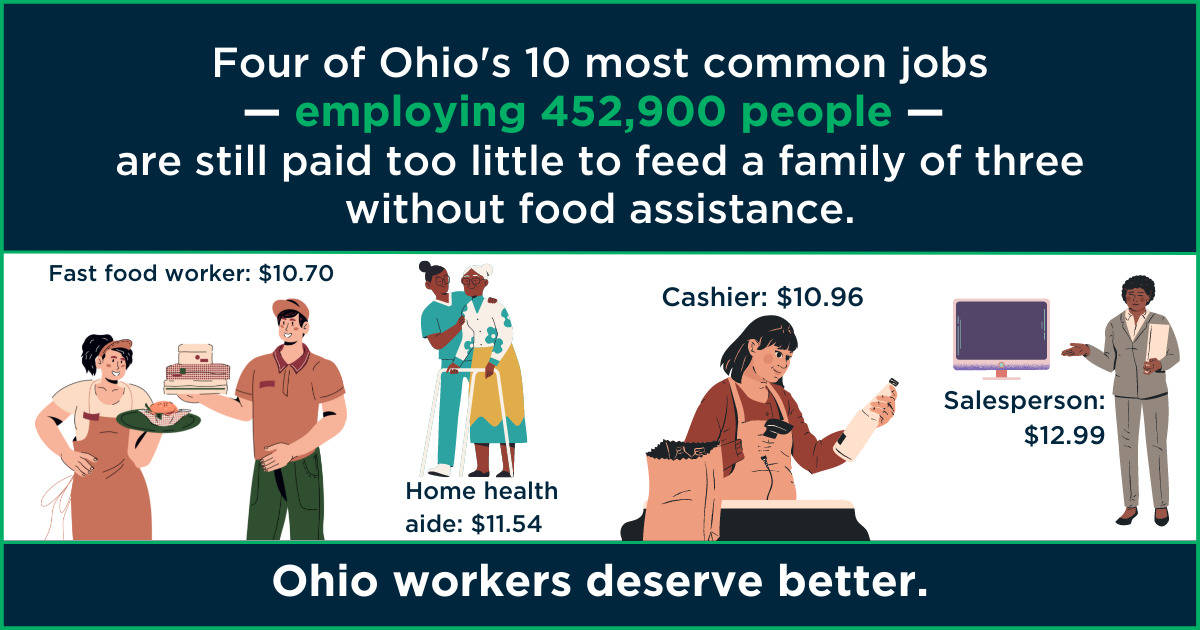 COVID-19 displaced more than 1 million Ohioans from work in March and April 2020. Though some of their jobs have yet to return, federal spending has helped steer Ohio to a recovery on track to restore them three times faster than recoveries from recent recessions. Further work is needed to ensure that resources go to the most impacted. By March 2022, Ohio had recovered 82.9% of the jobs destroyed by COVID-19, but that left 146,100 jobs still missing. They are disproportionately low-paid jobs. Our policy response should include replacing low-paid jobs with better ones, and especially ensuring that the people who held those jobs are included in the recovery.

The jobs we see after recovery may look different from the ones destroyed by COVID-19. New Occupational Employment and Wage Statistics data through May of last year give a snapshot: The pandemic, recession and recovery have reshuffled the 10 largest occupations in the state.

COVID-19 disproportionately destroyed the jobs of low-paid Ohioans, occupations that were precarious even before the pandemic. Many of these jobs have yet to return to their 2019 levels of employment. These jobs are more likely to be held by Black and brown Ohioans, and women of all races. Their disproportionate loss has exacerbated inequity by directing much of the harm caused by COVID-19 to those Ohioans with the fewest resources to withstand it.

There are 55,710 fewer fast food and counter workers compared to 2019. So many waiters and waitresses were laid off during COVID-19 that they dropped out of the top 10. Among the most common pre-COVID Ohio jobs, six occupations lost jobs, while four gained. These changes reflect new trends in the Ohio economy: As Ohioans avoided restaurants and moved their shopping online, more people went to work as stockers and order fillers, and customer service representatives, and more left or were laid off from their jobs as retail salespeople and cashiers. During the pandemic, hiring of registered nurses and home health aides rose.

A new entrant into the top 10 Ohio jobs also reflects the changed labor landscape: General and operations managers are now among the most common jobs in Ohio, suggesting that better paid Ohioans and those in positions of relative power in the labor market were much more likely to keep their jobs than low-paid Ohioans. In Ohio and the Metropolitan Statistical Areas (MSA’s), general manager pay fell from 2019 to 2021 as hiring rose, suggesting that many companies hired more lower-level management. Overall, general managers were the highest paid among those who held one of the 10 most common jobs. 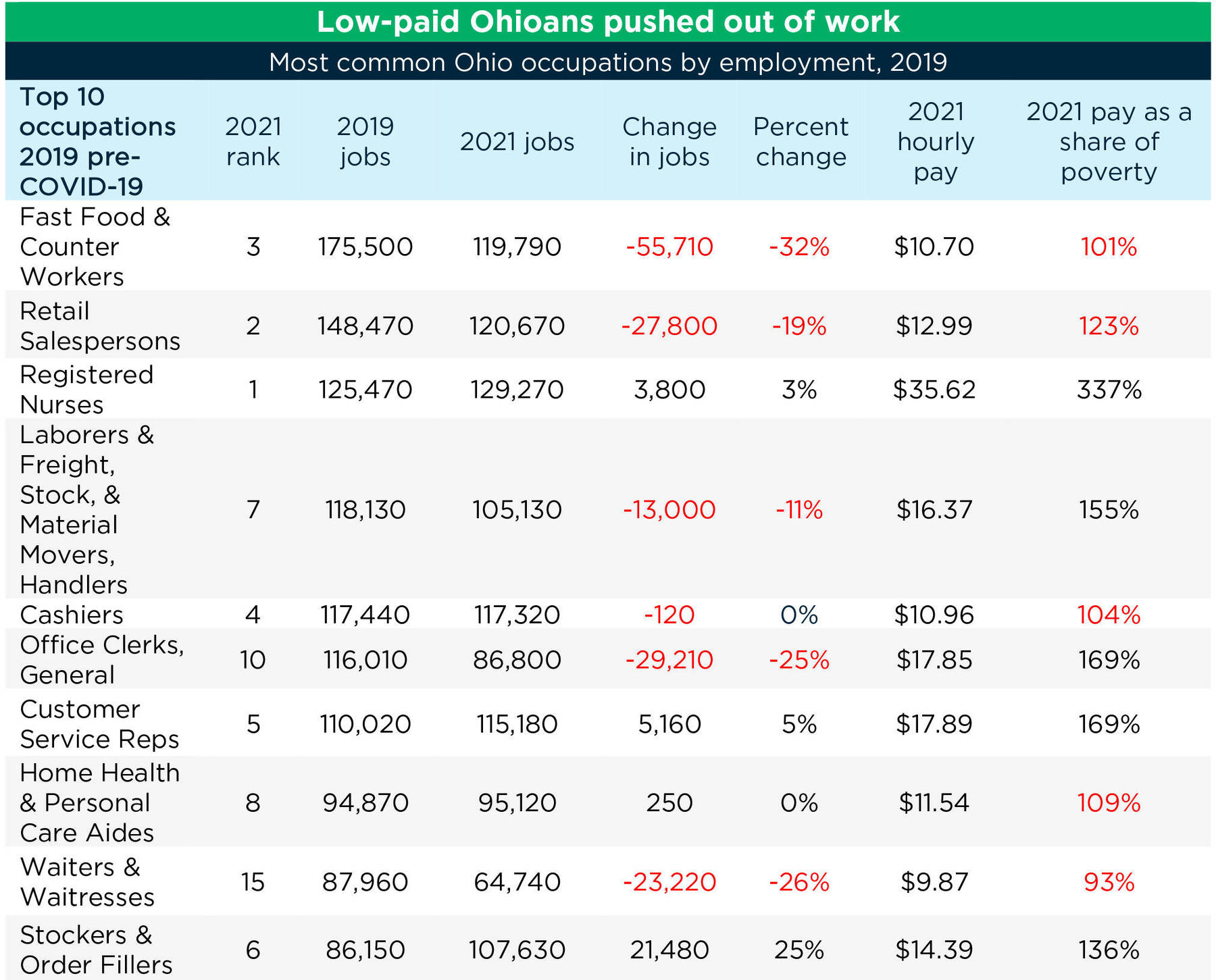 Source: Bureau of Labor Statistics (BLS), Occupational Employment and Wage Statistics (OEWS) Survey, May 2000, May 2019, and May 2021. Estimates, available here, accessed April 12, 2022. Largest detail occupations in Ohio by employment. Median annual earnings shown as a share of the poverty threshold for a family of three in 2021 ($21,960). The gross monthly income threshold for food assistance is 130% of poverty ($28,548) or less.

Wages up for many, but most working people are still underpaid

Labor market pressures created some positive movement for workers long neglected by many policymakers and underpaid by their employers. Federal stimulus stabilized people’s incomes. The health care crisis created a host of urgent needs. The disruption COVID-19 caused to daily life helped policymakers and the public to at last acknowledge certain essential workers, from caregivers to grocery food stockers. As a result, pay increased for eight of Ohio’s 10 most common jobs from 2019 to 2021. Gains ranged from a menial 14-cents-per-hour for cashiers to $2.37 for registered nurses. Home health aides lost 11 cents, and while general managers’ median pay fell, this likely reflected more hiring of lower level managers, not true losses. This overall pay growth recovered lost ground from two decades in which employers pushed wages down; and for four of the top 10 occupations, it still left workers too little to cover the cost of food for a small family. 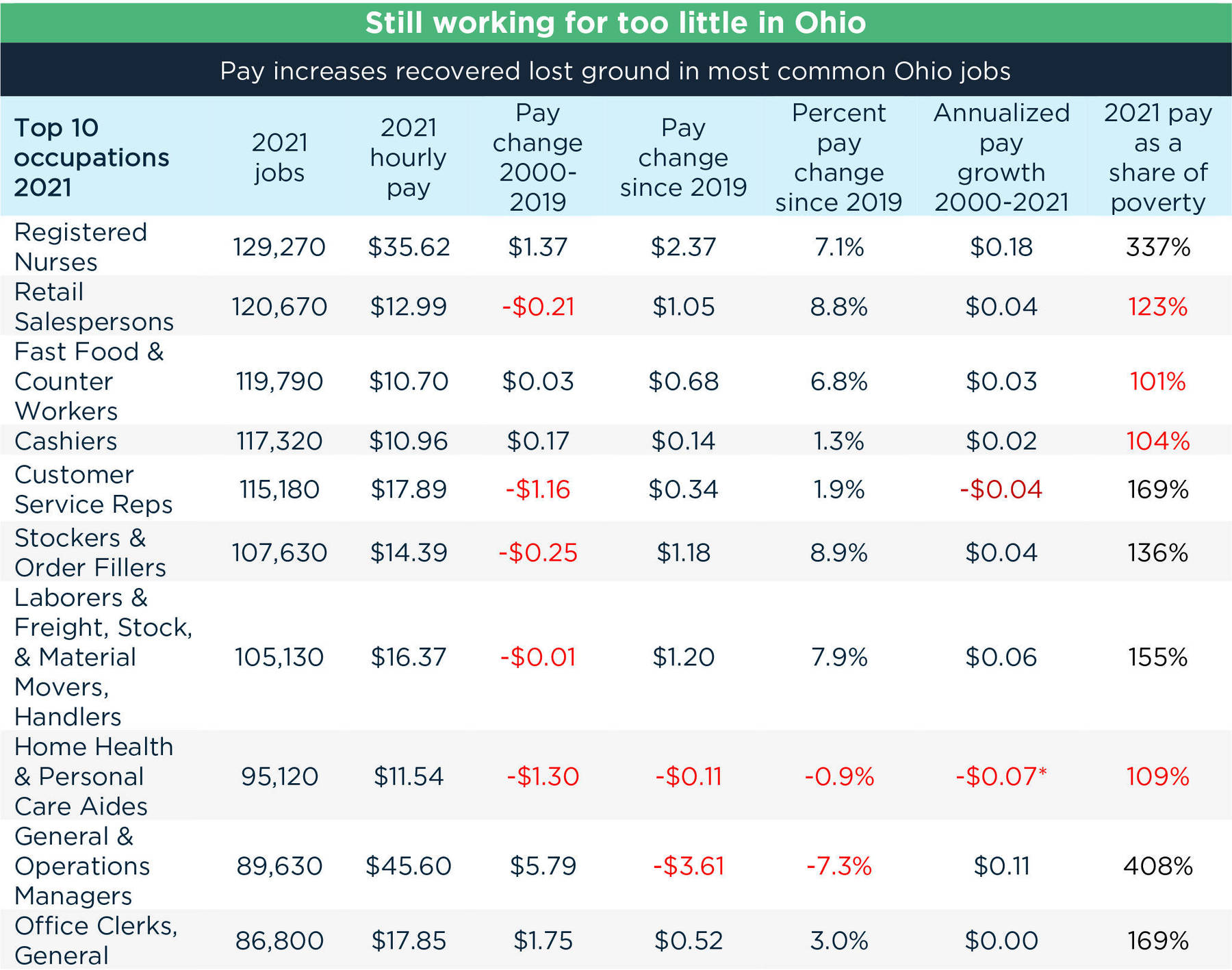 Source: Bureau of Labor Statistics (BLS), Occupational Employment and Wage Statistics (OEWS) Survey, May 2000, May 2019, and May 2021. Estimates, available here, accessed April 12, 2022. Largest detail occupations in Ohio by employment. Median annual earnings shown as a share of the poverty threshold for a family of three in 2021 ($21,960). The gross monthly income threshold for food assistance is 130% of poverty ($28,548) or less. *Home Health & Personal Care Aids were two separate categories in 2000. 2000 wage is a weighted average of the median for Home Health Aids ($8.30), and Personal and Home Care Aids ($8.10). Figures then adjusted for inflation.

For five of the largest categories of work, the increase followed nearly two decades of employers pushing down wages. From 2000 to 2019, employers pushed wages down for home health aides (-$1.30), customer service representatives (-$1.16), stockers and order fillers (-$0.25), retail salespeople (-$.21), and slightly for laborers and freight handlers ($-0.01). By 2021, wages in most top 10 occupations had recovered. Change in pay ranged from home health aides being paid 7-cents-per-hour less to registered nurses being paid 18 cents more.

Overall, workers in Ohio’s biggest occupations are finally getting better pay. Modest wage increases in eight of the top 10 Ohio jobs restore many Ohioans to the pay level of their counterparts two decades ago. The raises also better position them to withstand inflation spikes caused by supply chain disruptions from COVID-19 and Russian war aggression, as well as corporate price gouging. The fact that these gains largely reset typical wages at or near their 2000 levels underscores just how far policymakers have allowed the standard of living for working people to fall.

The erosion of wage and livability in Ohio is the consequence of policy choices. Ohio was once a stronghold for industrial unionism, where everyday people were paid among the highest wages in the nation. It was a destination for immigrants from around the world and from across the nation. Ohio drew formerly enslaved people and their descendants to a better life in the Great Migration from the Deep South and enticed Appalachian people of all races north on Route 23 for unionized work in factories. But policy decisions by state and federal lawmakers over decades have eroded Ohio’s manufacturing base, shrunk its unions, and held wages flat — and in some cases pushed them down.

Without enough public support for people and infrastructure, Ohio never recovered the total number of jobs lost in the 2000s recession. Today we are one of only 13 states that have not restored the jobs lost to the COVID recession. This pattern of recessions setting the state back is not new. Over the last 40 years, deliberate policy choices have enriched the few while making it increasingly difficult for working Ohioans from all walks of life to find stability, let alone a brighter future for their families. Aggressive monetary policies to curb ‘80s inflation decimated Ohio manufacturing jobs. Deindustrialization continued after President Bill Clinton signed the North American Free Trade Agreement and was made worse by post-recession austerity policies. Meanwhile, some powerful corporate and political stakeholders launched attacks on democratic institutions including voting rights and labor unions, that could effectively stand up for working people.

This recovery has changed for the better. The federal government rapidly enacted stimulus measures that met the scale of the economic upheaval and provided direct payment supports to people, keeping the economy going by keeping families going. That has meant a rapid partial recovery from a recession of historic scale.

However, in the years before COVID, too many policymakers neglected employment standards and failed to adapt employment protections for “gig” and contract workers. This, combined with attacks on unionization and collective bargaining, have tilted the balance of power far in favor of employers. In fact, corporations now have so much power that even during a pandemic, they can pressure lawmakers to cut unemployment benefits — just so they can maintain a cheap, available, and disposable workforce. This means that despite a multitude of pressures pushing wages up for the short term, four of Ohio’s top 10 occupations by employment, representing 452,900 workers, paid so little at the median that even working full time, a worker with a family of three would qualify for food assistance (less than 130% of the Federal Poverty guideline). All four of those jobs pay less than the 1968 peak value of the minimum wage, worth more than $13 per hour in today’s dollars.

While the recovery from the COVID-19 recession has helped lift wages for some Ohioans — including many among the lowest-paid — policymakers must do more to ensure that all Ohioans share in the wealth that they have helped create. Even with two years of comparatively strong increases, long-term annual wage growth in top 10 occupations ranged from losses of 7 cents per hour for home health aides to gains of just 18 cents for registered nurses. Over that time, workers’ share of new wealth created in Ohio has shrunk compared to their employers’ share. For working people to ever regain that lost ground, wages must exceed economic growth for some window of time, as corporate profits did for many years. Moderate wage increases since 2019 have helped many working Ohioans be paid closer to the actual value of their work. Yet some Ohioans are still seeking jobs to return to. Policymakers must ensure robust unemployment benefits and pass a livable minimum wage that ensures every Ohio job pays enough to cover the basics.