Testimony on HB 166 to Finance Subcommittee on Agriculture, Development, and Natural Resources

Testimony on HB 166 to Finance Subcommittee on Agriculture, Development, and Natural Resources

Good morning, Chair Hoops, Ranking Member Hicks-Hudson and members of the committee. Thanks you for the opportunity to submit my testimony in writing. My name is Hannah Halbert and I am project director for work and wages at Policy Matters Ohio, a nonprofit, nonpartisan organization with the mission of creating a more prosperous, equitable, sustainable and inclusive Ohio.

Ohio has a wage theft problem and there’s nothing new in the state budget proposal to address it. Wage theft occurs when employers fail to properly pay workers for all work performed. It includes paying less than the minimum wage, paying less than the prevailing wage, not paying for all hours worked, or failing to pay overtime compensation. Wage theft also includes other forms of payroll fraud, such as when a business conceals its true tax liability to a government agency by misclassifying employees or paying for business transactions in cash without keeping appropriate records.

The Bureau of Wage and Hour Administration housed within the Industrial Compliance section of the Department of Commerce investigates and enforces Ohio’s employment laws, including the minimum wage, overtime, prevailing wage and minor labor laws. Ohio’s Bureau is complaint-driven, meaning it responds to the complaints it receives, investigates, makes a determination, and then, when there is a violation, collects back wages and penalties which it then returns to workers.

Funding for the Wage and Hour Bureau is down more than 24% adjusted for inflation since 2010. Today, just five investigators and one investigation supervisor oversee wage theft enforcement for Ohio’s more than 5.5 million jobs.[1] That means Ohio has one investigator for every 932,367 workers. 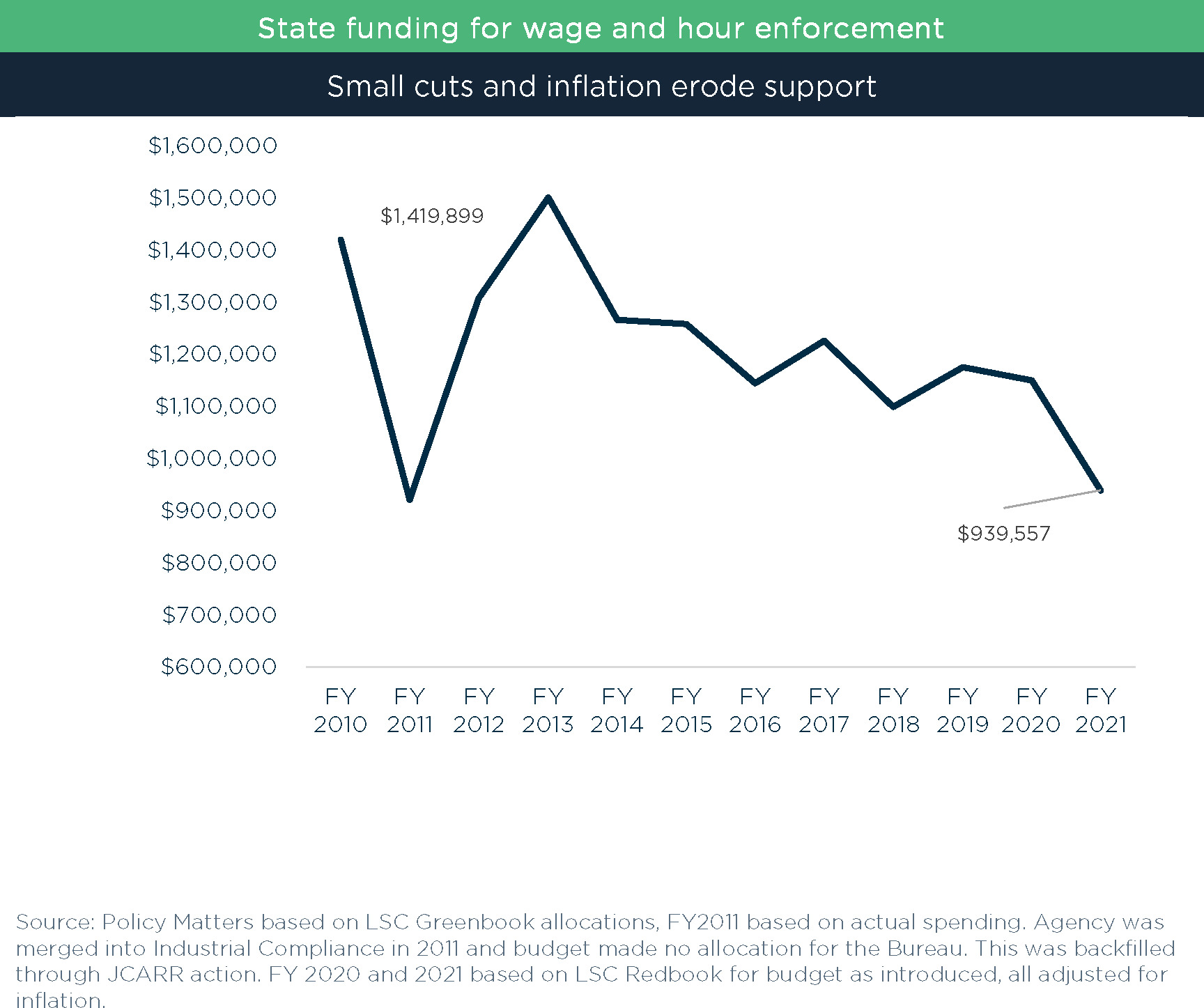 Governor DeWine’s budget proposal cuts Bureau funding for 2020 and 2021. In total, wage enforcement will receive $100,000 less over the next biennium than it did over the last biennium. The small cuts combined with inflation means Ohio will spend 36.7% less on wage enforcement in 2021 than it did in 2010. Ohio will enter a new decade with fewer resources to ensure working people get paid what they earned and Ohio’s policymakers will preside over a growing wage theft crisis.

Failing to invest in wage and hour enforcement has consequences for working people and businesses. Workers have less to support their families. Law abiding business have to compete against employers who skirt the law for their own enrichment. With current funding, the Bureau does a lot with a little. It completed 542 investigations in 2018. The vast majority were minimum wage violations (87.4%).[2] Prevailing wage investigations accounted for 9.8% of their work and 2.8% involved minors.

The scope of wage theft in Ohio far outpaces what the Bureau can do with its meager staff. Ohio is ranked second of the 10 largest states in share of workers experiencing minimum wage violations.[3] After analyzing claims the Plain Dealer found that the Department of Commerce collected only $359,000, or about 10% of the wages owed to victims.[4] The Attorney General’s office and the Commerce Department combined collected just about half as much as victims should have received.

To be effective wage enforcement must be strategic and proactive. Wage violations frequently go unreported because workers fear retaliation or feel they have no recourse. This is further complicated by the changing nature of the economy. The rise of contracting, franchising, and other complex relationships has fractured the traditional employer-employee relationship and made worksite-based enforcement less effective. Union-busting polices mean fewer working people are speaking up together. Employees are more fearful of retaliation and more susceptible to pressure.

Ohio should adopt a strategic enforcement model. This would mean more direct investigations and higher fines for violations. This approach would use dedicated staff to focus on the top of industry structures—the companies that set the rules for the rest of the downline employers. The Bureau would fully enforce the law, impose treble damages against violators, and use complaints to leverage and target more direct investigations of “hotspots.”

The Bureau needs additional staff to move to this more effective model. Current funding simply makes this kind of enforcement impossible. A little can go a long way. An additional $1 million per year would essentially double Bureau funding. This would allow the Bureau to add staff dedicated to pursuing enhanced investigation and bring down the incidence of wage theft in Ohio. Additional funding is a goal in the Wage and Hour Bureau’s current strategic plan. Ohio needs to make it a priority.

Better wage enforcement would make for a more law-abiding Ohio where working people aren’t victimized by law breakers. Legislators across the political spectrum should agree that laws should be enforced and working people should be paid as the law requires.