Ohio’s recovery has been a slow slog since 2009. The state has added jobs, but has grown by a very meager 1.9 percent. That sluggish growth has not been enough to pull large numbers of workers back into the labor market. Ohio is still 200,000 workers short of its pre-recession labor force. Although some regions like Central Ohio have fared far better than places like Appalachia, the state is, on the whole, stuck. The same is true when for blue collar job growth in Ohio. 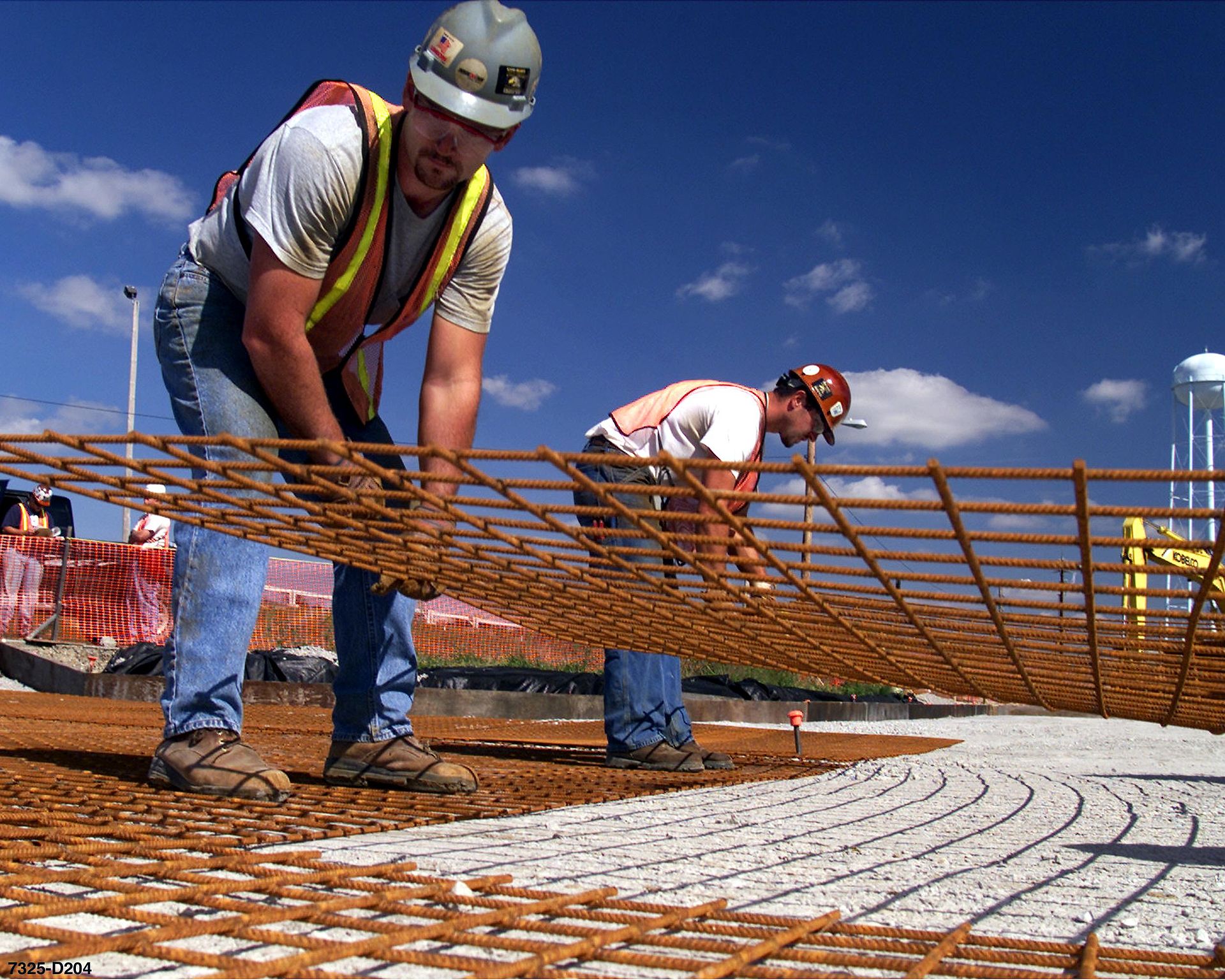 Blue collar jobs, short-hand for jobs in manufacturing, mining and logging, and construction, have not yet recovered from the last recession. Even with the fracking “boom,” mining and logging is down 3.4 percent. Construction is down 1 percent and manufacturing is down 8.9 percent. During the 2016 election, President Donald Trump promised big improvements for these sectors. The states that voted for Obama in 2008 and 2012 and Trump in the 2016 are among those with the highest shares of blue collar jobs in the nation, according to the Center for Economic and Policy Research. This new quarterly report seeks, in part, to track trends in these sectors.

In the first quarter of 2017, manufacturing, mining and construction added 20,200 jobs, growing by 2.2 percent. However, those gains were offset by losses in other sectors. Overall, Ohio added 15,000 jobs, growing by just 0.3 percent. Chart 1 shows how each sector has fared since the start of the Trump administration. 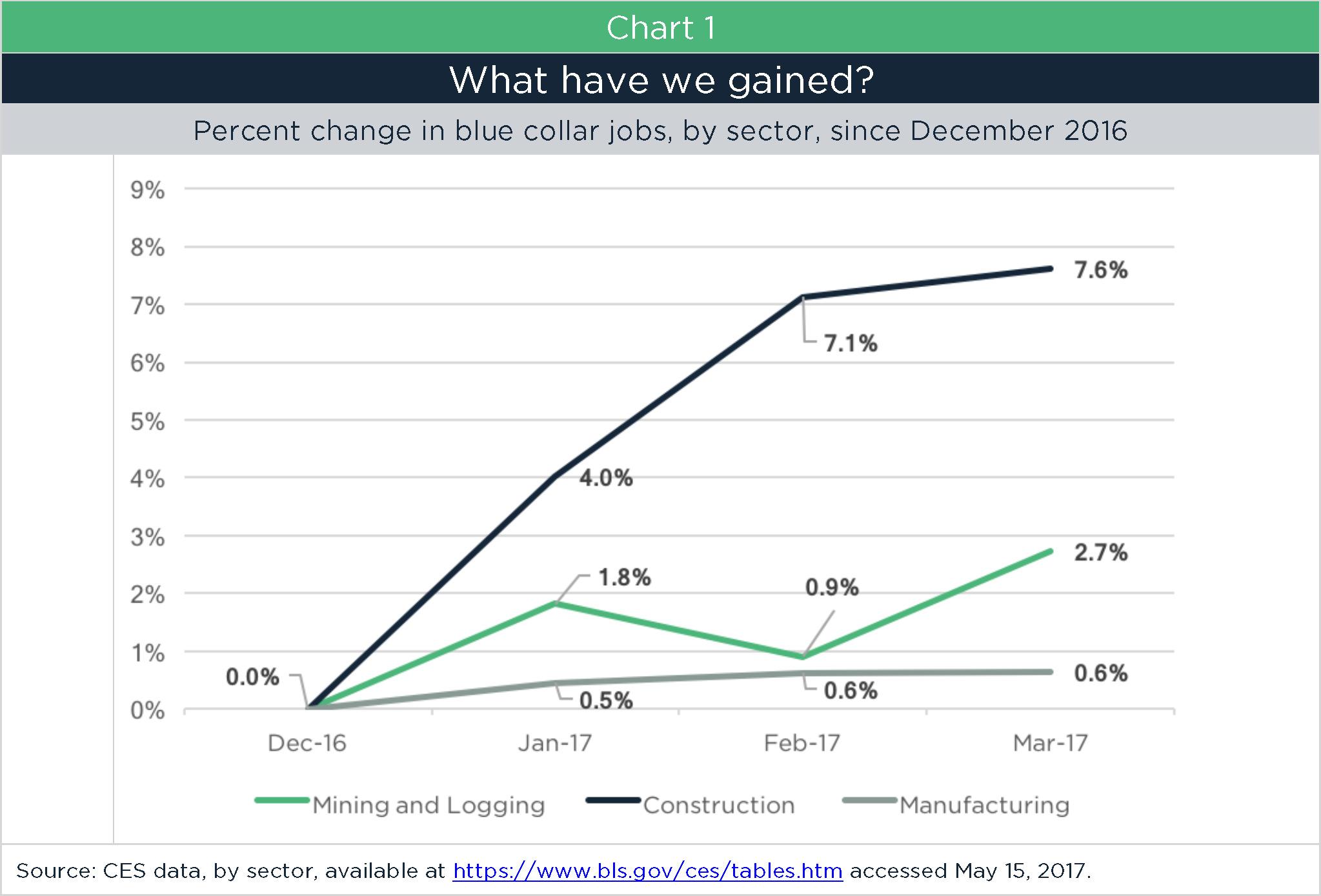 Ohio’s blue collar sectors did add jobs in the first quarter of 2017. Over the last quarter mining and logging gained 300 jobs, construction added 15,500, and manufacturing added 4,400. This is positive news for the state. In comparison to last year’s changes — Ohio’s worst year for job growth since the end of the last recession — Ohio’s blue collar job outlook improved over the last three months. Last year, mining and logging and construction had annual declines of 13.4 percent and 0.9 percent, while manufacturing had an annual growth rate of 0.2 percent. Each sector performed better in the first quarter of this year. Time will determine whether this improvement holds. Ohio needs to add more than 70,000 blue collar jobs just to return to the number the state had at the start of the last recession. 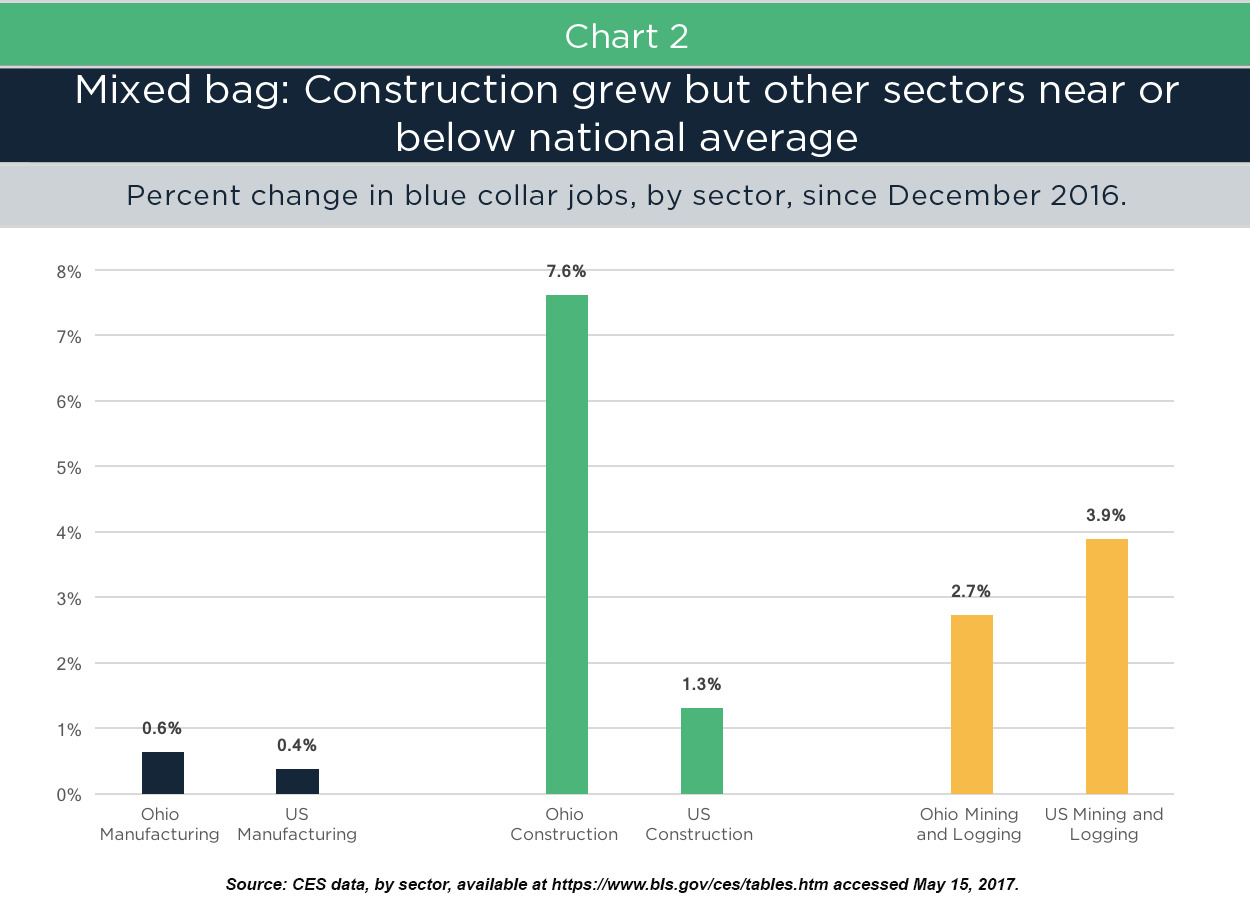 Workers in these sectors have literally shaped the landscape of America. That is especially true in Ohio. In 1990, more than a quarter of all Ohio jobs - 1.2 million - were in these three sectors. In October of 2007, two months before the “Great Recession” officially began, that total dropped below 1 million. Nearly a decade later, 923,300 workers - or 16.4 percent of all Ohio jobs – are blue collar. This is a big shift, primarily driven by losses in manufacturing.

At the start of the 21stCentury, most Ohio jobs were in trade, transportation and utility work (20.5 percent); manufacturing (17.8 percent) and government (14.1 percent). In the 16 year since, jobs in education and health care replaced manufacturing as the second largest sector (17.1 percent). Manufacturing fell to 12.5 percent of all jobs in Ohio, the fifth largest sector. Even with this decline, blue-collar work in Ohio comprised a greater share of the state’s total jobs than in 39 other states. Ohio had the ninth largest share of jobs in manufacturing. Ohio had the nation’s third largest number of manufacturing jobs at the end of 2016 (688,700). Chart 3 shows these changes by sector. 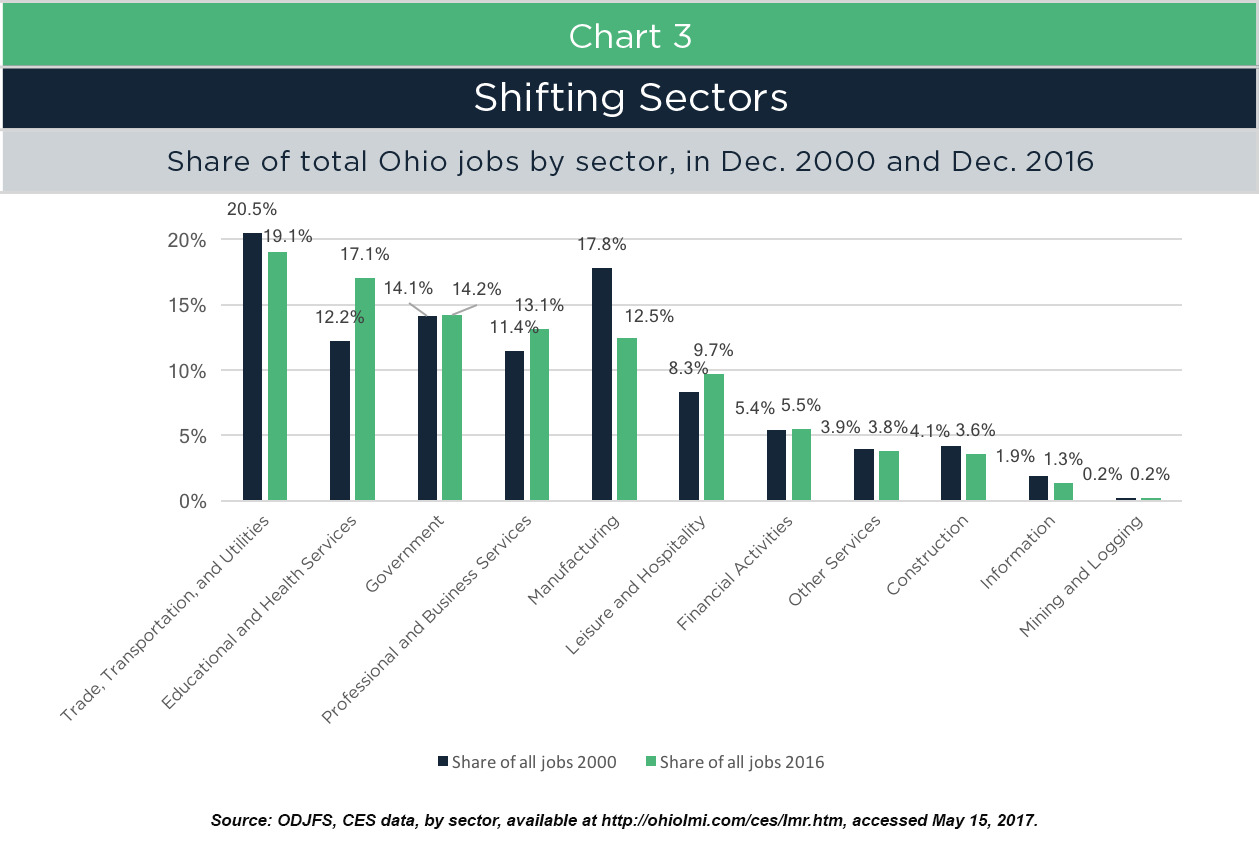 Ohio may have regained the total number of jobs lost during last recession but it never recovered from the 2001 recession. Since then, the state lost 170,200 total jobs. Manufacturing took an especially big hit. Meanwhile, Ohio’s growing sectors like education and health services work, often pay poorly and offer few benefits.

Typical manufacturing work paid enough in wages and benefits so workers could to support their families. In the most recent annual wage data (2015), manufacturing work in Ohio, generally, paid an average annual wage of $58,190. Median wages are lower according to different surveys, but generally this work is considered middle class jobs. The rising sectors do not offer the same returns to workers. Jobs in health care and social assistance paid an average annual wage of $44,668. Education jobs paid an annual average wage of $34,975--an amount that would not alleviate the need for food assistance for a family of four. In addition to lower average wages, many jobs in the health care and education sectors often require education credentials just to enter the field.

These changes, along with eroding unionization, are not without consequences. Seven out of the 10 most common jobs in the state are in occupations that have an annual median wage less than 130 percent of the poverty level for a family of three. This means a typical worker in that field could work full-time, year-round and still need food assistance to feed their family. This has not always been true in Ohio. In 2000, just four out of the 10 most common jobs would have left a working family in this position.

Eight of Ohio’s largest occupations in 2016 also were among the largest occupations in 2000. Six of those now pay less as a share of poverty than they did in 2000. Two - general and operations managers (407 percent of poverty) and team assemblers (167 percent of poverty) dropped from the top 10 list. These sectors were eclipsed by jobs paying far less as a share of poverty: waiters and waitresses (94 percent) and stock clerks (117 percent). It is not surprising that the Ohio poverty rate is stubbornly high at 14.8 percent, nearly four percentage points higher than in 2000. 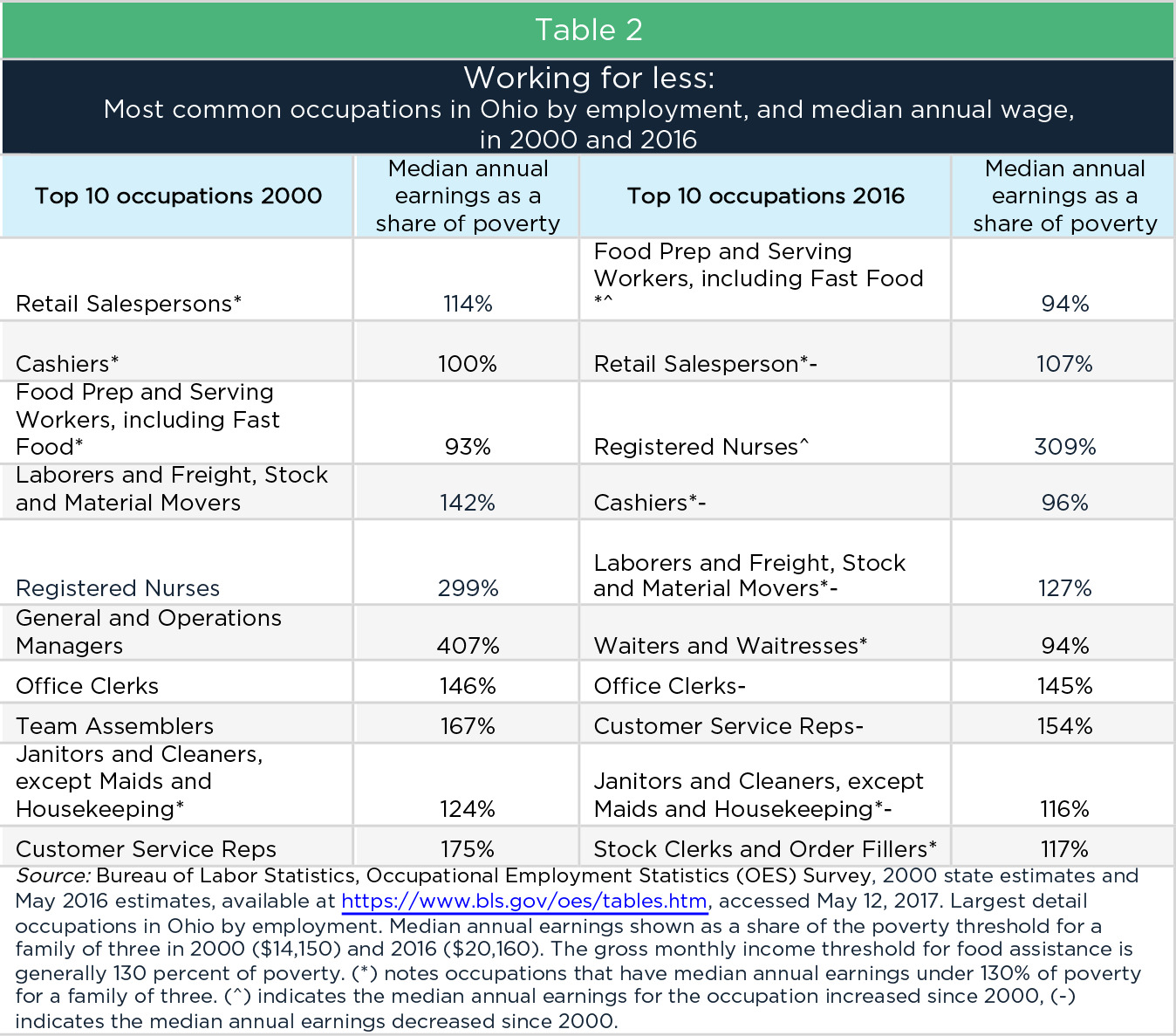 Too many jobs at the bottom pay too little and many pay less as a share of poverty than they did a decade and a half ago. Trade and automation has eroded Ohio’s middle class, which was built largely on manufacturing. Growing sectors have not brought growing wages. For a generation, Ohio’s economic policy has been built on the premise that reducing costs to employers would lead to a higher standard of living for all. It just does not work. Policy makers have opened up international labor markets without basic employment standards, driven down unionization rates, suppressed basic worker protections and cut taxes for the wealthy and corporations. As a result, Ohio has seen increased inequality and poverty, despite higher levels of worker education. Bringing back blue collar work without addressing wages and worker power will do little to offset these trends.

A disconnect to economic opportunity
April 07, 2015

A disconnect to economic opportunity
April 07, 2015