Higher education prepares students to meet future challenges and be productive members of society. Yet, in the 2020-2021 state budget, Ohio policymakers continue to starve public colleges and universities. Funding for State Share of Instruction (SSI), the main state funding for public colleges, goes backward once projected inflation is considered. SSI funding is directly tied to the cost of tuition, which means tuition rises when funding drops.

The budget passed by the House only increases SSI by 1.1% and 1% for fiscal years 2020 and 2021 for Ohio’s 14 public universities, 24 regional branch campuses, and 23 community colleges. Over the next two budget years, SSI would increase by just $41.8 million, or 2.12%, far less than the projected inflation of 4.2%. By failing to have funding keep pace with inflation, lawmakers are asking public colleges to do more with less. Ohio policymakers set an official goal of increasing the share of residents holding a degree or high-quality certificate to 65% by 2025. That commitment rings hollow when lawmakers fail to provide the system with the resources needed to meet it.

The House budget proposal authorizes public colleges to increase tuition and general fees by no more than 2% for academic years 2019-20 and 2020-21. It also requires public universities to establish tuition guarantee programs, which set a tuition rate for a cohort of students who will graduate at the same time. These students would pay a fixed rate for tuition and general fees for four years. Currently, 11 of 13 public universities have undergraduate tuition guarantees. These keep costs lower for students but don’t address why costs are so high: reduced state funding for public colleges. Tuition guarantees coupled with flat funding means public universities will struggle to do more with less.

In the immediate wake of the recession, policy makers slashed funding for higher education. Instead of investing in the future, the state cut taxes for the wealthy and corporations. Since the recession, funding for public colleges increased slightly but did not keep pace with inflation. SSI Funding in 2021 would be less than in 2006 adjusted for inflation (see Figure 1). Subpar funding means colleges have less money to provide quality education and provide supports that help students graduate on time with less debt. An analysis by the Center on Budget and Policy Priorities found from 2008 to 2018, adjusted for inflation Ohio spent $1,304 less, 18.1%, per college student. 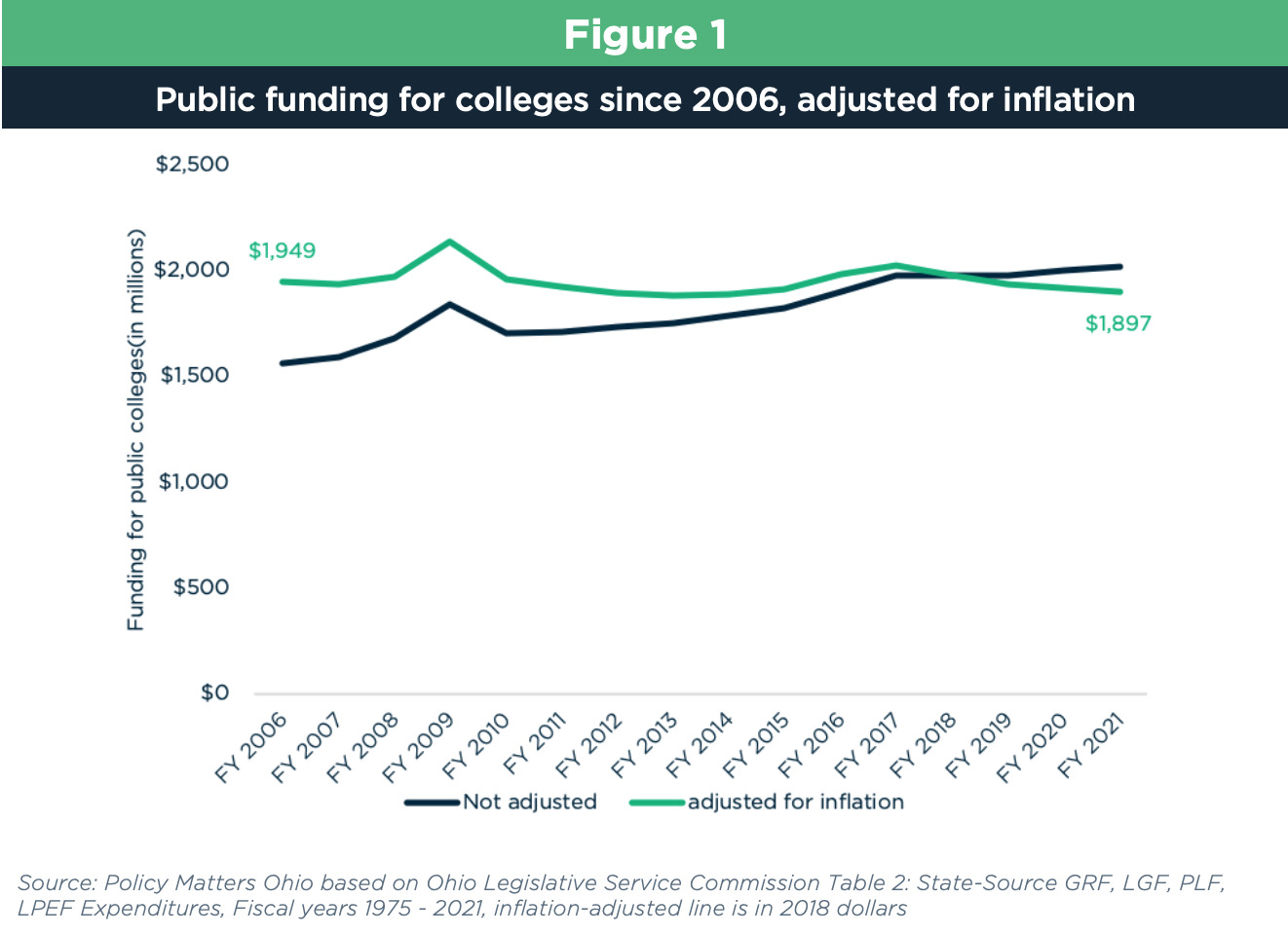 When they lose state funding, colleges shift costs to students. For fiscal year 2019, students paid an average tuition of $9,801 at main campuses, $5,951 at branch campuses and $4,497 at community colleges, all of which were higher than the national average. The average cost of room and board at main campuses is $11,159.

High tuition and poorly funded need-based aid contribute to Ohio ranking 45th worst in college affordability. The Institute for Research on Higher Education found on average the lowest-income families ($30,000 or less) would need to spend 81% of their income for one year of the net price of a public university (tuition, fees, room and board minus financial aid); and 38% for community college. Families with incomes between $48,000 and $75,000 would spend 31 and 15%, respectively. As a result, 64% of Ohio’s class of 2016 with bachelor’s degrees has student debt, which averages $30,351 per graduate.

Ohio’s insufficient support for higher education does not align with the state’s 65% attainment goal. High tuition deters students from pursuing a degree or credential. It makes it difficult for students attending public colleges in Ohio, especially low-income students to complete their degrees. The state can raise the revenue to invest in higher education by reversing tax cuts for the wealthiest and closing unproductive tax loopholes. At a minimum, state policymakers should consider funding higher education at an additional 5% per fiscal year and indexing SSI to inflation. Getting a post-secondary degree is not only good for students, the benefits spill out to our communities and across the state. Ohio’s budget should reflect this and make public colleges and universities a priority.

Below the Curve: Higher Education Opportunity in Ohio
May 30, 2006

Below the Curve: Higher Education Opportunity in Ohio
May 30, 2006