We all benefit when everyone has the ability to pursue their dreams. For many, that means getting a college degree or high-quality certificate. In Ohio, the high cost of college puts that out of reach for too many students. Ohio provides need-based aid, through a program called the Ohio College Opportunity Grant (OCOG), which is essential to helping students from low-income backgrounds attend college. Unfortunately, OCOG excludes over 110,000 community college and regional campus students, who are more likely to come from low-income families. Ohio also shortchanges students at Central State University, a public Historically Black College and University (HBCU). Low-income students and students of color are most likely to be left behind.

High tuition and other costs keep many college students from succeeding. Ohio is ranked 45th in college affordability by the Institute for Research on Higher Education, based on the percentage of income required to pay for the net price of college (tuition, fees, and room and board minus financial aid). Students whose families have incomes below $30,000 (nearly a quarter of all families) would need to spend 81% of their income to pay for one year of the net price of a public university and 38% for community college. For families making $30,000 to $48,000, it costs 39% and 27% of income to pay for public university and community college, respectively.[1] Better OCOG policy that includes the cost of books and living expenses can make college more affordable and expand access to more Ohioans.

OCOG is extremely underfunded. Ohio is ranked 33rd among states and among the lowest in the Midwest in need-based aid per-capita.[2] In 2010, when the legislature replaced the Ohio Instructional Grant (OIG) and the OIG part-time grant with OCOG, the goal was to invest $250 million per year in aid. In 2008-09 we came close to the target by spending down the remaining OIG funds. With inflation that number would be significantly higher than $250 million today, yet we spend just $101 million now, slated to go up to $145 million in 2021.[3] 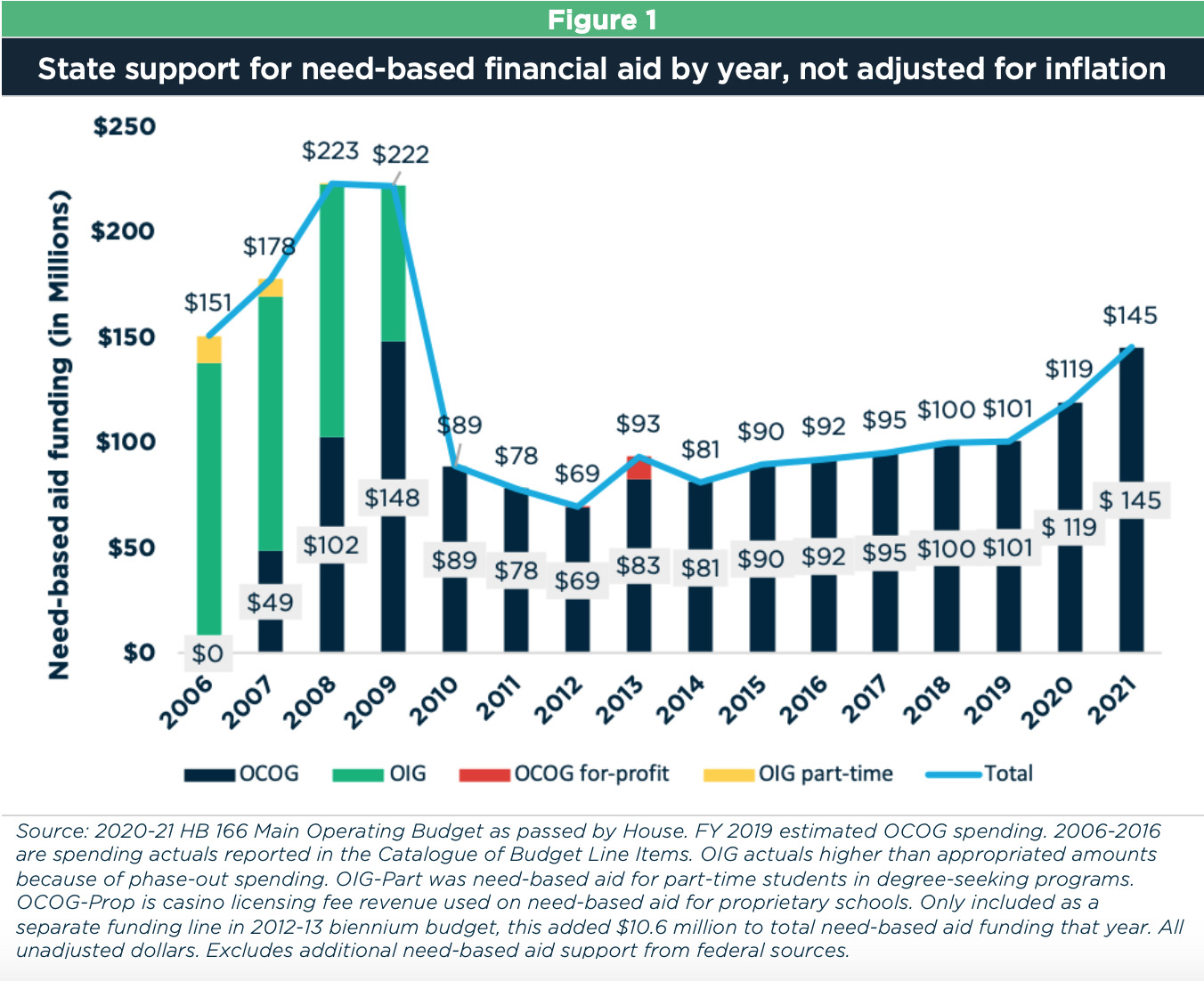 The House budget proposes an increase of 18.2% for fiscal year 2020 and 21.8% for 2021, which would bring OCOG to $145.2 million by the end of the biennium. The governor’s proposal included $3 million a year to OCOG for textbooks and instructional materials for students at community colleges and regional campuses.[4] The House proposal moves this money out of OCOG and into a separate Textbooks and Instructional Materials Fund. These are important steps in the right direction, but they are not enough to bring OCOG back to pre-recession levels. In 2021, funding for OCOG would be $77.8 million less than in 2008, not considering inflation (see Figure 1).

OCOG is for Ohio residents who attend an Ohio college. To be eligible, a student must have an Expected Family Contribution of $2,190 or less, as determined by the Free Application for Federal Student Aid (FAFSA).[5] Maximum OCOG awards are based on a student’s type of school and enrollment status (see Table 1). 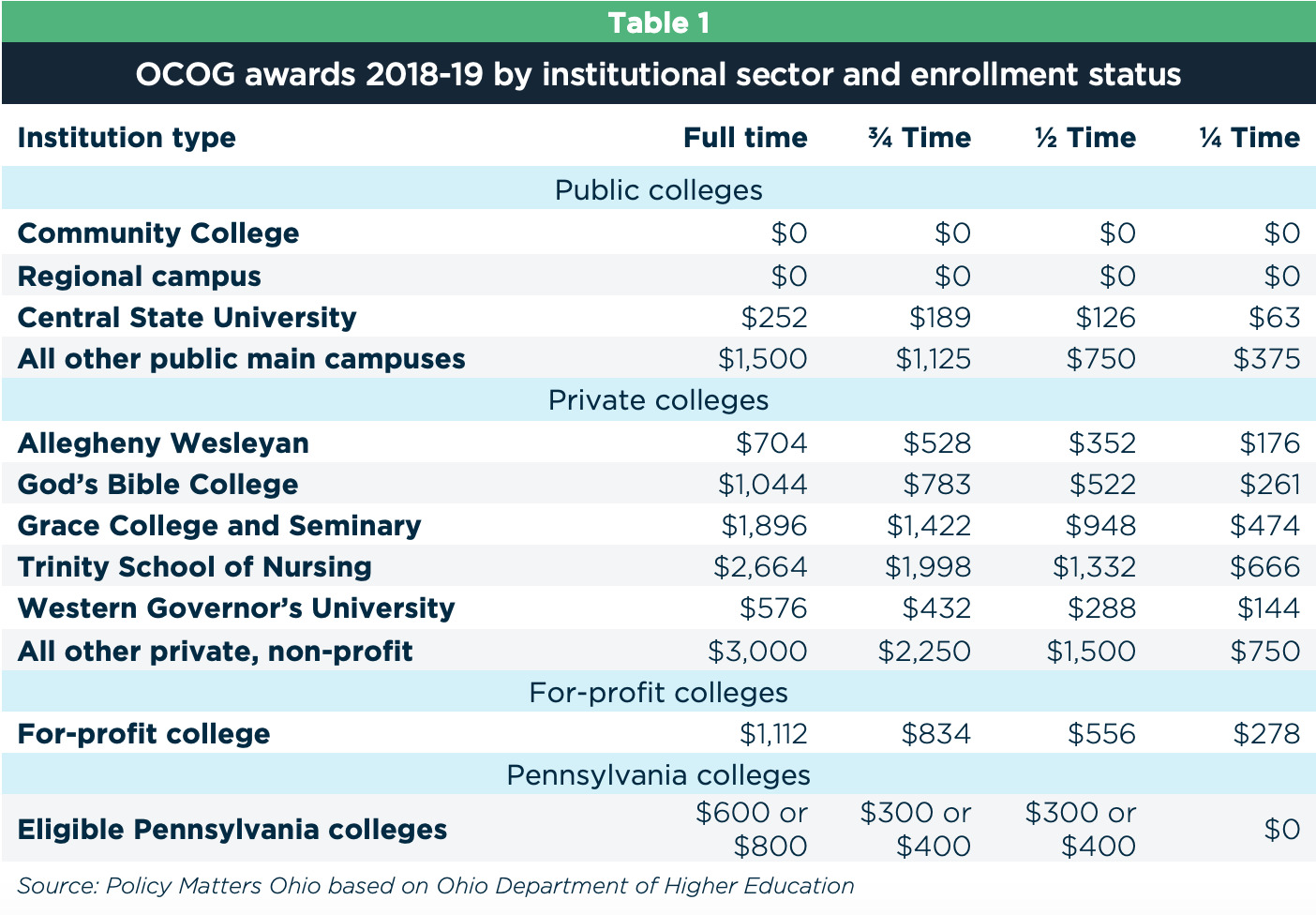 As shown in Table 1, community and regional campus students do not receive OCOG grants even if they qualify financially. Although Central State is a public university, the maximum grant available for Central students is only $252 - $1,248 less than all other public main campus university students. Because these institutions have lower tuition rates than other public institutions their students receive less OCOG. Ohio’s flawed OCOG policy creates this discrepancy.

OCOG is a “last-dollar” grant for tuition and general fees only. This means other aid, like Pell Grants, must be applied to tuition and fees before OCOG awards are determined. The state of Ohio defines cost of attendance as tuition and general fees only, but colleges and the federal government define costs of attendance as tuition, books, transportation, and basic living expenses such as housing, food, toiletries, and other education expenses.[6] Ohio policy should account for the actual cost of college attendance. OCOG awards are determined by a formula: (average tuition and general fees charged by an institutional sector) – (the Pell grant maximum for the academic year)[7] = fixed number, which is capped at the appropriate maximum award. Awards can vary by college.

While policymakers deny OCOG to community and regional campus students and shortchange Central State students, students attending notoriously poor performing and predatory for-profit schools receive maximum awards of $1,112.[8] Also, students attending private religious colleges have higher OCOG awards. For the 2017-18 academic year, there were almost as many OCOG recipients attending school in Pennsylvania as there were attending community college in Ohio, 324 and 374 respectively.[9]

In general, too many students attend institutions ineligible for full state need-based aid (see Table 3). Regardless of the intent of OCOG policy, the outcome is a greater share of black and Latino[10] students are excluded from full OCOG awards than white students. Of Ohio resident undergraduates, 60.7% of black students and 51.6% of Latino students attending public institutions are at colleges not eligible for OCOG or for significantly less OCOG compared to 47.8% of white students.[11] This is concerning because of college costs are a bigger burden on black and Latino families.[12] Past and present policies and lending practices keep African-American families from building wealth. Structural racism in employment leads to higher unemployment and lower median wages for people of color.[13] In Ohio, the median hourly wage for black workers is just $13.96 compared to $18.75 for white workers – this equates to more than $9,000 with full-time, year-round work.[14]

Students at Ohio’s only public HBCU receive significantly less OCOG than their peers at predominately white public universities. Central State has the lowest tuition of all 13 public main campus universities this is in part because the college receives a subsidy from the state to keep tuition costs down to ensure access for African-American students. Shawnee State University, which has the second lowest tuition, also receives a subsidy to increase access for students in Appalachia. Ninety-three percent of Central State students are black compared to only 8.4% at all other public university main campuses.[15] Central State educates a larger number black students than six of Ohio’s public main campus universities (see table 3). Of the six, five have a student population greater than six times Central State’s (see Table 3). Central State has a large percentage (78%) of students who use Pell Grants, the largest federal grant for low-income students.[16] Students at Central State would be especially helped if they could use OCOG to pay for books and essential living expenses. 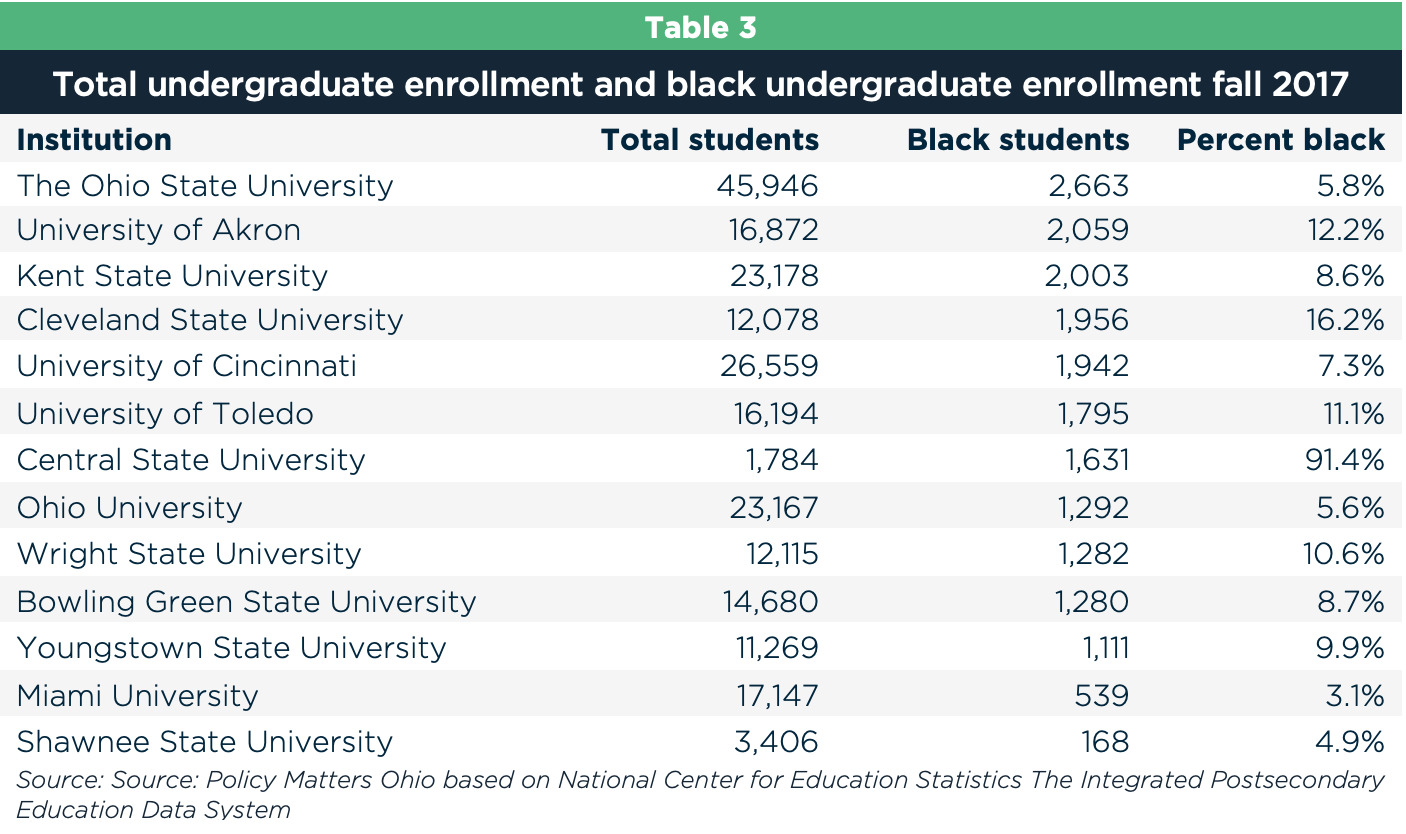 Many college students struggle to afford the basics

Beyond fixing the racial equity issues, policymakers can improve OCOG by including basics like housing, food, transportation and books in the total state cost of attendance. Needing to work long hours and the high cost of college are the top reasons student do not complete their degrees.[17] Better financial aid that covers essential expenses can help.

Colleges are responding to the dismaying reality of student hunger The majority of Ohio’s 61 public college have food pantries. Some also provide other necessities like hygiene products, winter clothes, and household necessities like toilet paper.[20] The establishment of pantries on campus is an indication that students need help with living expenses. Many Ohio college students balance a job on top of their academic demands (see Table 4).

Working more than 20 hours a week harms a student’s academic performance and reduces their chances of ever graduating.[21]

Deep investment in making college possible is part of what built the Ohio and American economy in the Twentieth Century. It is important that Ohio’s college aid system build on this legacy. The proposed $44.3 million increase over the biennium is a marked improvement but more is needed for OCOG to meet the needs of all Ohio students, whether attending a community college, historically black university or regional campus. Deep investment in OCOG and better policies can make the grant more effective. We recommend four changes to improve equity and make the program meet the needs of Ohio’s growing college population.

How to improve equity

Ohio built a world-class system of public colleges and universities, and created financial aid programs to help a previous generation attend. As college becomes increasingly essential to finding family-supporting employment and to our economy, it is essential that we help today’s young people afford college to build a better future for all of us.

[10] The Census category “Hispanic” refers to people with ancestral roots in Spanish-speaking countries. Latino refers to people with ancestral roots in Latin America, which can be slightly different (Spain is Spanish speaking but Spanish people are not Latino, Brazilians speak Portuguese but are Latino). Many activists now use Latinx because Latino refers to men and Latina refers to women while Latinx captures all gender identities. We use Latino here because it is more widely understood.

[20] Data collected from phone calls with public colleges and universities