One of the main ways that states provide opportunities to people and build a strong economy is by making education affordable to everyone. Ohio provides need-based aid to students pursuing postsecondary education through a program called the Ohio College Opportunity Grant (OCOG). This is essential to helping students from low-income backgrounds continue their education after high school.

State lawmakers passed a 2020-21 budget in July that increased OCOG funding over the previous biennium by $73 million, a 31% increase when inflation is considered (37% without considering inflation). This is a strong move in the right direction and a big shift from recent years when funding was stagnant or even falling. However, when funding levels over the past dozen years are adjusted for inflation, it’s clear that lawmakers are still severely underfunding need-based aid.

Figure 1 compares the new OCOG budget with those prior funding levels. Whether adjusted for inflation or not, the budget leaves need-based aid far below what is needed. In 2010, when the legislature replaced the Ohio Instructional Grant (OIG) and the OIG part-time grant with OCOG, the goal was to invest $250 million per year in aid. In fiscal years 2008-09, Ohio came close to the target by spending down the remaining OIG funds. With inflation, full funding of that 2010 goal today would be significantly higher than $250 million, yet OCOG funding is slated to go up to only $148 million in FY 2021.

The governor’s budget proposal included $3 million a year to OCOG for textbooks and instructional materials for students at community colleges and regional campuses. The House proposed moving this money into a separate fund. Providing aid for needs apart from tuition and general fees was an excellent (if modest) idea, but these proposals were left out of the final budget.

Nor does Ohio fare well in national comparisons, ranking 39th among states and among the lowest in the Midwest in need-based aid per-capita, according to the National Association of State Student Grant and Aid Programs. The Institute for Research on Higher Education ranks Ohio 45th in college affordability based on share of income required to pay for the net price of college (tuition, fees, and room and board minus financial aid).

OCOG is a last-dollar award, which means that other resources are factored in first, including federal Pell Grants and expected family contributions, according to the OCOG website.

As a result of this structure, OCOG is not available to many low-income Ohio students who would otherwise qualify, including more than 110,000 attending community colleges and regional campuses. Pell and expected family contribution totals exceed average tuition and general fees at these institutions, which means their students cannot receive OCOG. Exceptions have been made for former foster youth, veterans, and year-round students who have exhausted their Pell grants, but many other students also struggle to meet expenses and stay in school. 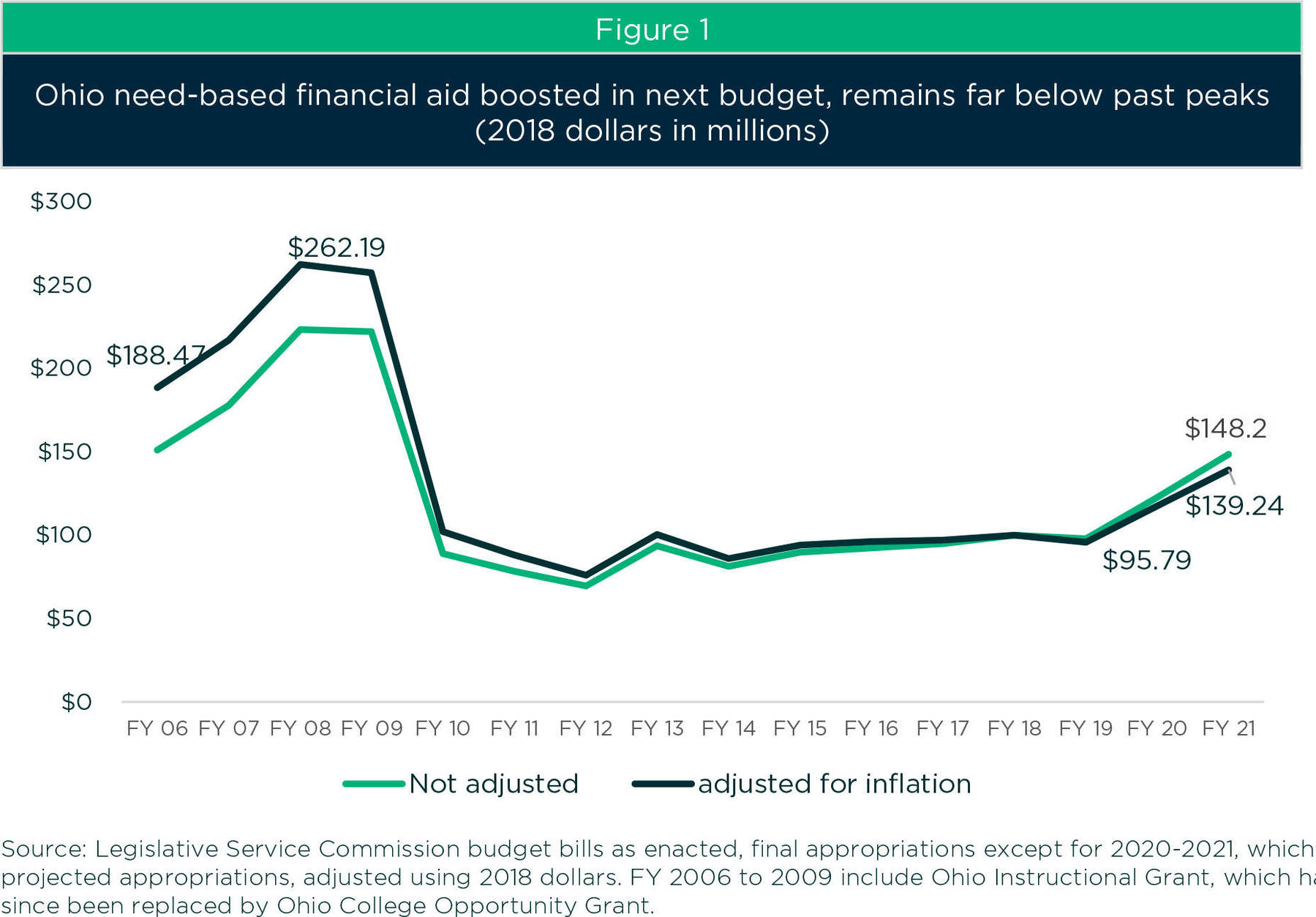 Because of their lower tuition and general fees, OCOG also excludes students at Central State University, Ohio’s only public historically black university (HBCU). The maximum grant available for continuing Central State students for the 2019-20 school year is $276 – significantly less than the $2,000 available to other public main campus university students. Students in Central State’s first tuition guarantee cohort are eligible for $532 from OCOG. The guarantee, which sets fixed rates for tuition and general fees for a cohort of students over a four-year period, was mandated by the state for all of Ohio’s public colleges and universities in this year’s budget.

To better serve low-income Ohio students, state policy should account for the actual cost of college attendance. Rather than defining the cost of attendance as tuition and general fees only, as Ohio does, colleges and the federal government include tuition, books, transportation, and basic living expenses such as housing, food, toiletries, and other education expenses.

While policymakers deny OCOG to Ohio students attending lower-cost schools, including community colleges and regional campuses, and restrict awards at Central State, students attending for-profit schools receive maximum awards of $1,300 – in fiscal year 2018, the state sent $3.4 million to for-profit colleges. In essence, this use of OCOG encourages students to attend for-profit institutions, even though many for-profits have poor outcomes and engage in predatory practices that leave students with nothing to show for their studies. Students attending private nonprofit colleges and religious schools are currently eligible for amounts ranging from $544 to $3,500.

Taken together, these exclusions mean low-income students and students of color are most likely to be left behind when it comes to receiving need-based aid in Ohio.

In our May 2019 report “Building better need-based aid in Ohio,” Policy Matters made a number of recommendations to address the disparities built into OCOG, including:

As college becomes increasingly essential to finding family-supporting employment, making sure young people can afford college will help all of us build a better future and stronger economy. Ohio’s world-class system of public colleges and universities won’t meet its potential unless policymakers shift course and update our state’s financial aid system to meet today’s challenges.

We are grateful to the Joyce Foundation for funding that allowed this research.