People who complete college or community college earn higher incomes, often much higher, than those with only a high school degree on average. They also have much lower rates of unemployment and are less likely to be in poverty.

That’s why Ohio’s Department of Higher Education set a goal that by 2025, 65% of Ohioans aged 25 to 64 will have a degree, certificate, or other postsecondary credential of value. In 2016, only 44.1% of Ohioans had hit this mark.

But Ohio policymakers aren’t providing the funding higher education needs to reach that ambitious goal – instead, legislators continue to shortchange our state’s public colleges and universities and our economic future.

This disconnect between goals and policy shows up clearly in funding since 2006 for the State Share of Instruction (SSI), the state’s main financial support for public higher education, including Ohio’s 14 public universities, 24 branch campuses and 23 community colleges.

SSI funding for 2020 and 2021, adjusted for inflation, is lower than it was in the most recent 2018-19 budget and lower than it was in the 2006 pre-recession baseline. It’s also far below its 2009 peak. SSI is directly tied to the cost of tuition, which means tuition rises when funding drops. By failing to ensure funding keeps pace with inflation, lawmakers are asking public higher education to do more with less. 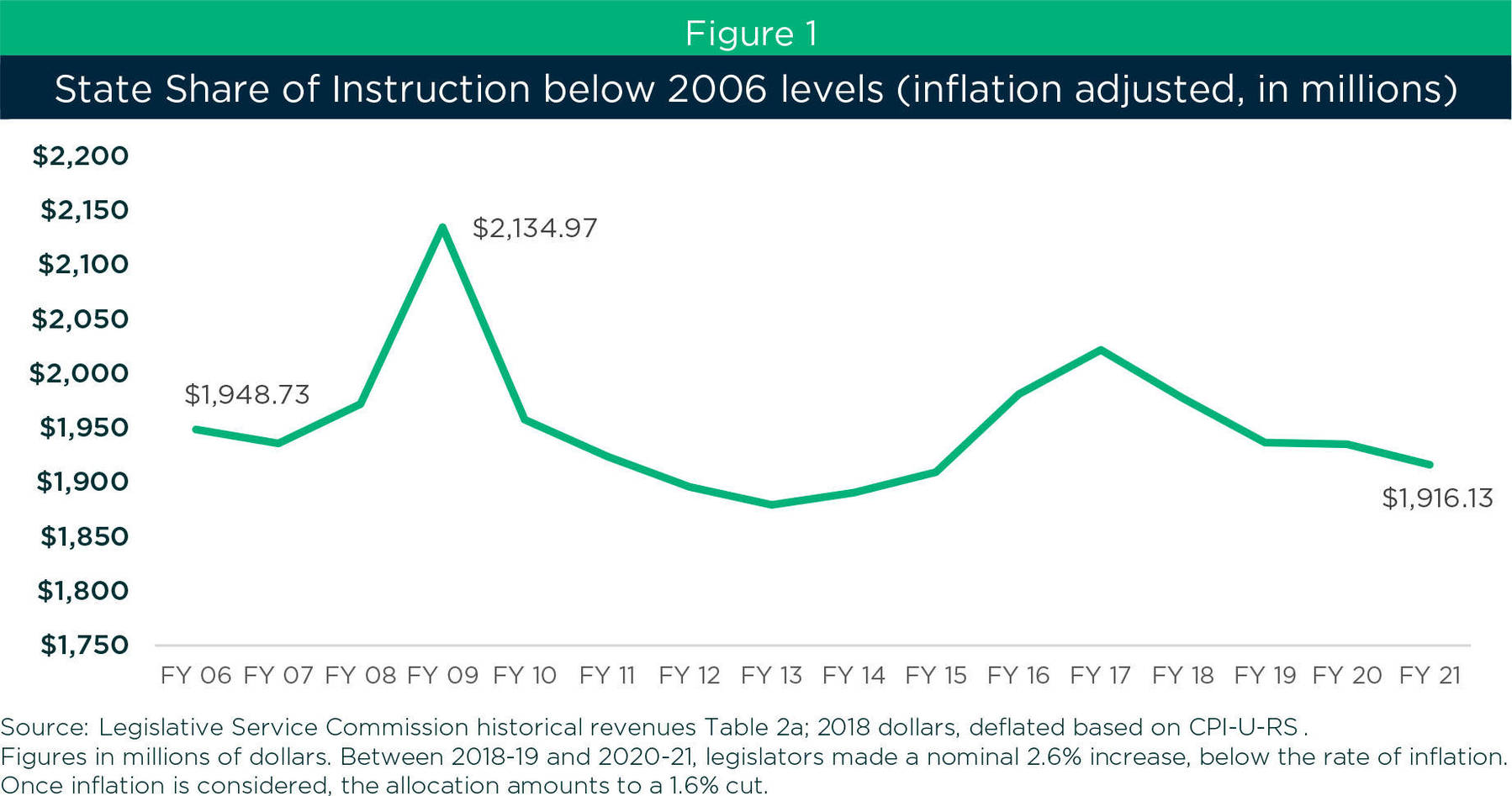 than 2% for academic years 2019-20 and 2020-21, and limits community and technical colleges to increases of no more than $5 per credit hour over the previous academic year.

For the first time, the state also requires public universities to establish tuition guarantee programs, which set fixed rates for tuition and general fees for a cohort of students over a four-year period. Previous state policy, passed into law in 2013, had permitted such guarantees without making them mandatory. Eleven of Ohio’s 13 public universities already had undergraduate tuition guarantees, and the remaining two, Central State University and the University of Cincinnati, pledged to do so after Gov. Mike DeWine announced that the guarantee would be in his budget proposal.

These requirements may help keep costs lower for students but don’t address why costs are so high in the first place: reduced state funding. Restrictions on fee increases and tuition guarantees coupled with reduced funding means public colleges and universities must struggle to do more with less.

And even though Ohio has made commitments to keep higher education costs lower for students, our state doesn’t fare well in national comparisons. For fiscal year 2019, Ohio students paid an average tuition of $9,801 at Ohio’s main campuses, $5,951 at branch campuses and $4,497 at community colleges, all of which were higher than the national average.

college affordability. The Institute for Research on Higher Education found on average the

Ohio’s insufficient support for higher education does not align with the state’s goal that 65% of Ohioans attain a degree, certificate, or other postsecondary workforce credential of value. High tuition deters students from pursuing degrees or credentials and makes it extremely difficult for Ohio students, especially low-income students, to complete their degrees.

Getting a post-secondary degree is not only good for individual students. In the long run, people with more education help revitalize our communities and strengthen the state economy. Ohio’s budget should reflect this reality and make public colleges and universities a priority.

We are grateful to the Joyce Foundation for funding that allowed this research.