Good afternoon, Chair Richardson, ranking member Troy and members of the committee. I am Wendy Patton, a senior project director of Policy Matters Ohio, a non-partisan, not-for-profit research organization with a mission of creating a more prosperous, inclusive, equitable and sustainable Ohio. Thank you for the opportunity to testify in support of the Fair School Funding Plan of House Bill 1.

Every student, no matter where they live or what they look like, deserves a great public school to prepare them for a bright future. It is the responsibility of the state to ensure that. But Ohio’s schools are forced to rely too heavily on local resources, which have been gutted in many districts by economic change and short-sighted state policy. Schools struggle in places where factories closed, people moved out and property values fell: they don’t have enough teachers, lack computers and access to broadband, and may not offer art, gym, or extra-curricular activities (or parents have to pay to play). Because of structural racism and long-standing discrimination in housing, employment, health care and many other policies, many Black and brown Ohioans live in communities where local resources are low and schools are underfunded. It’s time to fix this inequity.

Poverty affects students’ ability to learn. When the Ohio Supreme Court first ruled the state’s school funding system was so unfair it was unconstitutional -- back in 1997 -- lawmakers began to boost funding to schools where many students were experiencing poverty. Unfortunately, state aid did not keep up with need. 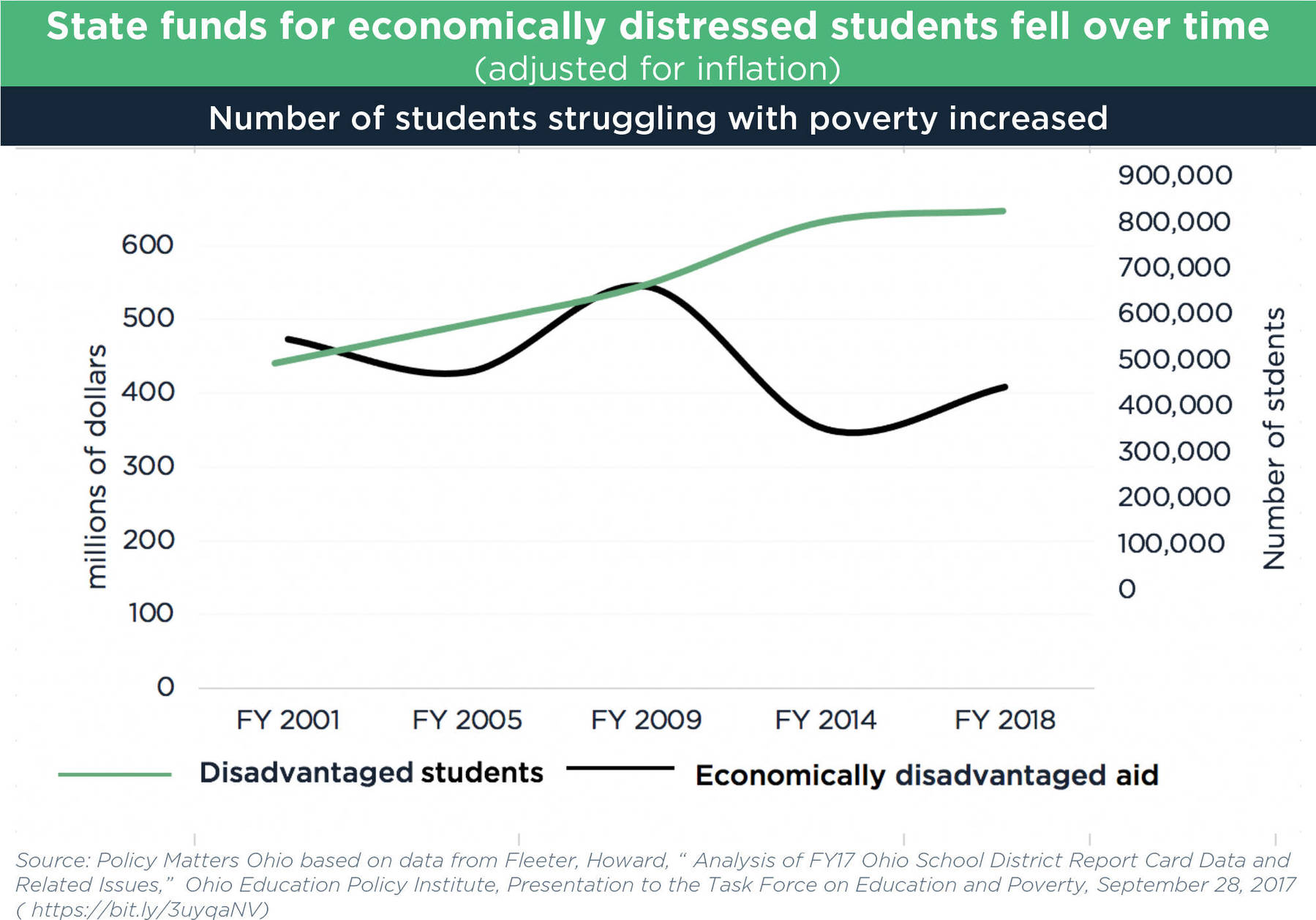 Today the state doesn’t even base school funding on the cost of educating a student. As a result, funding is inadequate. School funding overall is lower than the national average , and the national average itself is mediocre. The “Fair School Funding Plan” is a needed step forward. District-level spreadsheets on the impact of House Bill 305, which proposed the Fair School Funding Plan and was passed last fall by the House, showed it would boost average state per-pupil aid from $6,835 to $8,459. The greatest increase goes to districts where poverty is high and the cost of educating students is the greatest. 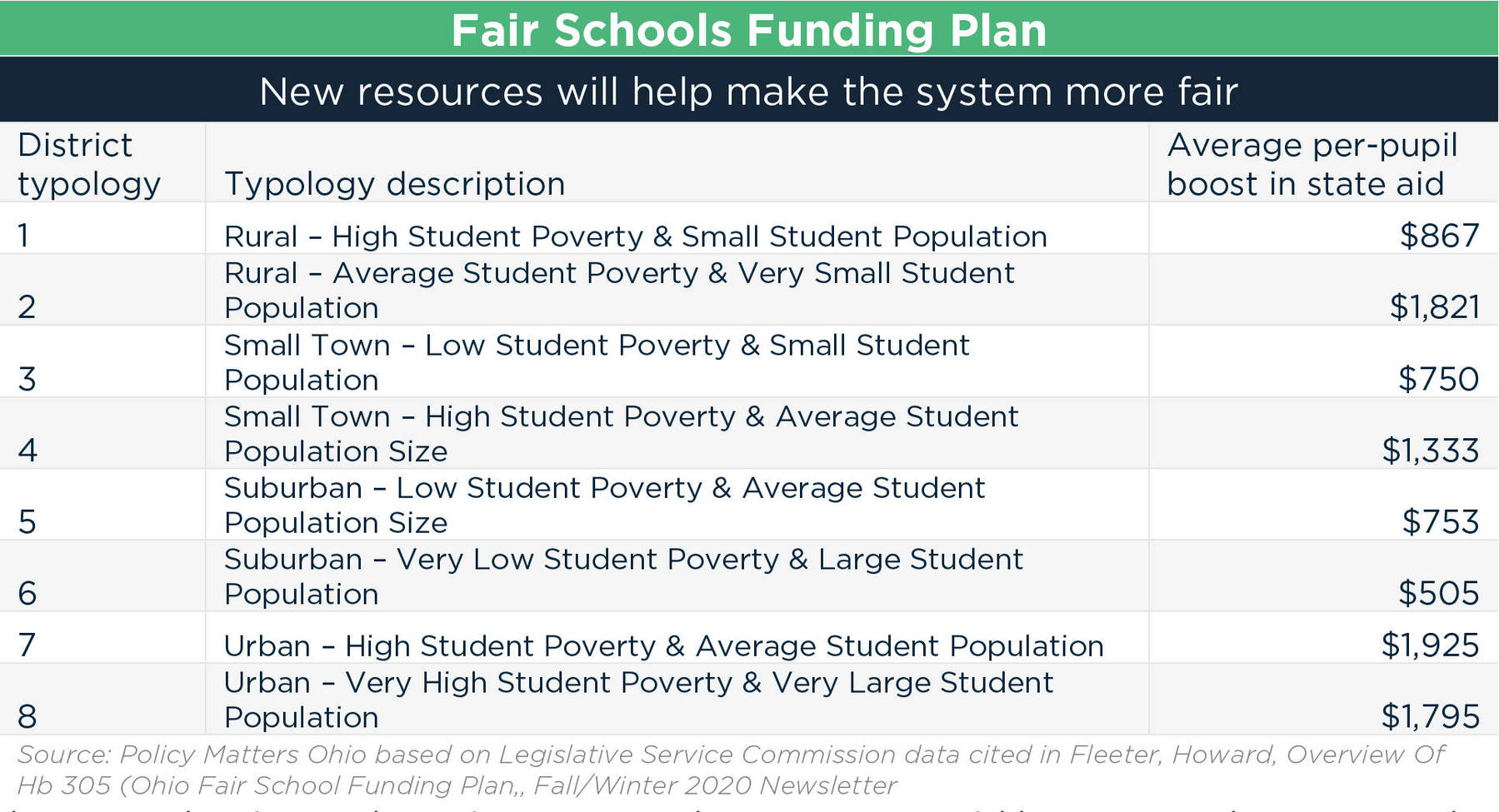 The Fair Schools Funding Plan proposed in HB 305 would have started to correct the structural racial discrimination in Ohio’s school funding policy. Schools that many Black and brown students attend would have received an average boost in per-pupil funding that can start to build a better future for those students (See figure below). 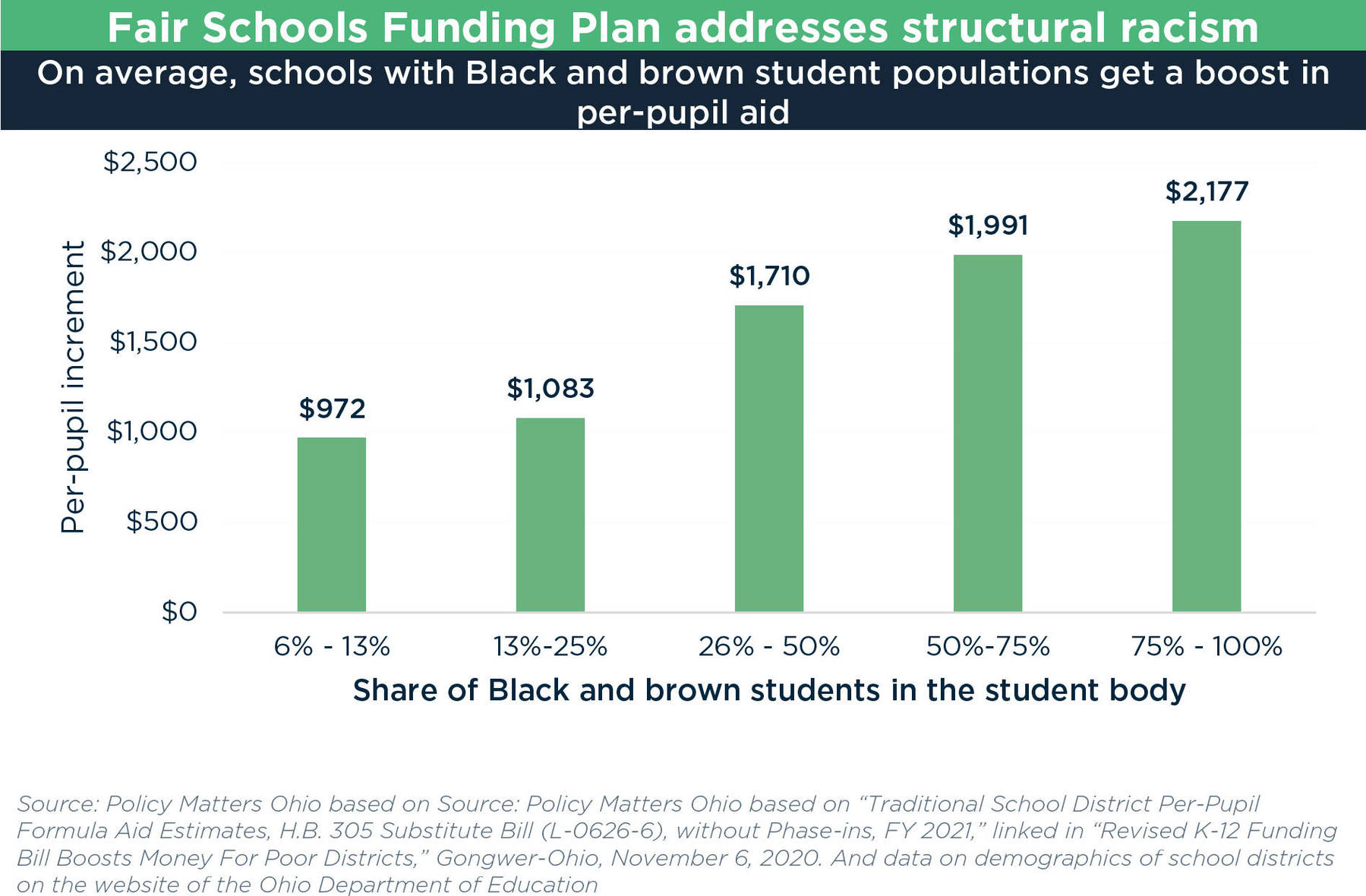 We urge you to enact the Fair Schools Funding Plan and fund it in the budget bill. It can be financed by cutting unproductive, special interest tax loopholes, restoring tax rates on the wealthiest people and corporations that have gotten major tax cuts over the past two decades. Today, Ohio’s schools face the daunting task of getting students caught up after a year of on-line instruction. Nowhere will catch-up be harder than in under resourced communities where many families lacked access to or could not afford broadband access and computers. Enacting and funding the Fair Schools Funding Plan is among the most important steps lawmakers can make to build a better, more resilient post-pandemic future for Ohioans.

A good move for Ohio's schools, and how to make it even better
December 01, 2020

A good move for Ohio's schools, and how to make it even better
December 01, 2020