The link between education and self-sufficiency

The link between education and self-sufficiency

Thank you for this opportunity to respond to a question by Representative Ramos on the linkage between education and self-sufficiency (or lack thereof).

Policy Matters Ohio publishes The State of Working Ohio every year, on Labor Day. This chart shows that the lower the level of educational attainment, the lower the hourly wage. This speaks to Representative Ramos’s observation that education – or the lack thereof – is related to state expenditures on public assistance. 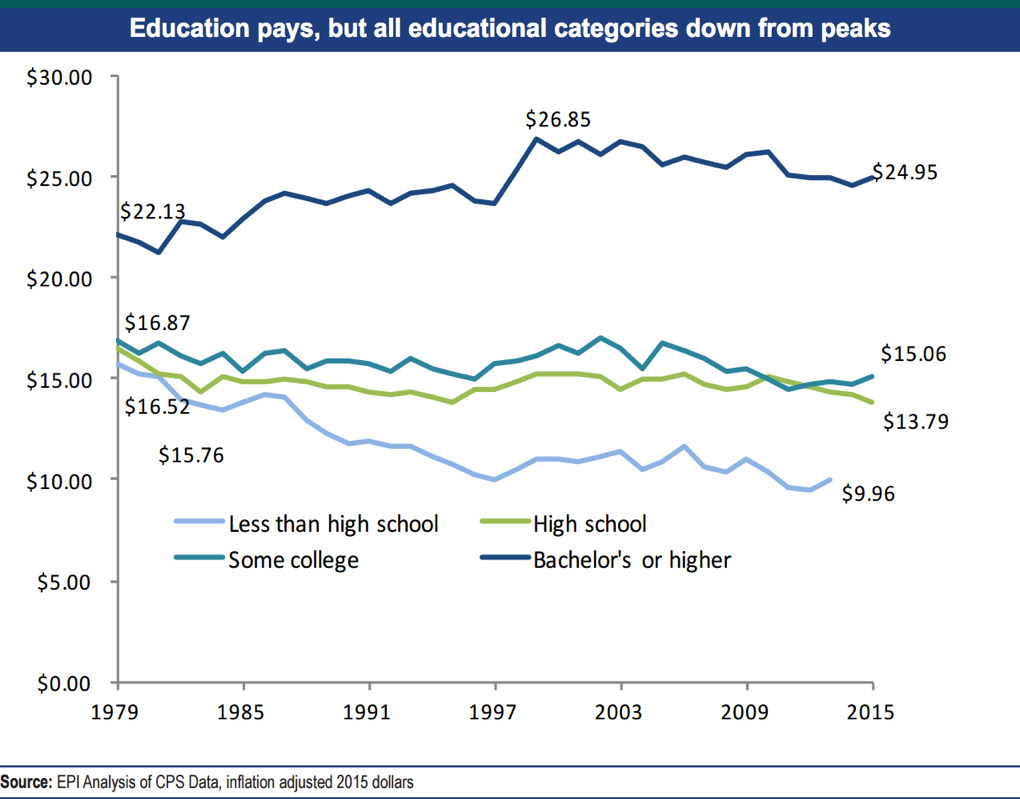 One of the best studies on this matter was published by the Economic Policy Institute in 2013. The study, entitled “A well-educated workforce is the key to state prosperity,” by Noah Berger and Peter Fisher, asked: “What can state governments do to boost the economic well-being of their people? That is the central question of state economic policy.”

Their answer: Incomes and wages can increase across an economy when productivity—production per capita—increases. States have many tools in their arsenal to increase productivity, including investments in public infrastructure, in technological innovation at public universities and other institutions, and in workers through the education and training systems.

But many states have been retreating from their responsibility to ensure state economic growth that benefits all residents in favor of a short-sighted approach to economic development. In these states, the focus is on luring employers from other states with strategies that do not lead to rising incomes because they do not make the workforce more productive. Even worse, the focus drains resources from the most important, proven, path to increasing productivity: investments in education.

Major findings of this report include:

Another study on this was “Population Health: Behavioral and Social Science Insights - Understanding the Relationship Between Education and Health,” Emily B. Zimmerman, Steven H. Woolf, and Amber Haley. The study included a review of literature on the topic, which included the following findings:

The Justice Policy Institute highlighted the links between public safety and educational attainment.

Policy Matters Ohio testified before the Ohio General Assembly in 2015 about how the state’s low-wage economy leaves many working Ohioans below the level of self-sufficiency. We highlighted that most of our largest occupational categories, like retail, fast food, home health and day labor, pay too little for workers with children to make ends meet. We know from compiling “The State of Working Ohio” year after year that one of the most important investments a state makes is in affordable, high-quality education from pre-school through graduate school.