Oklahoma has one of the highest incarceration rates in the nation. The public and elected officials have recently embraced a set of reforms to reduce the state’s prison population. In 2016, Oklahomans overwhelming voted in favor of State Questions 780 and 781. SQ 780 reclassified simple drug possession and many low-level property crimes as misdemeanors rather than felonies, and SQ 781 directed the state government to calculate the savings of those measures through lower incarceration and distribute that money to counties to fund mental health, substance abuse, and other rehabilitative services. Meanwhile, Oklahoma legislators passed a reform that encouraged district attorneys to file more nonviolent felonies as misdemeanors and another that raised the threshold for charging property crime as a felony. A little more than a year after SQ 780 and 781 took effect, Oklahomans are already seeing positive changes. Felony filings are down nearly 29 percent. Petty larceny rates have dropped. Misdemeanors have risen by 14 percent while the overall crime rate has dropped slightly.

This year, Ohioans will vote on Issue 1, which does not reclassify minor property crimes, but takes similar steps with minor drug possession charges. Ohio Issue 1 will reclassify non-violent drug possession as a misdemeanor and assign those Ohioans to treatment or other community-based approaches. It prevents re-imprisonment of formerly incarcerated community members when their only new infraction is a probation violation that is not itself a crime. It rewards rehabilitation by allowing those in prison to earn credits that reduce sentence terms if they take part in education, behavioral, and treatment programs. Finally, it redirects savings from reduced incarceration to treatment, safety and victim recovery programs for Ohioans of all ages, which should improve safety and reduce addiction.

Before passing SQ 780 and 781, Oklahoma had some of the nation’s harshest sentences for minor drug crimes. For years, severe mandatory minimums[1] and tough-on-crime attitudes[2] contributed to simple drug possession being the most common charge[3] for state prison admissions. By the end of 2016, Oklahoma had passed Louisiana for the highest incarceration rate in the United States, at 1,310 people incarcerated per 100,000 residents. Ohio ranked 15th in incarceration rate at 444 per 100,000 residents in 2016.[4]

While it will be years before the full effect of SQ 780 and SQ 781 filters through to Oklahoma’s prison system, the early indicators are very encouraging. Simple drug possession and low-level property crimes were two of the most common charges filed in Oklahoma district courts. After SQ 780 took effect in July 2017 and drug possession was reclassified as a misdemeanor, felony filings dropped dramatically and stayed low the rest of the year. Between July 2017 and June 2018, the first year of SQ 780, felony filings fell nearly 29 percent.

In the years leading up Oklahoma’s recent reforms, there had been a clear trend towards more felonies being filed each year, accompanied by a steady decline in misdemeanor filings, according to the Oklahoma Supreme Court’s annual reports,[5] which are the state’s only official source of court data. This could have been caused by a few different things. If more serious crimes were being committed each year, District Attorneys may have been devoting more resources to prosecuting felony cases and fewer to less serious crimes, resulting in more felonies being filed while they declined to prosecute cases that would otherwise be filed as misdemeanors. With DAs being forced to operate on increasingly tight budgets, it’s likely this was at least part of the story.

However, it’s also possible that DA’s had roughly the same types of cases referred to them by law enforcement, and before SQ 780 and 781 passed, prosecutors chose to file more the serious charges. It’s difficult to know for sure, but shifting attitudes or guidelines used by prosecutors likely contributed to the consistent uptick in felony filings.

However, the jump in misdemeanor charges happened at the beginning of 2017, before the law took effect, which suggests that something other than SQ 780 contributed to this change. That’s where the Oklahoma Legislature also deserves some credit for taking action on justice reform. During the 2016 session, they passed several justice reform bills[6], including HB 2751, which raised the felony property crime[7] threshold from $500 to $1,000, and HB 2472, which codified the ability of DAs to file many nonviolent felonies as misdemeanors. Those reforms took effect November 1, 2016. 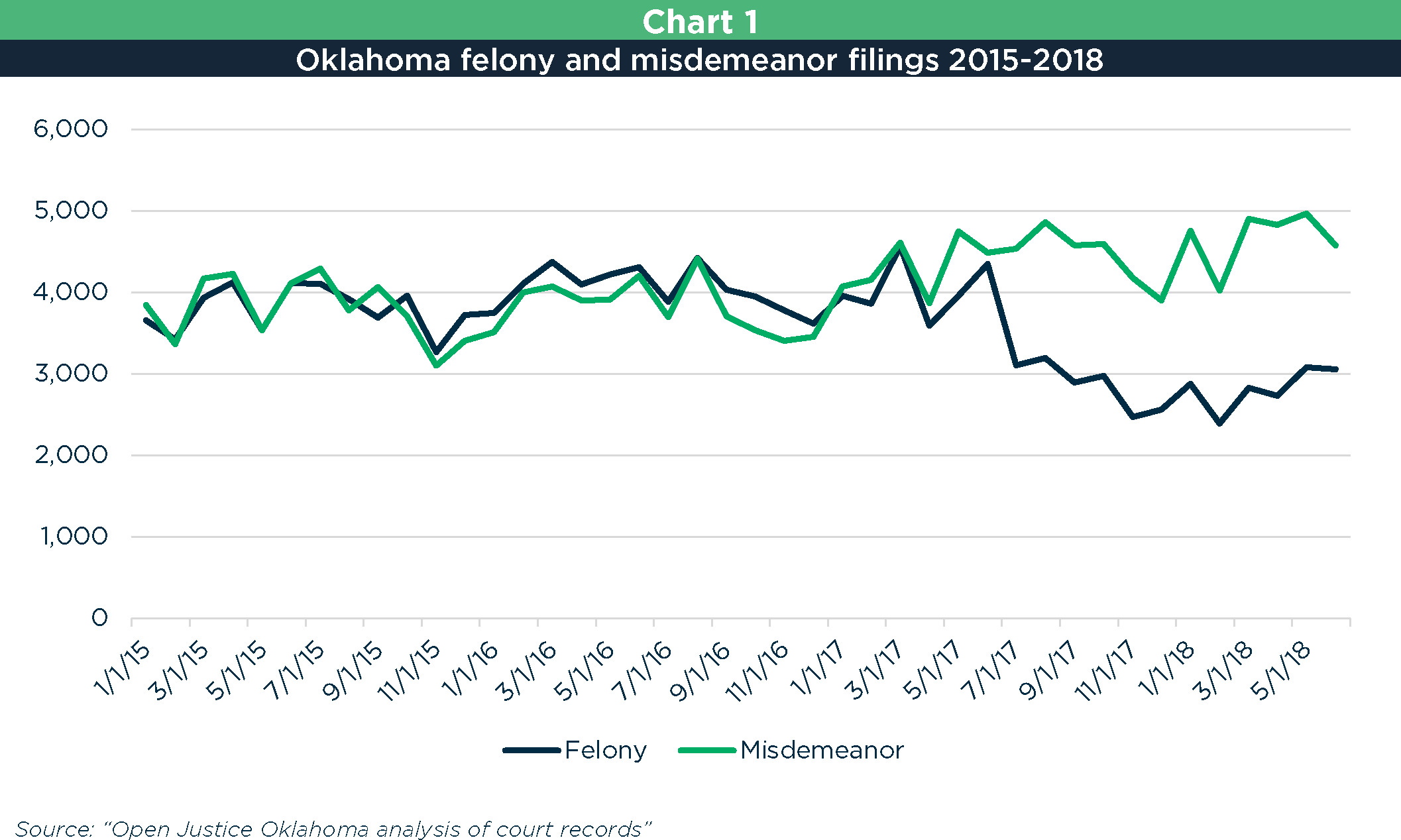 The effects of both SQ 780 and the 2016 legislative reforms are clear. In January 2017, two months after the 2016 legislative reforms kicked in, misdemeanor filings rose sharply. In July 2017, felonies dropped sharply as SQ 780 took effect. This is very important, because a felony conviction is much more damaging to a person’s work and life prospects than a misdemeanor conviction. As more people end up with misdemeanors rather than felonies, they’re more likely to get their lives back on track and stay out of the justice system instead of entering a state of perpetual punishment.[8]

Other components of Ohio’s Issue 1 mirror reforms Oklahoma passed during the 2018 legislative session. This includes provisions that prevent re-incarceration of people when their only new infraction is a noncriminal probation violation. While it is too early to tell the effects these will have on Oklahoma’s prison population, other states have shown great results from similar measures. Texas, for example, implemented short-term sanctions for probation violations in 2007 as it kicked off a decade of reform efforts; the state reduced its prison population enough to close four prisons and plans to close four more.[10] North Carolina reduced prison admissions for probation violations by one-third.[11] A substantial portion of prison admissions in Oklahoma, like in many other states, are people who were initially sentenced to some type of community supervision, but violate the terms of their supervision by failing to pay their excessive court and supervision costs, failing a drug test, or missing meetings with a probation officer. Oklahoma’s courts and District Attorney’s offices are funded substantially by criminal fines and fees, and many – though we don’t know how many – end up in prison for their failure to keep up with the hundreds of dollars they are ordered to pay each month.

Debates about SQ 780, both before and after the vote, have often centered on how reducing punishments affects crime rates. The results are encouraging on this front, as well. Following the example of many other states, SQ 780 increased the felony theft threshold from $500 to $1,000, meaning that stealing property worth less than $1,000 is now a misdemeanor. Recently released crime statistics show that reports of larceny – the most common property crime covered by SQ 780 – continued to fall after the reform went into effect. It is clear that the passage of SQ 780 and 781 did not cause Oklahoma to be overrun by crime. Total crime fell by nearly 4 percent between 2016 and 2017. Nonviolent crime dropped by more than 3 percent.[12]

Like Issue 1, part of the case for SQ 780 and 781 was the inevitable cost savings from reducing the prison population. OK Policy estimates that SQ 780 – the felony reclassification amendment - would save tens of millions over first six years. [13] If the reclassification in SQ 780 applied retroactively, like it would under Ohio issue 1, Oklahoma would enjoy immediate cost savings. Policy Matters Ohio estimates that Ohio will save $136 million a year as soon as Issue 1 goes into effect. Retroactivity makes the Ohio iniative even more beneficial.

Ohio can learn from Oklahoma’s smart criminal justice reforms and if Issue 1 passes, Oklahoma can learn from Ohio. Unlike SQ 780, Issue 1 is retroactive and will therefore multiply the effects of its changes. People convicted of the low-level crimes targeted by SQ 780 and Issue 1 are often sentenced first to probation, then end up in prison due to a revocation. By allowing people who have already been sentenced to be resentenced or released, Issue 1 will likely avert prison admissions for thousands of people on supervision and shorten the stays of those already incarcerated. Because SQ 780 was not retroactive, over 1,400 people were admitted to Oklahoma prisons in FY 2018 solely for crimes that are now misdemeanors.

From Oklahoma to Ohio, the tide is turning on the “tough on crime” approach to criminal justice. Increasingly, politicians on both sides of the aisle are recognizing that incarceration is often not the best way to hold people accountable and seek justice. The same year 65 percent Oklahomans voted for President Trump, 58 percent of voters supported SQ 780 and 56 percent voted for SQ 781. Since then, with felony filings and minor larceny crimes falling, the Sooner state has showed that another way is possible. Ohio should follow Oklahoma’s lead.