Ohio underinvests in need-based aid by $150 million a year

Ohio has one state source for need-based financial aid — the Ohio College Opportunity Grant (OCOG). Lawmakers smartly increased OCOG funding, both in the last budget and in this one. In total, the Governor’s proposal increases need-based aid by $12.7 million (6.7 percent) over the next two years. By 2019, Ohio will spend $102 million on need-based aid.

In 2010, Ohio replaced the Ohio Instructional Grant (OIG) and the OIG part-time grant with OCOG. Policy makers originally intended to invest $250 million per year in the program. In 2008-09 we came close when remaining OIG funds were spent, but since the recession cuts, we’ve never neared the original goal. Kasich’s proposal falls about $150 million short, per year. 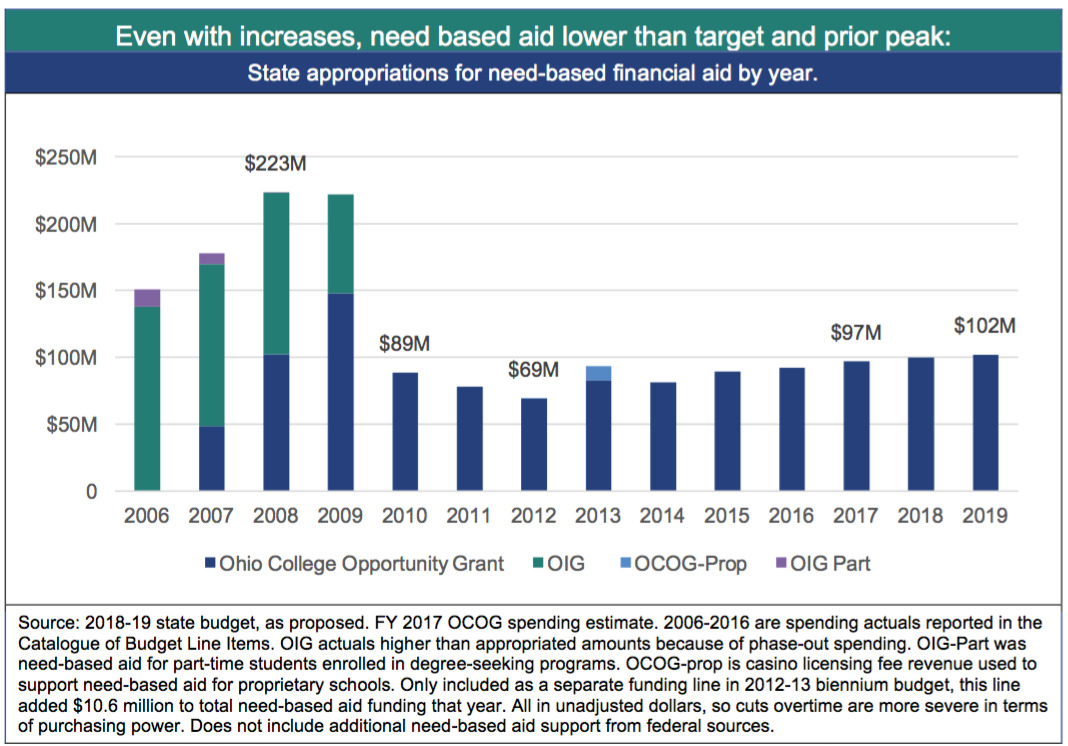 Too many locked out, too much debt

Not only does underinvest in financial aid, it’s poorly targeted. Students at two-year public institutions, community colleges and branch campuses, are denied full OCOG eligibility. Foster youth at two-year public schools qualify for some OCOG support, and, under certain conditions, students enrolled year-round at these institutions can access OCOG aid for summer tuition and fees. The Governor, rightly, proposes opening OCOG to veterans enrolled in community college or branch campus institutions. This incremental re-opening of need-based aid for these students will help, but so much more is needed.

Ohio drastically cut support for higher education to balance the state budget during the recession. Over the recovery period, the state prioritized tax cuts over reinvestment in essentials. While tax cuts haven’t created the jobs policy makers promised, sluggish funding of higher education has taken a toll. Ohio ranks 45 of 50 states in college affordability. Since 2010, Ohio’s overall enrollment in public institutions dropped by 15.3 percent -- more than any other state’s.

Since lawmakers ended eligibility for state need-based financial aid to students at community colleges and branch campuses, fewer adult learners have enrolled. As Ohio emerged from the recession in 2010, about 130,000 Ohio adults upgraded their skills at these institutions. That dropped by 35 percent to less than 85,000 in 2015. Increasing numbers of community college and branch campus students cannot afford to attend without loans. Over half of first-time community college students took out loans by 2013, up 12 percentage points from 2009.

The 2016 OCOG spending at two-year public institutions increased by about $981,000 due to expanding the program to about 3,130 students taking year-round schedules. In 2015 only 65 students at public two-year institutions received help. Enrollment typically dips as the economy picks up but Ohio’s losses are significant. Ohio aims for 65 percent of adults to attain a degree or post-secondary credential by 2025. It won’t be met unless more people can afford higher education.

Ohio is facing an affordability crisis. Our 2-year programs are some of the most expensive in the nation. Community colleges offer training programs connected to careers and are often the most accessible institutions for low-income and non-traditional learners. Ohio has ostensibly prioritized workforce development, but that isn’t evident in our financial aid investment. Full access to need-based aid should be an urgent priority and fully funding OCOG is a key step to full institutional access. 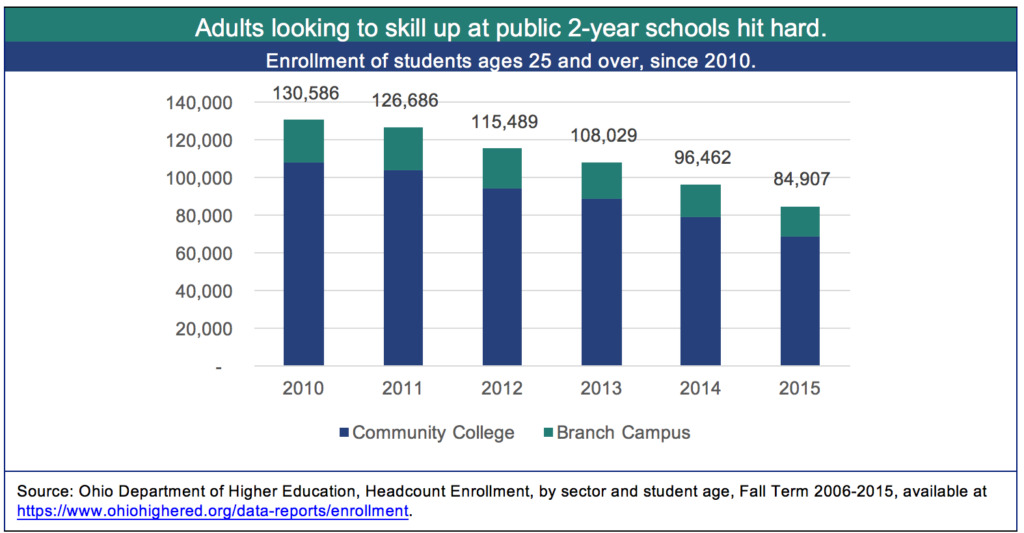 Ohio can fix this problem. Closing the “passthrough” tax break on business income would make $580 million available to support essentials like need-based aid, easily enough to fill the $150 million OCOG gap. A $1 million investment in OCOG helped more than 3,000 students skill up at our two-year schools. Increasing this investment ten-fold to $10 million could help thousands of students and adult learners at a cost that less than 2 percent of the passthrough tax break. The budget should prioritize access to education and create a solid foundation of financial aid for our workforce development programs at community colleges. We have the money; we only need the will.

Policy Matters Ohio is a member of the Working Poor Families Project, a national initiative that advances state policies in the areas of education and skills training for adults, economic development, and income and work supports. WPFP supported this research.

Ohio underinvests in need-based aid by $150 million a year