The state hasn’t answered questions about funding from federal sources

State dollars for early care and education may – or may not – keep pace with inflation in Governor John Kasich’s 2018-2019 budget proposal. Evaluating state investment in these programs has been challenging due to unanswered requests from the Ohio Department of Jobs and Family Services. The agency has not disclosed levels of funding for public childcare from federal welfare program, Temporary Assistance to Needy Families (TANF), in the current 2016 and 2017 budget or for the governor’s proposed budget for 2018 and 2019.

It has not always been like this. In 2009, Ohio accepted parents earning up to 200 percent of poverty into the public childcare program: A parent with two kids earning over $36,620 could get help with the high cost of childcare. Today, only families making no more than 130 percent of poverty – lower than the ceiling for eligibility in Medicaid – initially qualify for childcare assistance in Ohio.

High-quality childcare and pre-school can help a child learn to read. In Ohio, about half of all young children from families making more than 200 percent of poverty are enrolled in preschool. But the rate among children from low-income families is much lower. Nationally, 29 percent of 4-year-olds and 5 percent of 3-year-olds from low-income families are in pre-school. In Ohio, just 5 percent of low-income 4-year-olds are in pre-school, and 2 percent of 3-year-olds. Payment for public preschool is low here: $4,000 per child, compared to a national average of $4,521. Reimbursement rates to childcare providers are also extremely low. The state pays less than half of the level recommended by the federal government for infant care and just over one-third of the recommended rate for a 4-year-old.

The state should step up

In the 2018-2019 budget, state dollars may increase enough to cover inflation on a biennial basis, but with little left over. The Job and Family Service line item for “Early Care and Education” (600535), the largest General Revenue Fund (GRF) line item for early care, is flat funded. The “Early Childhood Education” (200408) GRF line item increases in the two-year budget proposal compared to the current biennium, but the increase highlights a failure to make use of all appropriated funds in 2016. The Job & Family Service Agency line item early education (600696) is a dedicated purpose fund to incentivize pre-school programs administered by the Ohio Department of Education to improve the quality of care and education. In this program, too, the percentage increase in the proposed budget over the current one reflects a failure of the agency to spend appropriated dollars in 2016. We do not yet know if full funding for 2017 will be utilized.

An ongoing trend of underutilization of funds in early care and education would be a cause for deep concern. 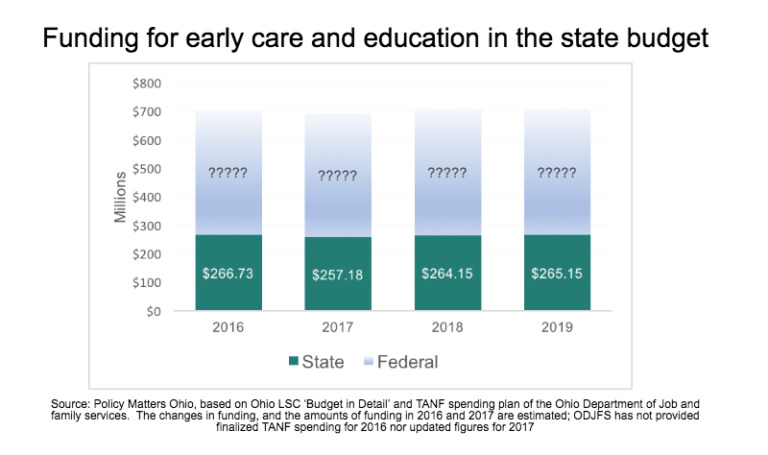 Whether the state is putting more TANF money into childcare this year or less, deep cuts proposed in President Trump’s proposed budget for Health and Human highlight an uncertain future for federal funding for all health and human services. Investment in public childcare and early education in Ohio will remain below the need and below average unless state lawmakers increase state funding for it from sustainable sources for now and in the future.

The state hasn’t answered questions about funding from federal sources