One in six Ohioans face food insecurity, which means they lack regular access to nutritional and safe food — or even food at all. Governor John Kasich's proposed budget included no increased investment for hunger programs or food banks. Funding to keep Ohio’s hungry families fed should be a priority. For most of the past decade and a half, poverty and indicators of hunger were rising in Ohio, with recent small improvements. Inflation-adjusted income fell steeply and has not yet fully recovered. Ohio citizens still struggle with hunger. 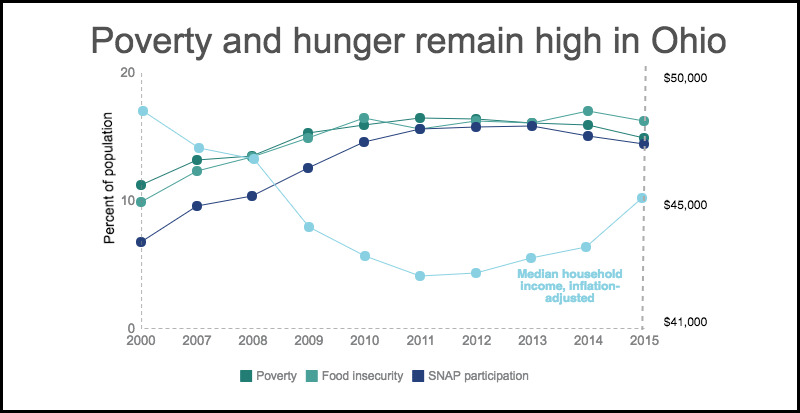 Source: Policy Matters Ohio, based on Ohio Association of Foodbanks at http://admin.ohiofoodbanks.org/uploads/news/formatted-hunger-index-summary-2015.pdf

The state’s investments in feeding the hungry have high returns More to the point, state aid provides 46 million meals a year.

People who struggled to afford food over the past year are considered to live with food hardship. Too many people in Ohio’s big cities fall into this category. According to the Ohio Association of Foodbanks, all Ohio’s large metro areas — including Youngstown-Warren-Boardman, Dayton, Toledo, Cincinnati, Cleveland-Elyria, Columbus, and Akron — had higher than average food hardship rates. Kasich has a track record of reducing food aid to the cities and didn’t take advantage of federal rules that would broaden access to SNAP food aid in Ohio’s urban areas. For this reason, Legal Aid has filed a civil rights complaintfor discrimination against the administration.

The 2018-2019 Kasich budget flat-funds food aid. Rising prices due to inflation actually erode the number of meals the budget can provide. Yet the governor’s budget finds room for tax breaks that benefit the wealthiest Ohioans: it provides income-tax cuts averaging more than $2,000 a year for Ohioans making more than $457,000 annually, the top 1 percent.

The state invests about $20 million a year in food aid, but it’s not meeting the need. The Ohio Association of Foodbanks has documented rising hunger in Ohio, and calls for an additional $10 million a year for hunger relief programs over the next two years. 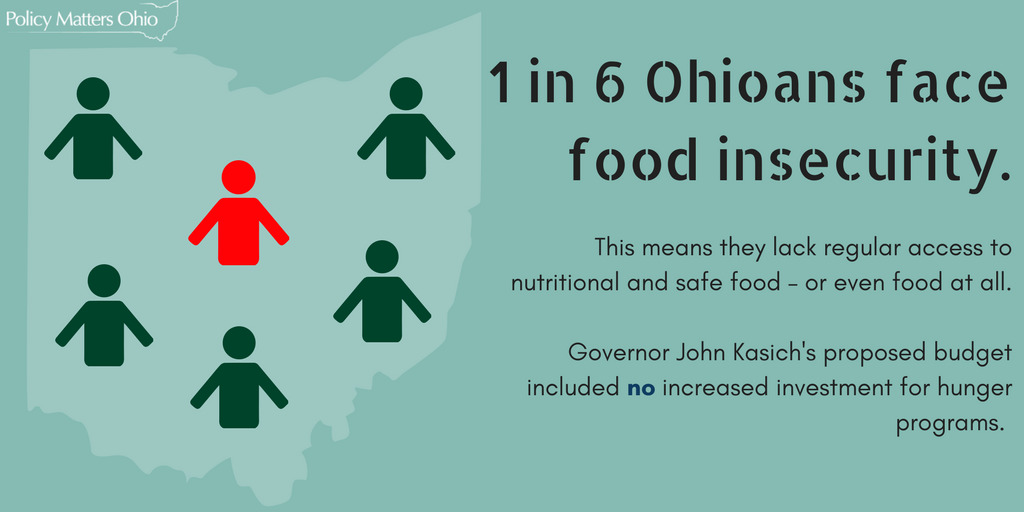