Ohio is a densely populated state with diverse regions in terms of economy, geography, and demographics. Local governments provide many of the services that support our daily lives: emergency response, water and sewer, flood control, libraries, parks, public health, child welfare, senior services and many others. Between 2006 and 2018, local governments lost $1.4 billion a year, adjusted for inflation, through cuts in state aid and loss of local tax revenues reduced or eliminated by the state. 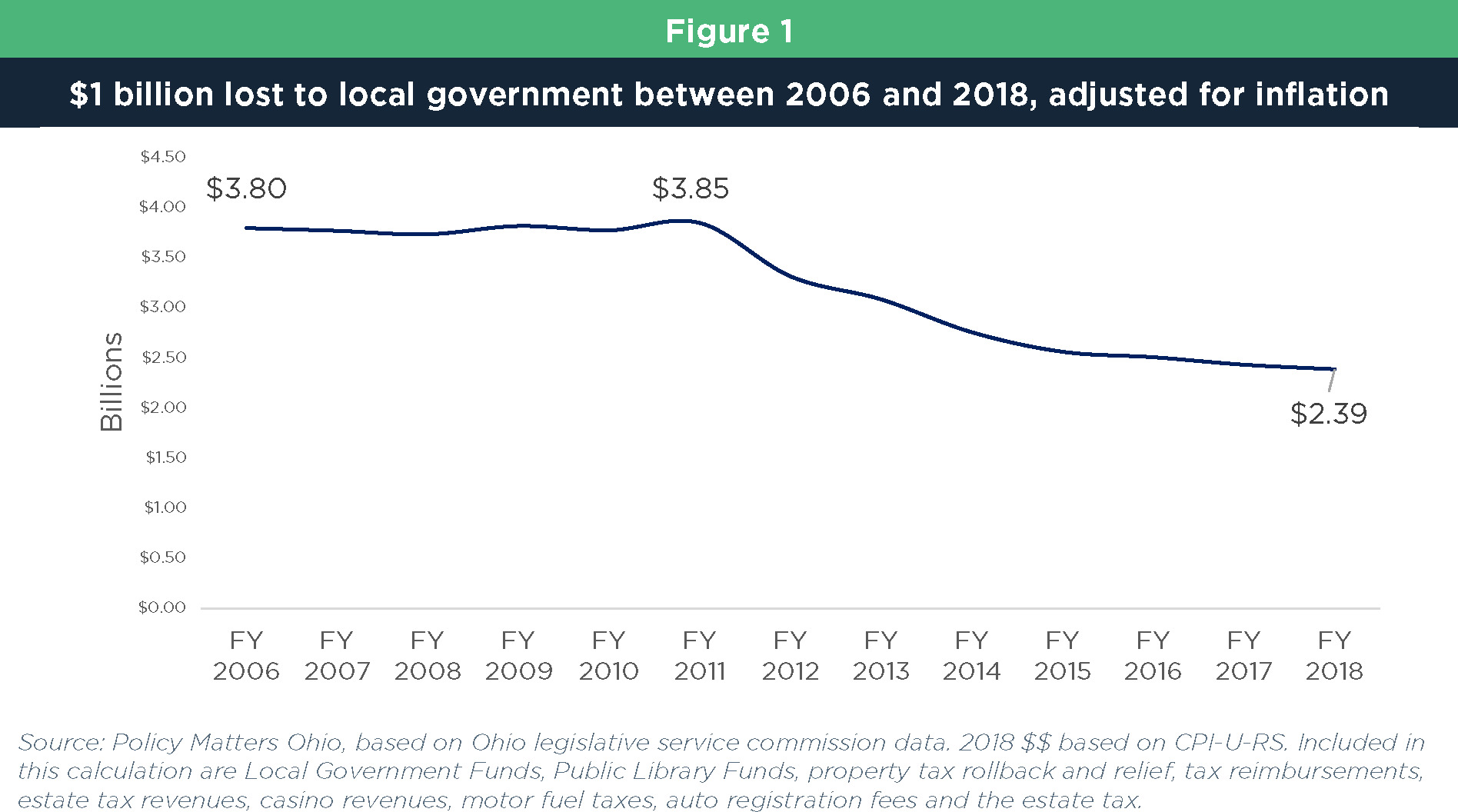 In Ohio, local government funds police, courts and social services for seniors, people with developmental disabilities, mental illness or addiction. It also distributes federal assistance through programs like Medicaid and SNAP food aid. Many of these services are funded jointly by state and local government, but delivered locally. Historically, the state provided flexible funding that allowed local officials to deliver services in a manner best suited to local needs. The flexible funding partnership has eroded as the state slashed its share in recent years. A key revenue-sharing program, the Local Government Fund (LGF), was cut in half. Local tax sources (like the estate tax, which largely funded municipalities, or the sales tax, which funds counties), were reduced or eliminated. The state provided reimbursement for some of the biggest tax losses, but those reimbursements were also phased out.

Flexible state aid that is not tied to a particular use continues to decline in the executive budget, dropping by $151 million over the two-year budget period compared to the current budget period. This loss is due to the 2018 removal of Medicaid managed care from the state sales tax base, which counties piggyback with a local sales tax. There was a transition fund in the current budget to ease the loss but the fund is not renewed in the executive budget. Local governments see almost $600 million in additional funding for road and bridge repair due to the gas tax hike in the transportation budget and an increased share of the new revenues that will go to locals. This is helpful, but insufficient: Counties alone could use most of the increase to meet current needs, but on top of that, municipalities and townships have mounting needs for maintenance and repair of roads and bridges.

The executive budget provides funding to meet new and growing needs of local governments in particular service areas. For example, $118.6 million in new dollars over the biennium almost triples state support of indigent legal services, which provides court appointed attorneys to represent accused people who cannot afford a lawyer. This safeguards constitutional rights, which the state Public Defender found to be compromised in some places by lack of funds. The executive budget also doubles state funding for child protective services, which has faced soaring needs with the drug epidemic and for which state support has ranked the lowest in the country.