Ohio had 3,310 drug overdose deaths in 2015, second only to California, with more than three times as many people. Ohio tied Kentucky for third worst in the nation with 29.9 deaths per 100,000 people, behind New Hampshire and West Virginia. Deaths have spiked by about twenty percent a year for each of the last two years. The problem is growing and since 1999, Ohio has far outpaced our neighbors.

The Kasich Administration has embraced the federal expansion of Medicaid, in no small measure because of the treatment if affords to mentally ill and addicted Ohioans. The Governor’s Office of Health Transformation included a graph of the rising problem the drug epidemic in Ohio with materials about the governor’s budget (Figure 1).

Mental illness and substance abuse are linked. The National Survey of Substance Abuse Treatment Services (N-SSATS) reports almost half of those seeking help for addiction have mental illness. While Medicaid expansion is very important to treatment, Ohio still lacks treatment infrastructure for both addiction and mental illness, particularly for those of modest income.

The recommended number of public psychiatric beds for people in crisis is 40 per 100,000. 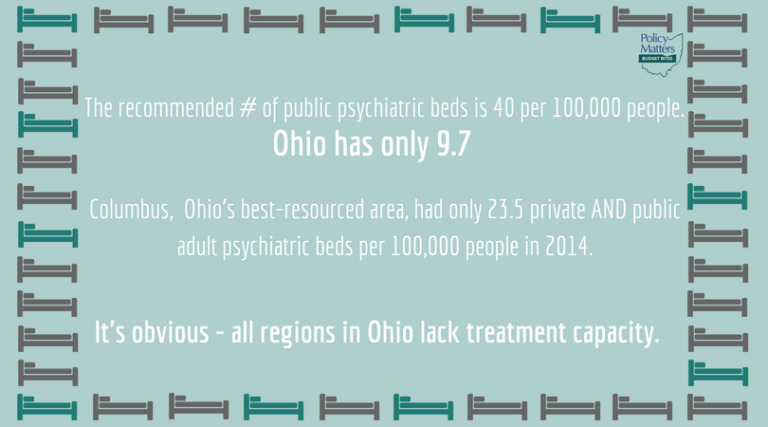 The Ohio Association of County Behavioral Health Authorities has proposed funding of $27 million to fight the public health emergency. Their plan would stem the epidemic with regional mental health crisis stabilization centers and withdrawal management centers as well as support for longer-term addiction care. The Ohio Council of Behavioral Health and Family Service Providers supports this proposal and goes further, calling for additional access to recovery housing ($10 million a year), more in-patient beds for children and adolescents ($45 million a year); universal prevention services in all Ohio schools and targeted help for children most at risk: those in foster care/juvenile justice/mental health and other systems ($33 million a year). Other mental health advocates have further proposals.

Ohio knows how to deal with the drug epidemic. Many proposals to stem the crisis have been described in testimony to the legislators of the House Finance Committee Health and Human Service subcommittee during the past month.

The problem is, the Administration has not included funding for these critical services in the executive budget. The governor’s budget boosted funding for mental health and addiction services in fiscal year 2017 compared to 2016, but since then, the funding is flat. In fact, over the two-year biennium, funding declines, on an inflation-adjusted basis. Administration officials point to upcoming federal grant opportunities and growth of private-pay beds. But the future of federal programs is uncertain in the face of a presidential budget that slashes federal spending. Private-pay beds will likely be inaccessible for millions of Ohioans covered by Medicaid, the largest health insurer in the state. Changes to the application of federal Medicaid rules restricting in-patient coverage in hospitals with more than 16 beds might provide more treatment for short-term psychiatric crisis. But it does not address the length of care needed for withdrawal management, essential to stemming the drug epidemic. Medicaid expansion, still threatened by Congress, has been a tremendous help for Ohioans. And even Medicaid could never do enough.

Mental health and addiction services and infrastructure need dedicated state resources from the General Revenue Fund. Funding can be provided by closing unnecessary tax breaks in Ohio’s $9 billion tax expenditure budget. Many of these tax breaks are not creating jobs or economic benefit. For example, the tax break on pass-through business income amounts to $600 million a year in 2019. Yet, a large share of those eligible for the exemption don’t employ anyone at all. The break doesn’t go just to small business owners, but to partners in big law firms and owners of much larger firms.

Funding could also be provided by restoring top income tax brackets, which have been eliminated over the past decade, draining $3 billion dollars from the state’s ability to provide needed public services.

Ohio lawmakers have prioritized tax cuts benefitting the wealthy over pressing needs of everyone else. It is time to start investing in what the people of the state need for a healthy, productive life.