Public higher education institutions will be stretched thin with Governor Kasich’s budget proposal. He requests a 1 percent increase in State Share of Instruction, the main source of funding the state provides Ohio’s 14 public universities, 24 regional branch campuses, and 23 community colleges for fiscal year (FY) 2018 and 2019. Over the next two fiscal years, State Share of Instruction would increase by just $39.8 million, less than a fourth of what experts say is needed. The combination of basically flat funding and a tuition freeze will mean colleges continue to be asked to do more with less. The state has committed to increasing the share of Ohioans holding a degree or credential but the legislature has not provided the system with the resources needed to increase attainment.

The Inter-University Council of Ohio, an association of public universities, estimated public universities would need a 4.5 percent increase in state support each fiscal year, a total of $180 million, to maintain quality and current services. The Council’s request is in line with fiscal year increases in the prior biennial budget. Policymakers dramatically cut higher education funding after the 2008 recession. It took nearly seven years for funding levels to recover and additional investment is sorely needed. State lawmakers have favored cutting taxes for the wealthy instead of bolstering revenue to fund higher education and bring down tuition cost.

State funding of higher education over time with inflation adjustment 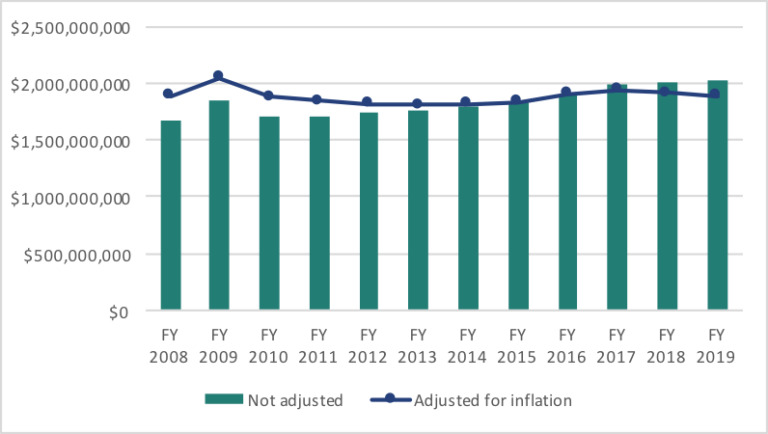 Comparing the prior biennial budget to the current proposal, funding is up 3.5 percent – not enough to keep up with inflation. With inflation factored in, funding is $44.4 million less. Additionally, inflation-adjusted funding is basically unchanged from FY 2008 to FY 2019. Without actual increases in funding, colleges and universities will struggle to meet student needs.

In response to the rising cost of college, Kasich’s budget proposal recommends freezing tuition. Tuition freezes do not address the root cause of unaffordable higher education: insufficient state funding. Tuition would be frozen for undergraduates at four-year public universities. Community college and branch campus students, who are often low-income, may work many hours, may have children of their own, and may be entering college after working for several years rather than coming straight from high school, will still pay more in tuition each year. Tuition freezes provide modest relief for students and further squeeze tight university budgets.

College unaffordable for many

When the state does not fully fund public institutions, colleges and universities pass the costs on to students, making higher education unaffordable. For FY 2017, students paid an average tuition of $9,745 at main campuses, $5,787 at branch campuses and $4,224 at community colleges. The average cost of room and board at main campuses is $10,470. Nationally, Ohio is ranked 45th highest in college costs with community colleges and public universities costing 11.5 percent and 14.5 percent more than the national average, respectively.

Most Ohio families cannot afford college. The Institute for Research on Higher Education found on average the lowest income families would need to spend 81 percent of their income to pay for one year of the net price of a public university, which includes tuition, fees, and room and board less financial aid; and 38 percent for community college. For families making $48,000 to $75,000, 31 percent and 15 percent of annual income is needed to pay for the net price of public university and community college, respectively. The exorbitant amount students have to pay for college has contributed to 67 percent of the graduating class of 2014 having student debt, which averages $29,353.

Ohio has prioritized higher education attainment and workforce development; however, tax cuts and insufficient funding for public institutions do not support those goals. Inadequate state support for higher education means students pay more to earn degrees and certificates. The state projects that by 2020, 64 percent of Ohioans will need some higher education. To achieve that goal, Ohioans need to be able to afford higher education. For low-income students, increasing funding for the Ohio College Opportunity Grant, Ohio’s only need-based aid program, could improve access and outcomes.

The state can help students and families afford college by investing more money in public institutions. Universities have requested approximately $180 million more per year in the State Share of Instruction to continue to provide the current level of service. Ohio can fund this request by eliminating unproductive tax expenditures. For instance, Governor Kasich has proposed reductions in tax expenditures during the past two budget cycles. He would eliminate special discounts for paying cigarette and other taxes on time, tax breaks for big distribution centers, and the discount retailers receive for collecting the sales tax. These are just some of the tax expenditures that could be used to make college affordable for students and families. To improve affordability long term, Ohio will need to increase revenue and seriously invest in higher education to achieve the state’s degree and certificate attainment goals.