A previous version of this report had misstated that Senate Bill 66 was a budget bill. SB66 is separate legislation.

Proposed criminal justice legislation and changes to the 2018-2019 Ohio budget would likely reduce the number of inmates and overall costs of incarceration and make communities safer by channeling some offenders into programs that are better at reducing recidivism.

The reforms come at a critical time: Ohio’s prisons are now operating at 132 percent of capacity. That strain puts officers, inmates, and communities at risk. Overcrowded prisons are more prone to violence. Formerly incarcerated people are more likely to commit new crimes if they are exposed to violence while in prison or if they miss out on rehabilitative programs due to strained resources. That’s why these proposals to reduce incarceration for low-level offenders make a lot of sense. 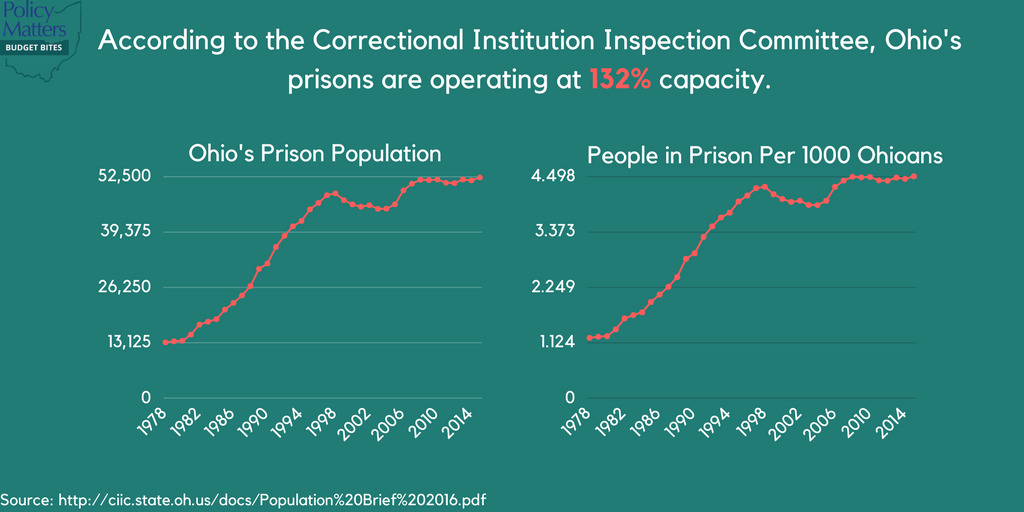 Both the House version of the budget (House Bill 49), separate legislation (Senate Bill 66)would change sentencing rules to reduce incarceration for low-level offenders. Under the House bill, people convicted of fifth-degree felonies and sentenced to 12 months or less would not be sent to state prisons. Those with current or previous violent or sex offenses would still be incarcerated.

These programs can produce better outcomes and are less costly than incarceration. Today, Ohio incarcerates roughly 50,440 people at an average cost of $67.84 per inmate per day. Community corrections programs would receive $23 per day from the Department of Rehabilitation and Corrections. While those figures aren’t directly comparable – since part of the prison cost covers fixed costs like the prison itself - it’s clear that these measures would bring major savings to the state.

To support programs, communities would receive $19 million in grant funding from the Ohio Department of Corrections in 2018 and $39 million in 2019. Governor Kasich’s budget proposal doubles overall funding to community control programs from $40 million to $81 million over two years: an amount that is expected to be more than offset by reductions in the prison population.

The Ohio Legislative Service Commission estimates the new law and budget earmark could prevent 3,400 Ohioans from serving time each year.

The House budget funds an existing pilot program already underway in eightcounties,and extends it across the state. Similar programs in effect for those who’ve committed misdemeanors diverted more than 22,000 people from Ohio jails and prisons in 2016. The Senate budget would also change the expressed intent of the law to include rehabilitation – not just punishment. This will make the law more effective in its other goal: to keep the publicsaf

The Senate bill would expand eligibility for drug and alcohol treatment in lieu of conviction and modify rules to streamline the court’s granting of treatment. Those pleading guilty to fourth and fifth-degree felony charges related to drug use would qualify. The change would also protect these defendants from being punished after they’ve already served (called “collateral sanctions”) by extending the courts’ power to seal records.

Diversion programs intended to keep people out of prison sometimes still lead to incarceration when the person breaks a rule in the community corrections program but has committed no new crime. The House budget would enable jail sentences of up to six months for such rule-breaking, but it is a step away from more punitive measures on the books today.

The new legislation would make it easier for formerly convicted people to reenter the workforce by expanding the use of Certificates of Qualification for Employment (CQE). Hundreds of licensing requirements and legal restrictions now bar once-convicted people from jobs, and employers routinely decide not to consider them. This certificate does not seal or expunge the record, but serves as a vote of confidence in the worker and can help put employers at ease.

Changes in our response to certain crimes in the budget and new legislation could make Ohio communities safer and save the state money, opening up resources to reinvest into our communities. The legislature should adopt the changes in the House budget and Senate Bill 66.