Severance taxes are taxes on the value of oil and gas extraction. Strong drilling states like Texas have severance taxes as high as 7.5 percent on natural gas. Governor Kasich proposed an increase to Ohio’s severance tax in the executive budget and the legislature included this increase in its budget bill. In past years, legislators have rejected the proposal. By supporting it this time, legislators and the Governor will make Ohio better able to manage the costs that come with increased drilling and the needs of Ohio’s drilling communities.

The severance tax is an ancient form of taxation established to compensate the king for the value of natural resources extracted – forever – from his lands. Today it is a standard way to cover external costs of production like air and water pollution, enhanced fire and police protection, traffic control, or wear and tear on roads. Revenue from the severance tax can also support services and help diversify the economy. This is especially important considering the economic boom and bust cycle that occurs with natural resource extraction.

Ohio’s oil production peaked at the end of the 19th century. The state established a severance tax in 1973 when the industry was old and depleted. A new form of drilling, hydraulic fracturing, or “fracking,” brought the drilling industry back to Ohio. Today, Ohio ranks 9th in the nation for natural gas. Production trendlines since 2011 show strong growth (Figure 1). New pipelines carry gas and oil from Ohio’s shale region to markets where prices are higher than in the Midwest, indicating growth will continue 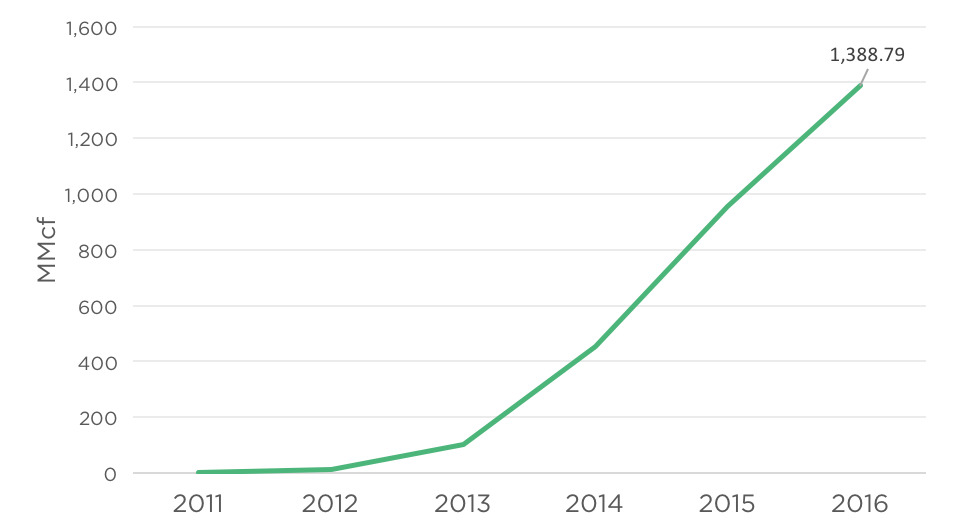 Ohio’s oil and gas severance tax is based on quantity, not value: a dime per barrel of oil and 2.5 cents per thousand metric cubic feet (Mcf). Regulatory cost recovery assessments double this to 2 dimes a barrel and to a nickel per Mcf, but even so, it is very low. Between 2001 and 2010, Ohio’s severance tax equated to 0.37 percent of value on natural gas and about 0.2percentonoil. By comparison, the base rate of the severance tax on natural gas is 7.5 percent (4.6 percent for condensate) in Texas, 6 percent in Wyoming, 7 percent in Oklahoma and 5 percent in Arkansas and West Virginia. 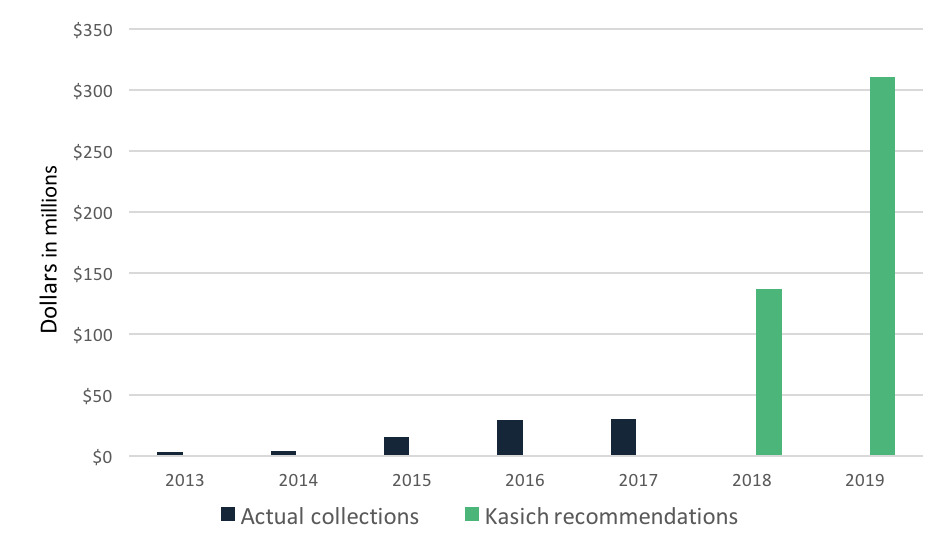 Ohio’s lawmakers have been reluctant to enact a higher severance tax. The fracking industry threatens to leave, but they would leave valuable resources behind. There’s a lot of oil and gas insoutheasternOhiohills, and a lot of investment. The oil and gas industry is extracting more and more of Ohio’s valuable natural gas without paying their fair share in taxes, even as state revenues weaken and needs forpublicservices,infrastructure and diversified economic development grow in the shale region. Legislators should follow the Governor’s lead and increase the severance tax on fracking so the industry contributes its fair share to the people of Ohio. It's past time to do the right thing.

Taxing fracking is a good idea; swapping it for income tax is not
July 13, 2012

Taxing fracking is a good idea; swapping it for income tax is not
July 13, 2012