By Wendy Patton and Zach Schiller

In 2006, massive opposition from all over Ohio thwarted a constitutional amendment that would have placed a spending limit on investment in state and local public services. Ohio’s state lawmakers instead imposed a version of it on themselves (and future General Assemblies). They passed the “State Appropriation Limitation,” (SAL) which restrains growth in most state General Revenue Fund (GRF) dollars. Now, the limit could keep legislators from adding even modestly to Governor DeWine’s proposed budget, or even from honoring the commitment to public transit made through the transportation budget.

As a statute, and not a constitutional requirement, the SAL may be suspended or revoked by the General Assembly. It should be, since this artificial limitation could stand in way of correcting long-term underinvestment in Ohio’s public education system and other key public services. In fact, the arbitrary formula will prevent state spending from ever fully recovering when revenues plunge during a recession. It also is likely to be unenforceable.

A CHOKE COLLAR ON OHIO’S BUDGET

The governor forecasts the SAL in the executive budget. It calls for annual growth of no more than 3.5% or population growth plus inflation, whichever is greater. Ohio’s budgets cover two years and under the SAL law, every other budget period (in other words, once every four years) the limit is updated (“recast”), using a recent estimate of the year’s GRF spending as a base for the calculation, not the old SAL used when the outgoing budget was enacted. The chart below shows three trendlines. The top line shows what the trend would have been if the growth rate was limited to a 3.5% increase every year -- the SAL without a recast (A 3.5% growth rate in state GRF spending has always been used because it outpaced inflation plus population growth in every year). The middle line is the actual SAL limit used, lowered by the “recast.” The bottom line shows actual GRF state dollars appropriated by the legislature since the SAL was enacted.

Recasting the SAL locks in recessionary levels of spending and prevents restoration. Altogether, the SAL for the 2020-2021 budget period is $12.7 billion below what it would have been had it been set according to a 3.5% annual increase. The first SAL recast, for the 2012-13 budget, ratcheted the limit down by $3 billion. The second recast, affecting the 2016-17 budget, made no difference. The third, for the 2020-21 budget currently under discussion at the statehouse, ratcheted the limit down again by almost a half billion dollars. This time it was not because of recessionary conditions, but because lawmakers failed to make needed investments in the 2018-19 budget, which underspent the SAL limit by $1.1 billion in 2018 and $1.4 billion in 2019. In other words, because the SAL is figured based on recent spending levels, the state’s underinvestment in past years now is becoming a choke collar on the upcoming budget. 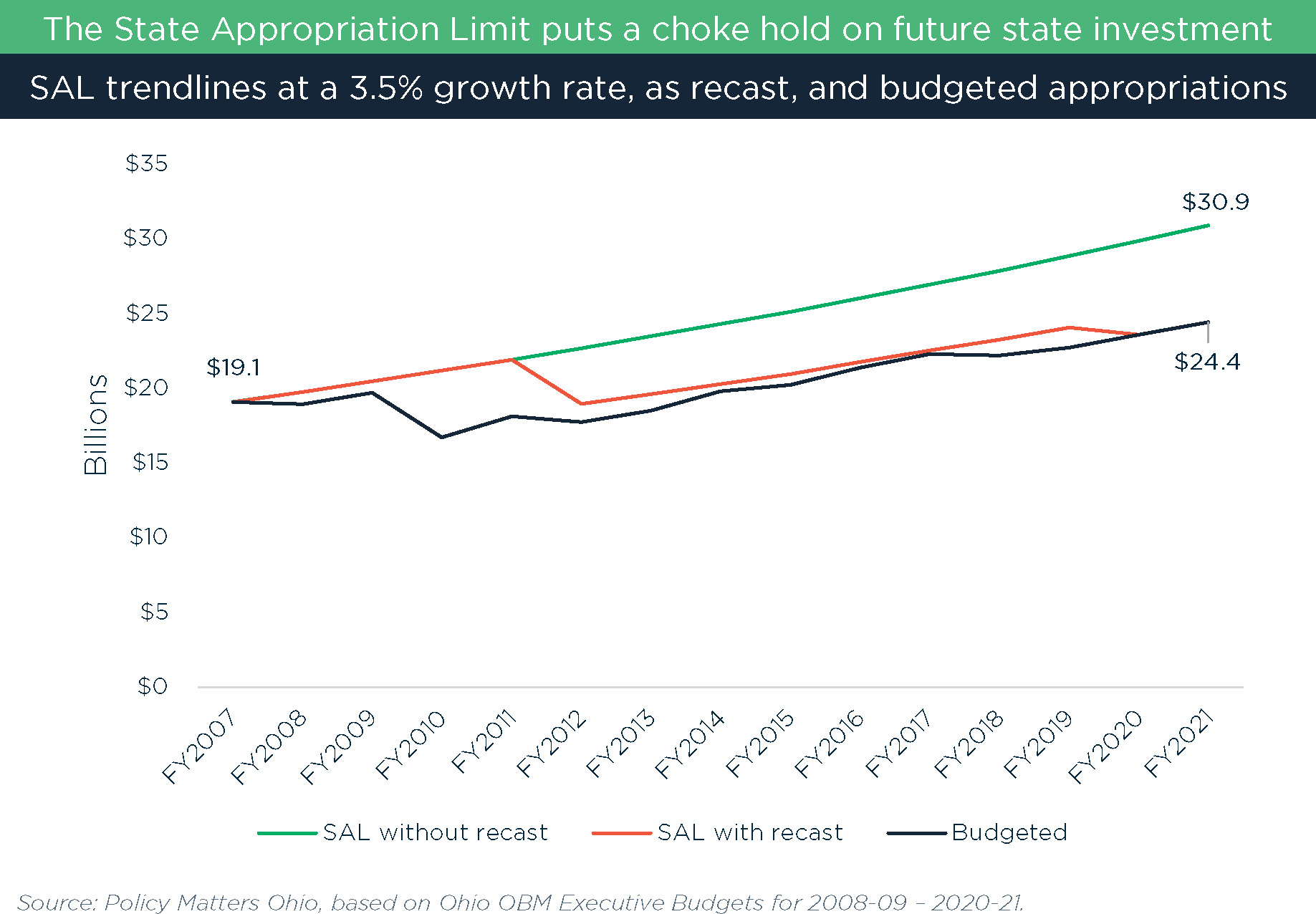 A 2006 research memo by the Ohio Legislative Service Commission pointed out that the principle of separation of powers among the branches of government likely prevents the courts (or anyone else) from enforcing the SAL. So far, lawmakers have not exceeded it. They did, however, change it in 2014-15 budget bill, which allowed appropriations from outside the GRF to lift the cap in 2016. This illustrates that the SAL can and should be changed as needed.

When lawmakers instituted the SAL in 2006, Ohio already had underinvested for too long. College tuition was already among the highest in the nation and financial aid had not kept up. Education funding, unequal between poor and rich communities, was unconstitutional. In most years since, lawmakers appropriated less than the SAL by hundreds of millions or even billions of dollars. The 2012-13 budget was over $1 billion below the SAL in both years of the biennium, although the recast itself reduced the limit by almost $3 billion. The trend of spending less than the SAL continued in subsequent budgets as lawmakers prioritized tax breaks to corporations and tax cuts which largely benefitted the wealthiest taxpayers. Meanwhile, they failed to make needed investments to improve our schools, maintain our parks, make college affordable, stem the addiction epidemic and more.

This is a key reason why the DeWine budget, with investment to repair and rebuild eroded services, bumps up against the SAL. Governor DeWine has pointed out that investing is conservative because it reduces costs of the future. The budget he proposes starts to invest, but does not go nearly far enough. The last thing that should stand in the way of restoring essential public services is the artificial, arbitrary SAL.