Governor DeWine has said it is time to invest in Ohio. He started to walk the walk by pushing the General Assembly to increase the gas tax to repair pocked roads and weakened bridges. He increases support for important children’s programs in his 2020-2021 budget proposal, but years of disinvestment in childcare, education and other essential services leaves needs unmet. He needed to lead on revenue for education, health and human services and other pressing needs in the operating budget the way he did with the Transportation Budget.

After years of tax cuts and for the wealthy and powerful and ballooning special interest tax breaks, many Ohio communities are in desperate need of state aid. So are families. Low-wage jobs dominate the economy: even full-time work leaves a parent with two kids eligible for – and needing - federal food aid in six of the state’s 10 biggest job groups. But it’s harder to get help with the high cost of child care in Ohio than in 49 other states. Ohio has 8 major metropolitan areas and countless medium sized and small cities and towns, but spends less on public transit per person than rural Montana. Eighteen percent of Ohio’s nearly 123,000 miles of public roads are in poor condition, costing each Ohio driver $545 per year.

There’s rebuilding to do, but not a lot of revenue to do it. The proposed operating budget for 2020-21 grows by just 3 percent after inflation, compared to the current two-year budget.

Table 1 shows that total state budget is made up of four primary types of funds: federal dollars (the biggest share, making up 37 percent of the total); the General Revenue Fund, which is made up of Ohio taxpayer dollars; dedicated purpose funds, which raise revenues for specific uses through dedicated fees and charges, and fiduciary funds, which the state collects for other entities and passes on to them: the local sales tax, for example.

All the attention goes to the General Revenue Fund (GRF), where state taxpayer dollars are deposited and divvied up among public services. The governor’s budget appropriates $24 billion in state GRF dollars in 2020 and $24.8 billion in 2021, an increase of $1.7 billion (3.8 percent) after inflation.

A priority in his budget is children. Medicaid Director Corcoran highlighted an investment of $50 million a year to help stem infant mortality – Ohio‘s shame, with the 7th highest infant mortality rate in the nation and the 2nd highest for Black infants. Director Hall of the Ohio Department of Job and Family Services outlined new funds for children’s services and child care providers in budget testimony. However, her agency is not even proposing funding the Governor’s promised expansion of child care aid to more families, a crucial failing. There’s other promises, but not enough money for long-neglected needs. In some cases federal dollars will be used or unspent funds rolled over from last year. But there are no new tax sources. In fact, between tax breaks and a proposed change in age for buying tobacco, GRF revenues shrink by hundreds of millions of dollars.

It will be hard to restore neglected services like child care aid, lower tuition and reverse deep cuts to local governments without new revenues. Tax cuts since 2005 sucked $6 billion a year from Ohio’s revenue system, benefitting top earners and corporations. Those tax cuts made Ohio’s state and local tax structure more unfair. By 2018, the poorest were, on average, paying twice the share of their income in state and local taxes as the richest (Figure 1). 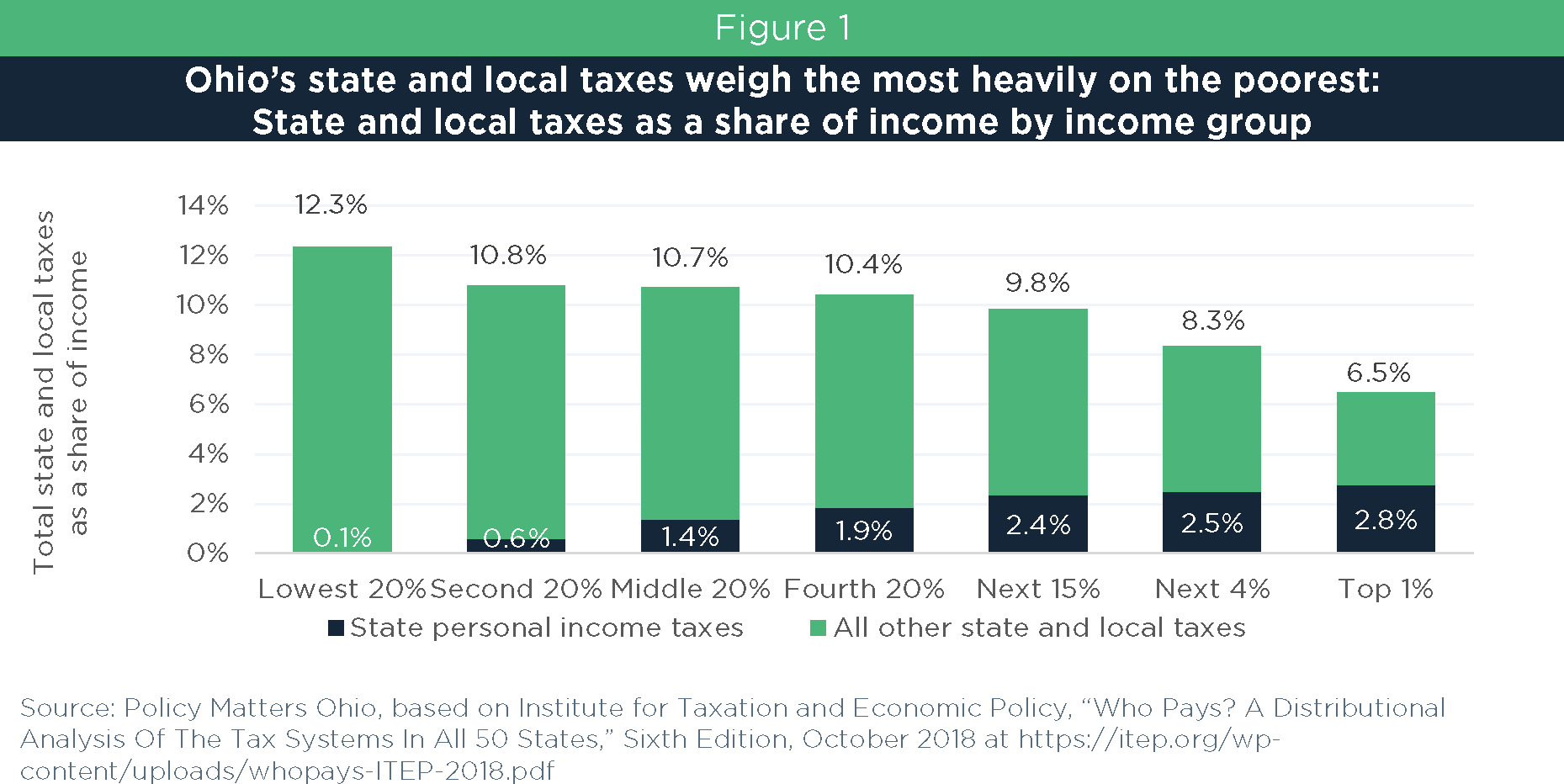 Ohio’s lawmakers need to clean up our tax code so it raises enough revenues to meet the needs of Ohio communities and people. There are lots of ways to do this: by collecting the use (sales) tax directly from on-line retailers instead of through individual consumer’s income tax returns, or by taxing new industries, like the growing fracking industry, or Uber, or Airbnb. Legislators could close some unneeded tax breaks: There are 134 on the books, some growing without examination or constraint for over 80 years. Closing even a few could raise hundreds of millions of dollars. And that doesn’t include one of the biggest, an unproductive $1 billion break for business owners that deserves elimination. Income taxes should be restored on the wealthiest Ohioans, to raise needed revenues and to improve the fairness of the state and local tax system.

The governor is right: it is time to invest in Ohio and Ohioans. To do the job right will mean raising revenues to pay for the services Ohio and Ohioans need, and raising them fairly.