Nothing healthy about it

Nothing healthy about it

All people need health care. Without health insurance, a trip to the doctor can send a family into a financial tailspin. Making sure everyone can afford medical care is good for working people, families and the entire community. It’s good for the health system - and for the economy. Federal Medicaid expansion dollars, for example, support 54,000 jobs across all 88 counties of Ohio.[1] 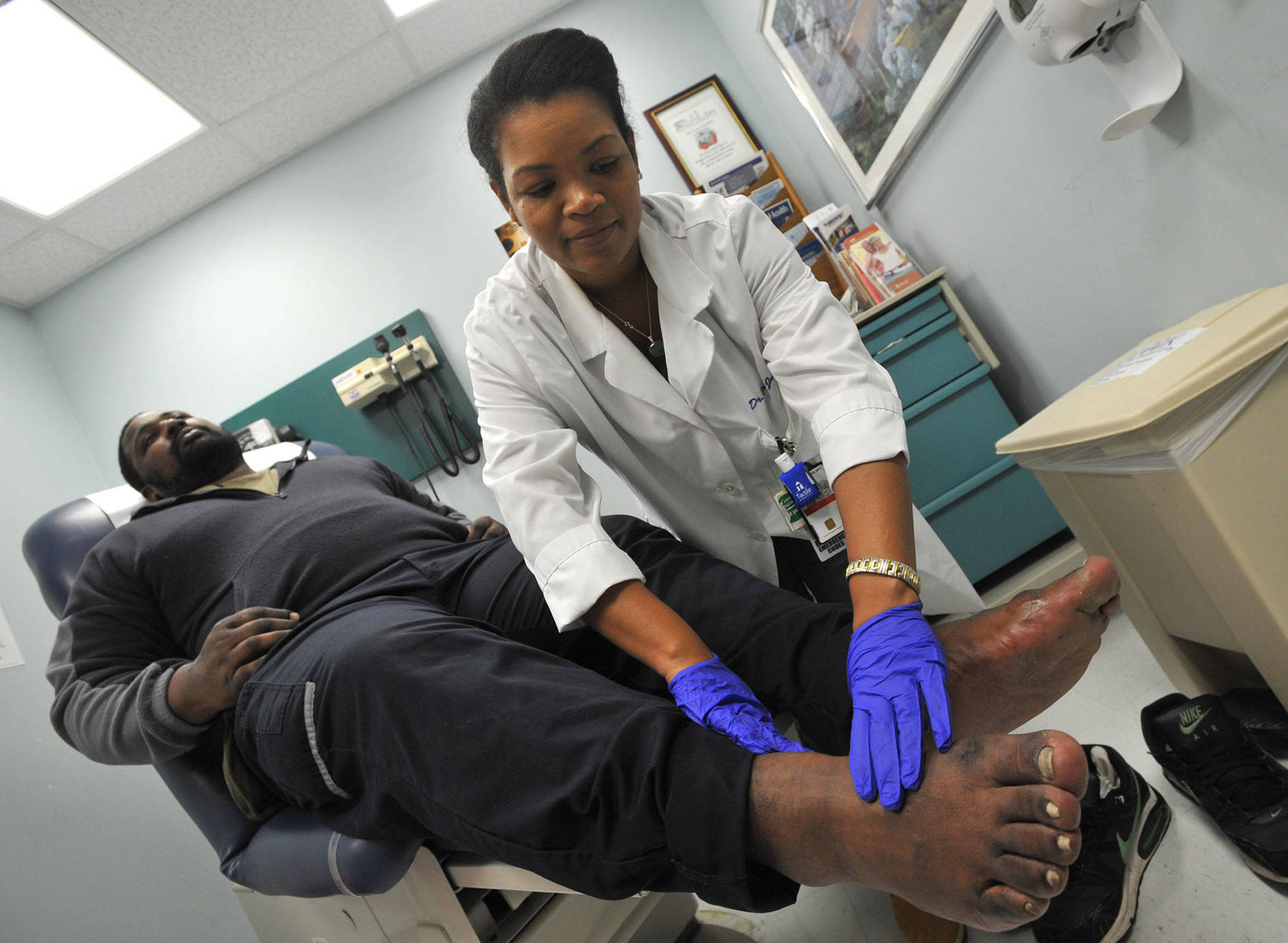 In 2017, most Ohioans had health insurance,[2] thanks in large part to Ohio’s expansion of Medicaid to low-income adults. But there are threats to this progress. Ohio House Representative Jim Butler is again[3] promoting a proposal that will most likely limit services for most non-elderly adult Medicaid enrollees. Once again, he’s calling it the “Healthy Ohio Plan” (HOP), even though it is likely to make Ohioans less healthy.

The HOP is based on Indiana’s Medicaid program, which requires non-elderly adults covered by Medicaid to make a monthly payment for health services. Known as the Healthy Indiana Plan (HIP), people who can’t pay the fee (referred to as a premium) have access to fewer services than those who can. Evaluations have found that the HIP premium structure confuses beneficiaries, so not everyone who is eligible is able to enroll and maintain coverage.[6] Between February 2015 and November 2016, almost 60,000 eligible people either lost coverage (disenrolled) or never got in because they missed the first payment, or later payments. Almost half (287,000) who did enroll subsequently lost access to some health care services because they were not able to keep paying the premiums, as required.[7]

Representative Butler’s HOP appeared briefly in the final version of the House budget for 2020-21, House Bill 166, but was removed before the final vote.[8] There’s danger it may re-appear later in the budget process or in a stand-alone bill. Legislators should reject it.

POOREST CARE FOR THE POOREST PEOPLE

HOP would require the DeWine Administration to ask the federal government to waive rules that protect people in Medicaid. If approved, Ohio would reconfigure the state Medicaid program for about a million low-income, non-elderly adults.[9] The new program would charge “premiums” (monthly payments) for those enrolled in a “Plus” plan for Medicaid services and offer a “Basic” plan with fewer services for those who can’t pay.

Premiums: The monthly premiums would range from a minimum of $1 for those making less than $600 per year and rise, based on 2% of annual income, to a cap of $20 per month. Participants would have to pay at least a quarter of that, but employers and non-profits could help.[10] Those who pay regularly will stay in the Plus plan. Those who can’t would get placed in the Basic plan, which will offer fewer services

Plus plan: HOP Plus would cover doctor visits, hospital inpatient and outpatient services, pregnancy-related services, mental health services, prescription drugs, laboratory services, and “other services the Medicaid director deems necessary.”[11] Although the language is not clear, it appears this plan would offer federal mandatory services (see chart below) and some additional state services.[12] Enrollees who miss two payments in a row (60 days) or fail to submit required paperwork within 60 days will be placed in the Basic plan and ‘locked out’ of Plus for 12 months.[13]

Basic plan: The HOP Basic plan would only offer services mandated by the federal government and services the Medicaid director deems necessary. Services in the basic plan have to be inferior to those of the plus plan: the proposed language of the law says the Medicaid Director “…shall ensure that there is enough of a difference between what the plus component and the basic component cover so as to provide a strong incentive for healthy Ohio program participants to comply with the requirements to participate in the plus component.”[14]

Exemptions: The only exemptions to HOP are for people who are wards of the state, are pregnant, have cancer or severe and persistent mental illness, or are making ‘satisfactory progress’ in drug/alcohol addiction treatment.[15] The services these exempted individuals would receive is not clarified in the language. They should receive the same treatment they do today, or the enhanced services of the Plus plan, which the statute says must include mental health and pharmaceutical services.[16] 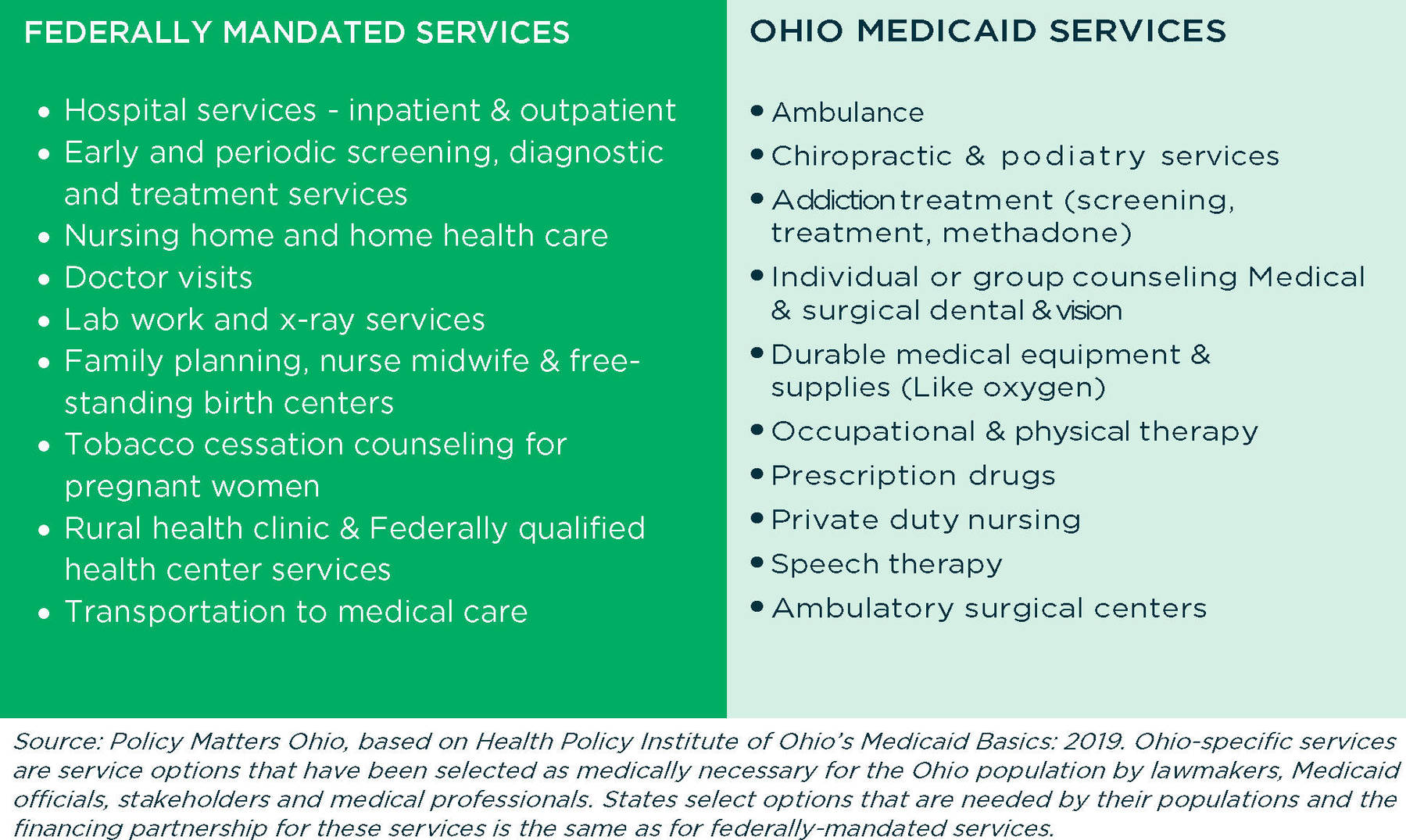 COMPLEX PAPERWORK AND RULES OF HOP PLUS

In addition to charging fees, the Plus plan has a complex paperwork component that resembles a Health Savings Account (HSA) model. An HSA is a high-deductible insurance plan tied to a tax-exempt medical savings account primarily used by upper-income tax filers. The goal of an HSA is to save money by limiting use of health care and through tax planning.[17]

Plus participants would get their own Medicaid “Buckeye Account,”[18] which could work sort of like an HSA. Each year participants would get 2,500 ‘Medicaid points’ and the value of what they have paid into the system through their monthly payments. Estimates of medical services would be provided to enrollees based on value in points.[19] As noted below, it is not clear how the this relates to the actual health care people receive.

The language indicates participants would pay for 20% of the cost of services through “co-insurance,” which presumably is made up of the points in their Buckeye Account.[20] It is not clear if this is 20% of each service or 20% of total health care over some period of time. It is not clear who pays the other 80%; it should be paid by Medicaid.

The language of the proposal that appeared briefly in House Bill 166 said that people in Plus face limits on the care they can receive (with an annual ‘cap’ of $300,000 and a lifetime ‘cap’ of $1,000,000). Limits like this were among the most harmful elements of private insurance before they were banned by the Affordable Care Act. It’s not clear why this is included: The proposal also said care would not be not denied to those whose health care costs exceed the cap; they’d simply be moved out of the managed care plan and into a different category of Medicaid known as ‘fee for service.’ This may be more of a protection for the managed care plan than a limit on care for participants, but even if so, participants may not understand and forgo getting health care services they need.[21]

Plus participants would receive regular statements with a tally of points added to their account and points deducted for health care services used over the course of the month.[22] They would be encouraged to join health incentive programs to earn more points; the program is not defined in statute but is to be determined by the Medicaid Director.[23]

The language in the proposed law is not clear about what happens when the Buckeye Account is depleted. It may be that Medicaid continues to pay for services (like a private insurer). We asked Representative Butler for clarification, but he did not provide it by the time this brief was published.

The HOP would impose confusing requirements that would increase administrative costs and create barriers for poor families in getting health care, undermining the whole purpose of Medicaid. It would hurt families of all races and in all corners of the state.

High administrative costs. Managed care organizations found administration of programs like HOP was extensive and difficult. An evaluation found three states examined could not even account for the cost of administering these programs and two – Indiana and Iowa - had trouble crediting enrollees with incentive points when healthy behaviors programs were completed. [24]

Not affordable to low-income households: Seven of Ohio’s 10 biggest job groups leave a full-time worker with two kids eligible for Medicaid. Imposing monthly premiums on these households will be a hardship. It will be harder for the 10% of Medicaid-eligible households that have no income whatsoever.[25] Even $1.00 a month – plus the money for envelopes and stamps – make the lowest monthly premium a barrier.

Confusing: The HOP is similar to the Healthy Indiana Plan. (HIP). An evaluation of that program found people were confused by the program’s complexity: one in five who failed to pay an initial premium payment or missed a payment said it was due to confusion. [26]

Difficulty sending in a monthly payment: Almost a quarter of Ohioans would be unable to write a check or have funds electronically transferred for the premium because they are unbanked or underbanked.[27] These requirements would hurt Ohioans of all races, but African-American households are far more likely to be unbanked or underbanked than the population as a whole. Healthy Ohio imposes an inequitable burden on these households.[28]

People may skip care: The HSA model is not appropriate for low-income people, who already underutilize medical services.[29] Even for those in the Plus plan, monthly statements and tally of points used may lead to a perception that they won’t be able to get the health care they need. When people skip care, they often end up in more expensive emergency rooms.

Hundreds of thousands could lose health services: The Center for Community Solutions estimates that HOP will cause 125,000 Medicaid enrollees (12%) to disenroll altogether from the Medicaid program.[30] Hundreds of thousands more would lose medically necessary services as they are dropped into the inferior Basic plan.

Savings to the state represent loss to everyone else: HOP may not save any money. But if it does, it will cost Ohioans in other ways. Some people will lose medical services. Health systems will lose Medicaid dollars and may face higher costs of uncompensated care as people disenroll, fail to enroll, and/or lose medically necessary services in the Basic plan. Since the Medicaid expansion for low-income adults supports 54,000 Ohio jobs, local economies could be hurt.[31]

Studies show the impact of requirements like those of HOP restrict access to Medical services do not improve peoples’ health.[32] It gives the Medicaid director discretion over Ohio Medicaid services that are provided in addition to the federally mandated services and suggests they may not be provided at all in the Basic plan and possibly limited in the Plus plan.

The first time the Healthy Ohio plan was proposed, the Ohio legislature passed it but the federal government rejected the waiver proposal. "We are concerned about the state's request to charge premiums, regardless of income," said the government denial letter. "[Centers for Medicare and Medicaid Services] is concerned that these premiums would undermine access to coverage and the affordability of care, and do not support the objectives of the Medicaid program."[33]

HOP punishes people who can’t make monthly premium payments by reducing the health services they have access to. This may mean loss of medically necessary services most of us take for granted: prescription drug coverage, dental care, ambulance services, oxygen, wheelchairs and other essential services.

Health insurance payments fall to the bottom of the list when people face hard choices between rent, gas, school clothes and food. In 2016, many Ohioans understood that Representative Butler’s Healthy Ohio plan would mean a sicker, less prosperous state. The overwhelming majority of the 956 comments submitted during hearings on the plan raised concerns and expressed opposition.

There is no need for a second round with this proposal. It remains unhealthy for Ohio and Ohioans.

[12] State Medicaid services other than the federally mandated services have been agreed to over time by lawmakers, Medicaid officials, stakeholders and medical experts. They are paid for jointly by the state and the federal government. They are called optional because states can choose options suited to their population, not because they are not medically necessary. Ambulance service, for example, is considered optional, but is hardly that.

[25] E-mailed communication from Matthew Broadus of the Center on Budget and Policy Priorities, May 30, 2019.

[27] Seven percent of Ohioans are unbanked – they live on cash – and 17.4% of Ohioans are “underbanked,” relying on check cashing, money orders, payday loans, and similar exploitative financial products.[27] The lower their income level, the less likely people can easily afford the premium with a check or electronic funds transfer. In Ohio, 19.5% of black families are unbanked and 26.4% are underbanked.

[30] E-mailed communication from Loren Anthes of the Center for Community Solutions, May 23, 2019