An overview of the budget process, what goes into it and how money is spent

Ohio has four separate legislatively-enacted budgets.[1] The operating budget receives the most attention. It underpins most of the basic services provided by state government in education, agriculture, natural resources, commerce, health, human services, corrections and more.

Ohio’s legislative body, the General Assembly, has two chambers: The House of Representatives and the Senate. Ohio elects state representatives to 2-year terms and senators to 4-year terms. The 132nd General Assembly commences in 2017 with deliberations on a 2-year budget for state fiscal years 2018-19 (a fiscal year runs from July 1 to June 30. When we refer to years in this paper, we are referring to fiscal years, unless otherwise noted).

Ohio’s current budget, including all funds, adds up to $128.3 billion for the biennial (2-year) budget period used by the state. Broadly speaking, it is made up of three types of funds: 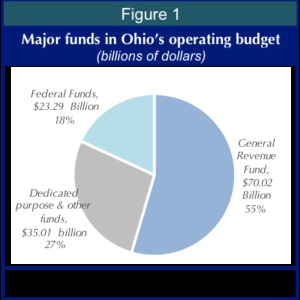 Ohio’s budget becomes law through legislation that lays out how much money will be used, and for what purpose. In other words, the budget bill “appropriates” funds for programs. The Governor starts preparing the budget about a year before it becomes law. This year, the governor’s version of the next budget, the “Executive Budget,” will be (electronically) delivered to the House of Representatives on January 31, 2017. Legislators will use this as the basis for a new bill. They’ll assign it a number and refer it to committees. The public will be invited to testify. They will pass the House budget bill toward the end of April and send it to the Senate for the same process. The Senate’s version will be passed by early June. A conference committee of Senators and Representatives will meet to settle the differences between the versions. It will be signed into law by the Governor by midnight, June 30 and will go into effect on July 1. 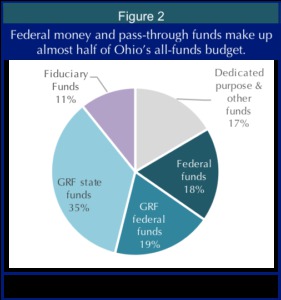 Figure 2 shows some distinctions within the three broad fund categories shown in Figure 1.

Public Investments: Where Does the Money Go? 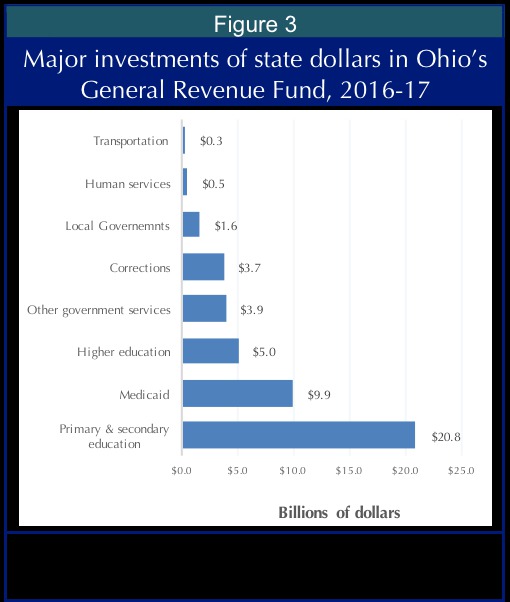 Figure 3 shows investment by major category in the $46 billion GRF of the current budget.

State GRF spending has been constant relative to the state economy for years, hovering between 3.9 percent and 4.5 percent of gross domestic product since 2006 (Figure 4). 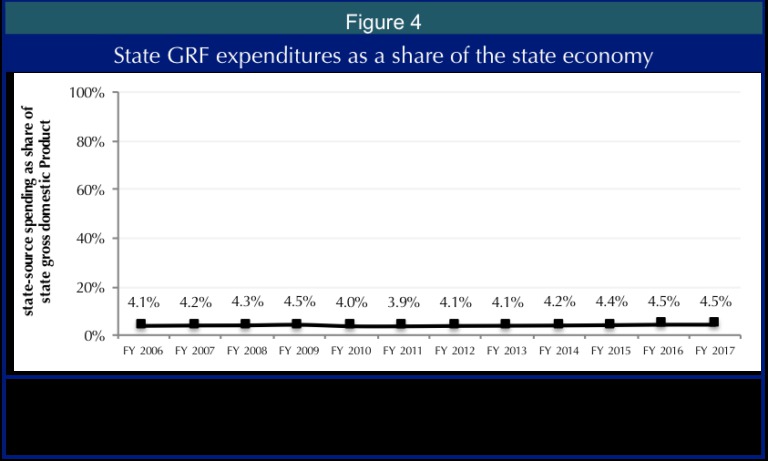 Figure 5 shows that state investments declined sharply in 2011. Adjusted for inflation, expenditures are almost back to the level they were a decade ago, in the recession. 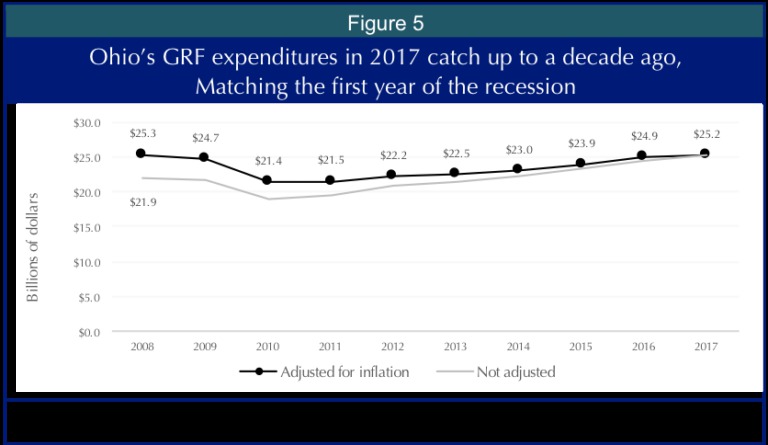 The next set of figures show 10-year investment in major categories of the GRF budget between state fiscal year (FY) 2008, the first full year of the recession, and FY 2017.

Funding for preschool increased in the current budget, but we have a long way to go to catch up with other states.[3] 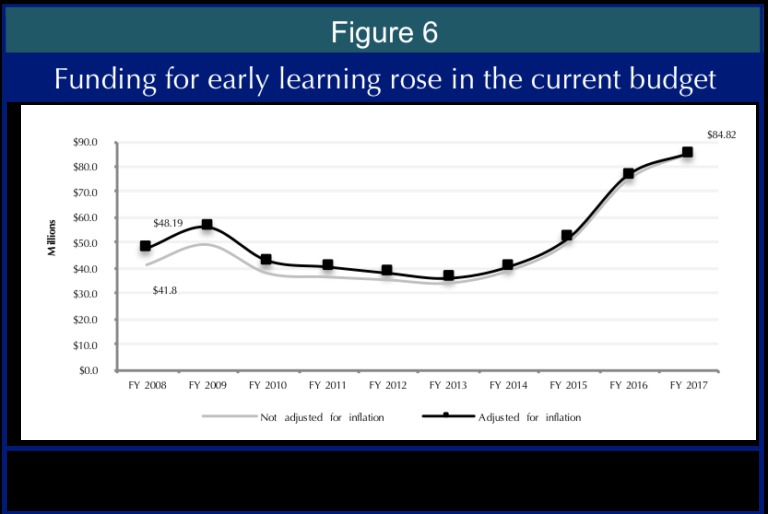 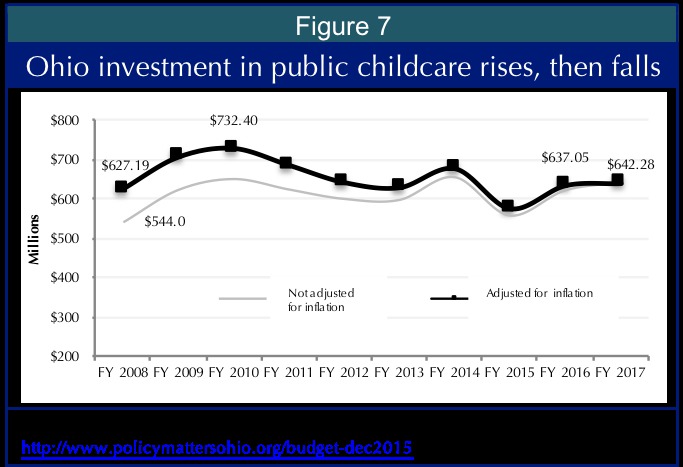 Funding for K-12 was deeply cut in the budget for 2012-13, with restoration over the next two budgets. Figure 8 shows core, formula funding over time, which is slightly less, adjusted for inflation, than in 2008, although overall K-12 funding has been restored. 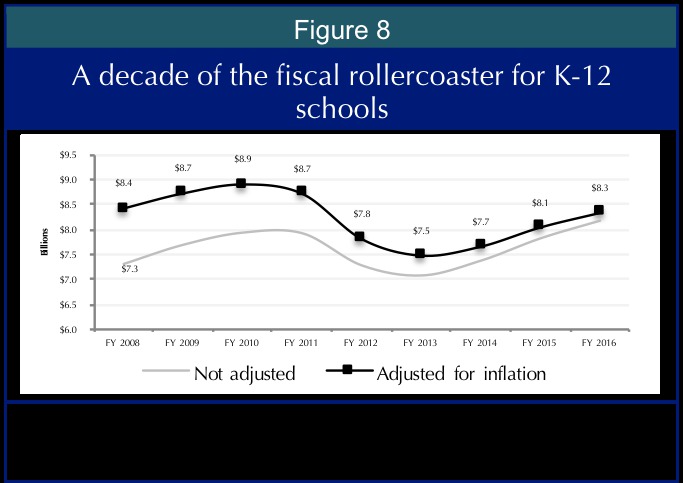 State investment in higher education fell with the recession and has not been completely restored. 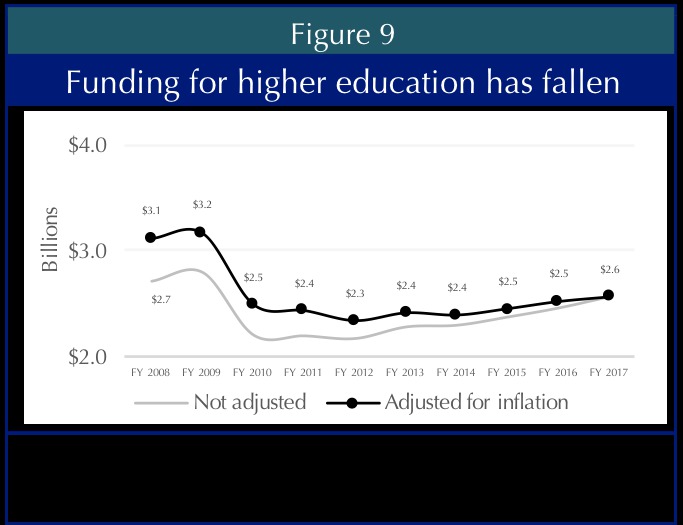 Medicaid spending has increased, but largely through expenditure of federal dollars. 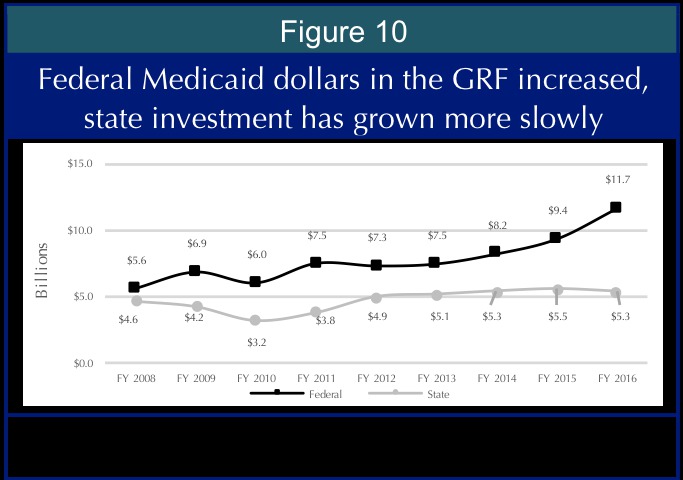 Non-Medicaid health and human service funding in the GRF has continued a long decline that started almost two decades ago. 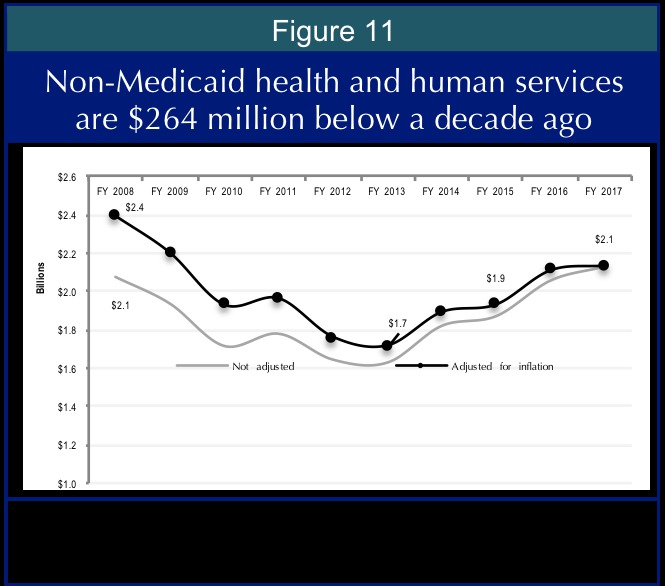 Local governments receive about $1 billion less in inflation-adjusted funds in 2017 than a decade earlier due to cuts in revenues sharing and state-imposed changes in revenue sources. 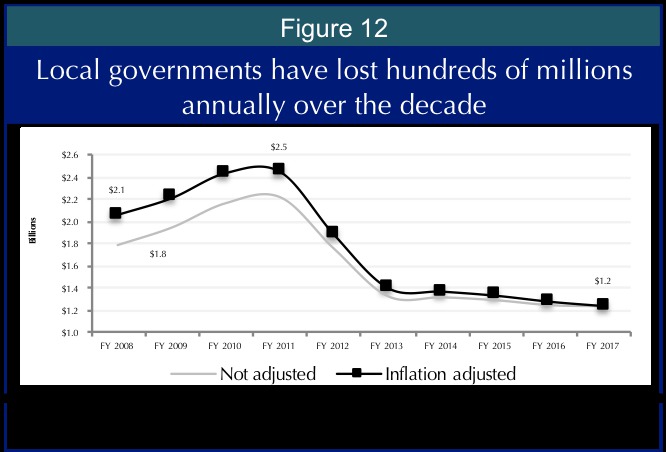 GRF funding for Public Transit peaked in 2000-2001 at about $40 million a year (not adjusted for inflation).[16] Since then, GRF funding for transit has trended downward, particularly in recent years. 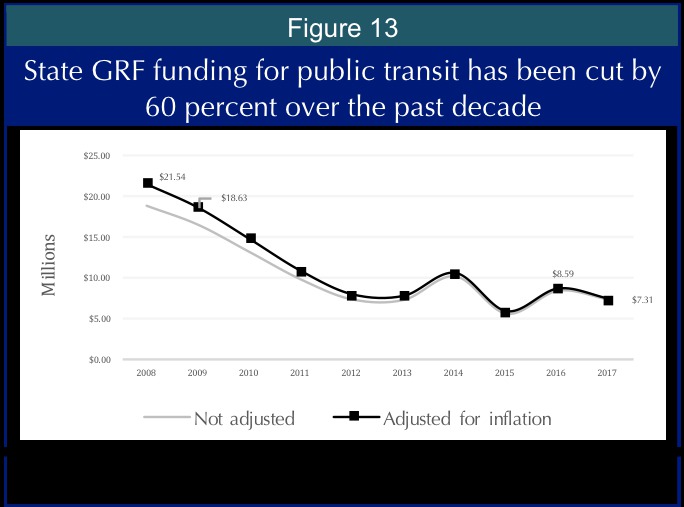 Corrections funding has fallen by $150 million over the past decade. 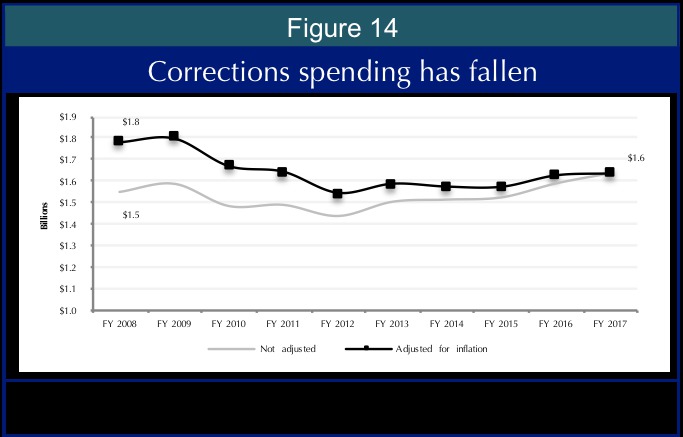 Where does the money come from: Revenue sources

In 2016, almost one-third of Ohio’s GRF revenues came from federal funds. The pie chart in Figure 15 includes the federal revenues in our budget. 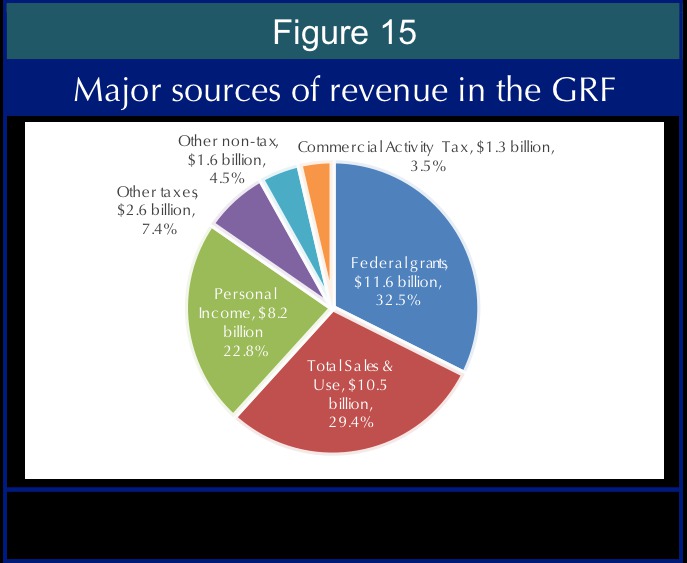 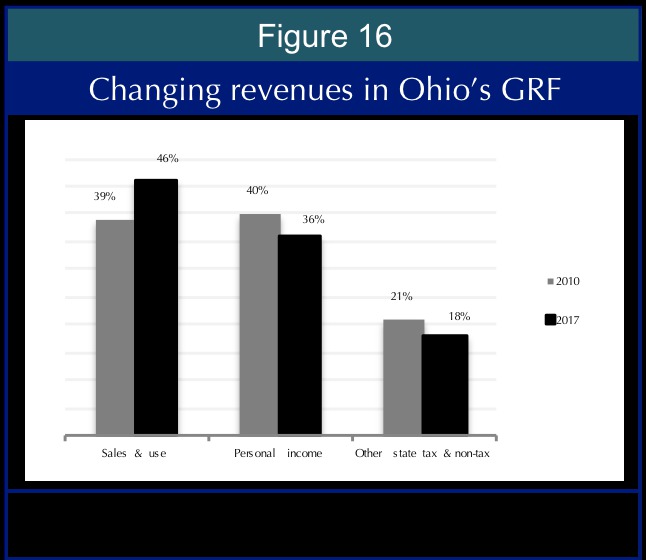 As state tax policy has changed, Ohio’s taxes are becoming more inequitable. Figure 17 shows state and local taxes as a share of income by income group.[22] 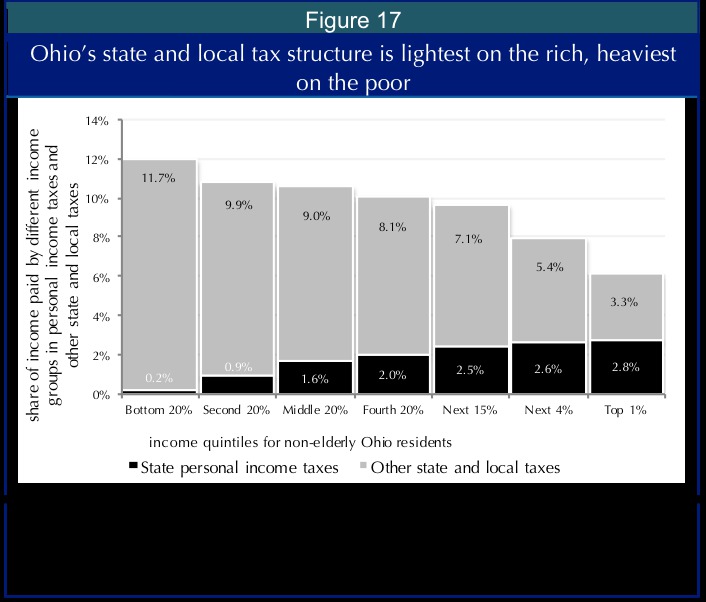 In the current budget, the General Assembly reduced personal income tax rates and expanded a tax break for business owners. Together, these changes will drain billions of dollars in revenue from the state system over the next few years. The legislature paid for these tax cuts in two ways: by using revenue the state expects to be generated from projected growth over the next two years, and by raising the cigarette tax and means-testing a couple of small income-tax credits.

The net result is a further shift in who pays Ohio’s taxes, so that each year affluent residents on average pay thousands of dollars less; middle-income Ohioans see tax cuts of about $20; and some of Ohio’s poorest residents pay an average of $20 more than they have in the past. Even those making between $58,000 and $89,000 would receive an average annual income-tax cut of just $65. 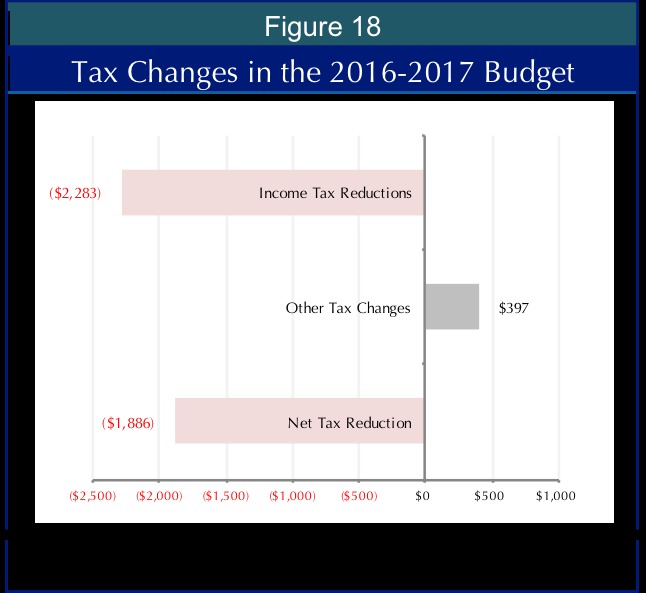 Ohio has been cutting income taxes since 2005. These and other changes have reduced revenue available to invest by more than $3 billion a year. 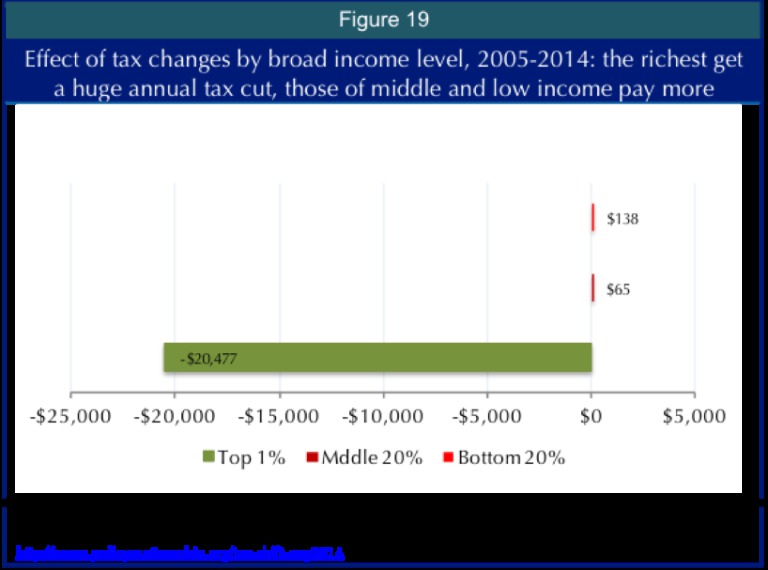 How does Ohio compare with other states? 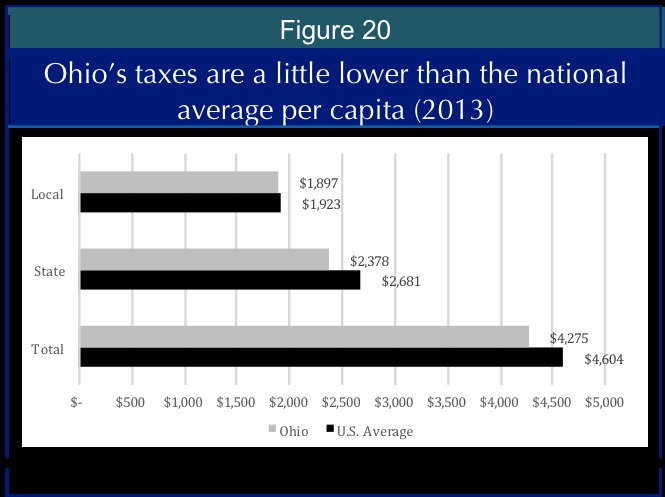 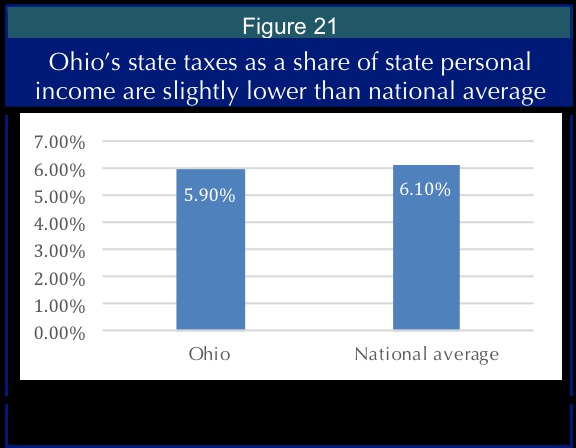 In some budget years, state legislators have demonstrated concern about inequity in Ohio’s state and local tax system. In the budget of 2014-15, legislators implemented an earned income tax credit, which reduces the weight of taxes on poor working families with children. Although the new state EITC was doubled in the course of that budget, it remains smaller than the national average; it is capped at earnings of $20,000 a year and it is not refundable, so it provides little benefit to many of the lowest-income Ohioans. Almost every other state with an EITC makes theirs refundable.

Spending through the tax code 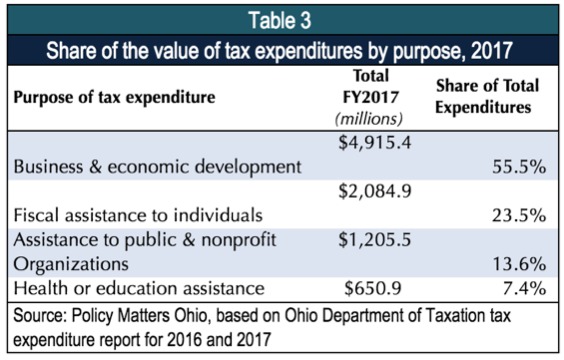 Ohio’s legislature has prioritized tax breaks and tax cuts. The claimed rationale has been that the tax cuts would generate job growth.

Tax cuts and tax breaks have been prioritized instead of investment and upkeep of critical public services. As a result, college tuition is too high. There are not enough pre-school slots for low-income children. Deep cuts in state aid to local governments has slowed recovery in many communities.

The budget for 2018-19 presents the opportunity to change policies and start rebuilding. Expanded public transportation can widen the labor pool for employers and lower costs for working families. Better funding for education — from more pre-school to college — can expand opportunity and boost competitiveness. Restoring local government funds can help communities slow the drug epidemic and restore blighted neighborhoods and property values. The state could afford to do this by eliminating tax breaks that lack economic merit, restoring top income-tax rates and modernizing tax policy to harness new and emerging sectors.

[1] Ohio’s general assembly passes a separate budget for transportation, for capital expenditures, for the Bureau of Workers Compensation and for the operating budget.

[2] Although Medicaid comes in second in state GRF funds, federal matching dollars make it the single largest expenditure in the all-funds budget, accounting for 37 percent of the total budget at $46.7 billion in FY 2016-17.

[5] Jennifer Smith Richards, “Drop in public pre-school is the biggest in the nation,” The Columbus Dispatch, April 11, 2012 at http://www.dispatch.com/content/stories/local/2012/04/11/drop-in-public-preschoolers-in-ohio-is-biggest-in-nation.html

[8] Ohio has among the largest gaps between what the state pays for infant care and the market rate, and state payment for toddler care and market rate. See appendix tables in National Women’s Law Center, Op.Cit.

[12] College Board, Tuition and fees by sector and state over time (Table 5) at https://trends.collegeboard.org/college-pricing/figures-tables/tuition-fees-sector-state-over-time

An overview of the budget process, what goes into it and how money is spent