Good afternoon Chairman Smith, ranking member Cera and members of the Committee. I am Jack Shaner, consultant to Policy Matters Ohio, a member of the Ohioans for Transportation Equity coalition. Thank you for the opportunity to testify. In our testimony, we encourage the General Assembly to restructure the Managed Care Organization (MCO) tax in a way that sustains counties and public transit, and to restore General Revenue Fund (GRF) support for public transit to earlier levels.

In 2015, the Governor’s Workgroup to Reduce Reliance on Public Assistance noted that lack of transportation was one of the major barriers to employment in the state of Ohio.[1] The Ohio Department of Transportation’s recent Transit Needs study[2] found that about half of transit riders have no car. The problem of transportation to work is particularly acute for people with serious vision problems or other disabilities.

Policy Matters is a member of Ohioans for Transportation Equity, a coalition representing seniors, people with disabilities, transit riders and many others. This coalition argues Ohio needs a 21st century transportation system that includes roads and highways but also includes public transit, passenger and freight rail, and walkable, bikeable streets. Funding that could make this possible has been eroded over time, and is further reduced by the end of this biennium.

As Ohio has reduced public transit funding in the General Revenue Fund since 2000, more than one-third of the fleet of transit vehicles has become obsolete, fares have gone up and service lines in many cities have been cut.[3] This hurts workers and employers, as new job growth and workforce location are not well matched in many places in Ohio. Of the nation’s 96 major metropolitan areas, Cleveland area had the largest decline in number of jobs located near the average resident between 2000 to 2012.[4]

The state could help more people access a ride to work. The Ohio Department of Transportation’s “Ohio Transit Needs” study found market demand for 37.5 million more rides than our system can deliver. The study found a $650 million gap between funding and the needs of Ohio’s 61 public transit entities in 2015, a gap which grows to $1 billion by 2025.[5] The study proposed Ohio start funding public transit at $120 million a year, a target that grows to $185 million a year by 2025. We support those recommendations.

But the governor’s budget lets public transit fall further behind during this biennium. Total funding proposed, between federal flex funds of the Ohio Department of Transportation budget (House Bill 26) and the House operating budget (House Bill 49), total $40 million a year. That’s a $10 million increase over 2017, but changes to the state sales tax base, upon which the large public transit agencies levy a local sales tax, offset the entire state transit budget by 2019.

The removal of the Medicaid Managed Care Organizations (MCOs) from the state sales tax base takes almost $40 million a year out of the system by 2019. While the governor’s budget provides transitional funding in fiscal year 2018 to mitigate this loss, this aid vanishes by fiscal year 2019.

Lawmakers can address this loss in the operating budget. The state restructured the Medicaid managed care organization tax to meet federal requirements and make itself whole, but left local public transit and counties out of the new structure. The new tax has been presented as a done deal because it meets federal approval, but legislators have not been given the opportunity to analyze how it might be configured to replace the old tax more completely. Rates of the proposed replacement tax could be adjusted to replace the local government share. An entirely different configuration - one that also meets federal requirements - might offer a better solution. We call for an open and transparent analysis and a replacement tax that holds public transit and counties harmless.

The General Assembly should also appropriate more GRF funding than the $7.3 million per year proposed in the governor’s budget. An additional $25 million in GRF funding could be used as matching funds to help rural transit agencies and those in smaller cities and towns match federal capital dollars to restore and expand their fleets and services.

Better funding for public transit could come from closing tax breaks in Ohio’s $9 billion tax expenditure budget. We attach a description of Governor Kasich’s recommendations from the current budget proposal, and also from his budget proposal for 2016-17. These tax breaks total far more than the $120 million we request for annual public transit funding.

Thank you for this opportunity to testify. I would be glad to answer questions. 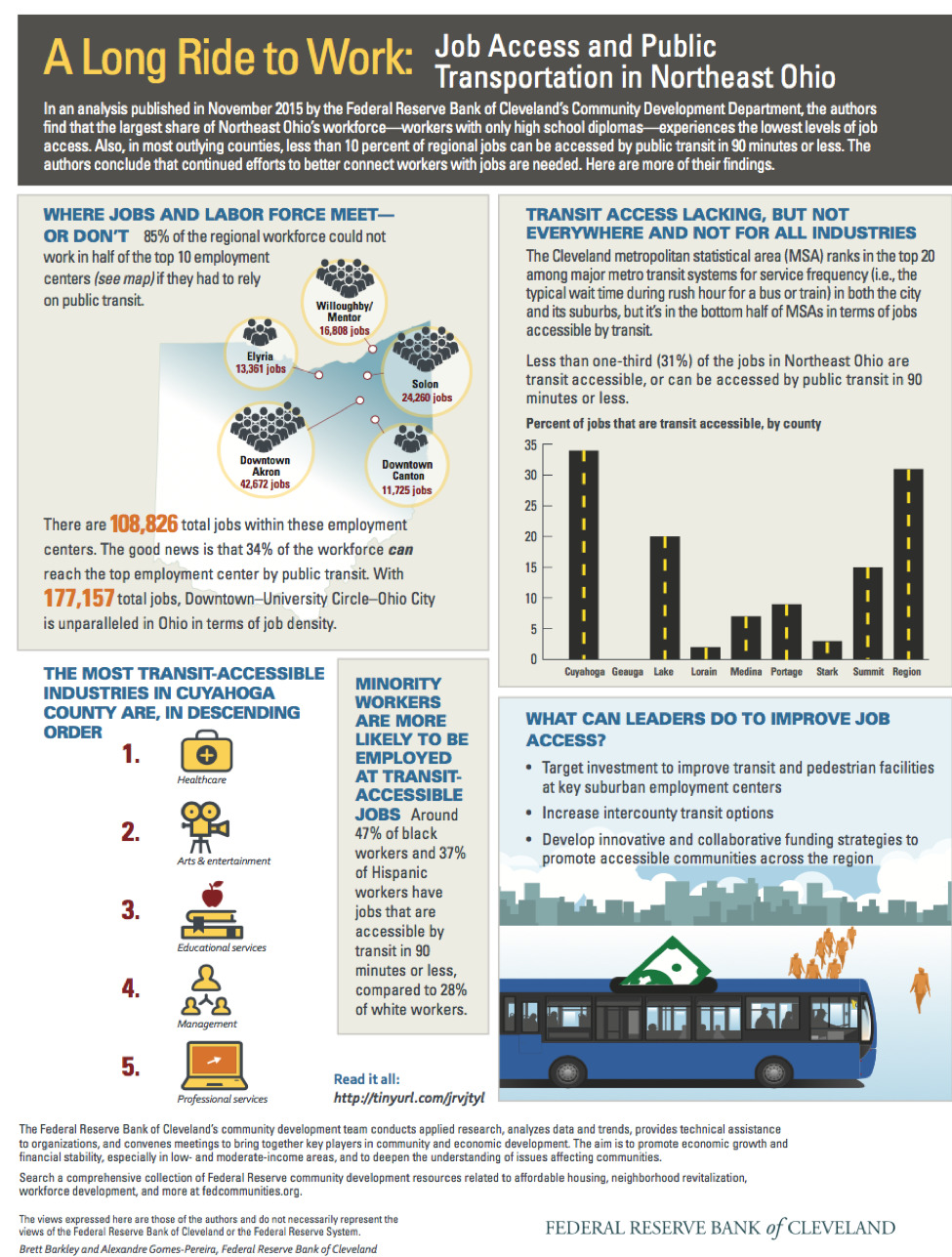 In the 2015 executive budget, Gov. Kasich proposed limiting or repealing a variety of tax breaks that were not accepted by the General Assembly. For instance, he proposed: [6]

These large sums reinforce the need to examine Ohio’s $9 billion-plus in annual tax breaks. HB 9 in the last General Assembly called for a joint committee to be established by this month to examine the state’s 129 tax breaks over an eight-year period. Lawmakers should get an early start.

Many tax expenditures are special-interest provisions that should be subject to immediate scrutiny and possible repeal or limitation. Beyond those mentioned above, these include:

These are just a handful of those that should be considered; many more deserve a careful look. Limiting these unneeded expenditures would allow the state to make needed investments.

[1] “When individuals are impacted by infrastructure limitations, such as jobs that do not pay a sustainable wage in their community or the inability to access reliable transportation to and from work, we need to collectively work to eliminate those barriers.” Cover letter to the report from the Governor’s Workgroup to Reduce Reliance on Public Assistance, April 15, 2015. http://humanservices.ohio.gov/PDF/041415-Report_FINALBOOK.stm

[4] This finding holds whether constricting the analysis to the city, suburbs, or entire metro and is even more pronounced in areas of high poverty (where the drop was 35 percent).

The state of public transit is nothing to celebrate
July 01, 2016

The state of public transit is nothing to celebrate
July 01, 2016