By Hannah Halbert and Ester Khaykin

Ohio has one state source for need-based financial aid – the Ohio College Opportunity Grant (OCOG). Lawmakers smartly increased OCOG funding, both in the last budget and in this one. In total, the Ohio budget increases need-based aid by about $12.9 million (6.9 percent) over the next two years. By 2019, Ohio will spend nearly $101 million on need-based aid.

In 2010, when the legislature replaced the Ohio Instructional Grant (OIG) and the OIG part-time grant with OCOG, the goal was to invest $250 million per year in aid. In 2008-09 we came close to the target by spending down the remaining OIG funds. The new budget moves in the right direction, but is about $150 million short, per year.

Need-based aid leaves too many without help 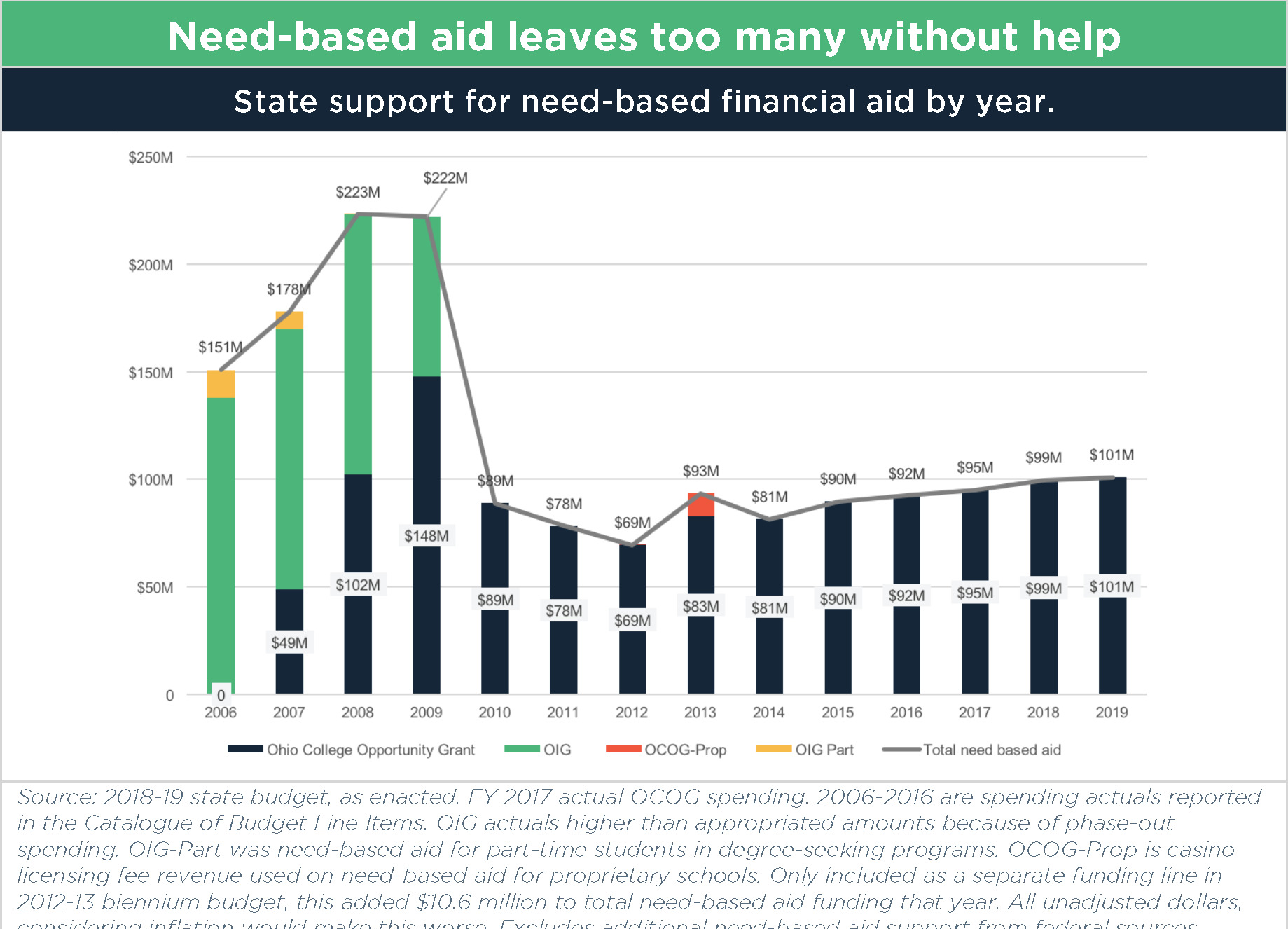 The legislature cut OCOG funding during the recession. Policymakers also changed how OCOG was awarded. The new rules required that OCOG function as a “last dollar” grant. That means other sources of aid, like Pell grants, must be applied to tuition and fees before determining the OCOG award. Because tuition and fees for two-year schools in Ohio are roughly equal to what the state calculates as the Pell award for the OCOG formula, students at these schools cannot use OCOG, even though they have unmet financial needs, including books, transportation, childcare or living expenses. Policymakers intended this change to “level the playing field” by shifting scarce OCOG dollars to students attending more expensive institutions. In reality, the change shifted dollars away from students who have the fewest resources to meet the full cost of attendance. An increasing number of community college and branch campus students cannot afford to attend without loans. Over half of first-time community college students took out loans by 2013, up 12 percent from 2009.

There are some exceptions to the rule. Foster youth at two-year public schools qualify for OCOG support, and, under certain conditions, students enrolled year-round at these institutions can access OCOG aid for summer tuition and fees. The new budget expands OCOG for veterans. GI Bill recipients can use OCOG awards for housing and living expenses, just like some foster care students. The state permits students with intellectual disabilities to receive OCOG for specialized workforce training programs. The new budget takes a step in the wrong direction, prioritizing students at private institutions over state schools by requiring awards for those schools be determined at twice the rate of awards for students at public schools. Incremental re-opening of need-based aid for these students will help, but much more is needed. The summer term OCOG extension allowed about $981,000 in OCOG awards to help 3,130 community college students taking classes last year. In 2015 only 65 students at these schools received help.

In this budget, policymakers earmarked more than $10.9 million in OCOG for proprietary schools. In 2016, $7.3 million in OCOG went to these for-profit schools. This funding provided awards to 10,157 students. For the same amount of OCOG spent at for-profits, public community colleges could have served more than 19,000 students. Lawmakers did not correct this disparity in the latest budget. Instead, the budget continues to steer financial aid away from the public system, even though public colleges leave students better off and are more accountable and transparent.

Ohio is overdue for change: Recommendations for real affordability

Ohio is facing an affordability crisis. Our two-year programs are some of the most expensive in the nation. Community colleges offer training programs connected to careers and are often the most accessible institutions for low-income and non-traditional learners. Ohio has ostensibly prioritized workforce development, but that isn’t evident in our financial aid investment.

Ohio can fix this problem. Closing the “passthrough” tax break on business income would make $1 billion available to support essentials like need-based aid, easily enough to fill the $150 million OCOG gap. Policymakers need to prioritize policies that help make the economy work for all people, not just the wealthy or well-connected. We have the money; we only need the legislative will.