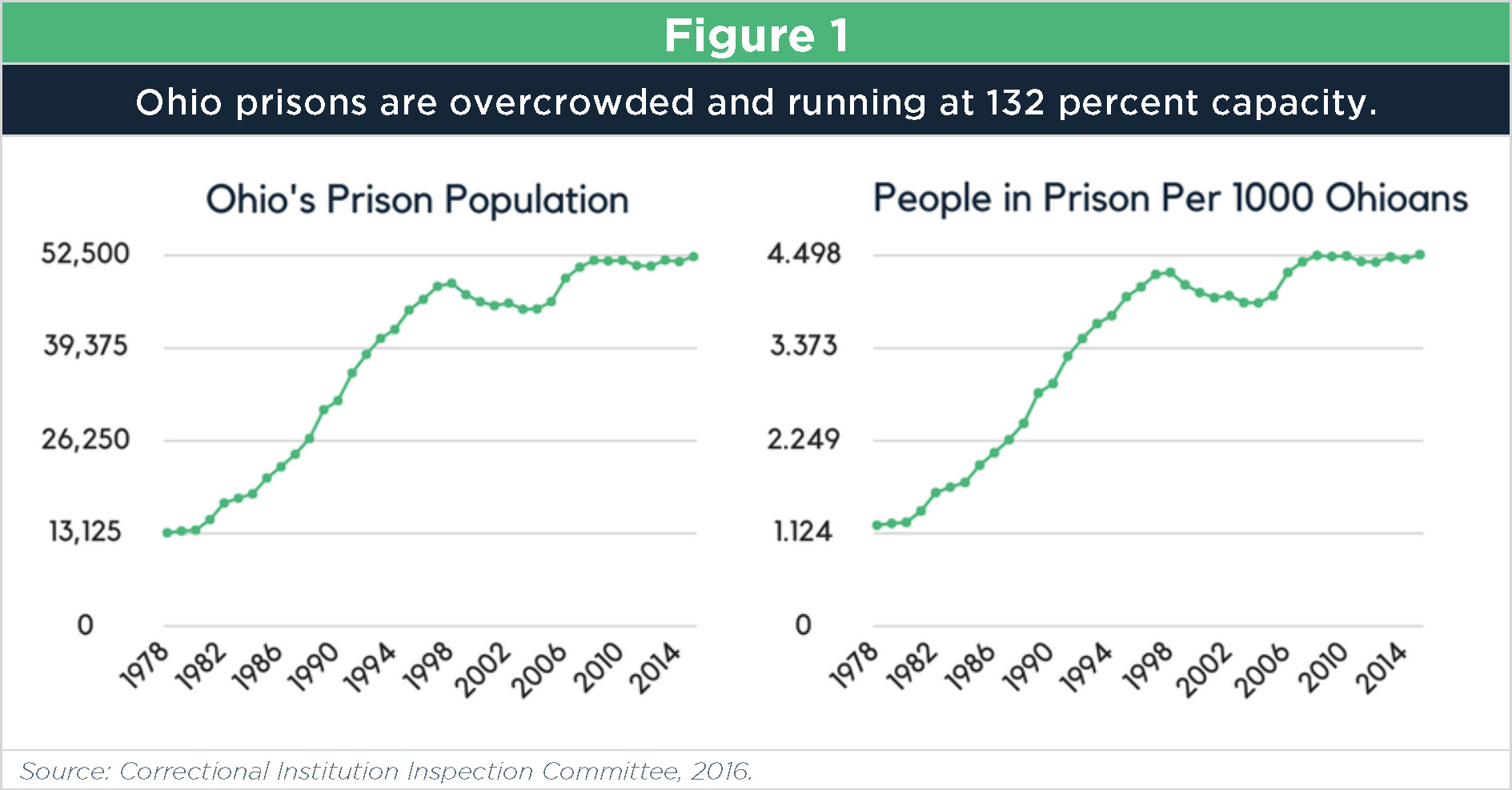 Incarceration rates have grown steadily over four decades while crime rates varied. Ohio’s high prison rates reflect a punitive understanding of what constitutes a crime, how we treat the accused, and even how robustly we preserve due process for the accused.

The Department of Rehabilitation and Corrections (DRC), which runs the state prison system, receives $1.82 billion in Fiscal Year 2018 and over $1.84 billion in 2019. That’s an increase of 8.2 percent over the 2016-2017 budget, not accounting for inflation. Most DRC funds are taxpayer dollars from the General Revenue Fund (GRF) of the state operating budget. Special and dedicated purpose funds and federal money make up the rest. DRC takes a bigger slice of General Revenue Funds in this budget; the entire GRF grows just 2.1 percent, but DRC gets a 7.2 percent increase from the GRF alone. This is partly restoration of funds that dwindled over the last decade, and partly new spending.

The 2018-2019 budget showcases smarter ways to approach criminal justice. Funding for community-based correctional services increases by 10 percent, to $54.9 million compared to the prior budget. Communities implement an array of programs including intensive supervision, day reporting, work release, community service, counseling, and electronic monitoring. Figure 2 shows state investment in community based corrections increased over each of the past three budgets, not adjusted for inflation. 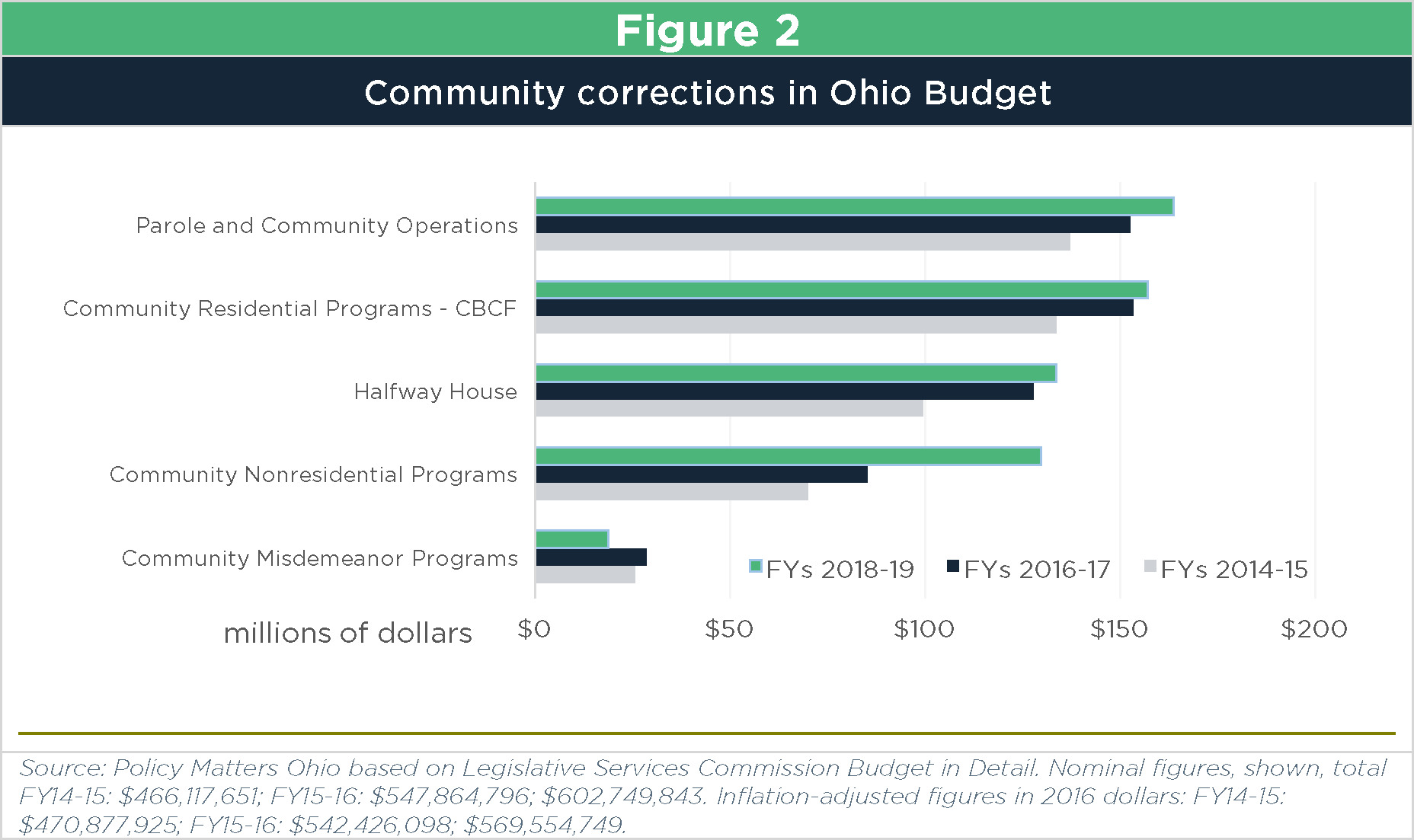 The budget bill changed the law to prohibit people convicted of fifth-degree felonies and sentenced to 12 months or less from being sent to prison, except violent and sex offenders. They may be sent to local jails, or could access programs like treatment and rehabilitation, that may help prevent re-offending. The DRC will transfer $23 to participating communities, instead of spending an average of $67.84 to incarcerate a person for a day. The Ohio Legislative Service Commission estimates the new law and budget earmark could prevent 3,400 Ohioans from serving time each year while keeping communities safe.

Ohio’s 2018-2019 budget makes increased investments in programs that treat mental health and combat addiction. The DRC budget contains $10 million in new funding for probation improvement and incentives, part of the legislative package to combat the drug epidemic, and $2 million for substance abuse treatment in state prisons. The budget also earmarks $2 million to prepare incarcerated people to reenter the workforce. Expanded use of Certificates of Qualification for Employment in the budget and separate legislation will reduce job barriers for formerly convicted people by increasing employer confidence in the certificate holder.

Correctional policy in the 2018-2019 budget reflects a growing understanding that we need to be smarter in how we spend criminal justice dollars, choosing programs that are less costly, more effective, and more preventive. This budget moves in the right direction, with more investment in community corrections, drug treatment and probation improvements. That’s good for communities and for the state’s bottom line. Ohio should continue to develop and deepen investments in mental health and addiction services. We must stop sending low level offenders to prisons, where they cannot contribute to their families, and their likelihood of committing subsequent and more serious crimes increases. Policymakers should also expand resources to reintegrate once-incarcerated people into the families and communities that need them.