Public education is the backbone of our communities and keeps our economy strong. It prepares children for higher education, the workforce, and civic life. Unfortunately, Ohio will continue to underfund K-12 education in the state budget for 2018-19 (all years are fiscal years). The minor funding increases in total state aid do not keep pace with inflation. The majority of districts are flat-funded or have their funding cut. Six districts lose more than a third of their funding.

For 2018-2019, state policymakers increased K-12 funding by only 2.7 percent over the last two-year budget. When adjusted for inflation, the state is actually investing less in aid for school districts than it did in 2016. 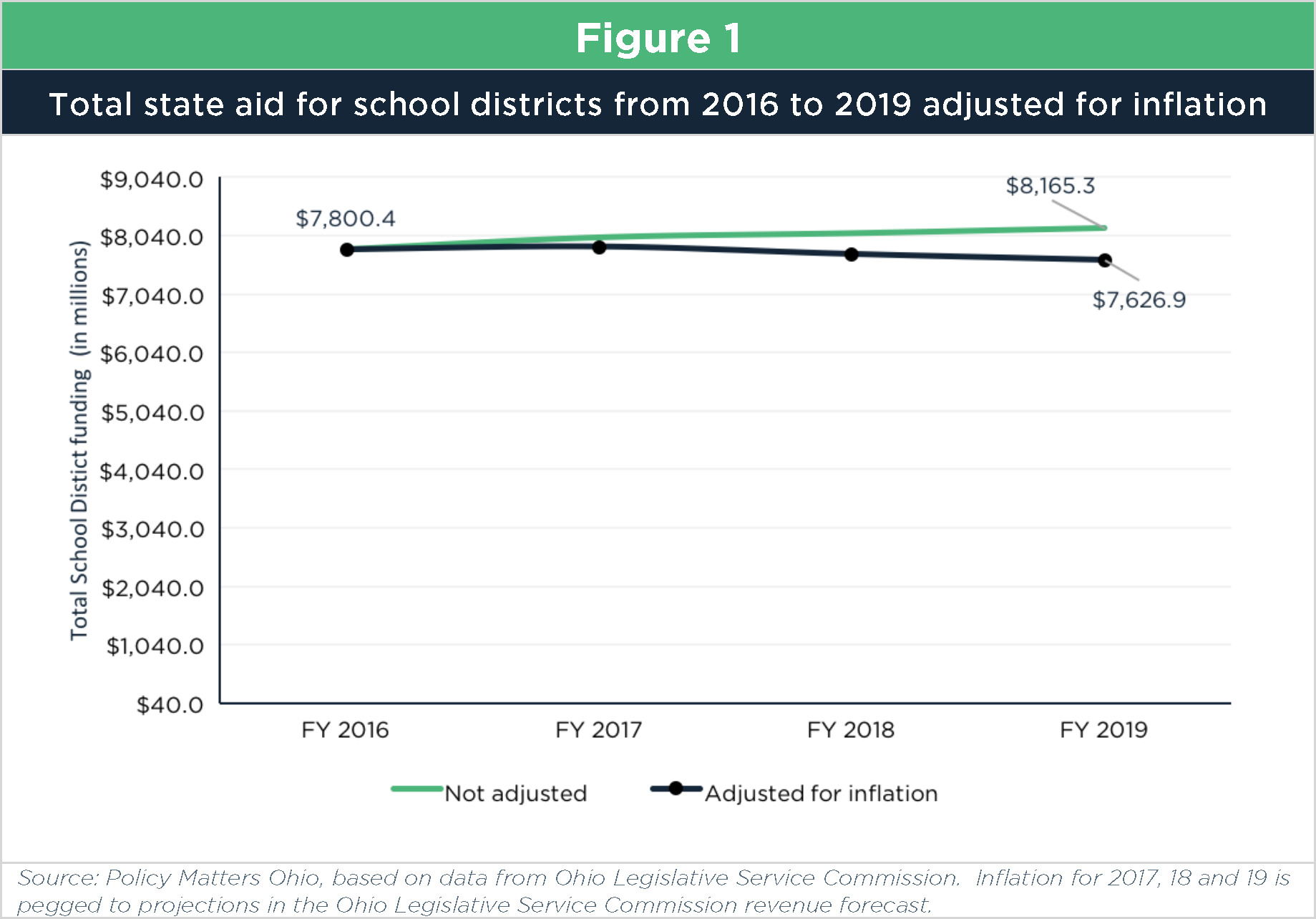 The inflation-adjusted decrease from 2017 to 2018 leaves many school districts flat-funded or further behind. Out of 610 school districts, 221 are flat funded and 147 lose funding. There are 242 school districts that gain between 0.1 percent to 5.9 percent in funding.[1] Since the recession, lawmakers have struggled to properly fund education. Instead of bolstering revenue to restore investment in schools, policymakers prioritized tax cuts for the wealthy and corporations.

Policymakers increased the formula’s base per-pupil payment amount from $6,000 to $6,010 in 2018 and $6,020 in 2019, but for most districts, that increase was offset by other changes, including changes to the cap, which limits growth in state funding for fast-growing districts, and changes to the guarantee, which slows loss for districts that are losing pupils. Policymakers lowered the cap from 7.5 percent in 2017 to between 3 to 6 percent depending on enrollment gains for 2018 and 2019. They reduced funding guarantees for districts that lost 5 percent or more of their enrollment from 2014 to 2016.

Other changes also drain money from schools. Lawmakers cut the state’s share of transportation costs from 50 percent in 2017 to 37.5 percent for 2018 and to 25 percent for 2019. This budget continues the phase-out of TPP reimbursements but slows the rate at which traditional school districts lose funding. TPP reimbursements total $207.3 million for 2018 and $165.2 million for 2019, down from $245 million in 2017.

School funding has been reduced over the past decade

The General Assembly’s funding for school districts has gone up and down over time, but over the past decade, cuts and inflation have reduced state aid to schools. Overall formula funding plus the remaining TPP reimbursements that go directly to school districts will fall by an estimated 8.1 percent between 2010 and 2019, adjusted for inflation. The number of pupils is also forecast to fall, but not as fast. The National Council on Educational Statistics predicts Ohio’s K-12 enrollment will fall by 4.4 percent between 2011 and 2023.

Schools needs robust funding to educate students and support their development. The state is shortchanging most districts and providing meager increases that don’t keep pace with inflation to others. Ohio needs to increase revenue so traditional public schools can be funded in a manner that reflects true cost of educating children and provides greater state aid for student in higher need areas. To boost funding for traditional public schools, policymakers should stop diverting funding for public schools to less effective charter schools and voucher for private school.

Cleveland School Vouchers: Where the Students Come From
September 20, 2001

Cleveland School Vouchers: Where the Students Come From
September 20, 2001