The new budget for fiscal years (FY) 2018-19 cuts state aid for local governments, again. Lawmakers narrowed the state sales tax base, eliminating a revenue stream of about $158 million a year for counties and $38 million for transit agencies. They redistributed a big chunk of the municipal component of the Local Government Fund to townships and tiny villages, and took the remainder for other uses. A new tax break for business will cause loss of municipal business tax collections, and some cities considering legal action against state plans to collect municipal business taxes.

Ohio’s local governments have $1.2 billion less in 2017 than in 2010 (adjusted for inflation) due to state cuts in revenue sharing, the phase-out of reimbursements for abolished local taxes, and the elimination of the estate tax taxes. Lawmakers continued the trend of hammering local government in House Bill 49, the budget bill for FY 2018-19.

In the new budget, the General Assembly took Medicaid managed care organization (MCO) services out of the sales tax base. Counties levy a sales tax on the state base and removing MCOs hit their collections hard: They lose an estimated $158 million a year. Public transit agencies that levy a sales tax lose an estimated $38.6 million a year. Lawmakers provided transitional funding to soften the blow. During the two-year budget period for FY 2018 and 2019, the state will provide $207 million to counties and impacted transit agencies. Negotiations conducted after the budget bill was enacted promise an additional $50 million, and possibly up to $30 million more at the end of FY 2018 if state revenues come in above estimates. But these measures do not fully replace the loss of MCO tax funds over the next two years. After 2019, the revenue stream is lost altogether (Chart 1).

The municipal distribution of the local government fund

The Ohio Municipal League points out that the new state budget redirects $35 million over the two-year budget period from the Local Government Fund to use in fighting the drug epidemic. With this sweep of funds, cities and villages lose the last of the municipal distribution of the Local Government Fund, which has gone to cities and villages with an income tax for more than 40 years (Chart 1). As important as fighting that is, the cuts to cities will hurt the front-line response to the epidemic; monies should be found elsewhere for this purpose. This change comes on top of the redirection of $24 million in municipal LGF dollars to townships and very small villages, started in the prior budget and written into permanent law in the 2018-19 budget. 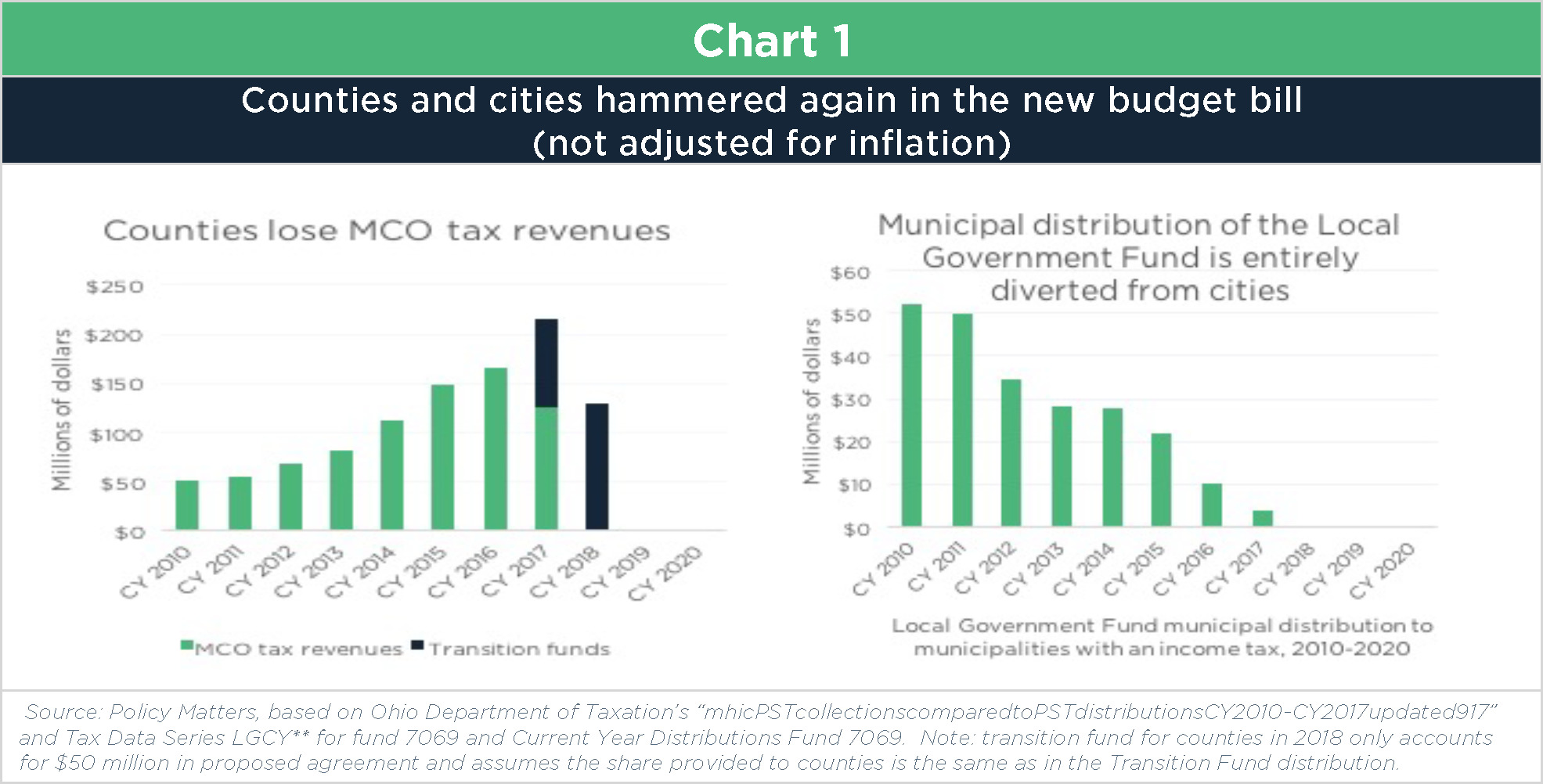 The new budget bill created a local business tax loophole sought by some lawmakers since 2013. It prohibits cities from taxing the profit a company makes when it ships a product or service outside the city where it is located to another place where it does not regularly solicit sales. Referred to as the ‘throwback rule,’ many cities fear significant losses. The Regional Income Tax Agency found 50 of the communities it serves would lose at least $50,000 a year, and conservatively estimated the loss across all those it services at $11 million annually. Columbus calculated a loss of $429,745 in 2013 from a survey of just 12 businesses.

The state will now collect the municipal income tax from firms that choose to file through the Ohio Department of Taxation instead of municipalities where they operate. While lawmakers cite advantages to businesses, municipalities argue it is costlier, weakens local oversight and enforcement, undermines uniformity of the tax system and will cause cash flow disruption. Some are considering a legal challenge.

Ohio’s cooperative partnership between state and local governments should be reconstructed. New sources, like casino revenues have not mitigated cuts to cities and counties. Some smaller rural counties have been shielded by policy and by rising sales tax revenues, but that shield is cracked by the removal of Medicaid managed care services from the sales tax base. This year’s cuts make it worse.

In the past six years, Ohio’s state lawmakers have prioritized cutting and eliminating taxes. State tax cuts have primarily helped the richest 1 percent of Ohioans. The state should reverse income tax cuts on the top 1 percent and use those funds to restore revenue sharing. In addition, they should identify and close uneconomical tax breaks and use the revenues to support public transit and help Ohio’s local governments repair roads and bridges, reopen recreation centers and swimming pools, ensure clean and lead-free water and improve the quality of life in communities across the state.

Testimony: State aid to local government is down
September 12, 2013

Testimony: State aid to local government is down
September 12, 2013