Lawmakers provide new funding in the 2018-19 Ohio budget so county protective service agencies, the caregivers of last resort for Ohio’s most vulnerable residents, can help the growing number of children affected by Ohio’s drug epidemic. They provide no new funding to provide adult protective services for the growing number of elderly Ohioans threatened by this public health crisis.

Ohio’s state funding for protective services is low compared to other states. The majority of protective service funding is from local levies and federal sources. As state lawmakers have cut revenue sharing and eliminated various local government tax sources, it’s been harder for agencies to deliver these services.

Ohio’s new budget bill boosts funding for the primary children’s services agency line item, 600523, by $41 million in the budget for 2018 and 2019, an increase of 36.8 percent over the prior, two-year budget. Additional funding was needed because in recent years funding dropped, even as needs grew, according to the Public Children’s Services Organization of Ohio (PCSAO), and shown in Figure 1. 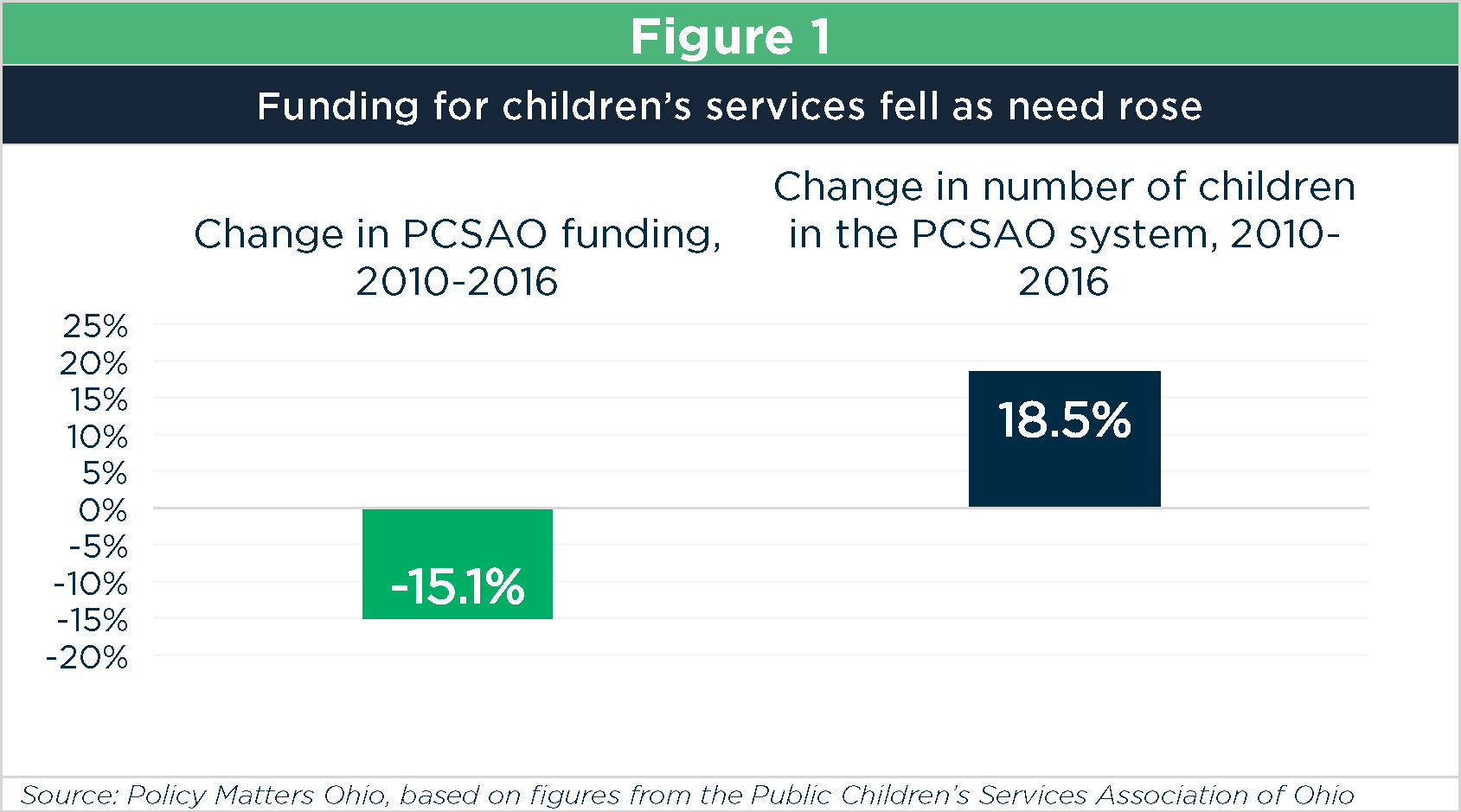 The additional funds in the 2018-19 will provide each county with $100,000 as a base before the remainder is divided by formula. This is a win for smaller counties, which may have more difficulty raising local funding through property tax levies.

A separate $15 million annual fund through the federal Temporary Aid to Needy Families (TANF) block grant will help “kin caregivers” – grandparents, aunts, older siblings - with the high cost of childcare for the children they take in. TANF funds are also used for a county crisis stabilization fund of $5 million a year for children engaged with multiple systems (the courts, children’s services, corrections, etc.); $600,000 is allocated over the biennium for court-appointed guardians for kids in crisis, and $300,000 for crisis care.

The overall budget of the Ohio Department of Aging expands in 2018-19, but there are no new funds for adult protective services. The Ohio Family Violence Prevention Project estimates that each year, 105,000 older adults (over 60) are abused or neglected in Ohio. The majority of these cases are never reported. Elder abuse is often called the silent epidemic, because many seniors, with limited resources and both physical and mental frailties, fear loss of needed social and financial support if they report mistreatment and ask for help. With the drug crisis, the number of reported cases is rising. According to the Columbus Dispatch, 16,196 reports of abuse, neglect and exploitation were made in the state fiscal year that ended June 30, 2016, an 8 percent increase over five years earlier. This is attributed to a notable rise in financial exploitation cases, largely because of addicted relatives.

In 2015, the state made a one-time investment in adult protective services of $10 million and boosted annual funding to about $2.6 million a year since then. Each county now gets $30,000 annually. The Ohio Adult Protective Services Coalition calls this inadequate. The Ohio Directors of County Job and Family Service Agencies asked for about $15.72 million a year, to support at least one full time caseworker in each county and the remainder by formula based on need and to ensure capacity to investigate elder abuse.

We applaud lawmakers for increasing funding for children’s services and kinship care for families afflicted by the drug epidemic. They should provide additional funding for adult protective services, especially as financial abuse is a growing problem. Policy Matters Ohio found a need for funding of between $11 and $30 million a year, depending on what estimate of abuse and neglect is used. The Ohio Directors of County Job and Family Services recommended $15.72 million a year. The Ohio Coalition on Adult Protective Services suggestions for $10 million a year. The amounts vary, but clearly, additional funding is needed to address the silent epidemic of elder abuse, which is made worse by the addiction ravaging so many Ohio families.