Public transit is a crucial service in Ohio, helping millions get to work, school, and important appointments, like doctors’ visits, every day. While Ohio’s ridership is the 14th highest in the country, the 2018-2019 budget continues to underfund transit. This budget is particularly bad; lawmakers cut a local tax that transit agencies need to maintain current levels of service.

Ohio’s 2018-2019 budget provides $39.5 million per year from state funds, which is about $80 million less than it should be, according to the Ohio Department of Transportation (ODOT)’s Statewide Transit Needs Study. The state’s contribution to public transit is made through a combination of federal and state funds. The federal funds come from the National Highway Trust Fund ‘flex’ dollars, which provide $33 million per year in the two-year budget. The General Revenue Fund (GRF), made up of state taxpayer dollars, provides $6.5 million.[1]

The 2018-2019 budget continues a trend of underinvestment in public transportation. Ohio’s contribution of $.63 per-capita currently ranks eighth lowest in the nation for transportation investment. Funding in Ohio is even lower than smaller states like Minnesota ($340 million a year) and Michigan ($200 million a year). Ohio’s Transit Needs Study from 2015 concluded the state needed to increase investment to $120 million a year in federal flex and state funds, and reach $185 million a year by 2025. The 2018-19 budget falls far short of the mark.

Losses in a pivotal funding source

Making Ohio’s chronic underfunding of public transit worse, the eight transit agencies that levy a sales tax face a collective loss of $38.6 million a year as state lawmakers narrow the state sales tax base in this budget bill. The services of Medicaid managed care organizations (MCOs) were previously taxed under the sales tax base, but the budget moves that to the insurance tax. The state overall suffered no loss from this change, but local transit agencies and specific counties lose a significant revenue stream. In 2016 alone, MCO tax revenue provided $38.6 million for Ohio transit agencies. Some counties are hurt worse than others; sales tax revenues from MCOs were distributed based on where Medicaid enrolees lived, so areas where low income people live, work and depend on public transit are hurt especially badly.

The 2018-19 budget includes a transition fund to help while localities decide how to cut services or replace lost revenues. The affected transit agencies with a sales tax get $34.4 million—not quite one year’s replacement—and pending legislation will likely appropriate a small amount of additional funding. But there is no permanent solution for the huge loss in agency budgets. In fact, the funding loss faced by just these eight agencies is nearly as large as the entire state appropriation for public transit for one year. 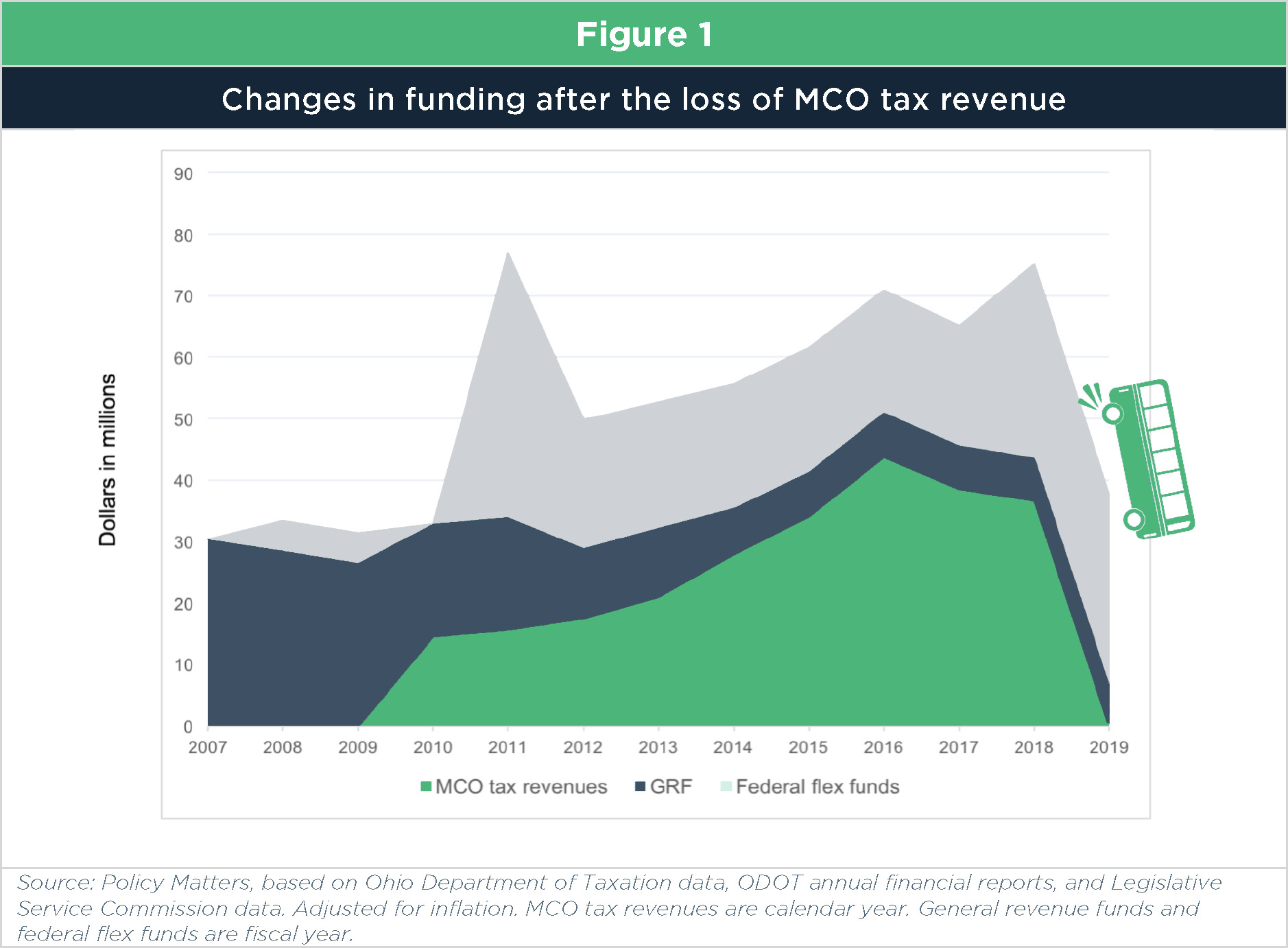 Ohio can support public transit by creating an ongoing, dedicated source of funds to replace the sales tax revenues that agencies have lost. Policy Matters Ohio has suggested legislators scrutinize the state’s $9 billion tax expenditure budget for uneconomical, unnecessary tax breaks to eliminate, with the revenues, used to backfill for the loss of MCO tax revenues.

The loss of the MCO tax revenues is an immediate, huge problem for Ohio’s transit agencies in many of its largest cities. However, the entire system of 61 urban and rural transit entities across the state is badly underfunded. Transit agencies serving small cities and rural places often struggle to garner the required local funds to match state or federal funds to upgrade equipment. The state needs to not only replace the loss of sales tax revenues for impacted agencies, but start funding public transit at the level recommended by the Statewide Transit Needs study: by investing $120 million through a combination of General Revenue Funds and highway flex funds now, and even more in the future, until fleets are upgraded and market demand is met.

[1] The state also appropriates another $33.2 million in federal formula funds for mass transit, but this is not a decision point for state legislators.