Good morning, Chairman Romanchuk, Ranking Member West and members of the committee. My name is Wendy Patton and I am a Senior Project Director with Policy Matters Ohio, a nonprofit, nonpartisan organization with the mission of creating a more prosperous, equitable, sustainable and inclusive Ohio. Thank you for the opportunity to testify.

We are glad that HB 166 continues support of the Medicaid expansion, the most important tool we have in stemming the drug epidemic and allowing hundreds of thousands of Ohioans to get needed doctor’s care. The ongoing investment in the health of Ohioans strengthens families and communities and the economy as well. Our analysis last year found the state has 54,000 more jobs due to Medicaid expansion funding, 90% of which comes from federal dollars that circulate throughout every county of Ohio.

The General Assembly has promoted work requirements for Medicaid, and such requirements are also required for federal food assistance and cash assistance. Workers in Ohio’s vast, low-wage economy increasingly need public services like Medicaid, child care assistance and food aid. In 2000, four out Ohio’s 10 largest job groups left a full-time worker with two children eligible for, and needing, SNAP food assistance to make ends meet. In 2017, it was six out of ten of the largest job groups.

Medicaid is a critically important work support. The majority of the Medicaid expansion enrollees contacted for last year’s program assessment pointed out that having health care helped them work and look for work. However other critically important work supports have yet to be addressed in Ohio’s budget. The state’s support for public transit in 2017, at $.63 per person, was lower than that of rural Montana. The $70 million for public transit to be funded in the Operating Budget is much needed. We thank you for that promise of funding: It’s a start in the right direction. Eligibility for public child care aid has dropped from 200% of poverty to just 130% of poverty, the second lowest in the nation. Although there is increased support for public child care assistance in the budget, it does not go far enough. Households earning up to 200% of poverty are eligible for and need help from Ohio’s food banks, but the legislature has allowed inflation to erode funding for these critically important lifelines for struggling Ohioans. The food banks’ request for increased funding in House Bill 166 is not included in the current legislation. The Housing Trust Fund has dwindled, which weakens supply of affordable housing; we do not yet see a new state investment to restore the Housing Trust Fund in House Bill 166.

Think of the state budget like your car’s engine. You can save money in the short term by skipping you oil changes – and your car will keep running for a while. Eventually, the engine will seize up and stop working. Fixing that will set you back far more than those oil changes would have. It’s time for us to make long overdue repairs to Ohio’s budget. We welcome the investment initiatives outlined in Governor DeWine’s budget. There is a cost to rebuilding neglected systems, but it’s well worth it. Investments allow us to grow and prosper as a state. Expanded public transit can broaden the work opportunities for individuals and the labor market for employers. Expanded child care aid can stabilize employment for workers and employers alike. There is a cost to rebuilding, but there is a greater long-term cost to delaying maintenance and allowing essential services to fall into disrepair.

We have heard the questions posed about sustainability of financing for the proposed investments in House Bill 166. This budget starts from an eroded base of services and revenues and grows only slightly: the total budget rises by just 3 percent, adjusted for inflation, over the next two years.

Investment in the state public childcare program provides a good example of what it takes to start to rebuild an eroded service. Publicly available data about the program reveals flat funding during a time of sharply rising need that has strained the infrastructure of the program, which is made up of private and non-profit childcare providers reimbursed through the state. 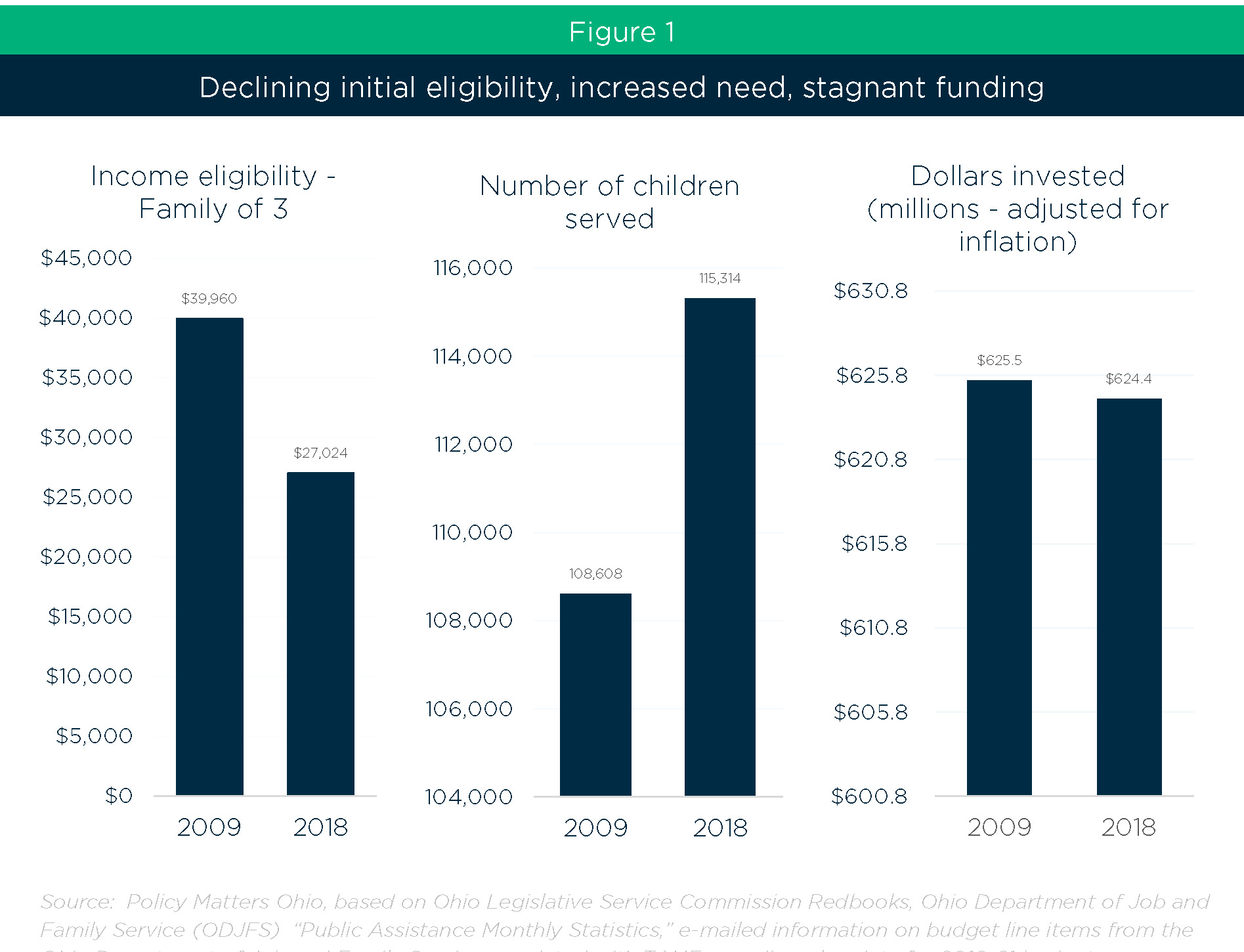 The number of children served has grown. The state program served 108,608 children in 2009, during the recession. As the economy recovered, more jobs became available, but many were low-wage jobs, which increased the need and demand for public child care assistance. In June of last year, the last month of FY2018 for which data on an unduplicated count of enrollment is available, 117,685 kids were enrolled. The income eligibility threshold for child care assistance dropped while the growth of low-wage jobs fueled demand for the service, leaving more families struggling to find safe, affordable places to care for their kids.

Funding remained flat on an inflation-adjusted basis. Ohio Department of Job and Family Services agency line items dedicated to supporting public child care assistance included 600617 (Child Care and Development Block Grant; 600689 (TANF) and 600535 (early care and education) and 600413 (state maintenance of effort). Together, these line items – adjusted for inflation in 2018 dollars - totaled about $625 million in 2009. In 2018 those four lines, plus a new one from a dedicated purpose funding source (600696), totaled $623.4 million. Even as demand for services soared, lawmakers held funding to about the rate of inflation.

Reimbursement rates for providers are inadequate. The Ohio Child Care and Development Plan for 2019-21 identifies the base provider rate for centers in Ohio's largest payment category (serving over 50% of children in Ohio’s public child care program) ranges between the 15th to 20th percentile of market rates. The recommended benchmark is the 75th percentile. Higher reimbursement rates are offered for child care centers that are accepted into the ‘Step Up To Quality’ program, but existing base market rates are so low some providers struggle to make the improvements necessary.

The new budget uses federal TANF dollars to boost to struggling providers and help them get into the quality program. This is necessary to strengthen the infrastructure of a program that faces strong demand. This up-front investment, included in the proposed budget for HB 166, is critical. But there is more to do. We are disappointed that HB 166 does not include new GRF funding to expand access to child care by increasing the level of initial eligibility to the Governor’s promise of 150% of poverty. Policy Matters Ohio like many others urges the General Assembly to restore initial eligibility for public child care assistance to 200% of poverty. This would make it fully aligned with the public preschool program, allowing thousands of children and families to take advantage of enrichment programs for early learners while supporting low-income working parents.

The important rebuilding we see initiated in this budget, and new investments necessary to improve systems, should be supported by predictable and sustainable state-based funding now and in the future. Over the past decade, lawmakers have prioritized tax cuts that have overwhelmingly benefitted the wealthiest at the expense of maintaining investment in essential services needed in the changing economy. By 2018, the wealthiest 1% of Ohioans paid almost $41,000 less in state taxes, on average, than they would have under Ohio’s tax laws of 2004, before all the tax cutting started. Those in the middle pay about the same. The lowest income taxpayers pay about $140 a year more, on average, because flat taxes, like the sales tax and the gas tax, have gone up. Today, the poorest pay almost twice the share of income in Ohio’s state and local taxes as the wealthiest.

We have often appeared before committees of the General Assembly, telling you that income-tax cuts are not the prescription for prosperity in Ohio. Almost 15 years of tax cuts have eliminated an estimated $6 billion in state revenues and further shifted the weight of state and local taxes from wealthy to middle- and lower-income families, but it has not boosted the economy. Ohio still lags the nation in job creation. The forecasts that underlie the proposals in HB 166 show that Ohio will continue to trail behind the United States in employment growth (see page B-4 of the governor’s proposal) and other indicators, including growth of personal income, gross domestic product and unemployment (see Ohio Legislative Service Commission forecast, pages 7-9).

We were pleased to see that this budget proposal largely does not include further income-tax reductions. Questions this committee has raised about sustainability of important proposals in House Bill 166, some of which are funded with one-time funds, underline that steps need to be taken to produce fair, balanced and sufficient revenues over time. The needs we highlight in this testimony, in human services, are in addition to the substantial investment needs of schools and higher education. We need to restore funding for local governments, which are responsible for the delivery and much of the financing of human services; they have lost more than a billion dollars a year since 2011 due to state cuts and elimination of local tax sources. Continuing to flat-line the state budget will not rebuild Ohio nor meet the growing needs of Ohioans in the low-wage economy.

Rebuilding takes a belief in Ohio’s future, and investment to build that future. We are glad that Governor DeWine has a vision for the future. He is right: it is time to invest, and it is a conservative strategy to invest, because the costs of delayed investment grow over time. We agree with him, and only regret that important investments that are badly needed are left out of the executive budget proposal.