Testimony on HB 166 before the Senate Finance Committee

Testimony on HB 166 before the Senate Finance Committee

Good morning, Chairman Dolan, Vice Chairman Burke, Ranking Member Sykes and members of the Committee. My name is Victoria Jackson and I am a researcher with Policy Matters Ohio, a nonprofit, nonpartisan organization with the mission of creating a more vibrant, equitable, sustainable and inclusive Ohio. Thank you for the opportunity to submit testimony. I am writing today to ask the committee to invest more in Ohio’s public colleges and in low-income students.

Higher education can help build a strong middle class by giving people the skills they need to secure good jobs. It can prepare students for the economy of the future so they can give back to their communities. Ohio has world class network of public colleges and universities. However, Ohio’s public colleges have high tuition and the state provides too little need-based financial aid. Ohio’s network of public colleges are ranked 45th least affordable for families of low and modest income.[1] and Ohioans owe $57 billion in student debt,[2] one of the highest per capita rates in the nation.[3] Policymakers set a college attainment goal of 65 percent by 2025. Only 44.6 percent of adults age 25-64 have a certificate or higher. Reaching this goal will require significant investment. Current funding levels and need-based aid policies are not enough to get us there.

Ohio won’t meet its college attainment goal without substantially increasing investment in higher education. But the investment trend is headed in the wrong direction. According to the Center on Budget and Policy Priorities, the state’s per-pupil spending was 18.1 percent lower in 2018 than in 2008, adjusted for inflation, a bigger decline in higher education investment than 23 other states.[4] The high cost of Ohio’s public colleges and universities will not come down unless the state restores its share of the cost of classroom instruction. The budget passed by the House only increases SSI by 1.1 percent and 1 percent for fiscal years 2020 and 2021 for Ohio’s 14 public universities, 24 regional branch campuses, and 23 community colleges. Over the next two budget years, SSI would increase by just $41.8 million, or 2.12 percent, far less than the projected inflation of 4.2 percent. adjusted for inflation, funding in FY 2021 would be less than FY 2006.[5] SSI should be increased 5 percent each fiscal year so colleges can keep tuition cost steady without sacrificing quality. Additionally, SSI should be indexed to inflation to ensure the quality of Ohio’s higher education system does not decline over time.

We are pleased to see the budget passed by the House increases OCOG by 18.2 percent for fiscal year 2020 and 21.8 percent for 2021, which would bring OCOG to $145.2 million by the end of the biennium. The governor’s proposal included $3 million a year to OCOG for textbooks and instructional materials for students at community colleges and regional campuses.[6] The House proposal moves this money out of OCOG and into a separate Textbooks and Instructional Materials Fund. This funding should be moved back to OCOG to strengthen the grant by helping low-income student pay for the actual cost of attending college. These are important steps in the right direction, but they are not enough to bring OCOG back to pre-recession levels. In 2021, funding for OCOG would be $77.8 million less than in 2008, not considering inflation.

Generally, OCOG is for Ohio residents who attend an Ohio college. To be eligible, a student must have an Expected Family Contribution of $2,190 or less, as determined by the Free Application for Federal Student Aid (FAFSA).[7] Maximum OCOG awards are based on a student’s type of school and enrollment status (see Table 1). 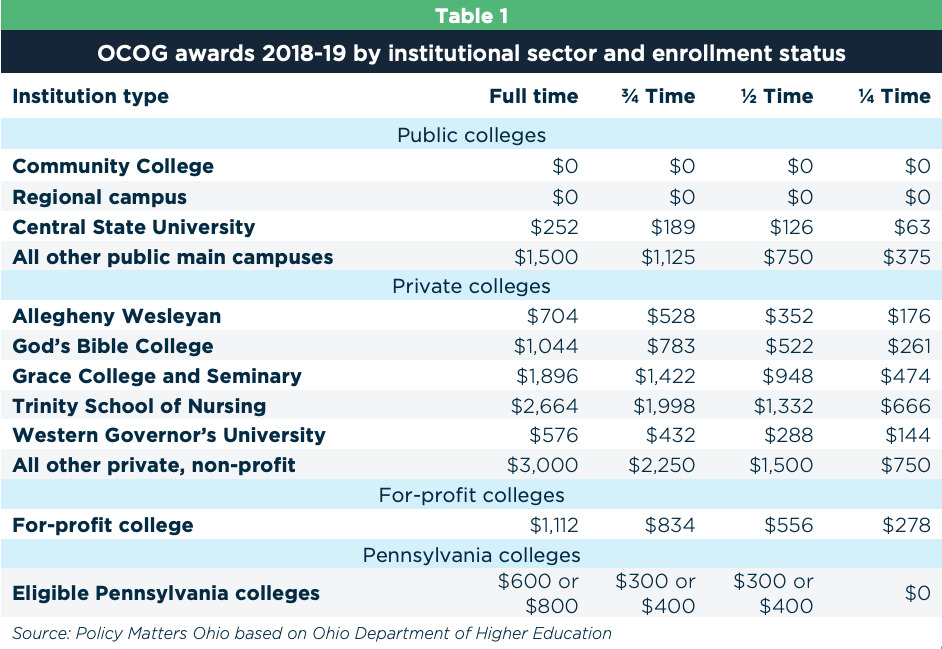 As shown in Table 1, community and regional campus students do not receive OCOG grants even if they qualify financially. Although Central State is a public university, the maximum grant available for Central students is only $252 - $1,248 less than all other public main campus university students. Because these institutions have lower tuition rates than other public institutions their students receive less OCOG. Ohio’s flawed OCOG policy creates this discrepancy. OCOG is a “last-dollar” grant for tuition and general fees only. This means other aid, like Pell Grants, must be applied to tuition and fees before OCOG awards are determined. The state of Ohio defines cost of attendance as tuition and general fees only, but colleges and the federal government define costs of attendance as tuition, books, transportation, and basic living expenses such as housing, food, toiletries, and other education expenses.[8] Ohio policy should account for the actual cost of college attendance. OCOG awards are determined by a formula: (average tuition and general fees charged by an institutional sector) – (the Pell grant maximum for the academic year)[9] = fixed number, which is capped at the appropriate maximum award. Awards can vary by college.

In general, too many students attend institutions ineligible for full state need-based aid. Regardless of the intent of OCOG policy, the outcome is a greater share of black and Latino[12] students are excluded from full OCOG awards than white students. Of Ohio resident undergraduates, 60.7 percent of black students and 51.6 percent of Latino students attending public institutions are at colleges not eligible for OCOG or for significantly less OCOG compared to 47.8 percent of white students.[13] This is concerning because of college costs are a bigger burden on black and Latino families.[14] Past and present policies and lending practices keep African-American families from building wealth. Structural racism in employment leads to higher unemployment and lower median wages for people of color.[15] In Ohio, the median hourly wage for black workers is just $13.96 compared to $18.75 for white workers – this equates to more than $9,000 with full-time, year-round work.[16]

Many college students struggle to afford the basics

Students in Ohio are experiencing hunger and colleges are responding. The majority of Ohio’s 61 public college have food pantries. Some of these pantries also provide other necessities like hygiene products, winter clothes, and household necessities like toilet paper. The establishment of pantries on campus is an indication that students need help with living expenses. Most Ohio college students balance a job on top of their academic demands (see Table 2).

Working more than 20 hours per week harms academic performance and reduces a student’s likelihood of graduating.[19] Also, hunger is higher among students who work longer hours.[20] If students can use OCOG to pay for living expenses they will better be able to focus on the task at hand: getting an education.

Ohio’s insufficient support for higher education does not align with the state’s 65% attainment goal. High tuition deters students from pursuing a degree or credential. It makes it difficult for students attending public colleges in Ohio, especially low-income students to complete their degrees. The state can raise the revenue to invest in higher education by reversing tax cuts for the wealthiest and closing unproductive tax loopholes. At a minimum, state policymakers should consider funding higher education at an additional 5% per fiscal year and indexing SSI to inflation. Getting a post-secondary degree is not only good for students, the benefits spill out to our communities and across the state. Ohio’s budget should reflect this and make public colleges and universities a priority.

The proposed $44.3 million increase over the biennium is a marked improvement but more is needed for OCOG to meet the needs of all Ohio students, whether attending a community college, historically black university or regional campus. Deep investment in OCOG and better policies can make the grant more effective. We recommend four changes to improve equity and make the program meet the needs of Ohio’s growing college population.

How to improve equity

Ohio built a world-class system of public colleges and universities, and created financial aid programs to help a previous generation attend. College has becomes increasingly essential for securing jobs that pay a family-sustaining wage and for making sure working people have the skills to succeed in today’s economy. It is essential that we help today’s young people afford college to build a better future for all of us.

Thank you for the opportunity to testify.

Center on Budget and Policy Priorities, October 4, 2018 at https://bit.ly/2DZfTny

[12] The Census category “Hispanic” refers to people with ancestral roots in Spanish-speaking countries. Latino refers to people with ancestral roots in Latin America, which can be slightly different (Spain is Spanish speaking but Spanish people are not Latino, Brazilians speak Portuguese but are Latino). Many activists now use Latinx because Latino refers to men and Latina refers to women while Latinx captures all gender identities. We use Latino here because it is more widely understood.