Good morning, Chairman Smith, Ranking Member Cera and members of the committee. My name is Zach Schiller and I am research director at Policy Matters Ohio, a nonprofit, nonpartisan organization with the mission of creating a more prosperous, equitable, sustainable and inclusive Ohio. Thank you for the opportunity to testify. For more than a decade, Ohio lawmakers have focused on income tax cuts that overwhelmingly benefit the wealthiest at the expense of adequate investment in communities and people. We start our testimony with a list of critical investments that would benefit all. This list is farfromcomplete,butprovides an overview of needs that could and should be addressed in a state budget. 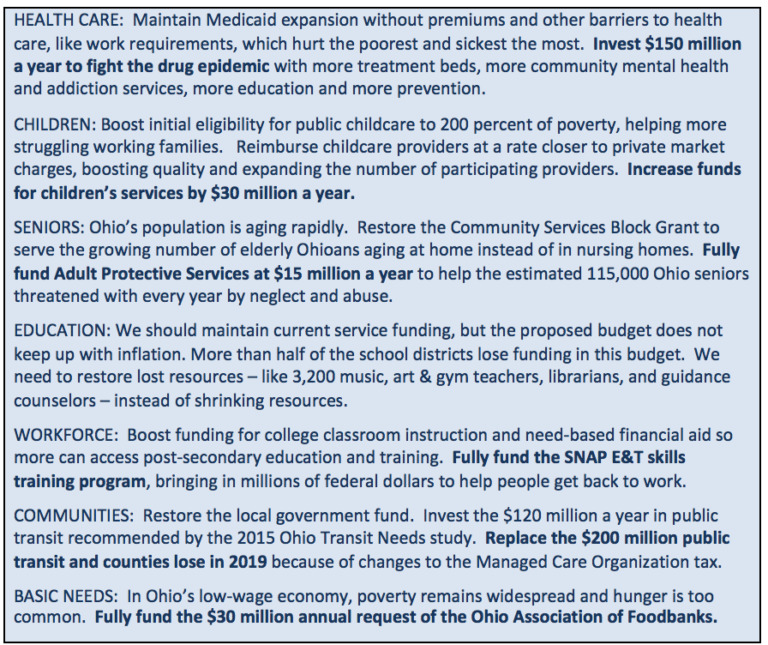 In 2015, we appeared before this committee and said: More income-tax cuts are not the prescription for prosperity in Ohio. A decade of tax cuts has further shifted the weight of state and local taxes from the rich to middle and lower-income families, but it has not boosted the economy. Ohio still lags the nation in job creation. This time, nearly all of the income-tax cuts Governor Kasich has proposed would be offset by tax increases. Instead of such tax shifting, we encourage you to make needed investments in Ohio’s people and communities.

College in Ohio remains unaffordable. Nationally, Ohio is ranked 45th highest in college costs with community colleges and public universities costing 11.5 percent and 14.5 percent more than the national average, respectively.[1] We remain $150 million a year below the target for need-based college financial aid set under Governor Taft’s administration. Our ranking among states in overall health indicators is near the bottom,[2] but today we rank near the top for deaths due to the drug epidemic.[3] That scourge has swollen the caseload of children’s services, yet Ohio remains last among the states in funding this critically important public service.[4] Investment in children remains inadequate for childcare and early education[5]. Just 5 percent of four-year-olds from low-income families are in public pre-school, while nationally, 29 percent are enrolled. Our infant mortality rate is high and rising.[6]

The state has cut $1 billion from local governments in Ohio since 2011, through eliminationof tax authority and phase-out of tax reimbursements and revenue sharing. That figure includes revenues from casino taxes, motor fuel taxes and auto licenses and registration.[7] Starting in 2019, HB 49 takes another $200 million from local government as the state changes the Medicaid Managed Care provider tax (MCO tax) by taking it out of the sales tax base, without restoring funding for the counties and transit agencies that piggybacked a local sales tax on the state base.[8] Ohio is not close to meeting the targets outlined in the state’s study of transit needs.

We are overdue for investment in communities, opportunities for children and infrastructure needed by businesses and individuals alike.

While there are a number of positive elements in Gov. Kasich’s tax proposal, such as raising the severance tax and cutting some unnecessary tax breaks, further slashing income taxes is not in Ohio’s interest. Income-tax cuts are unlikely to result in accelerated job creation. We have not seen greater job gains after previous Ohio income tax cuts and there is no reason to expect a different result this time.

Governor Kasich’s tax proposal would further reinforce the shift in Ohio’s state and local tax system in favor of affluent residents and against those with lower or middle incomes. Table 1 below shows the key findings of an analysis done for Policy Matters Ohio by the Institute on Taxation and Economic Policy (ITEP), a Washington, D.C.-based research group with a sophisticated model of the tax system. While on average taxpayers in the bottom 60 percent of the income distribution would pay more, those in the top 1 percent, who made more than $457,000 last year, would receive an annual tax cut worth more than $2,000.

Overall, Ohio has reduced taxes by $3 billion a year through income-tax and other reductions since 2005. This has not resulted in the predicted growth in jobs. The forecast used in developing the Kasich administration budget proposal, from IHS, shows that Ohio will trail behind the United States in output, personal income, nonfarm employment, unemployment rate and retail and food service sales during the next budget (see page B-4 of the governor’s proposal). Last calendar year was the worst job-creation year for Ohio since 2009.Reducing the number of brackets in the income tax is a solution in search of a problem. It will do little to simplify the tax system: Most taxpayers can simply find their rate in a table. Moreover, the number of brackets in the income tax is not linked to economic performance. Does anyone believe there are fewer successful start-up businesses in California because its state income tax has 10 brackets, more than the nine in Ohio?

Nor has the new tax break for business owners, which eliminates the income tax on the first $250,000 in income for owners of passthrough entities like partnerships and S Corporations, led to an increase in new jobs at new small businesses. Ohio legislators should realize what a bipartisan majority of the Kansas legislature has concluded: That such tax breaks don’t work, and need to be repealed. Moreover, because of the existing Ohio business-income deduction, Governor Kasich’s proposed reductions in income-tax brackets and rates won’t affect what owners pay on their business profits. This makes it even more difficult to claim that they somehow will create jobs and economic growth.

There are some positive elements in the administration’s tax proposals. The budget bill appropriately recognizes that it is past time for us to raise the severance tax on oil and gas drilling to be more in line with other producing states. It also takes a step toward broadening the sales-tax base, a needed move when services make up such a large part of our economy. And it takes limited measures to rein in unneeded tax expenditures, such as the large tax break for big distribution centers, special discounts for paying taxes ahead of time, and to ensure that companies do not avoid tax altogether on their interest earnings.

However, the General Assembly needs to go further. Governor Kasich’s proposal, which commendably would add new transparency for seven business incentive tax credits, estimates that a total of $1.5 billion of them will be outstanding by the end of Fiscal 2019. This is a large sum. It underlines the need to examine these credits and all of Ohio’s $9 billion-plus in annual tax breaks, and get an early start on the review mandated by House Bill 9 from last session. A number of them are special-interest provisions that should be subject to immediate scrutiny and possible repeal or limitation. This would allow the state to make needed investments.

The General Assembly took positive steps in creating a state Earned Income Tax Credit (EITC) and raising it to 10 percent of the federal credit. The federal EITC helped lift 265,000 Ohio families out of poverty last year. However, the state EITC could be a much more powerful tool for helping working families make ends meet and provide for their children. Because of limits imposed on its value, just 8 percent of the poorest workers—those earning $21,000 or less—see any benefit from the credit and the benefit is modest. Unlike the federal credit, Ohio’s EITC cannot exceed what a taxpayer owes in income taxes, and for a taxpayer with income over $20,000, it cannot exceed more than half of what he or she owes in income taxes. That means that it does nothing to reduce the substantial share of income these same taxpayers pay in sales taxes and property taxes. If the General Assembly removed these limitations, the state EITC would reach far more of the workers who need it most and be a better-targeted income support.

Ohio has the money to generate the resources we need. Beyond the tax loopholes that should be closed, we are losing $3 billion a year in revenue to tax cuts since 2005, much of which has gone to affluent Ohioans. The passthrough business-income deduction alone is costing more than half a billion dollars a year. We need a different approach to tax policy in Ohio to make needed investments.

As a state, we need to stop starving college need-based financial aid and classroom instruction so more Ohioans can get post-secondary education. We need to fund childcare to help more families, and at rates that are high enough to ensure a higher quality of care than we are paying for now. More kids should be in preschool, and we need full-day kindergarten, if we want our youngsters reading by third grade. This takes a belief in Ohio’s future, and investment to build that future. We need sufficient funding for children’s services and adult protective services. Our school districts should be held harmless from the erosion of inflation and funding should be provided to restore art teachers and librarians. We need to restore funding for local government and replace the Managed Care Organization tax in a way that holds counties and public transit harmless. Deferred investment leads to higher costs over time. It’s past time to make these investments.

[1] The Institute for Research on Higher Education, 2016 Diagnosis for College Affordability: Ohio, at http://www.gse.upenn.edu/pdf/irhe/affordability_diagnosis/Ohio_Affordability2016.pdf

[3] Centers for Disease Control and Prevention, Drug Overdose Data for 2015 at https://www.cdc.gov/drugoverdose/data/statedeaths.html