The Ohio Senate budget bill which is being considered by conference committee would create or expand a dozen tax breaks that could cost the state and local governments — including townships and municipalities, libraries, counties and transit agencies — up to nearly half a billion dollars over the next two years. Meanwhile, it would eliminate the legislative committee that is supposed to review all tax breaks. The combination would add special-interest giveaways even while it removes a mechanism that could provide a measure of accountability to Ohio’s $9 billion-plus in annual tax credits, exemptions and deductions.

The conference committee, which began meeting this week, will choose which provisions of the budget bills passed by the House and Senate to put in the final version. It should scrap the new and expanded exemptions and credits in both bills. But it’s the Senate bill that especially expands exemptions and credits.

So far, the Senate’s proposed tax breaks and elimination of the review committee have received less public attention than the $874 million income-tax rate cut it proposed,[1] or the changes it would make to municipal tax collection that would badly harm cities and villages.[2] But like those changes, the increased tax breaks and potential loss of the review committee would also set Ohio back.

The Tax Expenditure Review Committee (TERC), created as a result of unanimous votes in both houses of the General Assembly in 2016, is charged with going over the 138 tax exemptions,[3] credits and deductions that add up to more than $9 billion a year. It hasn’t done its job, compiling a weak review[4] of 15 sales-tax exemptions in 2018 and not meeting since.

But instead of scrapping this tool, legislators should use it, strengthen it, and provide it with resources[5] to do serious analysis[6] like that done in a number of other states. This committee is clearly needed as evidenced by the plethora of expanded tax breaks included in the Senate budget bill approved last week.

The largest among the new or expanded breaks is a new sales-tax exemption for users of temp firms, whose business model often pays workers inadequate wages.[7] When Policy Matters was able to obtain data, temp firms always showed up among those whose employees were most likely to depend on public benefits such as food aid; a recent study[8] by the U.S. Government Accountability Office found once again that that was true in most of the states it surveyed. Policymakers should not promote this business model with a costly giveaway — and costly it is indeed. Altogether, the Legislative Service Commission found that this tax break would cost the state $231 million over the biennium, while local governments, libraries and transit agencies would lose another $72 million. (Municipalities, townships and libraries would lose state funding, while counties and transit agencies would lose sales-tax revenue.)

The Senate also would bring back the sales tax exemption for investment coins and metal bullion, already repealed twice before, first after the Tom Noe scandal in 2005 and then again, after it was reinstated, in the 2019 budget bill. Former Governor John Kasich, in vetoing one earlier attempt to reinstate this exemption, put it well: “The sales tax is intended to be a broad-based tax, regardless of whether or not the purchasers believe or hope that the items they buy will increase in value. There is no reason to provide preferential treatment to one class of items and not others that could possibly increase in value, such as art, sports cards, or antiques.”[9]

While Senators say they cannot afford the Fair School Funding Plan for public schools, they add new tax incentives for private education that the Department of Taxation estimates could total up to nearly $150 million over the biennium. This is in addition to the $163.5 million in direct budgetary spending for an expansion of vouchers for private school tuition, among other forms of expanded support. Such funds should instead go toward finally overhauling our unconstitutional school funding formula with the broadly supported, carefully crafted Fair School Funding Plan.[10]

The three new education tax credits in the bill would allow taxpayers to write off home schooling expenses, pay for private-school tuition and to make cash donations of up to $1,000 to certain scholarship-granting organizations for K-12 students. The cost of the largest of the three, cash donations to scholarship-granting organizations, is uncertain, but could range up to $70 million[11] a year, the Department of Taxation has estimated. If enacted, the new credit is not so much a way to get individuals to donate their own money as it is a diversion of state dollars to private schools. The subsidy is far more generous than what taxpayers would receive on a $1,000 donation to support a charitable cause.

While the scholarship-granting organizations are expected to prioritize scholarships for low-income students, there are no specific requirements — and since taxpayers making less than $22,150 don’t pay income tax, they would not benefit from the credit. So the poorest Ohioans are excluded, while there is no limit on the income of those who can benefit. Nor is there much in the way of guardrails governing the nonprofit organizations that will grant the scholarships.

The table below outlines many of the new or expanded tax breaks included in the Senate budget bill. Altogether, the state could lose more than $400 million over the biennium, while local governments, libraries and transit agencies might see a reduction of more than $80 million. 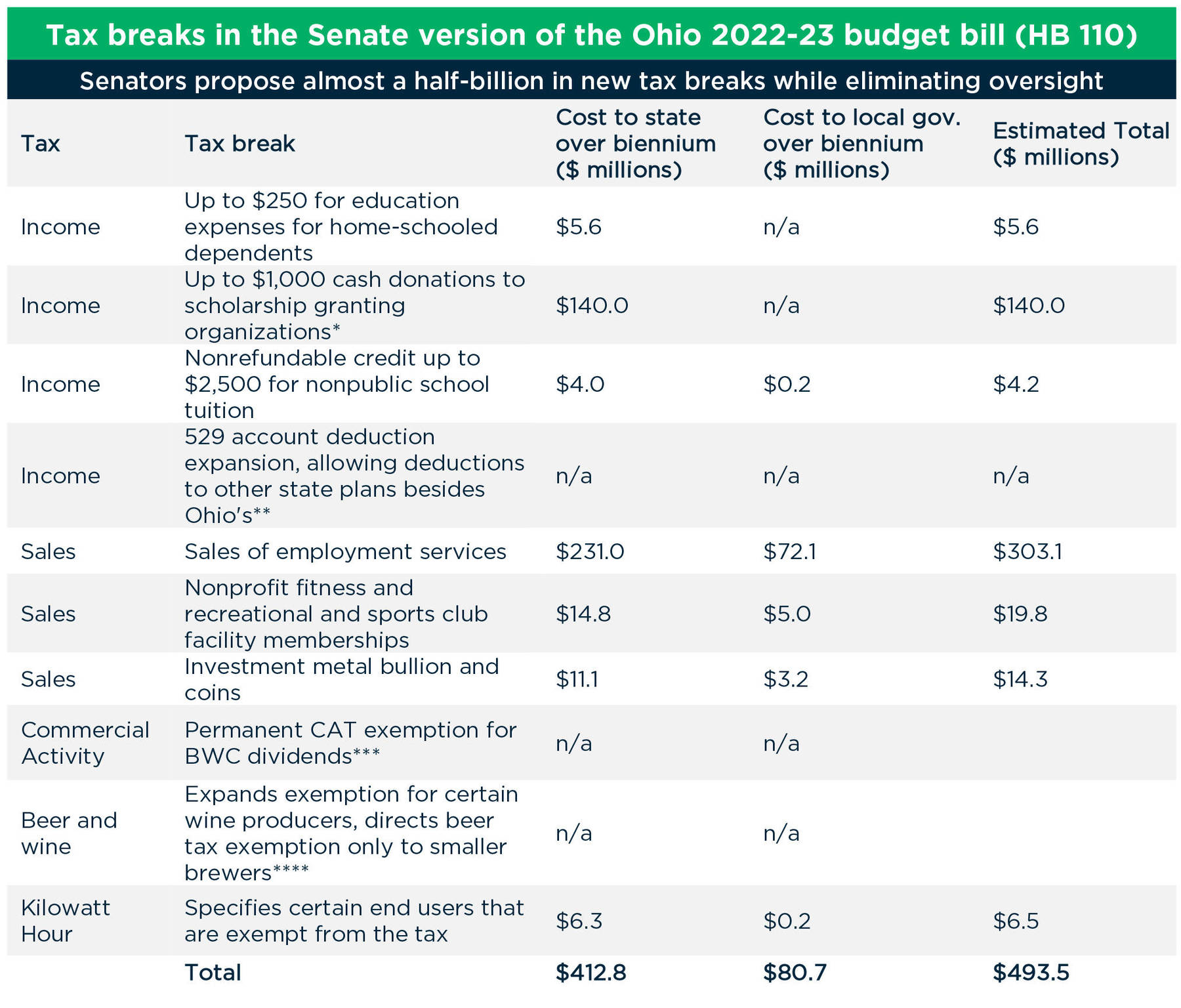 Source: Policy Matters Ohio based on Ohio Legislative Service Commission (LSC) comparison document for Senate budget bill — as passed. Notes: (1) Funds for local government include Local Government Fund, Public Library Fund and in the case of sales tax, counties and transit agencies. (2) LSC provided overall Department of Taxation estimates for the first three education-related credits, and did not break out the cost to local governments and libraries. (3) The Transformational Mixed Used Development credit, the Opportunity Zone credit and the rural business growth tax credit all were extended or expanded in some fashion, but without any fiscal impact on the FY22-23 biennial budget.

* Cost said to be uncertain; range was estimated and upward bound shown.
** Loss estimated to be in the low millions.
*** Loss is "uncertain."
****Described only as "potential GRF revenue loss."

The Senate bill expands a variety of tax breaks for businesses. While they may not create additional costs during the upcoming biennium, they extend credits and ease existing restrictions on them. These include:

This is not a comprehensive list of all the state tax changes in the Senate budget bill, and also excludes changes proposed in local taxes. The Senate bill would repeal the income-tax credit for campaign contributions to certain candidates for state office, saving $5 million to $8 million over the biennium. It scales back the beer tax exemption for small brewers to exclude some larger producers. While it agreed to House provisions on exemptions for investment coins and the kilowatt hour tax, the Senate rejected two new income-tax deductions[12] the House approved in its bill that would cost tens of millions of dollars a year, covering capital gains business owners get from selling interests in their businesses and “venture capital operating companies.”

However, the scope and cost of the tax breaks in Senate bill far exceed those in the House version. At a time when policymakers should be closely scrutinizing tax breaks as Ohio law requires, the Senate instead would put the kibosh on such review. It also would repeal the requirement that business owners tell the state what business they’re in when they claim the business income deduction, a provision approved two years ago after a contentious debate over that $1 billion income-tax break and who benefits from it. (The governor sought repeal but the House budget bill did not include it.)

These anti-transparency moves put special interests ahead of the public. The expanded tax breaks would cost hundreds of millions of dollars in revenue that could be spent on public education or other needed public services. The conference committee and the governor should reject these moves away from good government.

[2] Both the House and Senate budget bills would allow taxpayers who stayed home to work during the pandemic to claim refunds for municipal income taxes. The Senate bill would allow refunds going back to 2020, possibly doubling the harm in the House budget bill, which would only cover one year. A year ago, these lawmakers passed emergency legislation in response to the pandemic. One provision protected cities from loss of their main source of revenue, the municipal income tax, while commuters sheltered in place and worked from home. A year later Senators evidently decided they’d made a mistake and are prepared to order cities to provide hundreds of millions in refunds. The biggest losers are the big cities, but suburban job centers like Solon and New Albany lose; so do mid-sized cities, like Wooster. Affluent bedroom suburbs like Bexley, Indian Hill and Upper Arlington are the big winners. See Patton, Wendy, “Municipal Income Tax Shift Would Hurt Most Ohio Communities,” Policy Matters Ohio, October 2020 at https://www.policymattersohio.org/files/news/103020ritaestimate.pdf

[5] Patton, Wendy. “A Budget for Everyone.” Policy Matters Ohio, https://bit.ly/BudgetForEveryone