Tax breaks drain state resources needed for schools, safe streets, clean water and other basic public services. Ohio, like 33 states including the District of Columbia, offers a motion picture tax credit in an expensive competition for a footloose sector with global opportunities. Following the lead of neighbors Michigan and West Virginia, Ohio’s House of Representatives axed it in the budget bill for 2020-21. The Senate should support the elimination of this tax break.

Movie production is not a public service, but Ohio sets aside $40 million a year for a tax break that funds up to 30% of eligible film production activities. The tax credit can be taken against the commercial activity tax, income tax, or financial institutions tax. Ohio adopted its motion picture tax credit in 2009, but tax incentives for the motion picture industry have been around for a long time. Louisiana was the first in the United States to give the movie industry tax breaks in 1992 and others followed, spurred in part by competition with Canada, where tax breaks to the movie industry date back to 1974. Today states provide a mix of grants, rebates and tax breaks. Nine states have a refundable tax credit where if the value of the credit exceeds the tax liability, the state writes a check to the awardee. Nine allow the value of the tax credit to be ‘transferred’ to a different entity. Ohio and Massachusetts allow both.

The refundable, transferrable tax credit is ‘leaky:’ benefits flow to entities completely unrelated to motion picture production. Refundability gives the value of the tax break certainty and transferability allows the producer to sell it to someone who wants to reduce their Ohio tax liability. These tax credits have become tradable financial instruments; the buyer needs no connection to the motion picture industry. Tax credits go for a lower value than their worth because of certain production-related risks and their value is further reduced by fees paid to the intermediaries like brokers, insurers and attorneys. Producers end up with less than the state awarded, but they don’t mind: they use the proceeds as equity to attract other financial backing. It’s an expensive and inefficient subsidy. A grant would be more efficient, but would be scrutinized as part of the state budget. In Ohio, tax credits are largely invisible expenditures.

A few states dominate the competition to lure the next blockbuster: California’s spends $330 million a year; Georgia paid out $606 million in 2018; Louisiana caps its annual program at $150 million and New York, $420 million (plus a $25 million ‘post-production’ tax credit). An analysis of state share of motion picture activity conducted by Pennsylvania’s Independent Fiscal Office found California, New York and Georgia had 75% of the market in 2016, as they had in 2007 despite big changes in tax credits among the 16 states examined (those with market share greater than .7% - Ohio didn’t make the list), but change in market share barely budged. The study also found gains in some years and losses in others in film-related employment, regardless of the size of tax credit.

Over time, 14 states have ended or defunded their film subsidy. Tourism Commissioner Chelsea Ruby explained why West Virginia ended its movie tax break: “What we’ve seen in the last decade of these programs is a classic race to the bottom….There are certain productions that require specific locations, but a majority of productions can be done anywhere, and those productions always chase the largest credit.” Today, of the five states that border Ohio, three – West Virginia, Indiana and Michigan – have no movie tax credit. 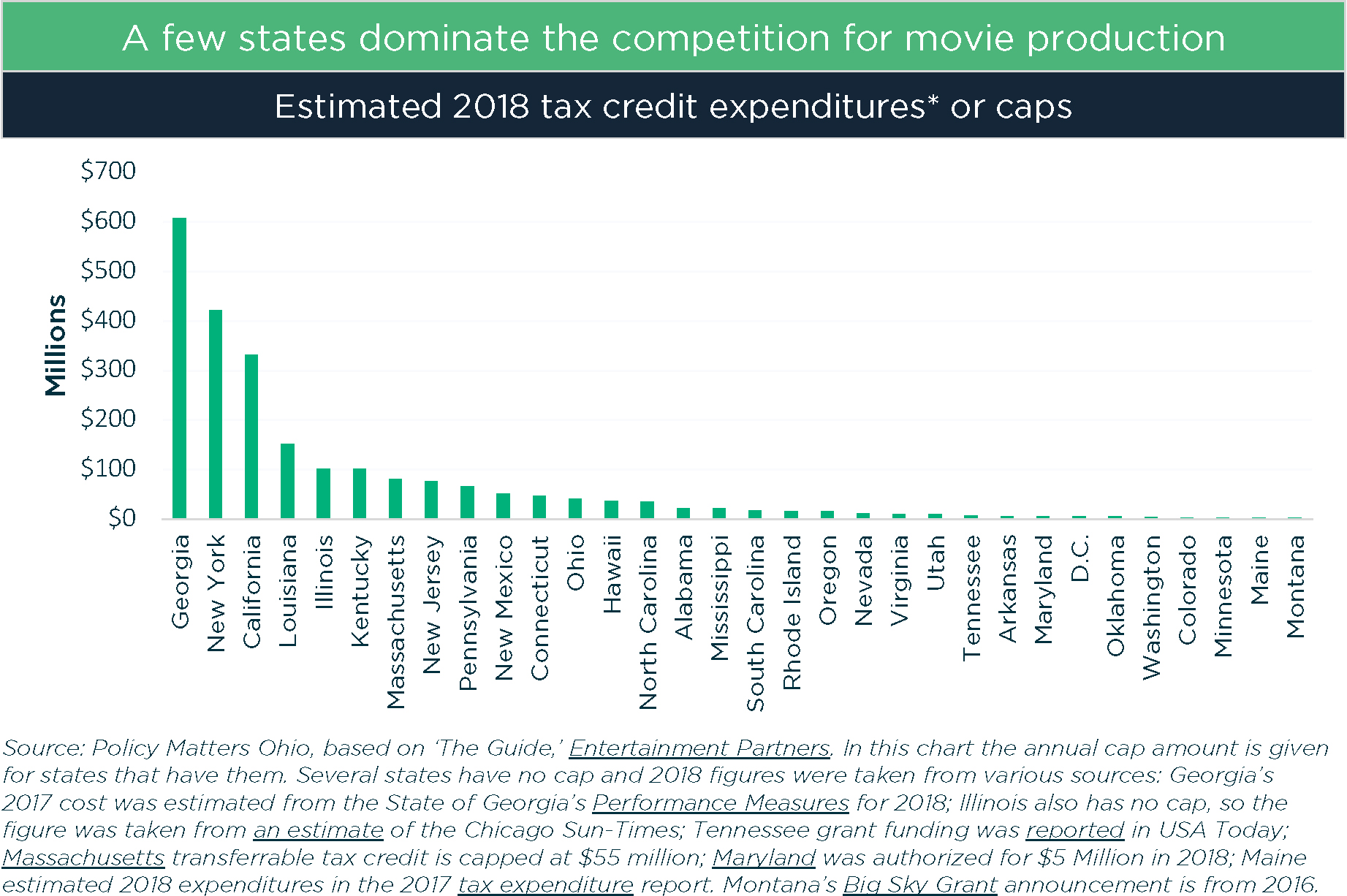 The state budget bill for 2020-21 as passed by the Ohio House of Representatives would eliminate the movie tax credit. At the same time, legislation to expand eligibility and boost the break is under consideration in the Ohio General Assembly. Senate Bill 37, approved at the committee level, would expand eligible production activities and add Broadway theatrical productions as a new category. House Bill 162 would increase the allotment from $80 million a biennium ($40 million in each fiscal year) to $100 million. Pressure to increase spending on this sector is intense: 15 states are presently considering bills to expand their subsidy.

Tax credits are often premised on the claim that the economic activity they generate will more than replace taxpayer dollars given in the subsidy. A study of Ohio’s movie tax credit by Cleveland State University in 2015 found that between 2011 and 2015, the state spent $32 million on the tax credit, and total taxes generated by the economic activity amounted to $22 million: $15.4 million in federal taxes and just $6.7 million in state and local tax revenue. The Ohio tax credit is not paying for itself. Other studies in other states find the same results.

Ohio has pressing needs for public investment, from stemming the drug epidemic to preventing infant mortality; fixing the unconstitutional school funding system to making college affordable. Taxpayer revenues should be used for public services that benefit everyone, not for special tax breaks. The House is right in eliminating this tax break. The Senate should concur.