Tax plan does nothing for the poorest, could cost double what’s estimated

The 2022-23 state budget presents Ohio lawmakers with an opportunity to rebuild communities so all people, no matter what they look like or how much money they have, can thrive and succeed. But instead of using all available options to support communities, the Ohio House Republican majority proposed a budget that would cut income taxes by 2%. A new analysis shows that the benefits of the cut would go largely to the most affluent Ohioans, without doing anything to help Ohioans making less than $22,000 a year.

That’s the key conclusion of an examination of the tax cut prepared for Policy Matters Ohio by the Institute on Taxation & Economic Policy, a Washington, D.C., nonprofit with a sophisticated model of state and local tax systems. The tax cuts could cost the state double the $380 million legislative staff have estimated over the next two years because the American Rescue Plan Act (ARPA) approved by Congress last month requires that states adopting net tax cuts pay back an equal amount of ARPA funds. The $380 million would be better spent on Ohio’s people and communities. For instance, that could include accelerating implementation of key components of the Fair School Funding Plan, expanding the number of families assisted by the public child care program, boosting support of kinship care families or strengthening Ohio’s weak and underfunded local public health system.

In 2020, taxpayers with income of less than $22,150 did not have to pay Ohio income tax, a figure that would rise to $22,400 under the House bill. Though these taxpayers on average pay a larger share of their income in overall state and local taxes than the most affluent do, none of them would benefit from the 2% cut. Altogether, the three-fifths of tax filers who are paid less than $61,000 a year would get just 7% of the total tax cut. Those in the middle fifth of the income spectrum, making between $40,000 and $61,000 a year, on average would pay $7 less a year. Nearly half of the tax reduction would go to the top 5%, who are paid more than $205,000, with the top 1%, who make at least $490,000, averaging a $612 cut and getting nearly a quarter of the tax savings. The table below shows how tax filers in different income groups would fare under the House bill. Though most taxpayers would get small if any benefit, the hundreds of millions of dollars in forgone revenue could meaningfully boost public services: 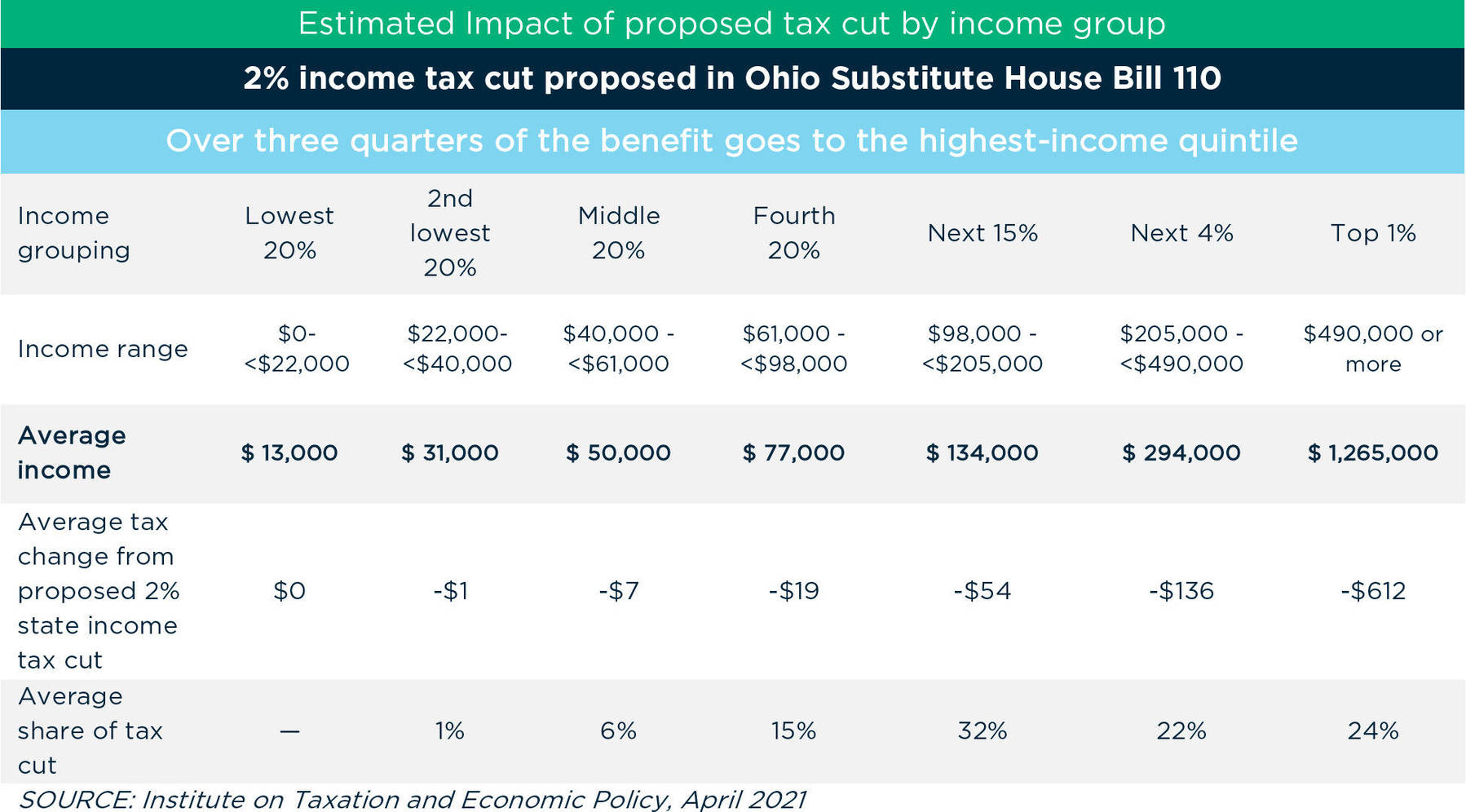 Ohio policymakers have cut the state income tax by more than a third since 2005, while sending $1 billion a year to businesses owners in the form of a tax deduction. Together with other major tax changes, this has reduced tax revenue by $7 billion a year. Tax filers in the top 1% received more than a $40,000 a year in tax cuts on average from these previous changes, while middle-income taxpayers averaged a $14 tax increase and those in the bottom fifth of tax filers paid an average of $126 more.[1] Ohio’s economy has underperformed the nation over that time period, adding relatively fewer jobs. Ohio’s upside-down tax code also falls more heavily on Black and brown families, which flat-rate income-tax cuts will exacerbate.[2] Tax cuts, in short, are a failed policy in Ohio.

Tax cut could be costly

The tax cut also could turn out to cost double the $380 million announced by its sponsors. Under the terms of ARPA, which provides Ohio with $5.6 billion in direct state funding, states that cut net taxes will have to pay back an equal amount of ARPA funds to the federal government.[3] Supporters of the tax cuts have claimed that they aren’t being financed with ARPA funds, while Attorney General Dave Yost has sued to have that portion of the federal law overturned.[4] However, the language in ARPA says states and territories shall not use their portion of the funds “to either directly or indirectly offset a reduction in the net tax revenue of such State or territory resulting from a change in law, regulation, or administrative interpretation during the covered period that reduces any tax (by providing for a reduction in a rate, a rebate, a deduction, a credit, or otherwise) or delays the imposition of any tax or tax increase.”[5] Guidance from the U.S. Department of Treasury will establish what is covered by this language, but it’s quite plausible the 2% rate reduction could be covered. That would make the rate cut expensive indeed.

A better use of funds

The crowning achievement of the House budget bill is inclusion of the Fair School Funding Plan, which would make the state school funding system constitutional again for the first time in 24 years. This is a real step forward. The plan, already under consideration as House Bill 1, would link state funding to the actual cost of educating a student, providing school officials the certainty they need to plan for school staffing and services. It would also fix inequity of the state funding system by targeting additional resources to schools serving communities where many students are experiencing poverty, a significant barrier to learning.[6] As envisioned in the House bill, the plan would be phased in over six years and the additional funding for economically disadvantaged students would be delayed. The $380 million tax cut, which will provide nothing to many Ohioans and just a handful of dollars a week on average to the middle-income residents, could be used instead to accelerate implementation of the plan.

A leading reason many women are not returning to the labor market is a lack of child care.[7] The executive budget increased the earnings ceiling for initial entry into the public child care program to match the threshold for Medicaid health coverage – 138% of the federal poverty level. More could be done. In the past, lawmakers provided assistance to families earning up to 200% of the federal poverty level,[8] the threshold at which families need, and can access, food banks. The $380 million in tax cuts could be used to help more Ohio families with the high cost of child care and allow more women to return to work.

The governor’s proposed budget eliminated the kinship caregiver program, which offers one-time stabilization expenses, such as beds for children, and short-term reimbursement for child care to kinship caregivers with low incomes. The House Substitute Bill uses $10 million annually in federal dollars to restore the program. While this change is welcome, Ohio still provides far more financial support for children placed in foster care than for children placed with a relative or family friend, known as kinship care. Ohio is facing a lawsuit for failing to come in compliance with a court ruling to fund kinship caregivers at the same level as foster care providers; legislation passed quickly last year provides initial funding, but is insufficient.[9] The $380 million in tax cuts could be used to create the kind of program the thousands of kinship caregivers in Ohio need to take care of children in crisis.

Gov. DeWine himself called out the flaws of Ohio’s fragmented public health system and outdated information technology that hampered a coordinated response to the pandemic. Ohio ranks 4th lowest in the nation for state support of public health.[10] DeWine’s budget and the House version both fund the line item for local public health agencies at about $11 million over the biennium, but in 2019 the Ohio Partnership for Public Health evaluated the funding needs of Ohio’s public health system and called for $93 million annually to develop a basic and uniform capacity and capability across the 113 local agencies responsible for this critically important service. The $380 million tax cut could be used to ensure this level of funding for local public health agencies now and into the future.[11]

These are just a few of the ways that the $380 million could instead be used to boost Ohio families and communities. Legislators should take heed, take the 2% rate cut out of the budget bill and consider them instead.

[1] Patton, Wendy, “Rebalance the income tax to build a better Ohio for everyone.” Policy Matters Ohio, Oct. 15, 2020, at https://www.policymattersohio.org/research-policy/quality-ohio/revenue-budget/tax-policy/rebalance-the-income-tax-to-build-a-better-ohio-for-everyone

[3] Some news accounts have said that ARPA prohibits states from cutting taxes. As Treasury Secretary Janet Yellen has pointed out, that is incorrect. “It simply provides that funding received under the Act may not be used to offset a reduction in net tax revenue resulting from certain changes in state law,” she said in a March 23 letter to the Arizona attorney general and other AGs. Treasury Secretary Janet L. Yellen Response to State Attorneys General on Implementation of Section 9901 of the American Rescue Plan Act, at https://home.treasury.gov/news/press-releases/jy0075

[10] Filby, Max, “Ohio spends less per capita on public health than nearly every other state,” Columbus Dispatch, April 2020 at https://bit.ly/31FYPvO

Tax plan does nothing for the poorest, could cost double what’s estimated