Governor John Kasich’s new tax proposal would further reinforce the shift in Ohio’s state and local tax system in favor of affluent residents and against those with lower or middle incomes. Under the plan, Ohioans who made under $56,000 last year – those in the bottom three-fifths of the income spectrum – on average would pay more tax than they do now. Meanwhile, those in the top 1 percent, who made more than $457,000 last year, would average an annual gain of $2,412. 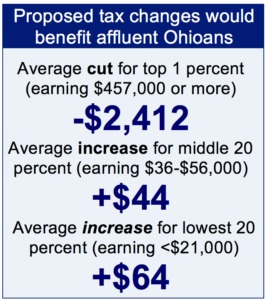 Those are among the key findings of an analysis done for Policy Matters Ohio by the Institute on Taxation and Economic Policy (ITEP), a Washington, D.C.-based research group with a sophisticated model of the tax system.

The plan is included in Governor Kasich’s budget bill. It features an overall reduction in the income tax, the only major tax based on ability to pay, of 17 percent. It would pay for nearly all of the income-tax reductions, largely with increases in sales, tobacco and severance taxes. On average, ITEP found, taxpayers in the middle fifth, who made between $36,000 and $56,000 last year, would see an annual increase in taxes under the plan of $44.

Table 1 provides the breakdown of the overall impact of the major changes in the Kasich proposal:

Kasich’s plan would cut the number of brackets, while reducing rates, in Ohio’s income tax. It also includes increases in the personal exemption and a boost in the credit that currently wipes out any tax for those with less than $10,000 in annual income. ITEP modeled these changes, together with the increase in the sales tax rate, to 6.25 percent from 5.75 percent; broadening the sales tax base to include lobbying, cable TV subscriptions, non-medically necessary cosmetic surgeries and other services; a 65-cents-a pack increase in the cigarette tax; and an increase in the Other Tobacco Products tax (see data note for details on what the analysis covers, including those elements of the plan it does not include).

Kasich Administration officials have boasted about how many Ohioans won’t have to pay income tax as a result of the plan.[1] However, 1.5 million tax filers don’t have any tax liability already because of the existing rate structure, credits and deductions. They will not benefit from the plan—and many are among the poorest Ohioans. Even apart from that, the state income tax is not the major state or local tax most affecting low- and moderate-income Ohioans. As previous analysis from ITEP has shown, sales and excise taxes in particular fall more heavily on lower-earning state residents than the income tax does. Middle-income nonelderly Ohioans paid about 10.6 percent of their income in state and local taxes in 2015, but only 1.6 percent of that was for state income tax.[2] For those in the bottom fifth, state income taxes accounted for just 0.2 percent of income, when total state and local taxes amounted to 11.9 percent. Lowering the income tax will do little for low-income Ohioans.

Table 2 breaks out how the income-tax cuts in the proposal would affect those in different income groups. Compared to previous Kasich proposals for income-tax cuts, the current one is somewhat less lopsided in favoring the very richest Ohioans. However, its benefits are still directed heavily to the affluent; the bottom three-fifths of tax filers get just 21 percent of the benefits. And as Table 1 shows, when combined with the tax increases proposed to help pay for the cuts, the gains for low- and middle-income Ohioans vanish: in fact, on average, these Ohioans will pay more.

The biggest tax increase in the governor’s proposal is a boost in the state sales tax from 5.75 percent to 6.25 percent. According to the administration, this would generate $879 million in Fiscal Year 2019. Another $224 million would come from adding sales tax to a number of services for the first time (that also includes applying the higher 6.25 percent rate to those services).[3] Raising the sales-tax rate falls more heavily on lower- and middle-income taxpayers in part because they spend all or nearly all of what they earn, compared to higher earners. Adding to the services the sales tax covers will also do that. However, it is important that the state begin to tax more services so that the tax system covers today’s economy, which is increasingly based on services. Otherwise, the sales tax will gradually lose its ability to generate sufficient revenue to pay for public services. While modernizing the sales tax so it is effective, the state should also adopt measures to protect low-income Ohioans from its regressive effects. This could be done through a sales-tax credit like a number of other states have.[4]

Table 3 shows the impact of the sales-tax increases on different income groups:

Kasich’s plan also includes a 65-cent-a-pack increase in the cigarette tax and a boost in the tax on other tobacco products so it is comparable to the cigarette tax. These increases are worthwhile because of the demonstrated improvement of higher tobacco taxes on public health. However, these tobacco-tax changes fall most heavily on the lowest-income Ohioans. Cigarette taxes are charged per unit, not based on price, and lower-income individuals are more likely to smoke.

Of course, only tobacco users will pay the added tobacco taxes. However, excluding the tobacco tax changes, the proposal remains highly rewarding to Ohio’s affluent, while providing meager benefits most Ohioans. ITEP found that even excluding the proposed tobacco tax increases, the bottom two-fifths of Ohioans on average would pay more under the tax proposal. Table 4 shows the impact of the proposed cigarette and Other Tobacco Products tax increases, as well as the overall impact of the plan not including those changes:

Unlike Governor Kasich’s tax plans in the last two state budgets, this one would not significantly reduce revenue. However, the budget underinvests in crucial services and does not reverse the $3 billion in annual tax cuts approved since 2005.[source:5 ]We need to restore aid to local governments. We need to bolster our investment in K-12 education beyond the modest boost called for in the budget proposal, as well as taking more steps to allow lower-income Ohioans to afford college. Ohio’s dismal state support for public transit needs a substantial boost. Protective services for the elderly, food banks and affordable housing all need more support. These are just a few of our unmet needs.[6] 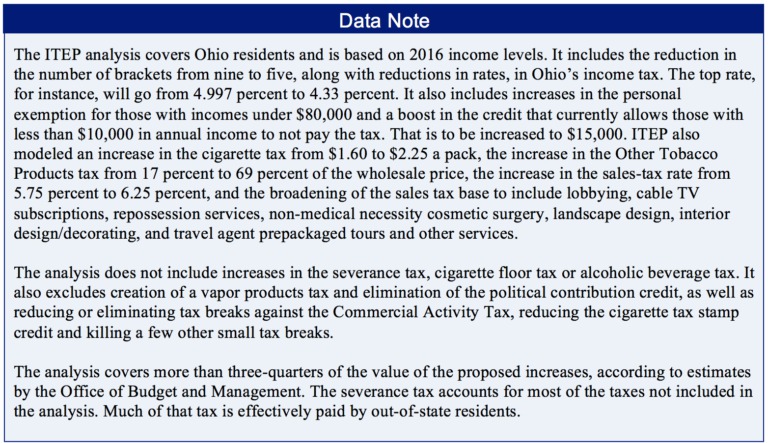 [3] The administration estimates the FY2019 cost of the income-tax cuts at $1.88 billion. See Governor John R. Kasich, The State of Ohio Executive Budget, Fiscal Years 2018-2019, p. B-7 at http://budget.ohio.gov/doc/budget/FY18-19_Budget_Recommendations.pdf