Government is meant to serve and represent the people. It should improve the lives of everyday people. Too many of Ohio’s representatives have lost sight of this mission, devoting themselves to the highest bidder and prioritizing the interests of the wealthy and powerful few rather than the needs of the many. 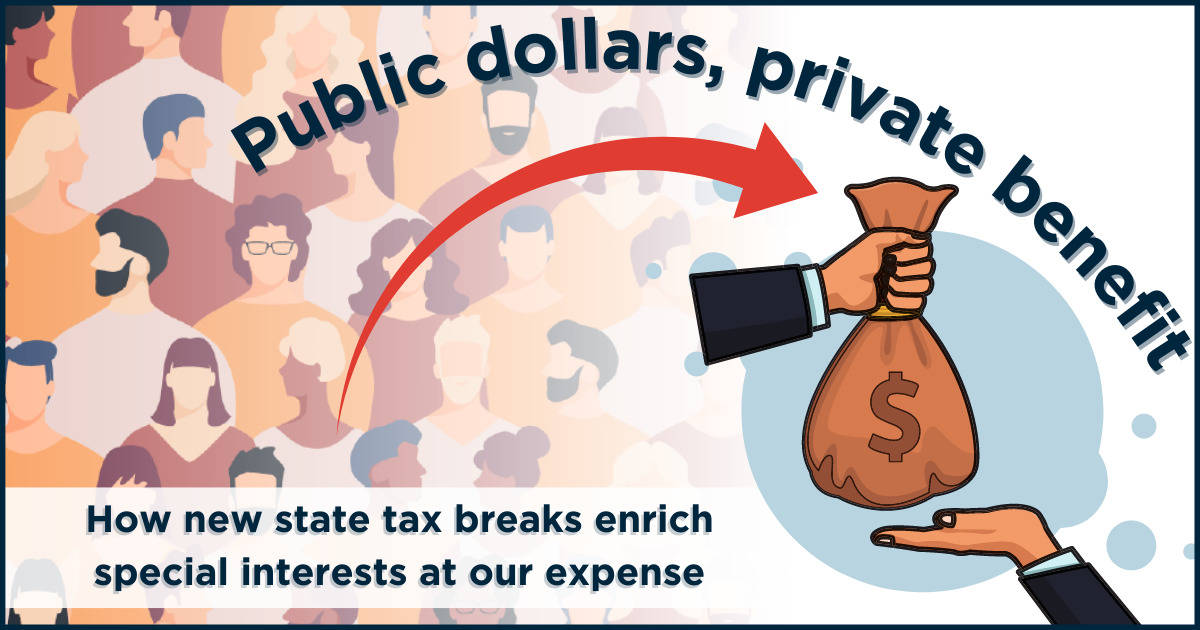 At the behest of corporate interests, some elected officials use tax exemptions, credits, and deductions, also known as tax expenditures, to redirect public funds away from the programs and services that help us all do better and into the hands of wealthy individuals. Thanks to their efforts, 60% of Ohio households with the lowest incomes pay more annual taxes on average than they did in 2005, while the richest 1% of Ohio households contribute an average of around $50,000 less per year.[1]

Some tax expenditures such as the earned income tax credit can uplift regular Ohioans. They can provide immediate relief to parents, to workers, and to organizations serving Ohioans in need. But instead of designing tax credits to support working people and families, legislators have been busy enacting credits that make our tax code more unequal. Since July of 2021, state legislators have passed 14 tax-related bills that will cost, according to estimates provided by the Legislative Service Commission (LSC) and the Department of Taxation, hundreds of millions of dollars a year. The exact cost is unknown. In this blog post, we detail this most recent batch of tax expenditures delivered by the 134th General Assembly. Using official analyses, we describe the content of the bills, what they will cost the state of Ohio, and just how little information we have of how costly they might truly be.

Eight of the tax expenditures enacted since July 2021 will account for most of the revenue loss associated with recent tax-related bills. The table above uses estimates provided by the LSC to depict the fiscal impact of these bills in the coming years.

The largest new tax breaks approved by the General Assembly in the past year were set for Intel Corp. and its suppliers for the corporation’s planned semiconductor plants outside Columbus. Days before final approval and with little public input, the legislature added these previously undisclosed measures into the capital budget bill, House Bill 687, which also included more than $1 billion in cash and infrastructure spending supporting the project.[2] Among the added tax expenditures policymakers made major expansions to existing sales-tax exemptions for equipment used primarily in research development and to clean, maintain or monitor environmental conditions where manufacturing takes place.[3]

Another new provision will give both international and state suppliers an exemption from paying the Commercial Activity Tax, the state’s main business tax. Some suppliers also will qualify for more generous property tax exemptions. While we don’t know the final cost of these added tax breaks, according to the LSC they will “decrease state revenues by hundreds of millions of dollars across several fiscal years, depending on the level of investments by the semiconductor business and its suppliers in Ohio.”

Senate Bill 166 encourages employers to employ students in an internship or other technical education program.[5] The bill will give employers a non-refundable personal income tax credit worth up to 15% of students’ total wages up to $5,000 per year.

Senate Bill 246 gives owners of pass-through entities a way to work around the federal limit on the state and local tax deduction approved by Congress in 2017.[6] Pass-through entities are businesses such as partnerships and S Corporations whose yearly profits are passed on to their owners and taxed as individual income, rather than at the level of the business itself.[7] The law will create an ongoing loss, the LSC said, by reducing the tax rate from 3.99% to 3% in tax year 2023. The estimated revenue loss is based on the number of taxpayers seeking refundable credits, and the loss could be less, depending on how many passthrough entities opt to pay the new tax.

Senate Bill 225 increases the amount of historic building rehabilitation tax credits state officials can award in fiscal years 2023 and 2024.[8] The bill also siphons more resources from Ohio’s communities to give to wealthy investors by expanding Ohio’s opportunity zone tax credit. SB 225 increases the credit cap from $50 to $75 million for the 2022-2023 biennium, moves to an annual cap of $50 million in fiscal year 2024, and finally $25 million in subsequent years. Congress and the Trump Administration created opportunity zones by passing the federal 2017 Tax Cuts and Jobs Act.[9] The zones are designated census tracts where individuals and corporations can get large capital-gains tax breaks for investing in economically depressed areas. However, while these credits have been a boon for wealthy people, they have been proven to do little for low-income families and communities.[10]

Senate Bill 57 authorizes a property tax exemption for housing used by people diagnosed with a mental illness or substance abuse disorder and their families.[11] This first provision, which provides a modest benefit to Ohioans with significant need, will cost Ohio’s local governments between $15 to $32 million a year. The second provision will allow people to file complaints against property tax valuations if there was a value reduction due to COVID-19-related circumstances. According to the LSC fiscal analysis, this provision could result in sizeable revenue losses ranging up to tens or hundreds of millions of dollars statewide.

Another six bills mostly alter various provisions and administrative processes. Each on their own, won’t cause any major state revenue losses. Yet together they contribute to the ever-growing list of tax expenditures enacted by state legislators, and some could significantly reduce local tax collections.

House Bill 228 could incur high costs, as it allows pass-through entities to deduct certain retirement benefit payments for municipal income tax purposes.[13]This will reduce the income tax revenue for municipalities, but there is no estimate for how drastic this reduction will be.

House Bill 126 makes it more difficult to challenge property-tax valuations, which will reduce revenue available to school districts, though the amount is not clear.[14]

It is necessary for state lawmakers to increase equity and transparency in the Ohio budget. Hundreds of millions of public dollars are lost yearly to unregulated expenditures that benefit a limited group of people in Ohio while taking funding away from necessary programs. To increase transparency, lawmakers should release reports stating the beneficiaries of each new or expanded tax expenditure, accompanied by an accurate and precise analysis of revenue losses and where it will impact the state specifically so that taxpayers know where their money is being redirected.

Ohio policymakers don’t regularly review state tax expenditures, allowing hundreds of millions of dollars to slip through the cracks every year. The revenue loss from tax expenditures directly impacts crucial public institutions and programs, such as K-12 education, higher education, Medicaid, child care and mental health and addiction services. The state releases a tax expenditure report, though it only contains brief explanations of each tax break and the amount of revenue forgone.[15]

Ohioans would be better served if state officials conducted an examination into the specific beneficiaries of each tax expenditure. Policymakers should reinstate the Tax Expenditure Review Committee, which the General Assembly eliminated in 2021. The committee would review tax expenditures in the state budget and propose cutting out unproductive exemptions and credits to ensure Ohioans have the resources needed to thrive. Furthermore, every expenditure should have a sunset that forces state legislators to re-examine expenditures rather than allow them to drain Ohio of much-needed funds indefinitely.

State lawmakers must do a better job of protecting Ohio’s vital public revenue by including more guardrails when they propose tax expenditures. Better yet, rather than concealing policy initiatives within tax expenditures, legislators should fund programs directly through spending in the budget. That way, the public can get a chance to scrutinize the programs when a new budget is passed every two years.